For my fig experts, how deep should I plant a cutting? If I have 3-5 nodes, do I only leave a node or two on top? I just put these in yesterday, should I bury them deeper for greater success on rooting? Most have a node or two buried. I also am trying the method of making a small cut towards the bottom of the cuttings. Then I applied rooting hormone. 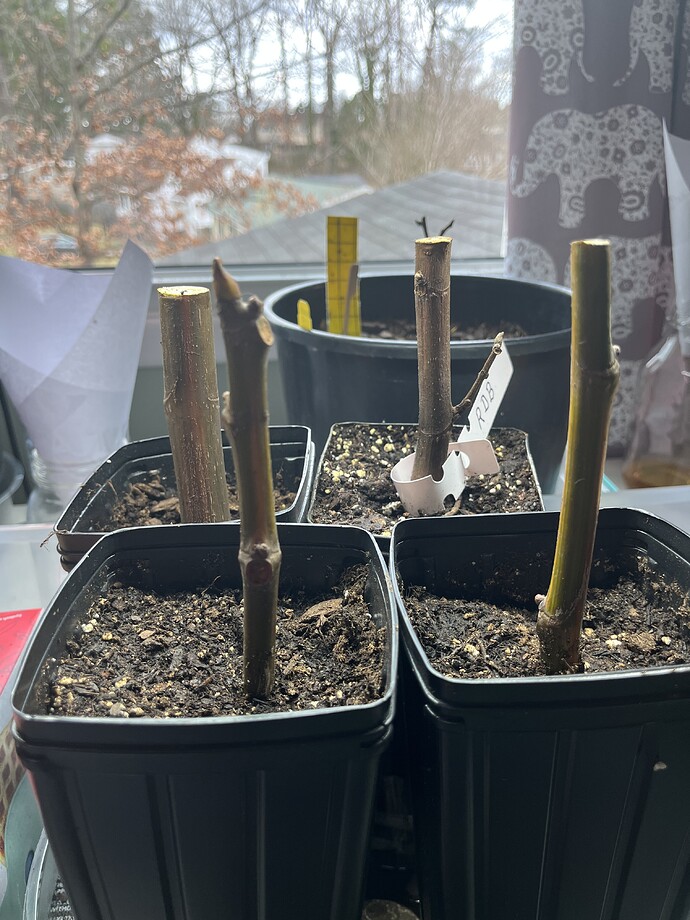 Based on my limited experience, your depth is probably fine. The thing to watch out for the most for me is not getting mold or fungus growth in the soil. I’ve begun microwaving optisorb and coconut coir to keep things as sterilized as possible.

The depth looks fine, but you’ll want to monitor moisture. It’s hard to say from a picture, but it looks to be a bit too wet. You want moist, but not wet soil. Too much moisture is bad for any plant, but figs are really at home in arid and semi-arid environments and should be treated accordingly.

Not an “expert” by any means, but when rooting in tall tree pots, I usually leave only a couple of buds at the top—maybe only one, if I’m dealing with a cutting with long internodes. In a shallower container—or with a very long cutting—I leave more wood up top, as I don’t want the base of the cutting to be near the bottom of the container where water will settle. Of course, I agree with Ryan and Jay that what you’ve done here looks fine; figs are not that temperamental.

Some things I’ve noticed/learned in the past few years of rooting fig cuttings:

1.) As Jay says, watch the water. Resist the temptation to water these again until they feel light and the top is bone dry more than an inch down. Use of a well-draining medium (I often use Pro-Mix HP; BX also works well) helps. I usually water my treepots + medium until they start to drain, then let them sit draining for a day or two more before inserting cuttings. Depending on indoor heat/humidity, I usually don’t water again for a month or more; and then only a little—by which I mean a brief bottom watering, and maybe a couple of tablespoons up top. When they’re rooted and growing in earnest you don’t have to be as careful.

2.) You might consider tightly wrapping the exposed tops with parafilm—or at least sealing apical pruning cuts with something like wax. If your indoors conditions are dry, the tops of the cuttings can dry out before rooting occurs.

3.) Fig cuttings like warm soil. I usually like to use a heating mat, set to around 80F. They’ll root in the 60s even, but it will take longer; and the longer a cutting sits there, the greater the chance of failure.

4.) To repeat what Ryan said, “clean” soil is a good idea. You especially don’t want to leave fungus gnat eggs in there—because in addition to the adults being an annoyance, the larvae of some species will actually feed on young roots and can cause failure in seedlings and cuttings. With most potting mixes, a bout in the oven or microwave certainly wouldn’t hurt. If I use baled Pro-Mix I don’t usually bother, as it doesn’t tend to have fungus gnats and it’s often inoculated with bacteria and beneficial fungi I don’t want to kill. Even so, when wetting it down, I usually put some spinosad and Bti in my water—just to be safe.

5.) If you got these cuttings from someone else, strongly consider applying a few courses of a miticide that will kill eriophyid mites, beginning at budbreak. Such miticides include abamectin (commonly available as Avid; there are also generic versions), spiromesifen (very good—but expensive and now hard to find in small re-bottled portions), and (organically) spinosad (at high rates) + sulfur. Fig bud mites are a real pain—and they get around.

Depth is probably fine, but as @JeremiahT also says I usually only leave a bud or sometimes 2 above the soil which means pushing them down until the bottom of the cutting is almost at the bottom of the pot unless they are small cuttings. Buds do grow from below the soil line sometimes, so that doesn’t stop them and putting them deeper keeps more of the cutting in a moist area where it is less likely to lose moisture to the air.

Rooting figs (and most everything else) is a race between success and the two paths to failure, which are either the cutting drying out and dying or dying from rot, mold, etc. If you avoid getting the media too moist and keep the cutting from drying out, you usually get close to 100% success.

By the way, I often cut off terminal buds or any small branches with buds, since they are likely to break earlier and I want to have plenty of time for root development before there is top growth to support. Covering the open cuts with wax, parafilm or even plastic wrap helps reduce moisture loss as well.

Of course there are many ways to root a fig…

Of course there are many ways to root a fig…

Yes millions! I use pure DE, I always liked that method. Near impossible to overwater.
Whatever works for you. 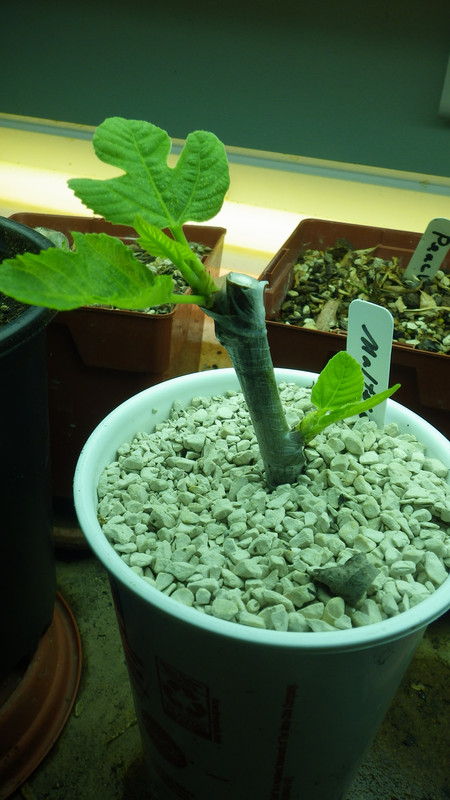 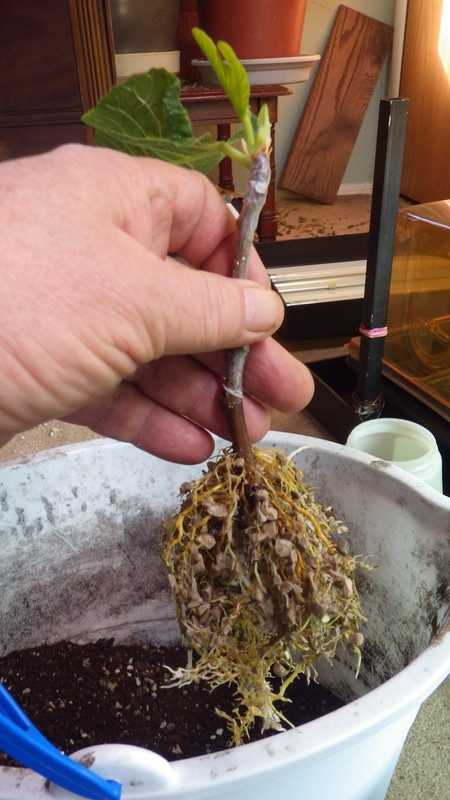 I plant mine deeper when I can. If the nodes are spaced out I leave one node exposed. When they are closer, I leave 2 nodes. Gives you more area for rooting and less wood exposed to drying out.

Just be aware of the fig cutting sudden death syndrome. Some very healthy rooted cuttings can suddenly die at about 5-6 weeks mark. Leaf wilting and branch tip drying. There are various theory for this. Some say the cuttings run out of energy at this stage. Some say it is too much moisture, fungus gnat or dry air.

I think this can be a combination of all the above. When rooted cuttings transit from warm and humid environment to cooler and dryer condition, they undertake stress. If they can’t make enough food before energy runs out, they can die.

I believe the cuttings rooted inside greenhouse or outdoors have much higher success rate due the absence of sudden change of environment.

Like to hear other theory or experience with this.

I used some very common fig cuttings to practice this winter. I still lost some cuttings after they have successfully rooted.

Thank you everyone, you all gave incredibly helpful information!

I put some extra medium in the bottom of my container and pressed my tree pots into that some… so the bottoms of my pots have extra medium in between and all around. Hopefully that will help with moisture retention and less need to water.

I have my temp probe pressed into that extra medium down around where roots should develop.

So far so good… quite boring at this stage. 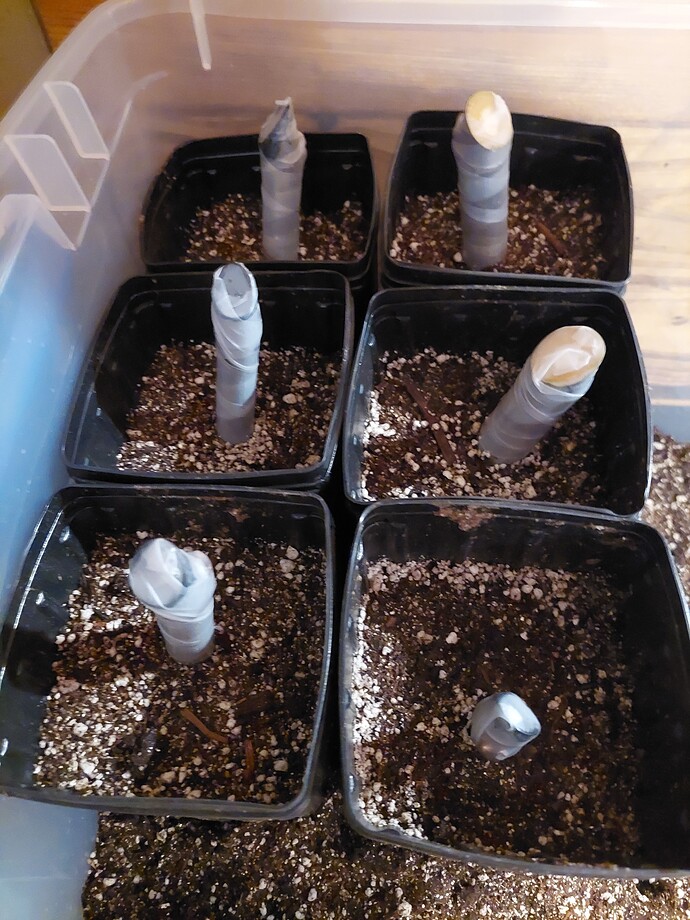 Question on when to water…

Is that when to give some water ? Or should you let them feel mostly dry for a few days before watering ?

Sitting on that bed of potting mix it will wick down out of the pots. And with the heat mat, you’ll have more evaporation. I would actually pick a pot up and if it looks slightly moist at the bottom you are probably still good, but if it is dried out or almost dried out I’d give a little to each. I generally don’t have to water for at least 2 weeks, but mine just sit in the basement at about 65 degrees.

I had that happen last year- probably fungus related for me. I

pure DE, I always liked that method. Near impossible to overwater

This is what I have done now- and it works great. Fertilizer at 1/3 to 1/2 strength when plants get old enough to start showing roots. The plants seemed to transition to standard potting soil quite well. What I have going probably won’t get soil until 3 months or more.

It looks like I will have to water about once a week while on the heat mat. They are already quite dry under the pots.

I was planning to give them 4 weeks on the heat mat (no sun light) then transition… off the heat mat over to my south facing basement window for some sunshine.

New grow light for fig cuttings, than figs will be replaced with pepper and tomato. Some pepper seeds hs already started to grow. Have a pretty amount of seeds on hand. Might be an interesting year in the making. The Rehza Macedonian showing good grow. New small cheap grow light showing promise.
Also start a few rose cuttins 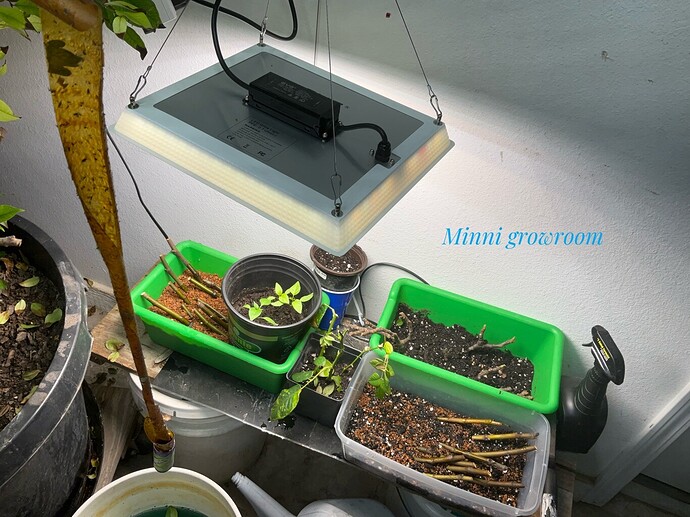 Do you rinse/sift the DE to remove smaller particles? Does it make a difference?

It is probably best if you do. Although I do not do it. I use optisorb brand which has the largest particles I have seen. When I water them I keep the water. I use it on my other plants to increase the silicon in the soil. Silicon is sold as a supplement and studies show excess silicon even though most soil has plenty, supplements have shown to increase the amount of nodes, and root mass.
On another subject one guy I know did see sudden death a lot using DE. I have done about 150 rooting with it and have had only 2 die. I feel once roots are well formed best to remove them. Mine have dried out and in general struggled if left in too long. No food in this mix so make sure to feed once rooted.

This is my first year rooting figs. I started some the end of November with a variety of methods.

I harmed some of these when I was traveling 2 weeks with the tote slightly cracked to prevent rot and not giving additional water while rooting was occurring. So I can’t rate one method versus another directly.

DE (filtering out dust with a piece of screen) has worked fine and aside from some dried out cuttings while away most recovered when watered on return. Growth is slower as I’ve tried to avoid overfertilization with Miracle Grow. Moving from 16 or 34 oz clear cups (great for seeing root growth) to 4x9 tree pots has seen a few deaths.

Direct potting in pine fines mix worked consistently though some mold appeared when wrapped in a bag. One I-258 lost its leaves and is not looking great after about 8 weeks. Another couple are around 12 inches of growth. Another couple have lesser growth but are looking good.

The last method I’ve used is based on the Unified method seen on Ourfigs. The bottom of the cup is filled with pine fine mix or coco coir with some osmocote and perlite mixed in. I use a toilet paper cardboard roll surround it with coco coir and perlite. In the cardboard roll, I put a layer of DE over the mix, stick the cutting inside and fill it with DE and then remove the roll and cover more DE across the top. This is also how I’ve done all the single node cuttings with 100% success rate for now.

I’ve only rooted figs once, last year, using the DE (Optisorb) method from OurFigs. It is foolproof, but as mentioned above, sometimes even well rooted cuttings croak. 1/3 → 1/2 strength fert after roots develop. Styrofoam cups when you see roots to protect from light. Cut leaves off if roots aren’t well developed. Give them plenty of sun when the leaves and roots are balanced. I rinsed the Optisorb a couple times, after filling the cups. Like mentioned above, watered over a bucket to collect the runoff DE dust (and fert) and poured on other plants. 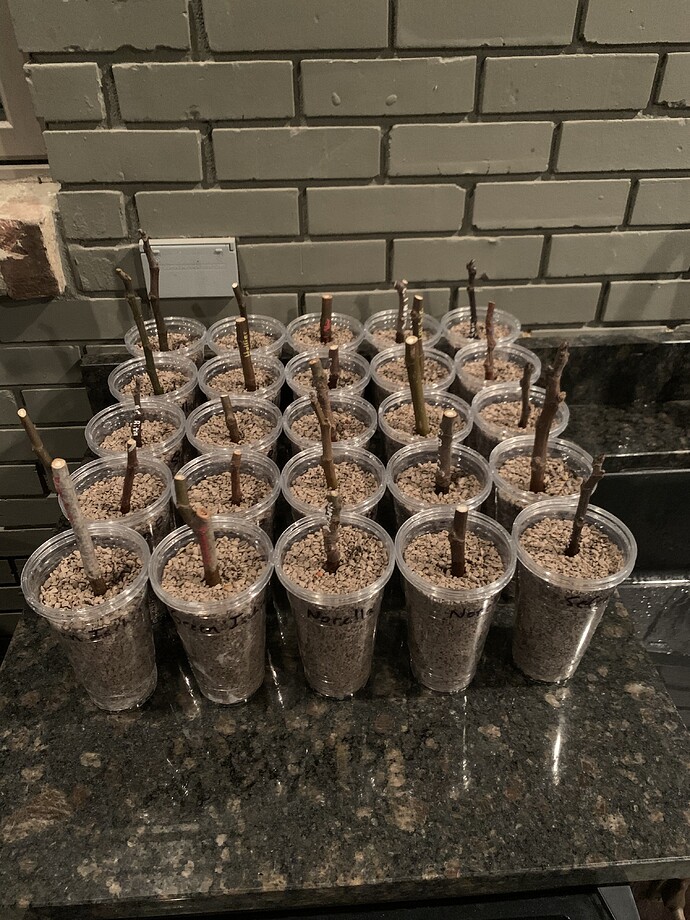 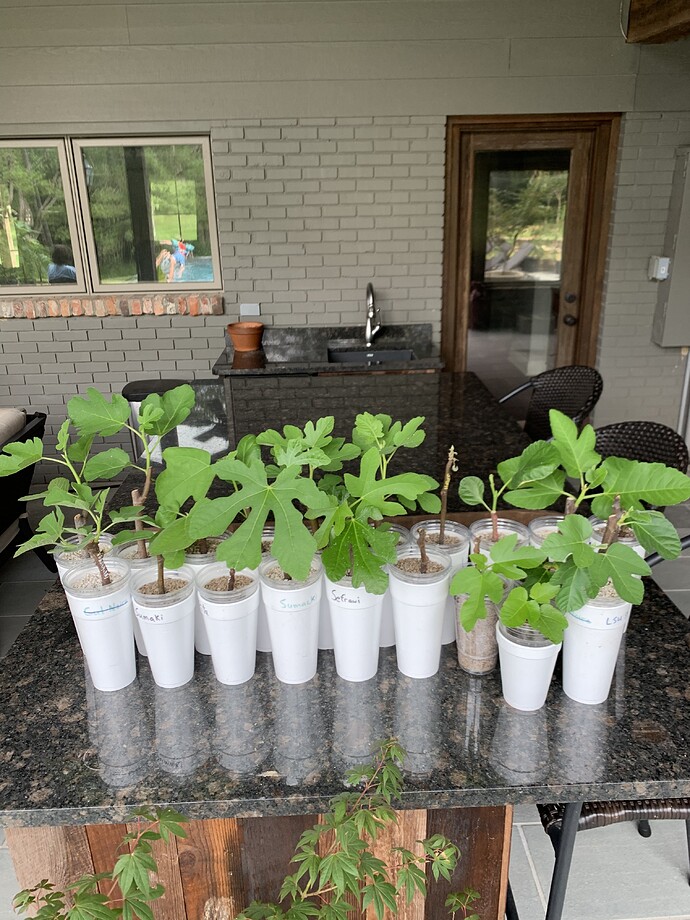 I’m a big fan of the fig pop method, because moisture management is almost a non-issue if you get it correct at the beginning. I’ve got one just pushing roots now at about 3 weeks, feels like magic every time. 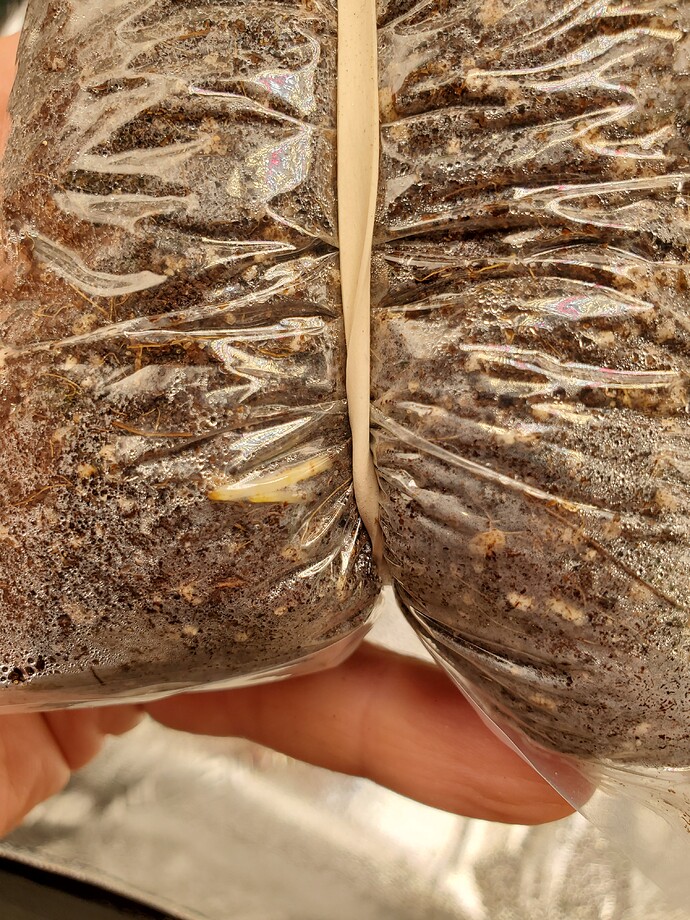