Is anyone growing Russian Olive (Elaeagnus angustifolia)? It is also sometimes called Silverberry, although this name is more used for a different species. Anyway, I am trying to get a hold of a variety or cultivar with large/tasty fruit. I have heard a little about a variety called “King Red” or “Red King”, something like that. Does anyone know of anywhere I might be able to buy this, or something like it? It is I am also interested in good Elaeagnus orientalis varieties. I hear E. orientalis is very similar and may even be a subspecies of E.angustifolia. I think it might be called “Trebizond Date”.

I bought some dried Senjed / Oleaster (from Afghanistan by “Ariana Sweets”) in an international grocer here in the states and liked it a lot. It is said to be Eleagnus angustifolia, so that is why I am now interested. And Russian Olive doesn’t seem to be a problem at all where I live, as far as being invasive.

I can try planting the seeds, but am not sure if the drying process “killed” them off, or if they are irradiated in the shipping process.

So does anyone know anything about all this?
Is anyone growing Russian Olive (Eleagnus angustifolia)?
Does anyone know of anywhere I might be able to buy good varieties or cultivars? 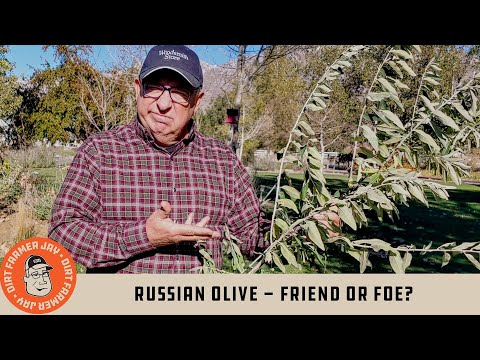 The benefits you see in them are most likely the benefits saw in them when they imported them to this country. The government saw issues and declared them an invasive.

Then they change their minds, call for their banning (then get a pay raise instead of getting fired).

It’s almost comical. For it’s bound to happen again and again…as it has in the past 90 years or so. The stray plants individuals bring in (legally or not) have not caused as much ‘invasiveness’ as those once recommended by university extension or the USDA.

I understand that Russian Olive is invasive in many parts of the United States. But around where I live it is not a problem. I have never seen an Russian Olive tree, although I have seen plenty of Autumn Olive. Russian Olive is not listed as “widespread” in my state. It is not even listed as “Locally Abundant”. It is listed as “Isolated”. So I am not too concerned about trying to grow it.

Hugely invasive in New Mexico. Introduced in the 1930s for erosion control purposes. I cut them down by the hundreds with a string trimmer every year.

I have to admit: Works great to prevent erosion. Gnarly tree. Fragrant flowers in Spring. Thorny. Don’t plant it. You would regret it.