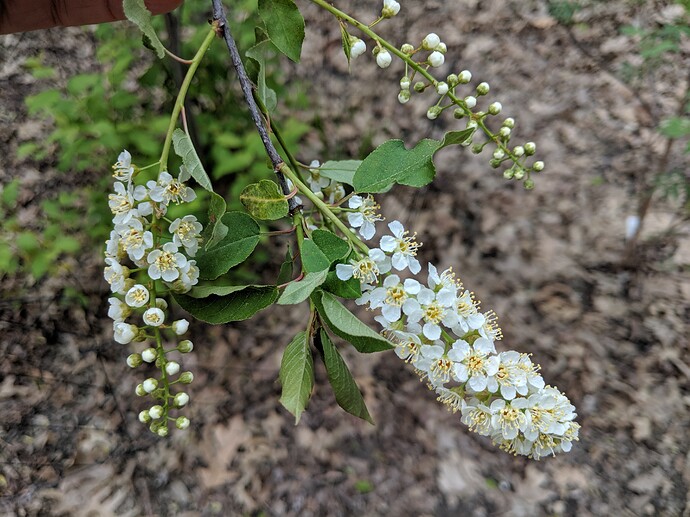 Why the Bradford pear tree is now banned in Ohio

Bradford and other callery pear species have been banned for sale in Ohio. Plenty of native replacements can provide spring blooms in your Northeast Ohio garden.

Fortunately everywhere in Pennsylvania all you have to do is drive on a highway to dig up your own rootstock!

Callery pears are a host for fireblight.

Good to know. I’ll be grafting mine very low.

I’ll be grafting mine very low.

All pears can “host” fireblight.

Interesting. We have flower pear along the streets. I have seen many little pear dropped around the base of the tree but have never seen any seedings come up

Callery are a host for many diseases when they are not cared for. They dont have fireblight here but they can host rust. People need to graft them over or irradicate them in most states. @Richard is taking care of his pears but the city has their callery which have fireblight so i wouldn’t like that much either. Depends on what the genetics are as to what diseases they have. My many orchard trees i’ve purchased through the years have at least half been on callery. All these years later they are doing great. The seedlings of callery can turn into weeds so don’t let them flower. The state planted most of our calleries along the highways , parks etc. . Think the idea is noone plant new ones now. If there are wild trees might as well use them. Graft them with some fireblight resistant pear like kieffer etc. . Cannot beat free it’s the best price. Callery have been a great rootstock in Kansas but i only use BET now going forward. All the things that make them fantastic in a poor location is what can make them invasive in some locations. BET is our only good option on my property. Ohxf are to favored by animals.

They dont have fireblight here

They are asymptomatic in your location.

@IL847… I only have to presume that you’ve not really looked… or perhaps, just don’t recognize… callery seedlings in your environs.

This photo (courtesy of Clark) from a discussion thread on Wild Callery Seedlings; you can see this thick mass of young seedlings - undoubtedly the result of mass deposition of seed-laden bird poop from flocks of starlings/blackbirds/robins which have been feeding on the tiny little fruits of the ornamental flowering pears, just like in your own neighborhood. 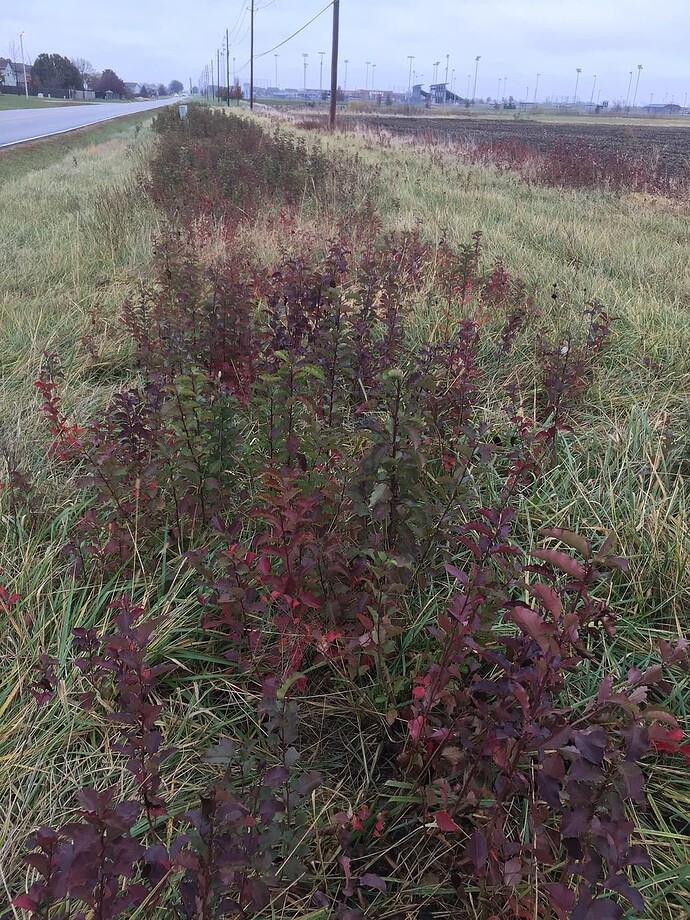 And, if that patch of seedlings were left unmowed/unsprayed, within just a very few years, they would look like this field - a virtual forest of thorny callery pear trees: 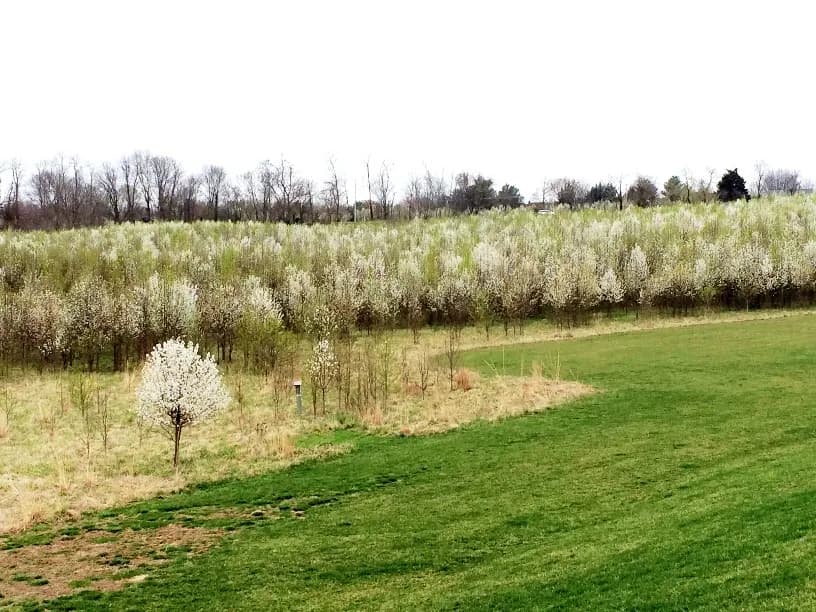 I’ll bet that as you drive the thoroughfares of whatever part of IL you inhabit, you’ll see this sort of display in early spring - all the white is callery pears, and and nary a one of those was planted by a person: 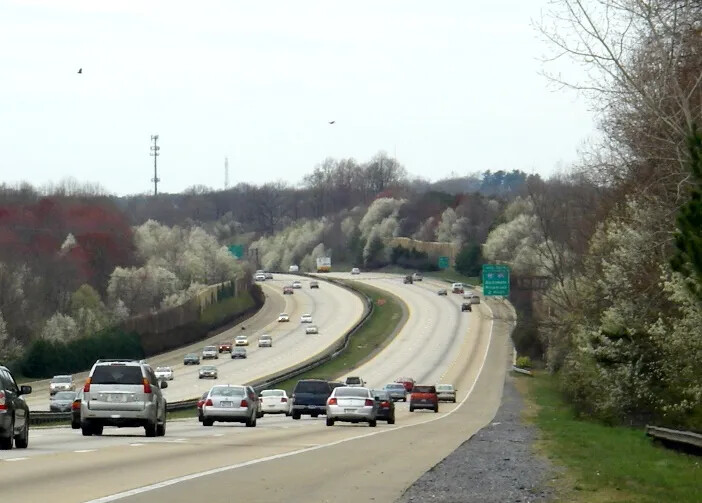 Some areas like mine had no real spreading for years but eventually someone or a bird plants a callery that will cross pollinate all the other callery. That area may not have a pollination partner yet. The original callery in most areas went many years and were never a problem in that way. They are likely here to stay at this point just elm or mulberry.

Callery pears host fireblight but they are actually resistant to fireblight because it does not kill the whole tree. Callery trees would have multiple fireblight strikes but survive and grow year after year. Therefore, callery is pretty good as a rootstock from the fireblight resistance point of view.

Here in my town (Hopkinsville KY) is a 16 acre park, developed in dedication to the 248 soldiers from nearby Ft. Campbell Army base and 8 flight crew members who perished in a crash at Gander, Newfoundland in 1985. Originally, there were 256 Bradford pears planted there, in a regimented formation.
Of course, they grew rapidly. Blackbirds, starlings, and grackles descended on that Grove by the millions during fall and winter migrations, roosting there, and feeding on the zillions of seed they produced once Aristocrat, Chanticleer, Cleveland Select, etc., came on the scene to serve as pollenizers.
By the time enough of the Bradfords had destructed sufficiently to raise the spectre that they needed to come out and be replaced by something better…there was enough bird poop, and the Histoplasma fungus that prefers it, that they treated it almost like a Superfund site… Fencing it off from the public, workers wearing HazMat suits and respirators while working there… hauling trees and topsoil to the landfill in covered trucks, and importing new ‘clean’ topsoil; followed by a much smaller memorial planting of some dwarf conifer species.

There is no telling how many bazillion callery seeds came out of Gander Memorial Park, but I’ll bet the residential plantings, all over town, of 2 ornamental pears in each McMansion yard, and all along the city streets were greater contributors to the invasion.

One of the ‘travel games’ that I used to play with the kids on trips home to AL from MO & KY was ‘spot the callery seedling’. Easy to see them in spring (white blooms) or fall/winter (red/orange/purple foliage, often hanging on well past New Year’s Day.

No. I have never seen what on the pictures when I drive in my areas. I actually grabbed some little pears and put them to a pot outside hoping seedings will grow in the spring time. But I have not seen a single seeding growing yet.

Wow. They’re certainly rampant in the eastern US.
If I stopped mowing pastures here, I’d soon be overrun by Callery pear seedlings.

It has an interesting distribution according to this map, which is as of 2015: 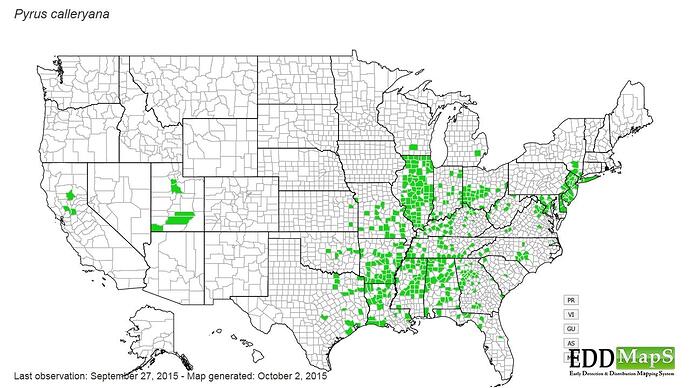 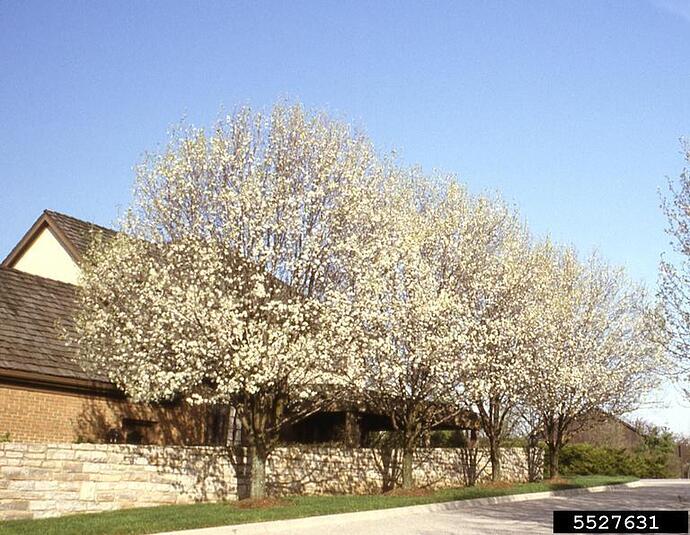 Invasives in Your Woodland: Callery Pear | University of Maryland Extension

Drive along many of Maryland’s major roads in the spring, and you will see what seems like a wall of white, as the Callery pear (and its offshoot, the Bradford pear) are in bloom. While these may be an impressive sight, these trees are an invasive...

Found the up to date version here: 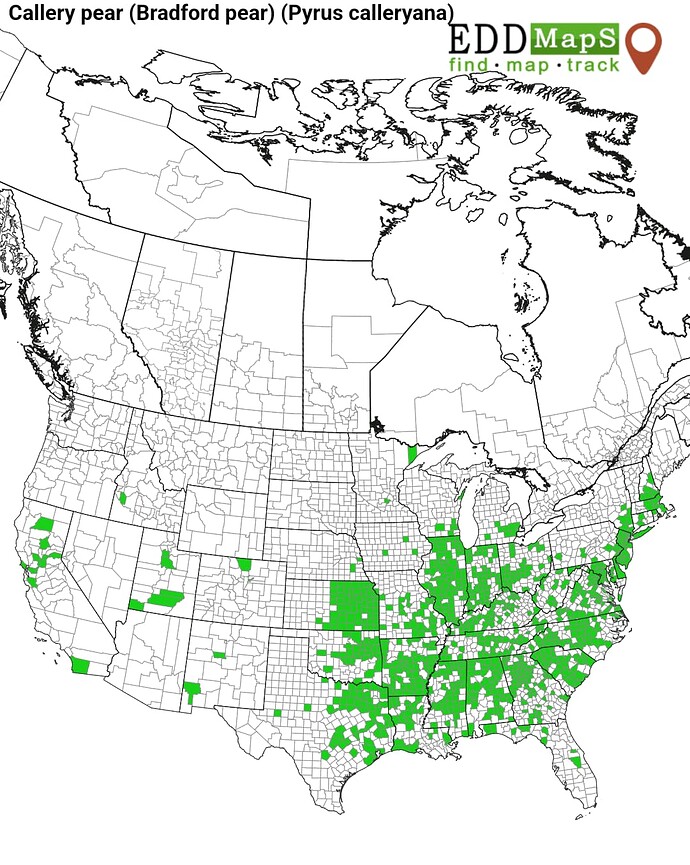 That’s a lot more places! Either it spread a lot or the reporting got better.

Thats where i live in Kansas. They adapted to the north part of the state. It happened suddenly with them showing up along highways. We saw a few spots before that did not spread. My guess is birds coming in brought more of the wild callery.

They are in a bunch more counties around the listed Allegheny in western Pennsylvania. I have been noting them in my mind while I drive all over for work, looking for reasonable sized ones to whack and domesticate.