Put the Goldrush in the fridge and don’t let them dehydrate- then try them in a couple months if you want more sugar in the profile. I’ve given people Goldrush in the spring who like sweets that have declared them the best apples they ever tasted. That’s after they left their own Goldrushes on the tree to rot because they were too acidic for them.

the quality there must have been mediocre

For your tastes and growing experiences.

Can anyone tell us more about these varieties: Pineapple Crunch, 4C-43-10, Rachel’s Mystery, Stardust or Cornerstone? A web search came up empty. Anyone selling these scions?

Nice pictures as well. I was 90% sure that my Hudson Golden Gem is accurately identified on my tree. After seeing this pic I’m 100% sure.

Never heard of a “Pineapple Crunch” but it sure looks nice. 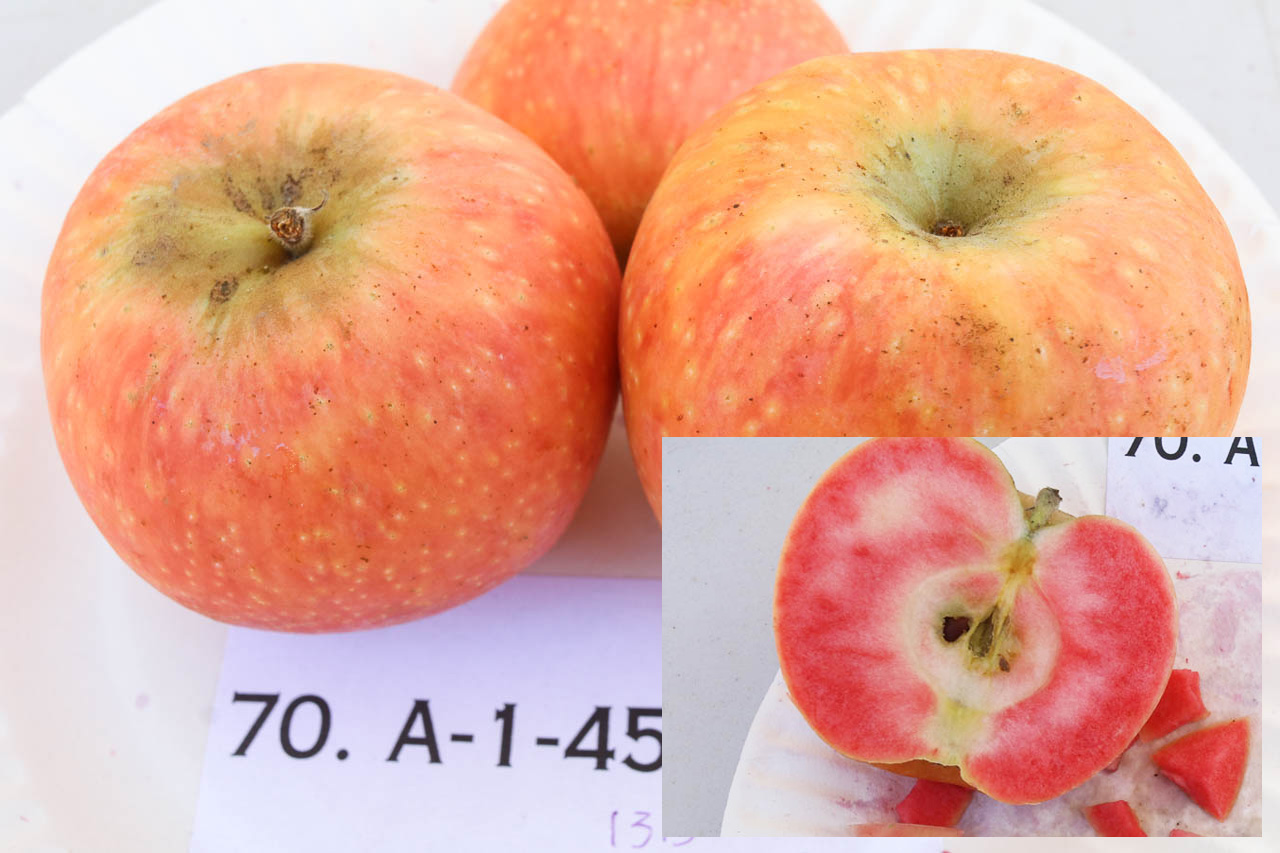 A number of the apples sampled at our 77 variety apple tasting in 2018  would be unfamiliar even to knowledgeable apple growers.  These are local discoveries and novel varieties from nearby breeding projects, many of which exist only as a...

Thanks for the link. I am excited to try these as at least some should work well in 8b. I hope to see them in wider distribution. Good on the local growers for furthering varietal excellence.

For your tastes and growing experiences.

You keep saying that and I wonder why. I think that most every person on this forum from a wide range of regions that measures brix has indicated a preference for relatively sweet fruit. Growers from the west tend to get higher brix readings than I can usually get.

I’m just trying to add some perspective before people commit to buying varieties based on high ratings of a taste test that seems rather dubious to me.

Any apple growers on the west coast that measure the sugar of their fruit care to weigh in? 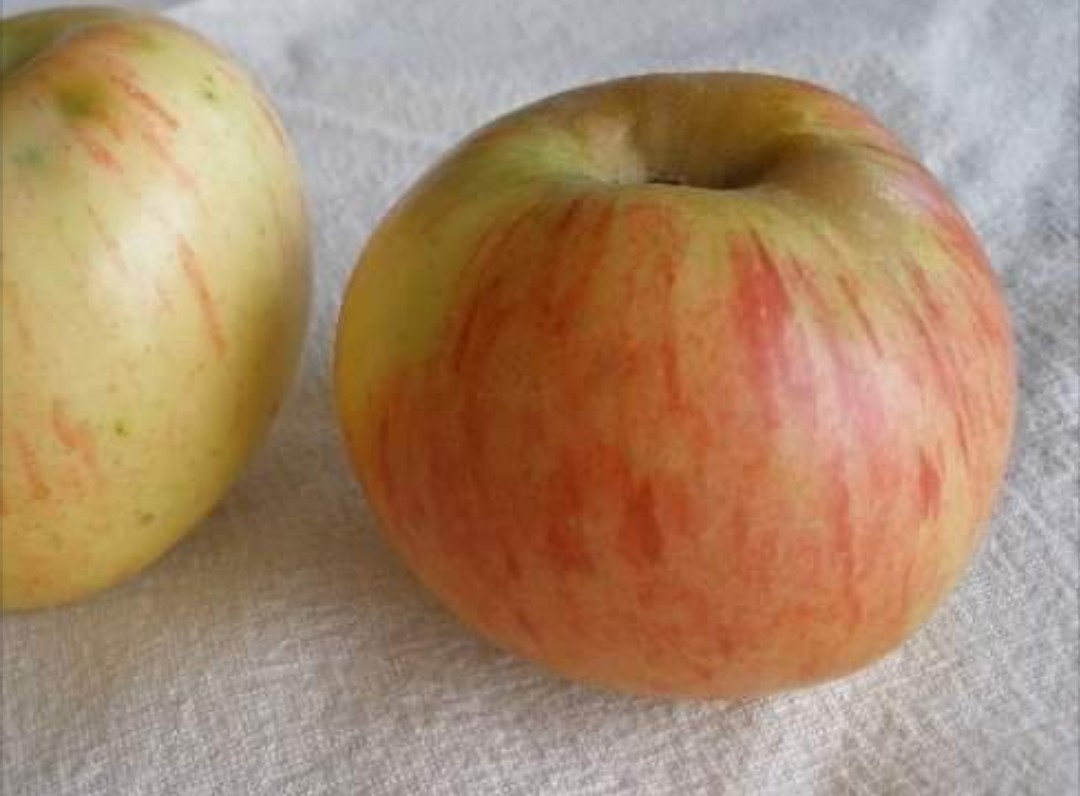 I was at this tasting and can provide some additional information.

It took place as part of a “Heritage Harvest Festival” and the participants in the tasting were largely the attendees–families with kids, foodies, local farmers, folks into old-timey wares, etc. Several of the folks there had only tried supermarket apples from their comments. Of course, there was a CRFG-member contingent, but I’d say it was a relatively small percentage.

Attendees were given a few (3?) colored stickers and told to put them next to the names of their favorite apples on a board at the end of the tasting.

There certainly were some well-grown apples, e.g., some big, flawless Cox’s, and some very tasty specimens of other varieties. This chapter (Monterey Bay) covers the Pajaro Valley, where there are acres of ‘Newtown Pippin’ trees for Martinelli’s apple juice, and presumably-experienced growers. With that said, I encountered variation from apple-to-apple within a single variety and, consistent with @fruitnut’s assessment, some varieties were not as tasty as I expected or I know that they can be.

I don’t normally measure the brix of my apples (but maybe I should pull one out of the fridge and do that*) and the apples at the tasting, by and large, did not seem lacking in sugars to my taste.

I forget the order in which I marked the top 3, but ‘Claygate Pearmain’ ‘Cox’s Orange Pippin,’ ‘Karmijn de Sonnaville,’ the two ‘Pineapple’s’ mentioned in @Hristo’s post, and ‘Brushy Mountain Limbertwig’ were the stars of the day for me. The ‘Pineapple Crunch’ I had was exceptional, close to Cox in sugar, acid, and intensity, but Cox had a bit more complexity. I’d add ‘Pineapple Crunch’ if I could.

*Edit: I tested an ‘Espous Spitzenberg’ picked 9/22 out of the fridge and it measured 21.4 brix

When I went to a CRFG meeting in Santa Cruz there were growers from all over the state, so I had assumed there would be growers from a wider area than you suggest. If a substantial number of the samples were grown close enough to the ocean to get days where the fog burns off further inland but stays around there it might affect brix.

However, it is interesting that a single apple you pulled out of your fridge had higher brix than any apple on their list besides Pome Gris when growers presumably brought their “bragging” apples.

Spitz is among the highest brix apples I grow, however, and it reaches that number here at a good sight on a good season. It is my favorite antique of all I grow because it not only tastes great but cooperates. Bears young and consistently with gorgeous fruit (in my region and based on my experience).

Got to get some Pome Gris and Karmijn wood. Thanks for the heads up, Richard.

Thanks for posting the results. I find it interesting that BM Linbertwig won by such a large margin.

Also interesting that the apples with the highest brix did not win.

Since the apple varieties were labeled I would expect that apples with the “cooler” names would get some extra votes, but Brushy Mountain Limbertwig does not impress me as a cool name.

Edit: Forgot to mention I was surprised that Spitz, Pippin and Goldrush were so far down the list. Also surprising that Gala was even on the list since it ripens so early compared to the other apples. Gala ripens 2 months or more ahead of Goldrush in my area which is about a hour away from the Brushy Mountains of NC where the BM Linbertwig orginated.

I’m not surprised goldrush didn’t win. They need to hang forever and then they need to sit in storage for at least a month or two before they are really terrific. I’m just now beginning to eat mine.
I find the whole tasting to be fascinating, and emblematic of how difficult it is to figure out what is “best.” I mean, even within a single tree there is variation from apple to apple, much less across a whole orchard with apples that ripen at wildly different times. Wet years favor this apple, dry years favor this other apple.
It’s one of the things about apples that keeps me so interested.

I would say it is more important to look at what is good in these tastings rather than what was not, due to the fact that the non-good ones could be sub-optimal specimens (as many people mentioned above). I would like to try several of these top-rated ones!

Re: brix, once you get above 15 to me the brix benchmark has been achieved, it is lower than 15 where you start to not like an apple due to lack of sweetness. It is also not consistent, the more sour the more brix needed. My Pucker Bomb seedling was 20 brix and tasted like 10 brix since all the acids drowned out the sugars. On the other hand a low-acid (“sweet”) apple will taste cloying at 20 brix.

once you get above 15 to me the brix benchmark has been achieved,

I completely disagree- it depends on the variety. Some need to be at least 19 to reach highest quality and some never get there and are delicious anyway. However, all my favorite apples happen to be the higher brix types.

Show me a 15 brix Goldrush and I will show you a mediocre apple.

Speaking for my palate only, although my informal public taste tests (when people walk through my orchard sampling apples) tend to confirm my opinion.

Read the rest of what I wrote above, I qualified the remark you quoted … 15 brix on average, more for sour apples and less for non-sour apples. GoldRush will need to be above 15, especially right off the tree when it is even more sour. I don’t remember offhand the brix of the GR that I liked a lot but maybe it was around 18?

I’m fascinated by the fact that Brushy Mountain Limbertwig won the apple tasting contest in 2018 too!

I think Fuji needs to be high brix to achieve highest quality and the best Jonagold I ever ate clocked in at 20 brix.

Excellent commentary, Scott.
A sweet apple with 10 Brix is fine if it has no acid.
And, that was a fine test…even if the results might have been different with a blind tasting
or with a different group of tasters.
(Thanks, Richard, for the groundwork.)

I find that hard to believe, too. I’ve had them from a large orchard, and found them to be a hard, almost flavorless apple. Even after leaving some in storage a month or so, they didn’t improve much. Similar results and taste to Arkansas Black. Guess they just don’t do so well in these parts.

That could be, but if they are picked too early no amount of storage is going to help. BMLT is very late ripening, I had a few this year but they were taking forever to ripen and by the time they were nearly ready the deer had chomped every last one.