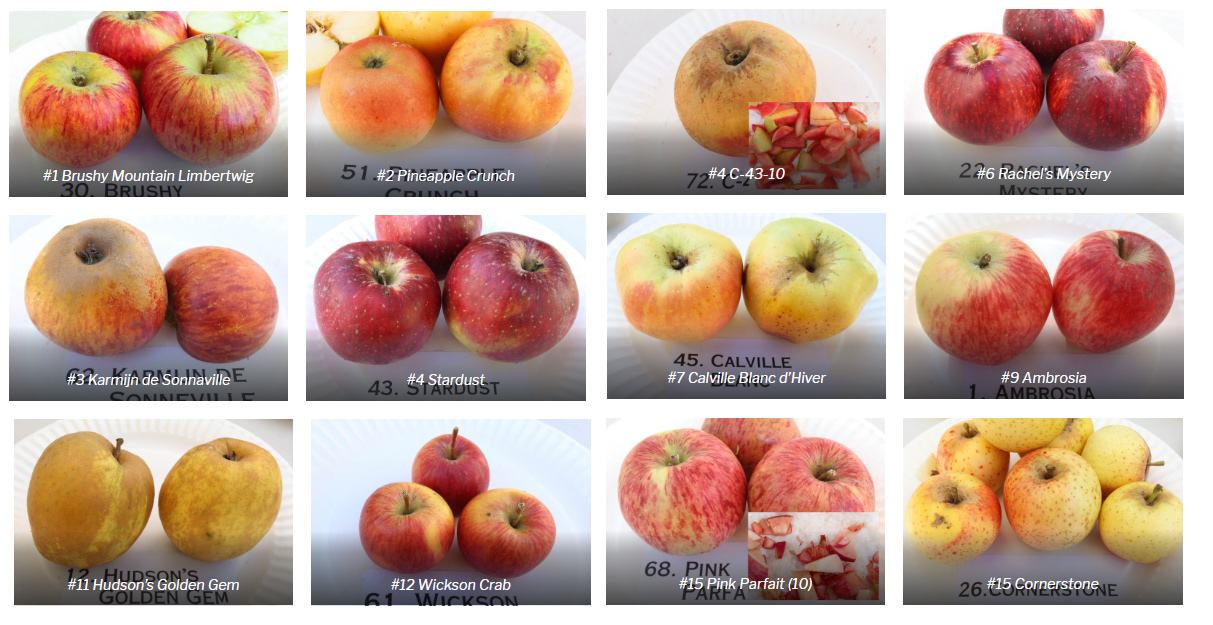 For the benefit of visitors to California Rare Fruit Growers northern circuit of Scion Exchanges, below is a complete tabluation of taster rankings from our October 2019 apple tasting in Santa Cruz, California, an event held now for over 30 years...

Wow, really interesting how many of the top choices are Etter apples, or Etter offspring! Must be just the right climate there.

Very informative. Good to see new varieties, too.
I do suspect the taste results would have been much different if some local high school students had been asked to do the tasting and voting, though…the ‘grocery store’ apples would have gotten a lot more votes I suspect.

It seems to me that given the relatively low range of brix, I’d take the conclusions with a grain of salt. There is something wrong with these apples considering they are grown where it doesn’t rain during the growing season. There should be more readings in the high teens into the 20’s. I don’t get it.

Fruit collectors are a better judge of flavor than brix.

The point is they took brix readings which seem quite low and the samples may not be representative of typical high quality apples hobbyists pick off their own trees in the region. All of my favorite varieties reach 18 or higher when peak- and I live in a humid region where brix is diluted by rain.

When you do brix readings regularly you can guess within a point. There is a very strong correlation between taste and brix.

Man this is funny- here (Maryland, 7B) my Brushy Mtn Limbertwigs were outright duds- for a couple years so I grafted over those branches. They must need hot and dry. Or, as I’m starting to suspect, my soil just doesn’t grow the best apples. Or, as Scott suggests, some of these old varieties need to hang a very long time to develop flavor.

There is a very strong correlation between taste and brix.

… for your tastes, in your environment.

for your tastes, in your environment.

No, I think its pretty universal based on my exchanges right on this forum. People often complain about the taste of fruit on this forum from all over the country that they buy and then discover relatively low brix. Also, growers in the west report much higher brix readings than I can usually get in my invironment and rave how much better their fruit is than what they can buy.

Ask Fruitnut how important brix is to the quality of his Texas fruit.

And yet there were at least a few hundred experienced CRFG members at the event whose tastes disagree with yours. You can contact Andy Moskowitz (via the article) for further information.

Or, as Scott suggests, some of these old varieties need to hang a very long time to develop flavor.

That’s been my experience thus far with Limbertwigs and some other Southern keepers here in Northern California, specifically including Brushy Mountain. A month or two of storage makes a remarkable difference in the quality of the fruit.

Almost 500 tasters - that’s a good number to get average likes. I haven’t had any of the top 10 but would sure like to try them. I’m surprised Fuji only got 3 votes.

Fuji ships well, stores well, and by the time it is on the shelves of supermarket chains still has a lot of sweetness for sweet apple lovers. It was selected as a commercial cultivar for those reasons. However, straight off the tree here in the west it can be insipidly sweet. I won’t grow them.

And yet there were at least a few hundred experienced CRFG members at the event whose tastes disagree with yours.

Not necessarily. I assume they were the best apples at the taste test. I’m suggesting the quality there must have been mediocre, not that the tasters were inexpert.

You are acting defensive when I wasn’t talking about the quality of your submission- I appreciate it. I’m just puzzled by the brix readings and your explanation didn’t satisfy my curiosity.

I like Red Delicious and Fuji both…on a chilly fall day right off the tree…if varmints don’t eat all the fruit before there are any cool days. Fuji is the only apple I have two trees of. (Except young trees I’ve grafted several ‘copies’ of…and don’t exactly know what I’m going to do with #2 or #3 of some of them.)

Sometimes I feel like a distinctly sweet, acid-free apple and Fuji can fill the bill. I like Sansa for the same reason. Both are high brix apples with Fuji often reaching the 20’s. I’ve never bothered measuring Sansa, but it must be almost the same and collects all that sugar before any other apple I know. I used to prefer Zestar in its season, but recently lean towards Sansa, which is unfortunate because it isn’t as cooperative a variety as Zestar. Sept Fuji is a good sweet between Sansa and Fuji and doesn’t push all the wood as Fuji. Fuji’s value as a commercial apple is not so much its ability to hold sugar as texture. Sugar is not lost in storage until it becomes vinegar, I think.

One year I bought some Fujis late in the season from an orchard in Sacramento. They fit Richard’s description perfectly. They were apparently left on the tree too long, but the only apples I ever grew in CA were Beverly Hills apples, if that’s the name- over 40 years ago. My only experience with CA apples since is in N. CA when I visit and tend my sister’s trees and visit farmer’s markets and one CRFG-NAFEX meeting I attended in Santa Cruz probably 15 years ago. They did a taste test then as well, and such tests are always problematic but interesting.

The best way for me to evaluate apples is off the tree and between apples in the same harvest season- whole apples with equal light exposure. The quality of apples on the same tree can vary greatly, at least on the free-standing trees I manage. A single wedge from a single apple does not tell a true story- although the more attended an indoor test, the more representative the results are likely to be. But it’s still based on very few apples from a single tree of every variety at various times in storage.

The tasting was in October. Only a fraction of the apples would be at peak flavor in October or at any other point in time. If you had good storage conditions and did a tasting every month the results would be different. My Goldrush are just now coming into best eating quality. They are too strongly acidic for me in October even at 20-25 brix.

The results are one point in time at one location with climate/weather way different than most of the country.

@greyphase did you see a Limbertwig won! Let a alone Brushy Mountain being the culprit, interesting.

Hey Dan, how are you doing? Need any scion this year.

IMO any tasting that isn’t done blind (at a minimum) shouldn’t be taken too seriously. People’s biases get in the way more than we’d like to think. Way too easy to get people hyped for one variety or another and shift the votes that way.

Reminds me how whenever our town does a chili cookoff the winner is always the one that had the most decorated booth with loud, charismatic people handing out their chili samples.