We attended our first Apple tasting event this weekend in Santa Cruz. 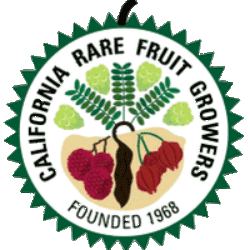 Our Apple Tasting is Back! | California Rare Fruit Growers

Welcome back to the Monterey Bay Chapter of the California Rare Fruit Growers' Apple Tasting!  We will have over 70 varieties of heritage and rare apples for participants to sample and rate. This extraordinarily popular event will be held...

This is continuation of the 2019 version of it here, posted by @Richard

The event started at 2:00PM and we were there by 2:30 and there was a long line and it probably took us 45 min wait to get near the apples. But it was a beautiful day and the event itself was quite well organized. Most of the apples were from Freddy & Ellen’s orchard and Rider & Sons farms. Some pics below 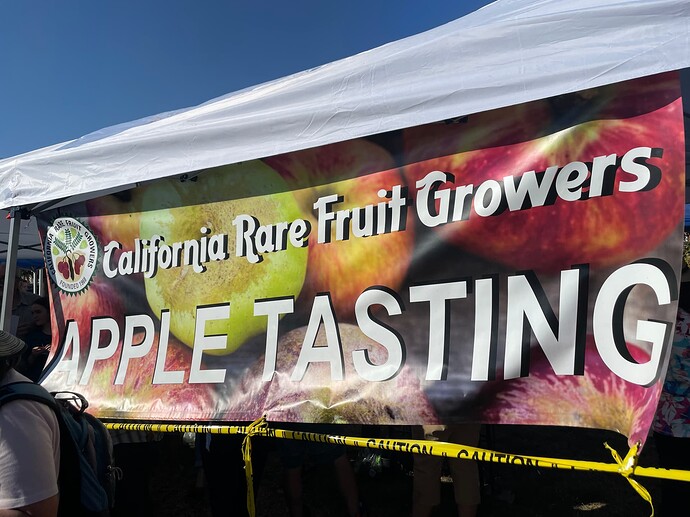 Clipboard for each person with stickers for final vote 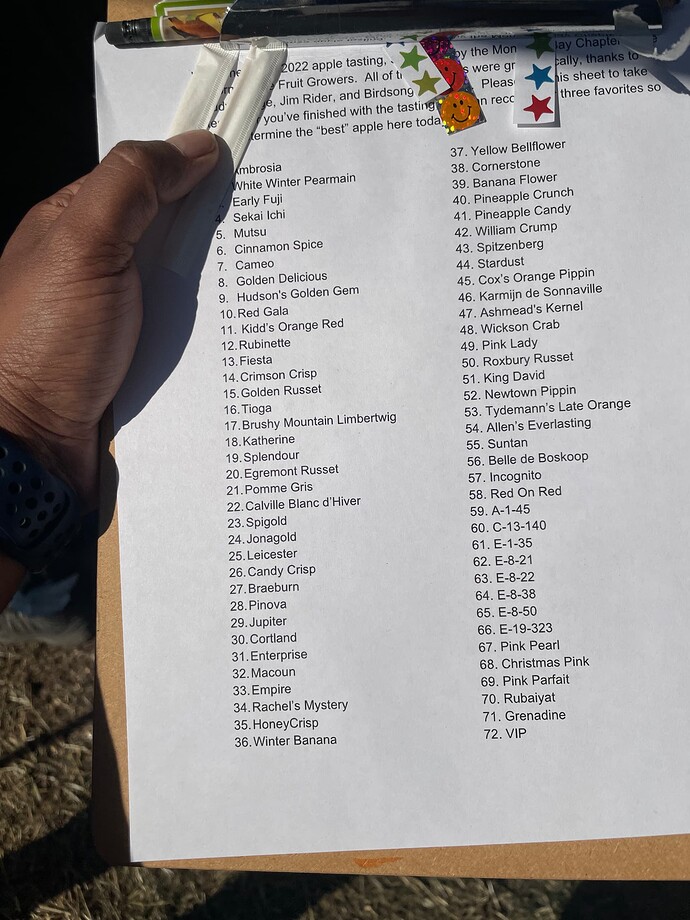 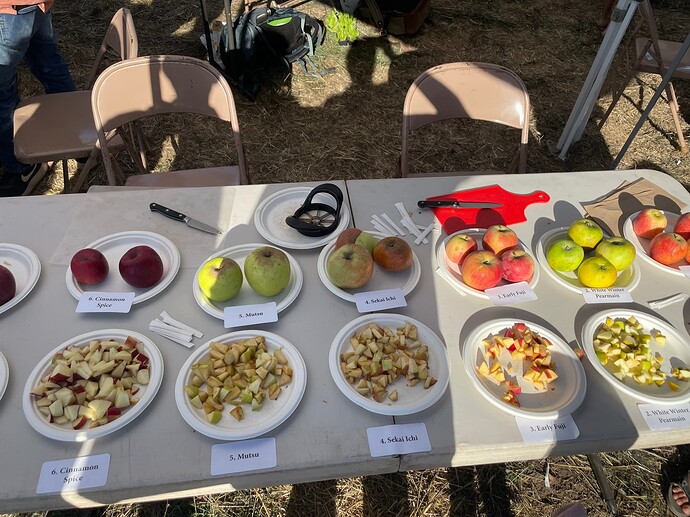 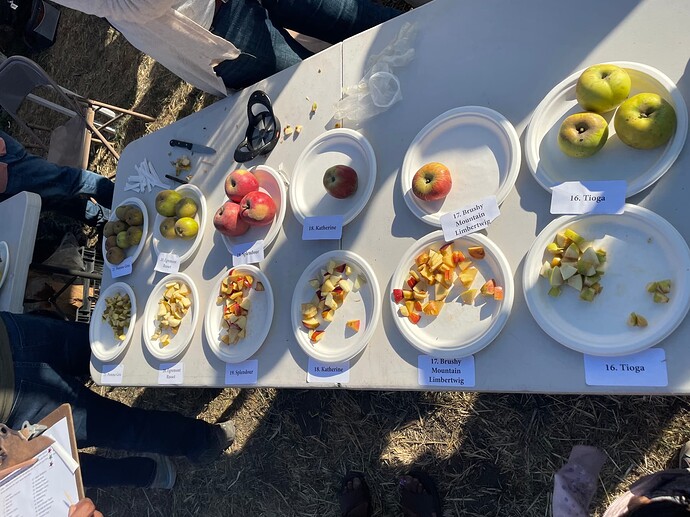 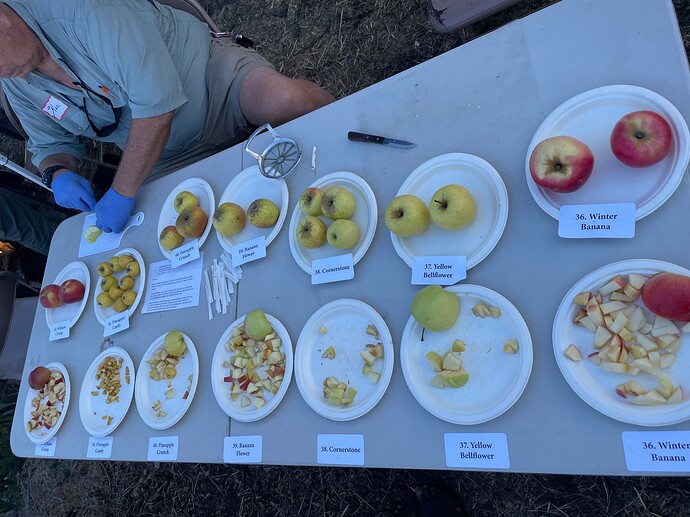 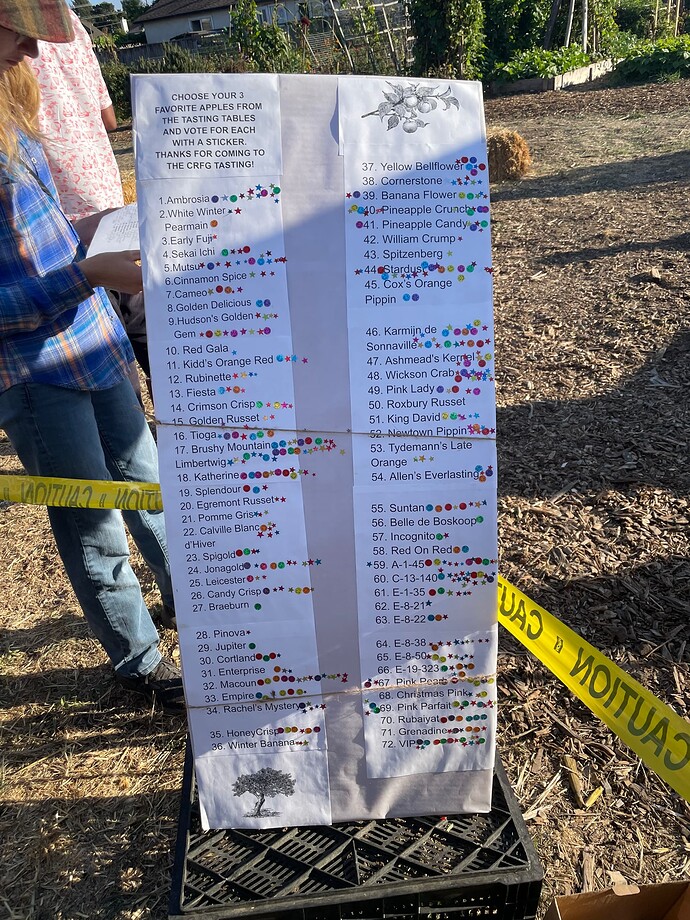 I didn’t make detailed notes, as we were managing two kids in a long line and they were getting bored at the end

My overall favorites were

I really like the voting chart. I’m surprised at some of them (spitzenberg and pinova), but a friend of mine (with 150 varieties in his orchard) reminded me that it’s not a fair fight since they won’t all be optimally ripe at the same time…

Also, the flavor of ripe apple varies by region.

Yeah, my favorites didn’t fare well. But I suspect Golden Russet may not be ripe yet.

One of those two votes is my wife’s

To me, Golden Russet was too tannic and probably needed to mellow down more. Under-ripened?

Hudson’s golden gem is also one of my favorites among the russetted types.
I like Wickson crab as a different intense flavored apple. What did you think?

I was looking forward to Wickson’s crab and Pineapple candy (which is a seedling of WC). Both of them didn’t have much going on this time. I have tasted WC before and it had rich flavor

I appreciate that chart as my son is looking to graft a few apples this coming Spring and we’re looking for suggestions.
But no Goldrush at the tasting?!? I think that’s a really great apple

Thank you for the post. We also went to the tasting and had a great time. It was very well organized and helped me make some of my grafting decisions. Somehow I thought that I really liked Cortland after living in MA for 8 years. Now I’m discovering that this is probably not the case.

I wouldn’t rule out an apple from one tasting, unless people who tried the same piece of fruit were raving about it, and I still didn’t like it.

Good idea. I had it when I lived in MA and liked it. However, Macoun tasted much better. I will graft Cortland if I happen to get a scion but I won’t hunt for it as I originally planned.