Satsuma is a very good tasting and productive plum. It is a keeper. 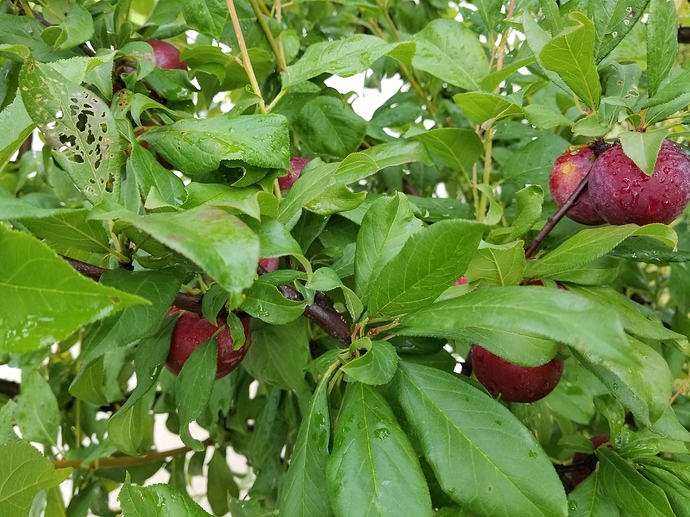 Flavor King is Right next to it 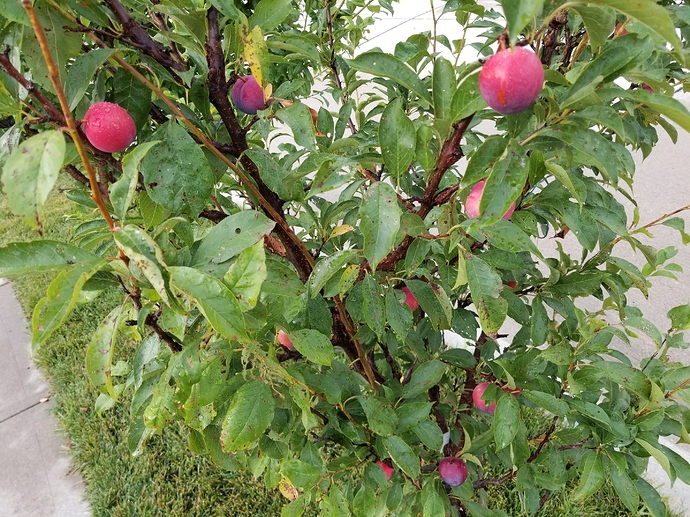 Do you protect it from your winters? Even in my Z6 it is a bit fragile, and I’ve lost trees to much less than test winter cold. I lost a tree in Greenwich this season that probably faced nothing lower than -10. Santa Rosa is also pretty tender, although the general nursery industry has been led to believe it is a hardy one.

I lost my first Satsuma in my own orchard a few years ago, but had already planted another at another part of my property- they were both planted at sites with good drainage, both for cold air and soil, nearly identical soil and elevation. This is always a bit of a mystery about winter and spring cambium kill- what lives and dies is quite unpredictable although certain varieties and species are certainly more susceptible to injury and death.

I recommend that all people in Z6 or colder start their J. plums on Shiro and graft what they want to that. I haven’t lost more fragile ones grafted to Shiro yet- but this is a fairly new approach. At least the mother tree is likely to survive. It also has a more cooperative growth habit than the rank growing Sat. Less work to develop a nice shaped tree- at least on myro.

No Winter protection for these plums and pluots with -19F last winter. I bought a bundle of 20 native plums from Missouri Department of Conversation/Forestry about 8 years ago and grafted all my plums, pluots, and pluerry on them and they are in dwarf forms and didn’t have to prune them yet. They are 8 years old and about 8 feet tall.

I bought a bundle of 20 native plums

So your Satsuma is grafted on one of them. Hmmm… I believe a Sat on myro would be toast at -19. Your approach seems to be working, but are you getting all the fruit you need from such tiny trees? In 8 years a Sat on myro produces bushels, but I really like your approach. I should try that in my nursery- I don’t believe natives get much black-knot either.

I just have problems with the Japanese beetles eating their leaves so far and that is all, As far as for production, I thinned each tree to about 25 to 30 fruits just for quality eating so I have not let the tree fruited to it potential because of the dwarf forms.

I bought my two Satsuma from Schlabach. They were on seedlings rootstocks. One I cut it down due to bad canker and a cramped location. The other is still there but in a partial shade area. This is the 5th year?. Plenty of fruit. It would have more had the tree been in a sunnier area.

A couple of years ago, Satsuma’s flower buds were all killed by freeze. Flower buds are not as cold hardy as Shiro’s.

Lost 2 young Satsuma"s this past winter with a low temp of 8.2 degrees. The graft died but the hybrid chickasaw rootstock survived.

A couple of years ago, Satsuma’s flower buds were all killed by freeze

That happened in my area last year. Some sites they were fine, some fried while Shiro thrived, some sites there were no plums, not even Euros. It was because of a late winter hard freeze ,as I recall, but the years and minor disasters start to flow into each other at my age. .

I picked my first Satsuma this year. They looked perfect. Protected with bird netting and electric fence. No body got to them. Tree ripe and very soft. But they were so bland. Not even the tiniest hint of sugar. No flavor whatsoever. Much worse than store bought plums. I thought Satsuma supposed to be a nice tasting plum?

@Susu,
Sorry to hear that. Satsuma I have tasted good. Not sure why yours tasted poorly. Can you show pic of the inside?

Few pictures below. I picked couple of Laroda off the same tree. Much better tasting. It had split because of all the rain but still tasted nice. 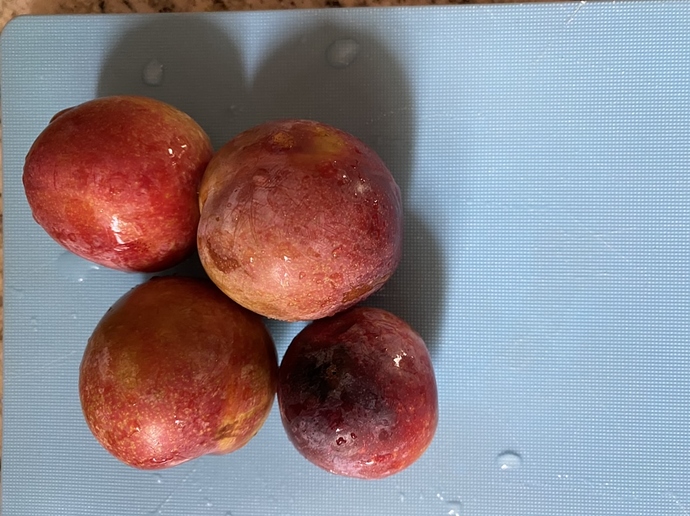 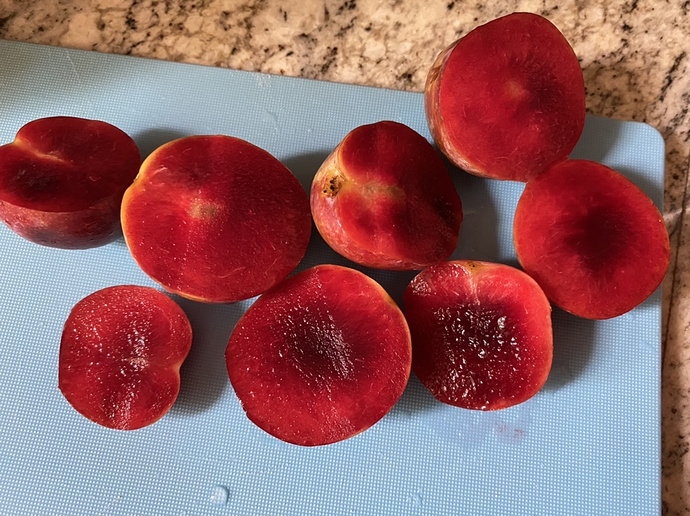 I am surprised your Laroda ripened already. Last year I picked mine on 9/18 and it was great. Brix was 22.

Usually your fruit ripen 7-14 days ahead of mine.

My Satsumas were also somewhat bland this year … first time ever that has happened, it has been fruiting for 15 years or more. My guess is the weather was not friendly to them somehow.

One thing that hurt them here was relentless spring rain that led to a lot of bacterial spot and a fairly high amount of defoliation. Of course, the crop was frozen off anyway everywhere I grow it, even places where other varieties made it.

I grafted a lot of Elephant Heart this year because it seems to be a bit sturdier than Sat and is all and all a superior plum when it bears. Some sites it bears pretty well, but it’s all a bit of a mystery.

when we were getting mild winters and drier springs Satsuma had a good 4 year run here, Now it’s sucked the last 3 out of 4 years and one of my two trees died from cambium damage, but so did my orchard’s Elephant Heart- but that was after 20 years.

@tonyOmahaz5 just curious, where would you rank satsuma vs Italian prune and red heart?

I noticed the leaves on my satsuma graft have a red tint to them when compared to the emerald beaut leaves of the tree it’s grafted to. It is normal for satsuma to have colored leaves?

@scottfsmith has the weather been more wet or more dry than previous years?

@speedster1 Has the weather gotten warm? Mine have gotten reddish tint as well on the top surface since the weather’s gotten warm. The bottom of leaves are still green tho.

This year I am seeing some overworked trees relative to cicada damage. Fruits are much smaller on some trees compared to where they usually are this time of year. This is not on all trees, just some.

Hi guys. I have both Satsuma and Mariposa fruiting in my orchard for over 6-8 years.
I agree that you can say that my climate is suitable because it resembles the California climate, etc…
I say only one thing
Satsuma variety is a plum “chestnut” (absolutely mediocre from my point of view).
Their improved variety Mariposa, is a true plum wonder (in every way).
This is my opinion after harvesting both varieties for several years.

Mariposa is a marvel and Satsuma is a variety of the heap.

Of course , I admit all the criticisms .
But my experience in my orchard makes me say this.