I lost 3 ripe melons to the rodents and was sure I will loose the rest as they getting ripe, but looks like I found a solution. I took old plastic bird netting - ripped and tangled, ready to be thrown away… Then I wrapped each melon with it as is, without untangling it. So got an airy pillow of net around the melon. The week passed - no damage so far. They are getting closer to be picked. I do not think rodent can’t rip it open. I think they are just afraid of the feeling - that thing is clinging to anything it touches. May be the solution will be useful to someone. 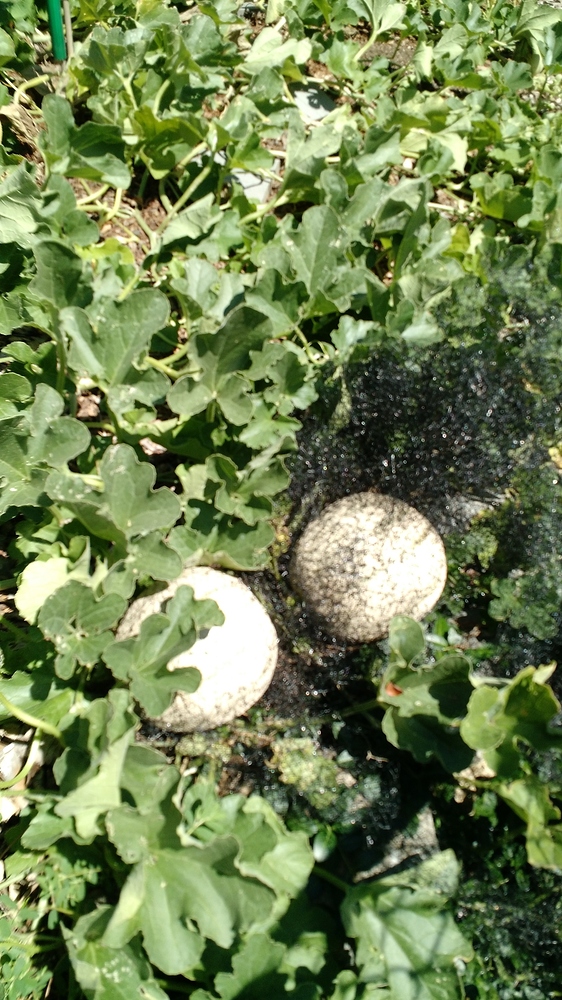 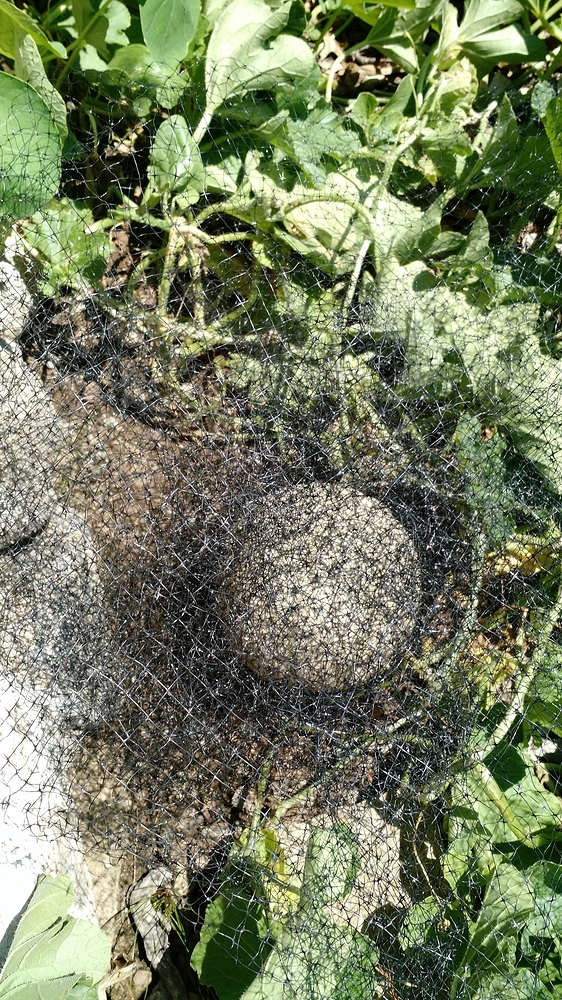 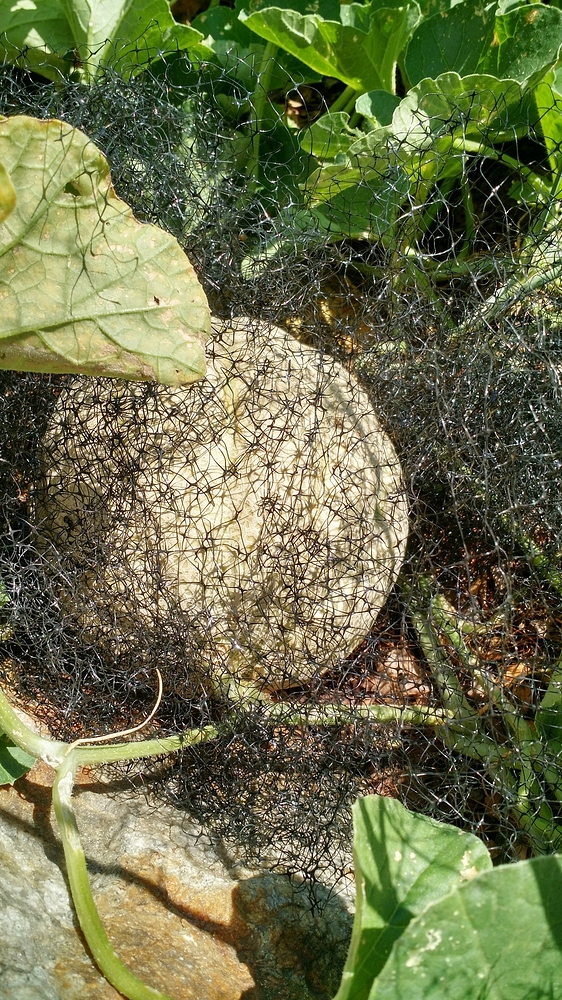 Yes, it traps me the first

. But the melons are safe

I have mine under American nettings now, where they’ve been safe so far

Used to put them into ziplocks, but the squirrels can go thru ziplocks

I hope it is just slight dislike?

Having to get a skunk out would top any worst case I can imagine. I had a snake attempt to get through the holes and got stuck.

Once I had to release a skunk from have-a-hart trap. That was an adventure). And today it was tailless squirrel. I do not kill them - makes no sense, they will outnumber me anyway… But the trap is for groundhog and they just can’t leave it alone!

While I was lifting my bird cage off of the blueberry bush I first thought it was a long stick dangling downward. It is the snakes you don’t see that makes your heart flutter. Needless to say, but getting a live snake released is an intense job.

It is the snakes you don’t see that makes your heart flutter.

Well, now you’ve gone and made me tell (and show) my all time worst snake story…which goes so well with what you just said.

So…I let my chickens lay eggs in those plastic milk crates I’m sure you’ve seen. The milk crates sit very high up on a shelf in my small barn. So in order to get the eggs, I have to reach up above my head and put my hand blindly into the milk crate and feel around for the eggs (at least I USED TO!). You can probably guess where this story is going. Sure enough, one day I reach down in there and grab something that starts squirming around. It’s one of those situations where your mind instantly knows what is happening, but your body just won’t cooperate fast enough, so for what was probably 1/2 a second but felt like years, I’ve got my hand wrapped around a dang snake who was really as freaked out as I was! And since I can’t see it at the time, of course I’m certain it must be 8 feet long and deadly poison. haha It wasn’t close to either, but I confess I screamed like a little girl and literally ran out of the barn…as if the snake was going to chase me. haha. Needless to say, I rearranged my milk-crate egg nests later that day.

Here is what I found once I calmed down and put my ladder so I could look in. Got it hand it to the little guy, he was pretty ambitious if he was trying to try and eat one of those eggs given his size. 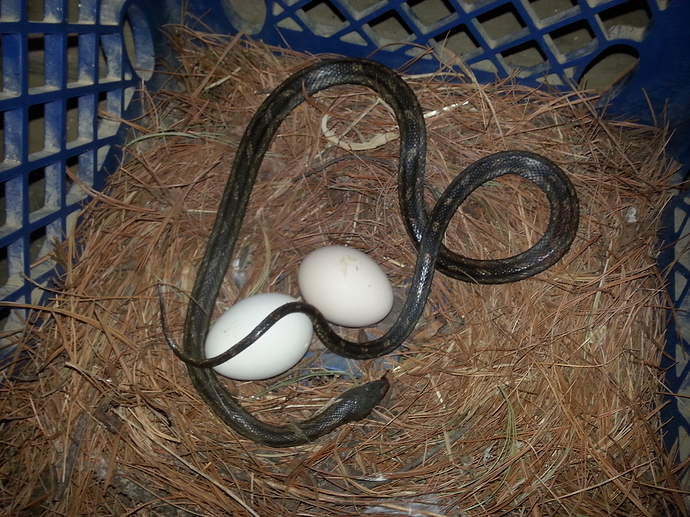 Not sure that my heart would make it through that experience.

I used to raise barred rocks and they would eat my snakes. They have a hooked beak like all predatory birds do. Needless to say they ganged up on snakes, rodents, frogs etc. . They ate a host of insects such as grasshoppers all summer long. The chickens roamed the garden looking for my produce on a regular basis as well. I need to get some more but they are to much work for me at the current time. Didn’t much care for their ways some times eating my tomatoes and frogs. That was something that didn’t go over very well.

I’m with you Clark! I love my chickens, but if I have a low hanging peach or plum or really any fruit at all, I can be sure it’s going to get chicken peck holes sooner or later. They especially love figs. I’ve watched them stand under my fig trees and they will jump up in the air, and at the crest of their jump they will take a big bite of fig. Then they fall back to the ground and repeat the whole process. Its really funny watching them stay in one place and just jump up and down, but having my fruit eaten isn’t so funny. I finally found an incredible solution. Its these little movable dog pens. Anyone who reads this and has chickens or other domestic animals that damage your fruit, these things are perfect. They are connecting, folding pannels about 4 ft high and all you have to do is unfold them and surround your tree. Obviously they wouldn’t keep wild animals out, and you’d think chickens could easily jump or fly over them, but they are too dumb to know they can. I enjoy free range chickens because they eat TONS of bugs and require almost no care from me except in winter. These little pens stop them from hurting trees. Since they only eat ripe fruit, I just move the pens around to whatever fruit is almost ripe, so I don’t have to have these pens for all the trees. They stand by themselves…no posts to drive in, nothing to but unfold and wrap into a circle. 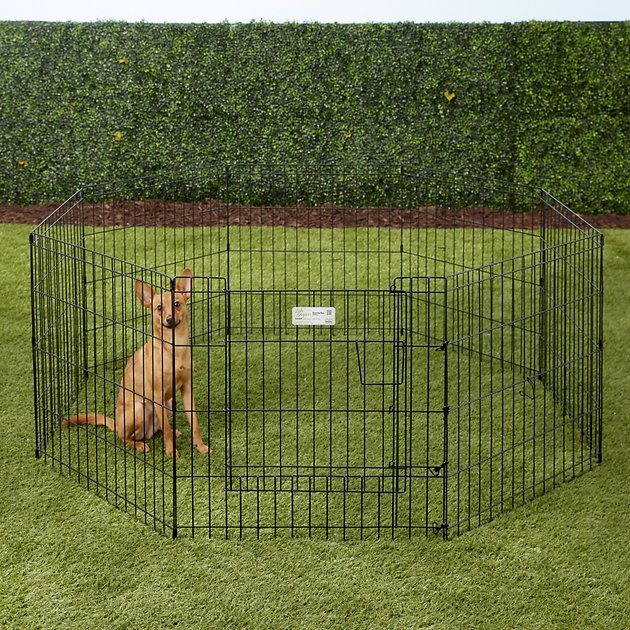 How do you keep the from digging dust bath holes and grub hunting around your trees? I would find 2 foot holes all around the base of my trees with a bunch of chicken heads or feet sticking out of them as they roled around dusting themselves or eating in the hole!

Great point, Clark. I think I’ve just been lucky that they have a better place for dust baths. I have one area on my property that is on the edge of some oak trees and apparently the dirt is just perfect for dust baths, because all my chicken do all their “dust bathing” in that one fairly small area. As for grub hunting, they do scratch around in the mulch under my fruit trees, but usually they don’t make too much of a mess. They will scratch some bare spots, but most of the time they cover them back up when they scratch a few feet away. Sounds like maybe I’ve just been lucky.

I have about 10-15 free range chickens on average most of the year. From daylight to dark, they roam around my orchard and other grassy and- to a lesser extent- my garden, all the while doing little else but eating bugs. 15 chickens eating bugs 12-14 hours per day, I have to believe they are eating thousands of bugs- POUNDS of bugs over the course of summer. I have to believe that is a good thing. They drink from my pond, so I don’t give them food or water except in winter time. They give me eggs, occasional meat, insect control,and entertainment all year, and only cost me a few bags of feed a year. For me they are fun and beneficial, but from the issues you’ve mentioned, maybe I’ve just been lucky!

Lot of the problems I brought on myself with chickens. Made sure I put an English game chicken and a dark cornish chicken with the rest of the girls. They don’t lay many eggs but they survive with no help of people. That English game chicken could fly straight up with no problem. The reason why I did it was when I was a kid maybe 7-9 years old my dark Cornish hen disappeared and I had not saw her for a month. We wrote her off to having been eaten by coyotes. She showed with over 20 chicks in tow! I hid in the weeds and followed her home later curious how she survived a month without me. She went back to a mulberry tree and there at the base I found the broken shells of every egg she hatched! She raised those chicks on mulberries since they hatched at 21 days. Dark Cornish are more wild than tame and set their own eggs. They are part English game chicken. English game chickens are about as wild as they come. When it comes to survival those chickens are good at it! Next time I get chickens I will go with dark Cornish and white leghorns. The white leghorn roosters are floggers so don’t get one of those! The hens lay an egg a day. If you crossed dark Cornish with leghorns I imagine you would have a great bird but make sure the roosters go to the dinner table or sell them off because they would be mean ones from Cornish x leghorn !

Galina, please tell how did this turn out for you. Were you able to protect the remaining melons?

It worked from rodents, but not from birds.

I use those plastic fruit containers (example). The ones for Costco grapes are particularly large. It may not work on a large scale, but I only have a few, smaller melons to protect.

yeah, I don’t think my melons will fit these containers. I have picked my last melons yesterday, they are not super large, but 6 of them together do not fit 5 gallon bucket, so they are too big for containers. I am planning on using metal cages next year on top of the plastic netting. Plastic will protect from rodents from the bottom, and cage(dollar store wire trash can) should keep the birds away.