I’m using a Worm Inn Mega so I have constant flow of worm excrement throughout the year due to its flow through design, but I do use the largest amount in the spring.

Hopefully last cold night here. I moved these trays back into the garage for the night. 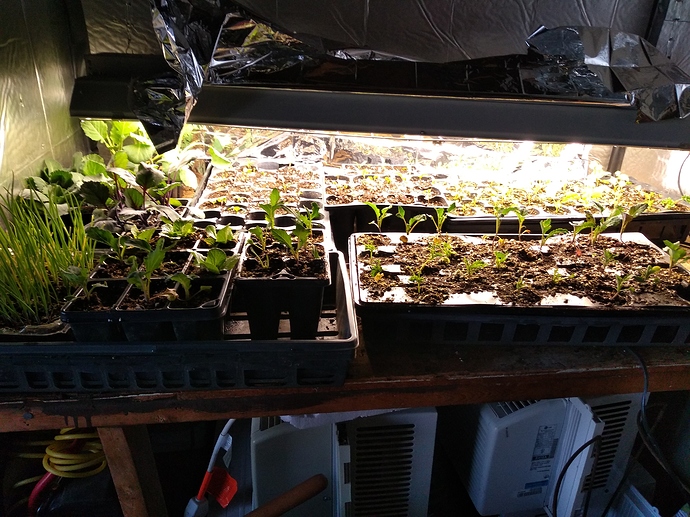 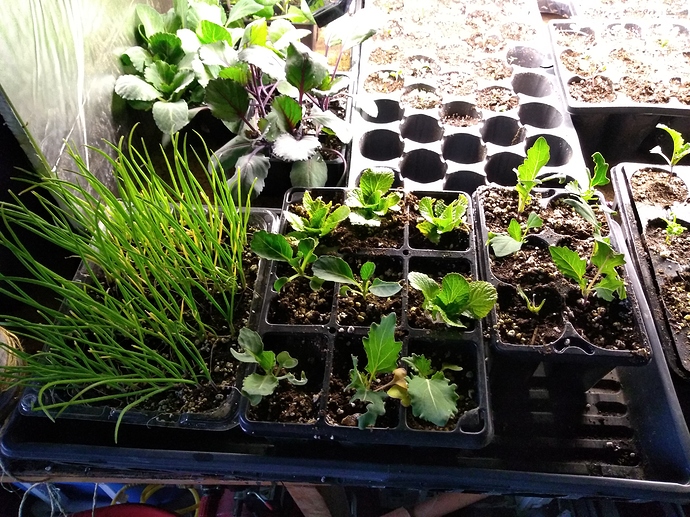 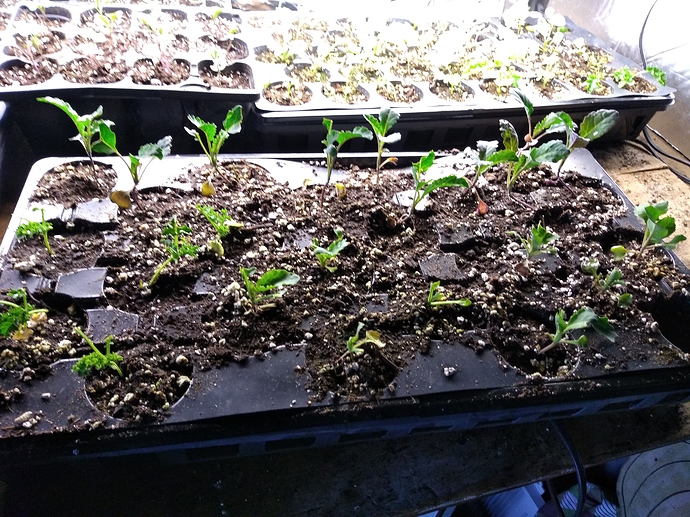 Here is my current crew. They are certainly looking better than previous years without a light or fertilizer! 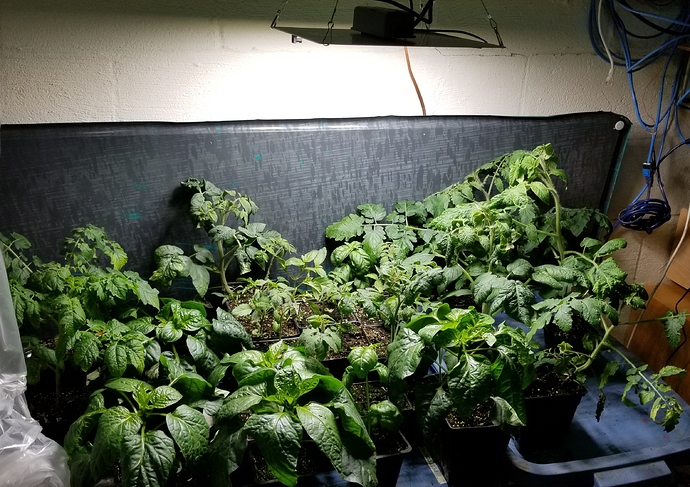 The peppers are really doing well. The tomato rootstocks took forever to get going but they are finally going, they are the smaller plants in the middle. Still too small to graft to. They and several of the tomato varieties were not happy as starts for some reason. But all plants are happy now

Those are so big. I’ve done the same thing for five years now for tomatoes, peppers, and eggplant and it has worked well. I start them around March 4th and pot them up into red Solo cups. 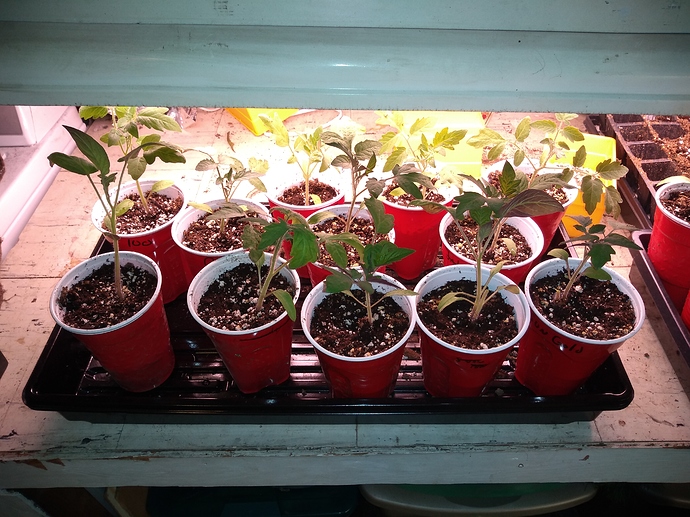 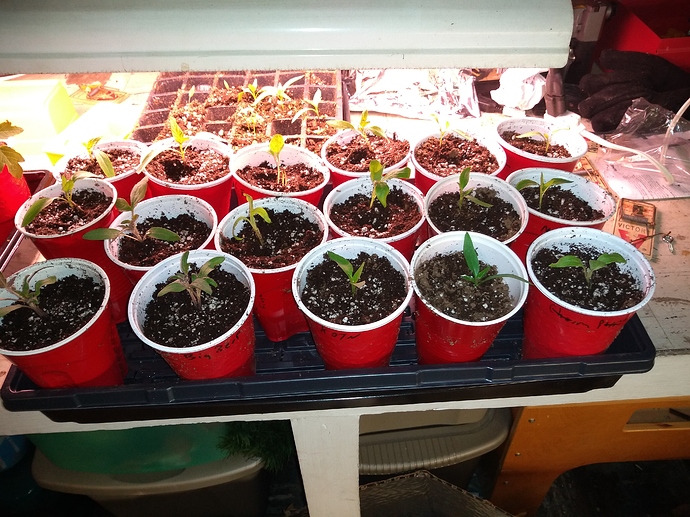 Since our last frost isn’t until early to mid June I don’t start things too early - mid March for peppers, onion, perennials, and a few early cherry tomatoes and lettuce.Early to mid April for everything else. Mostly I start them in clay pots, with homemade potting soil, inside by the woodstove with temps 65-75. When they germinate they go out in the attached greenhouse, temps 40-70. When they’re big enough most get transplanted into wood flats. Sometimes into an individual clay pot. I’m in and out of the GH a lot and often mist plants, pots, cuttings. I think the clay pots helps keep me from overwatering. 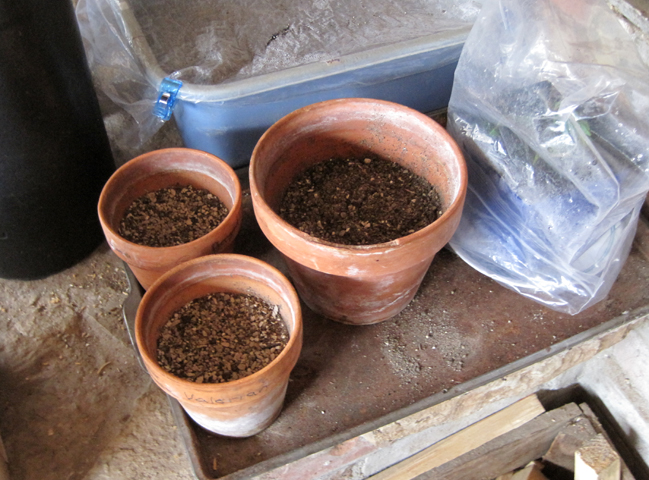 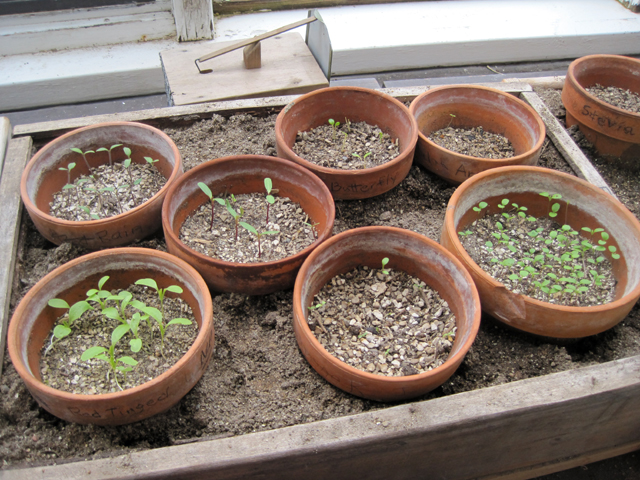 I happened to have an emtpied flat on the bench when I moved these pots to the GH so I set them in the dirt - figure it will help keep them moist.

Some things like onions I start right in the flats. Overall I find the flats easier to manage and utilize space on the bench, which gets pretty crowded as spring continues. The plants seem to like it. 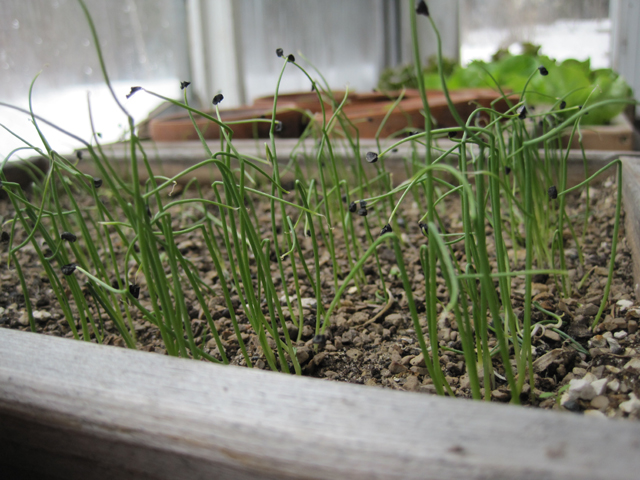 I did have one surprise this year. This morning I went out in the GH to turn on the LED light-strip (over a bed that doesn’t get direct sun now that the sun is moving north). I looked eveything over as I usually do. But something was missing. My nicely growing pepper seedlings!! The entire 8" pot, and … yep the smaller pot of another variety. A few other random seedlings but mostly nothing else touched. !!! Well, not too much of a surprise. We do have an occasional mouse/vole/shrew in the house, and the greenhouse is right off the entryway where the cat has her own in/our door. It’s possible a small creature would come in on its own, but it’s also quite likely one was imported via cat mouth (a few days ago I had to remove a panicked chipmunk from the house). Sigh… I replanted the peppers, thankfully a very early variety, but stil… I put six traps in the greenhouse (you can see one behind the flat of clay pots) but haven’t caught anything yet. It’s possible it’s made a get-a-way, or is a shrew which unfortunately seldom sets the traps off. I could put the cat out there but she can do more damage than a mouse (all that dirt to dig in…). So, Happy April!
(ps - white footed mouse, transported far, far away. No more grazing in the greenhouse, except by me (lettuce & spinach, not seedlings).

If its voles…try those easy set traps and put a little piece of apple in them. Regular house mice go more for the peanut butter.

We are having an early warm spell so I set things out this morning:

Its hard to tell from the picture as I buried the stems some, but the tomatoes are as thick as 1/4" at the base of the stem, they really grew! The peppers are also very thick. I feel this is by far my best set of transplants. The only downside is the rootstocks never grew much. I did end up grafting them a few days ago with side shoots on the big plants as the scions. The plan is to set them out somewhere near the non-grafted ones, so if the non-grafted ones fade the grafted plants can take over…

You are a brave man. I usually wait until the 20th and I’m a bit south of you. But the forecast does look good and I’m tempted as well.

6-10 day forecast for the North East looks average or slightly warmer than average on NOAA. This spring has definitely been warmer than last year in my area. I’ve already began acclimating some of my potted plants and citrus to the outdoors in a partly shaded area.

That being said were still 3 weeks away from my last frost date.

Where are you Dimitri? I live in Langhorne, PA.

Yes this is far earlier than I usually set out so I am taking a risk even with the warm long-term forecasts. But my garden is right by the house in a very warm microclimate, for example blackberries there keep some leaves all winter. Also my seedlings were getting big enough that my single LED light was getting a bit small for all of them … time for those babies to grow up

i have the same problem but its not the light strength. running out of room to put the plants under them! cant put peppers out here until mem. day weekend. and thats into the greenhouse.

@scottfsmith This is my problem now too

By the way anyone that ready my original post, I’m going to go back and edit it now with the things I would have done differently.

I thought the method as you originally wrote worked very well, by using your light and fertilizer (Osmocote) I got way better results than I ever did before. I may buy one more light for next year, with that I should be covered indefinitely.

My grafts are still not taking, but they are also not dead yet. They are drooped over but still looking healthy otherwise.

Thanks, really happy that my advice worked out so well for you! In fact looking at your plants they did better than mine - especially the basil.

There wasn’t much I would change for next year except for trying worm castings in addition to a 1/2 dose of Osmocote and maybe adding more perlite to my potting mix.

One thing I might have done differently than you did: by not reading the label carefully I added a large amount of Osmocote, half a scoop to each pot. I didn’t use any other fertilizer. Maybe that helped. And maybe it was too much for the rootstocks. My mix was pure peet seed starter.

Update on my quest for paprika pepper germination. In a final attempt to get these darned peppers to germinate, I half heartedly stuffed them in damp paper towels (as I was), ignored my seedling heat mat, and placed them directly under my grow light. 4 days later Boom! Germination. 4/5 of my remaining seeds germinated over the next week. So if anyone was wondering, paprika peppers seem to require light for germination. You’re welcome, I just saved you 10 weeks of misery.

Almost time to plant things out in my area. Need to water pretty much every day now to keep the plants hydrated at their current size. Depending on how the favorable the weather forecast is I might even be planting things out this weekend.

Tomatoes and peppers are going crazy this year, and I can already see flower bud formation. With some luck I will be doing my first harvest mid June.

Alpine strawberries started from seed were planted out about a week ago and seem to be doing well.

Cucumbers and melons will stay inside for another week or until night time low temps are consistently above 50°F. I also intend to do some grafting on them at this time.

Only disappointment this year has been basil which was also a problem last year. Its’ definitely related to some kind of fertilizer issue but I cant tell if I am using too much or too little. 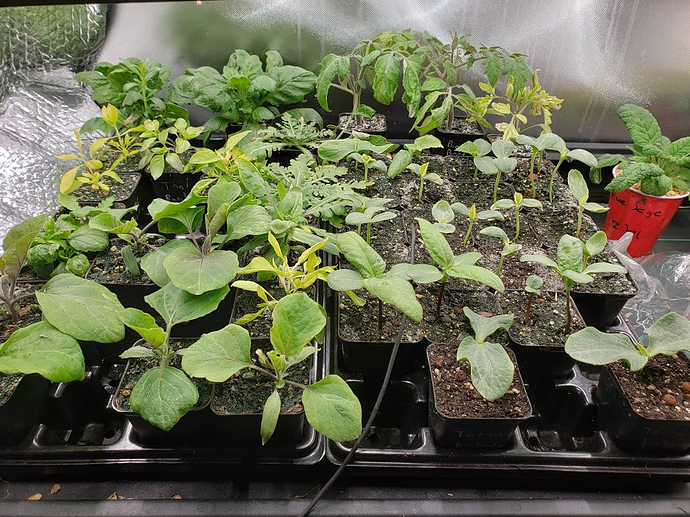 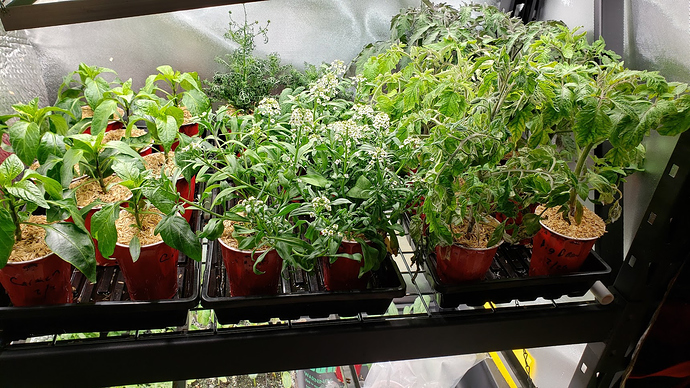 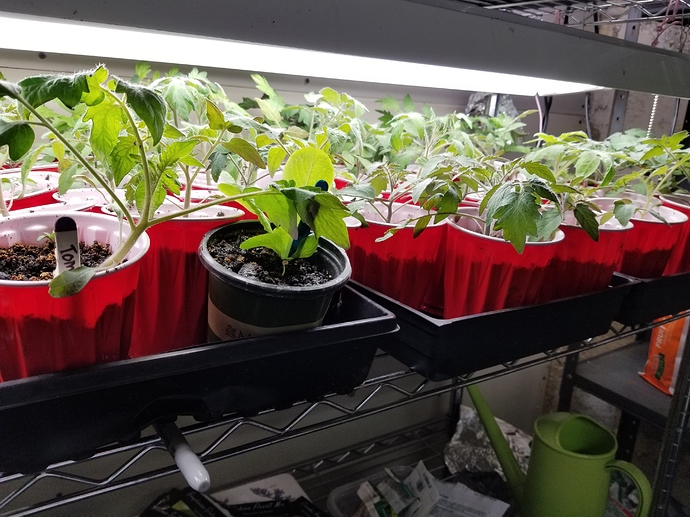 20190412_164734.jpg4032×3024 3.6 MB
Tomatoes are doing well this year. I stopped adding peat and instead use a compost and perlite mix with diatomaceous earth. Had big issues with fungus gnats last year and this year, and mixing the de into the soil has eradicated them. The peppers especially appreciate that. I had almost a total failure last year with peppers. Looking good this year though. Had to use bottom heat to get them to sprout in my slightly cold basement, but they’re off to a good start now.
← previous page next page →