Every year I do some fruit exploring during apple season looking for interesting historic varieties and also seedling apples with (hard)cider potential. A great apple year here in Maine has allowed me to evaluate quite a few different trees, and I want to share one jaunt in which I found a few trees with history.
I live in the foothills of the White Mountains, and like go into the National forest areas to hike. The CCC planted some seedling orchards in the 1930’s in a few areas, and I’ve had my eye on them for years, likely they planted seeds of whatever dessert apples they were consuming in camp. Untended trees which are barren some years have a bounty this season, and so I sampled fruit from a few dozen of these trees a couple days back as I walked in the tropical drizzle we’ve been having…
A few were palatable enough to eat, likely Macintosh seedlings.
I found a couple which fit the catagory of bittersharp, having both acidity and astringency.
One was a dead ringer for Chestnut Crab, except for the powerful flavor-a spitter that might bring some body to,a blend if used in small proportion so as to not overpower with the acidity.
I was excited to find one which could very well be of vintage quality, able to make a single varietal cider because it seemed quite well balanced with great sugar, acid and tannic elements. Very little pest or disease damage. Plus it has a ‘wooly’ textured flesh which makes for great juice extraction when pressed. Lovely fruit, hue of a Golden Delicious splashed with an uneven russet. I will attempt to return in late winter/early spring for scionwood.
I will bring some of these finds to the Great Maine Apple Day to share with other cider makers, should be interesting to have their evaluations.
Pics to follow…

Brix tested between 14-17 for both of these. 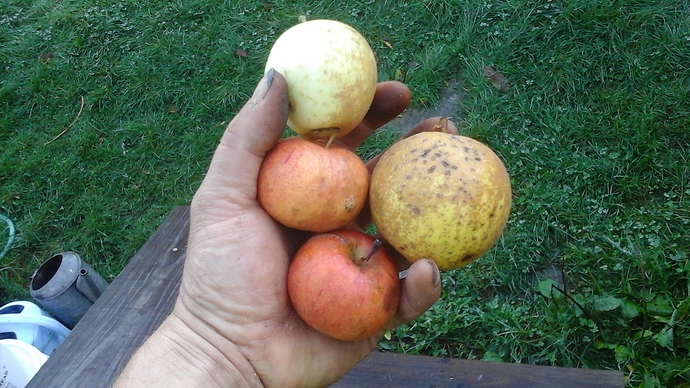 Now I just need to come up with catchy names, patent them and I will be set for life!
Kidding of course. A fellow in Vermont did just that with a seedling, ‘Franklin’ and sold the rights to Starks.

Love it. If I lived in mid Massachusetts I’d do this to old farms and woods. Not much around here to scavenge.

I have been racking my primary fermentation vessels (mostly 6 gal buckets) into glass carboys, and any overage has been bottled…and consumed more quickly than I care to admit! Anyways, preliminary 'testing ’ has been quite good, I am pretty confident that some of these seedling finds are going to bring some magic to the finished product, and are worthy of propagation into my home orchard. I think there is some real value in finding locally adapted seedling cider apples, they have proven themselves in hardiness, productivity, and finally, quality of finished product (will update in 6 months when proper bottle conditioning has occured).
I am excited to have a nursery row dedicated to found seedling grafts, many come from here in Maine, where some friends and I have explored for cider-friendly apples (Rocky Ground, Portersfield, Whaleback Cider are a few of my collaborators ), and Massachusetts, New York. Fedco has been a great source for scionwood, like ‘Gnarled Chapman’, a find from upstate NYS. They have a few seedling finds available as grafted trees in the catalog as well
The trees I grafted over will be ready for planting out next year and my hope is that these will be a better choice compared to European cider varieties, which are the mainstay of most real hard cider made currently, helping me to create a true American cider with indigenous varieties.
I am also a believer in the open-source ethos that has spread these finds around. Should anyone care to trial some, just let me know…

Forgive the novice questions, please. I don’t understand how the different apples make for different cider. If done properly, won’t the yeast convert all the sugar into alcohol? Is it the other components, such as tannins or something else, that change the flavor of the finished cider?

A few years back I made 5 gallons of hard cider from locally sourced apple cider. I’m not sure the exact recipe, but I put the apple cider with brown sugar and an ale yeast in my carboy and left if for several months. I then bottled it. It tasted like a bad white wine. No sweetness and not tasty. It seems a lot of the bigger hard cider places will add sugar and flavoring when done fermenting.

Gathering your own cider apples is an awesome project! Best of luck for a tasty brew.

I have yet to try a homemade hard cider. I have a friend that makes fruit wine that I really like. I am not sure how difficult it is to turn out a great cider at home but it sounds like you are experienced. His fruit wines can be really good but some don’t turn out.

No such thing as a novice question, we are all learning…
Different apple varieties will bring different characteristics to a cider. Some apples are higher in sugar, pH, tannins, phenols. Many cider apples arent good eating out of hand, ie, spitters! In particular, when fermented to full dryness, what remains are acid, tannic, aromatic flavor components. If these are not in balance then the resulting brew will not be all that good to drink. Most commercially available apples in the US are dessert types, which have acidity and sweetness, but little astringency(tannins), and which when fermented to dryness have a thin and sour flavor. Real cider apples will bring a richness and full mouthfeel that is a result of the tannins they contain. Some heirloom apples make great cider, like Baldwin, Northern Spy, because they have a well-rounded flavor. In my search for seedling(wild) cider apples, I am most keyed into the tannic aspect, and also a LACK of acidity, as I blend these with the more readily available dessert-type apples to create a balanced cider. Yeast choice, fermentation conditions are other factors I won’t get into at this point
Mass-produced domestic ciders use tools like back-sweetening and flavorings to cover up the inherent inadequacy of using dessert fruit to make hard cider, and also to satisfy palates used to sweet stuff. Not my cup of tea!

Sometime when you are bored in the middle of January you should do a hard cider thread, I would find it very interesting

Jesse,
I will provide an update later this year but so far I’ve had no problems growing Kingston black https://www.orangepippin.com/apples/kingston-black. I will know more once it fruits because as you know it’s notoriously hard to grow. It’s said to be the standard in hard cider apples. They are truly beautiful little apples
https://www.orangepippin.com/opimages.ashx?i=147226_55215e45f25e4054ab3c.jpg&s=l

How many cider apple does it take to make a 5 gallon batch of hard cider? Are you pressing these yourself?

Depend on how juicy they are, usually around 3 bushels. I have a small basket press.

And in that thread, someone can explain to me the difference between making cider and making Applejack.

It kinda seems like cider distilled by ice formation. It just piques my interest and makes great pie crust.

I think the concern would be increasing the methanol

This isn’t directed at you, but more in general: if you’re seriously getting into making your own alcohol, you should be able to remove a significant amount of the methanol via fractional distillation. Methanol’s BP is 148, whereas ethanol’s BP is 173. That’s a wide enough gap you should be able to burn most of the methanol off while leaving the ethanol intact with a few bucks invested into glassware, a mercury thermometer, a hot plate, and some tubing.

And yet, it does not seem like people do this. Is there a reason why?

ETA: I’m sure you’d probably lose some ethanol as well, and you’d probably not be able to get rid of all the methanol—but for something like ice apple wine, where the amount of methanol can discourage drinking more than a glass or two, it seems like it would be worth the effort.

There isn’t going to be any more methanol in there than you started with, just less water. I wouldn’t worry about it. But I don’t like apple wine anyway, so maybe I’m not the best judge.

I think the biggest reason is i havent seen any evidence of significant MeOH contamination in typical home ferments. It is a very minor byproduct generally in making fermented anything under typical conditions…to the best of my knowledge you would have to work pretty hard to hit toxic levels