I bought a Selena tree about 3 years ago from Mehrabyan Nursery in New York. I bought it on Surek’s recommendation. I am no expert on Peaches and have been growing them only a few years. I have a refined palette for apples and many years of experience growing them, but not peaches. I just know what I like. I think it is a new variety. These are my notes.

I didn’t get any this season but did the last- they are in my nursery but not my orchard. They were among the best peaches I tasted last season. A peach of a peach. That means they get a point or two higher brix than lesser peaches and they aren’t bred to be low acid so they have a nice balance. I hate every low acid peach I ever tasted because I’ve never had one that got above about 16 brix. Subacid nectarines can be good because they sometimes come in the 20’s, which is hard to do in the northeast. .

The reason I didn’t get any this year is because all my later peaches in my nursery were pilfered by something or another, it’s not because they were among the varieties that didn’t set fruit, like Earnie’s choice and some others. It appears to be among my more hardy peaches that weren’t wiped out by our very early spring deep div of 19F- before peaches were even showing any green.

I ate another one last night that had been on the counter for a while and it blew me away.

I keep trying to graft Selena (and Contender) onto my Reliance tree. I am not so fortunate (if I may blame fortune in place of my ineptitude) when grafting peaches.

The one I ate last night after sitting on the counter for 4 days had the most peachiest flavor I have ever tasted. It was an explosion of flavor.

It was on my list this year, based on Alan’s recommendation. Unfortunately it’s in the same window as my Carolina Gold. No room for another peach tree in the same window. Can’t graft it either because it’s under patent (NJ358). Sigh.

It did well in South Carolina (Clemson’s trial).

Well, this raises a good question. If one buys a tree of a variety that is under patent is one permitted to take scion wood to graft from and then destroy the originally purchased tree? One bought a tree, the patent holder was paid and the consumer ends up with one tree. It is just on a different rootstock.

I’m not worried about that sort of thing.

In this article they say that they are ‘neat’ peaches which means that they are less messy for customers. Also they talk about Gloria, Evelynn, and Tiana… other Rutgers releases. 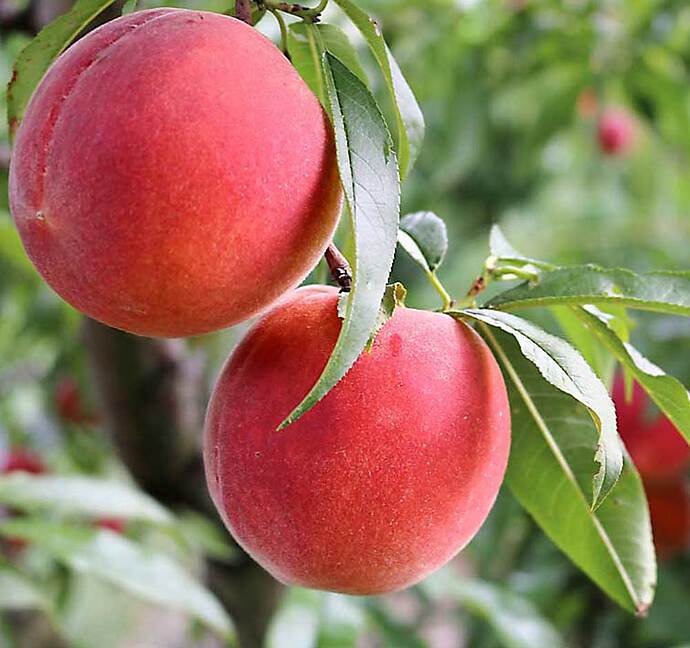 No napkins needed with neat peaches

The Rutgers University tree fruit breeding program is offering a lineup of firm-fleshed “neat peaches,” including the freestone Gloria (shown here growing in southern New Jersey), that don’t drip juice the way traditional varieties do. They also are...

Nice to see where the tax dollars go. I guess l never really thought of peach juice squirt as a big negative.

If one buys a tree of a variety that is under patent is one permitted to take scion wood to graft from and then destroy the originally purchased tree?

If a tree is patented, any propagation of that variety (grafting, rooting) is technically patent infringement, even if you also destroy the licensed tree. As long as you’re only doing it in your own collection and not telling people about it online, then no one will know about the infringement, but it’s still technically infringement.

I’m not worried about telling people about it online either.

Mostly you’re fine, but as an IP lawyer (though not that kind), I’d just say there are some very litigious patent owners out there who keep entire law firms in business scouring the internet for people admitting to infringing their patents so they can send cease and desist letters or file lawsuits. I doubt most universities do that, but don’t know for sure.

I would worry about it if I were planting an entire orchard.

Honestly I think it’s B.S. that public universities don’t just release all their varieties to the public domain. I doubt they have law firms looking for lawsuit targets the way private patent holders sometimes do.

I wouldn’t sweat about it. Regular folks infringe on patent(s) all the time (knowingly and unknowingly). Nobody is going after you for making a copy of your purchase.

Around here, “under patent” means “don’t ask for scion.”

Perhaps I am dangerously making this interesting discussion into a different thread. My apologies. But I am a bit curious how those in the IP law space would differentiate this from the fair use of copying songs from a LP that I purchased and putting them onto a cassette. In my mind since I bought the embodiments of the copywrite material and therefore the right to use them for myself, then that would be okay to make a copy on the cassette; I could only ever listen to either the LP or the cassette at any given time anyway. In the case of the genetic material that is the tree if I many multiple copies then I could get multiple uses, but if I only ever had 1 copy…

Definitely a bit off-topic! I’ll join the detour, though…

There’s no “fair use” in patent law like there is with copyright law. But unless you’re selling or trading any patented trees you’ve propagated, there is a very low chance of enforcement by patent owners, and I’m sure most of them wouldn’t care even if they knew about it where it’s a home grower with an “insurance” backup of a purchased tree. But it still may be best to not post about it!

I knew someone in law school whose summer job before our last year was just browsing Internet forums and marketplaces looking for IP infringement for a big law firm, both counterfeit “luxury goods” and also patent infringement. He decided not to become an IP attorney after that summer!

I would worry about it if I were planting an entire orchard.

Laws are funny things, if they are enforced they become real. You can drive 60MPH where the law says 55 is the limit and pass police cars that ignore you.

Now the plant patent laws are really made to stop commercial production of fruit that doesn’t pay any royalties for breeding it, but the breeders don’t really care about small home orchards one way or another, most likely.

Has anyone on this forum ever heard of enforcement of a single graft in a small orchard of a variety still under patent?

I understand the ethical reason for not doing it anyway, but what irritates me is that there is no venue for a home orchardist to pay a royalty to graft a patented tree, especially when we aren’t allowed to purchase such a tree either.

As far as rationalizations

, they usually don’t add up to ethics, but hey, nobody’s perfect. Some breeches of ethics are too miniscule for me to care about. Why even bother to rationalize them? Or publicize them.

Anyway, it would be useful to have a member compare Carolina Gold to Selena directly. My hunch is that Salena will win out. Certainly my favorite sales person at ACN picks it.