Shaping up to be a big blackberry year!

The blackberries are at their best this year. They will soon be coming in by the gallons in July! This is a link of what they did in 2015 Blackberries by the gallons . This year we have twice as many blooms and several new patches coming into production for the first time. The bloom time makes these a very reliable crop. We have never had a complete blackberry crop failure. As I look across this sea of buds I realize July will be a busy month. If the rain continues the berries will be very large. 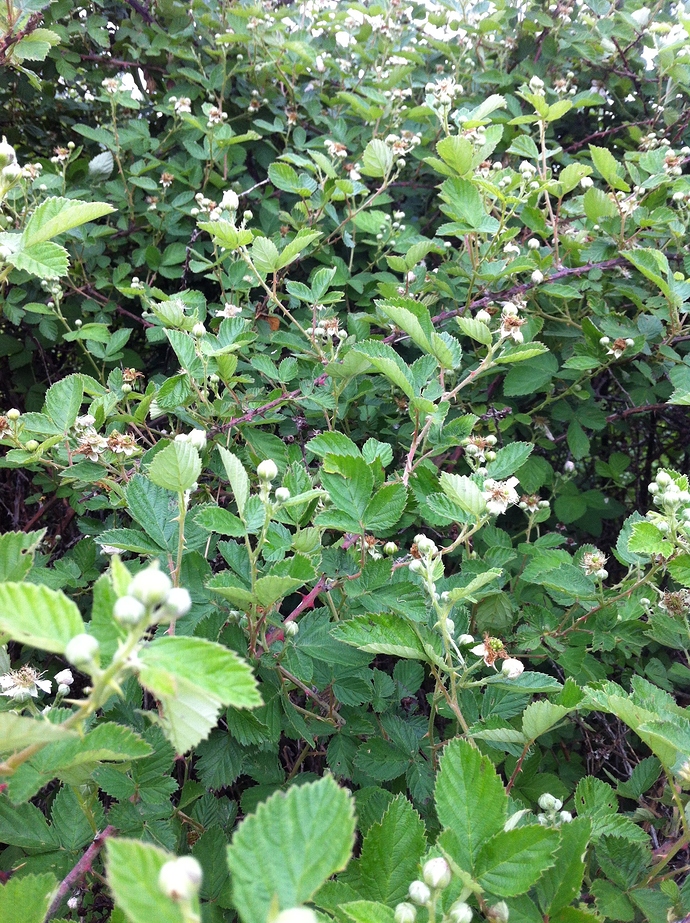 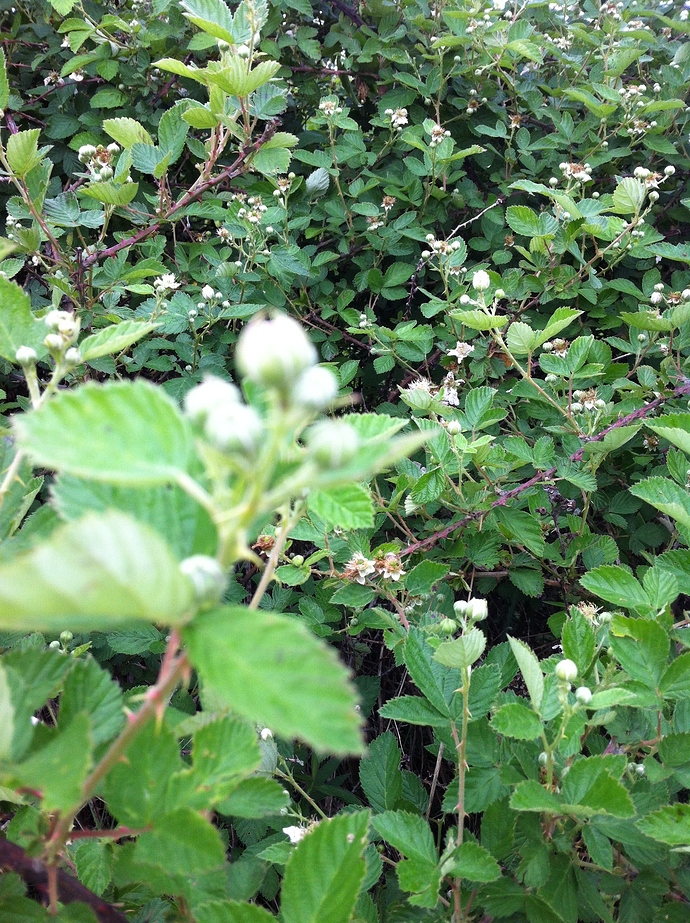 I wish you plentiful berries and a lack of SWD!

Same here. Polar Vortex of winter 2014-15 killed my blackberries back to the snowline, so no blackberries last year (or blueberries, or apples, or pears) … but it looks like they’re gonna be making up for lost time this year.

Gooseberries and currants already had fruit well formed when they were hit by a late frost 12 days ago. Lost just about all of them, but my blackberries were just blooming. Then the first flowers bloomed and had “black eyes” so I was a little worried. Now the rest of the flowers are blooming and they look good, I think I’ll be loaded. Mine aren’t thornless, however. I have Illini Hardy and Darrow. I think the thorns on these are worse than wild blackberries, especially the Illini Hardy. Blueberries handled the late frost fine, strawberries were hit but ended up putting out about a 1/3 of a crop. Haskaps seemed unaffected, doing good. Its good to have a variety to handle temp fluctuations at different stages. It seems like blackberries will be one of my mainstays. Hopefully my varieties will taste ok.

I love blackberries so much, those pictures bring tears to my eyes! lol So beautiful! I wish you all the best come July. My canes are doing good too here in zone 12b. Been able to harvest dozens of large berries and there’s still more buds and new canes emerging every week. I’ll be darned if they just keep growing indefinitely!

I dont have alot of black berry square footage, but I have a ton of blossoms this year as well.

I dont have alot of black berry square footage, but I have a ton of blossoms this year as well.

I took this pic the other day of some Triple Crown just starting to bloom. 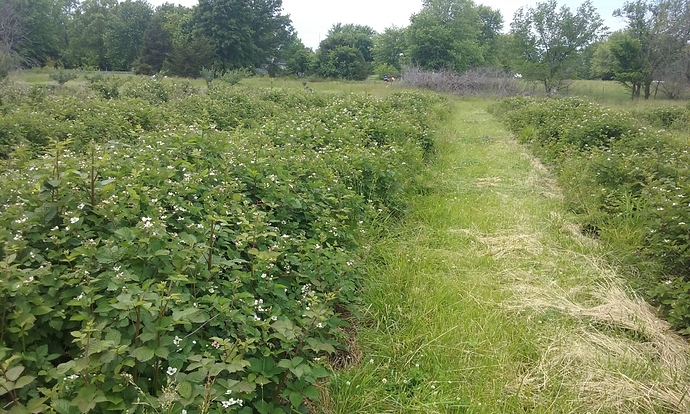 Thats still alot of square footage compared to me!

I might have 1/20th of what you have pictured. I am not huge black berry fan in terms of flavor I just like the diversity in my garden.

My blackberry are also flush with fruit. Mild winter here helps some. Gooseberry plants also are full. Raspberrys are having some problems. I will take what I can get. I better try that blackberry wine I made from last year…or find another recipe. I will need to put them into something!

Hey olpea are your triple crown on any type of support? I grow mine on supports and can’t imagine those monsters being free to go where they want.

I have some Triple Crown at the house which I built a trellis for several years ago. It works pretty decently.

I decided to try to grow Triple Crown at the farm without any support structure to see if it would work.

At the farm I’ve been keeping the TC pruned really low by continually tipping the canes. My son takes a sword and tips the canes, so his way doesn’t take too long. The plants do put out lots of laterals which grow really long. They eventually hit the ground and root, which is a bad thing because the stand is getting too thick in places.

I really don’t know if this is going to work long term because the stand may get to thick. I suppose I could run a push mower through the rows every so many feet and spray some herbicide on the mowed patches to try to thin things up a little bit.

I’m also trying something new by not removing the spent dead canes in order to give the live canes a “trellis” of a sort.

I’ve never heard of anyone trying any of this, so it may not work. We only started picking berries off the patch at the farm since last year. They were planted in 2012, so it’s a fairly new patch.

Wow you guys are killing me. I really like blackberries but I have had no luck getting them to go here, both times I planted them they winter killed. Nice job!!!

Olpea,
When there gets to be a lot of dead canes one method I use is I mow the entire row down on my blackberries in the winter. That takes the row out of production two years. The chunks of cane are great for the dirt. If you let the row move over and mow off half of it you can keep them in production. I had to buy a mower with a 42" cut to make that happen. I like the method of mowing off half of the old row best because it allows the soil to rest every 5 years. I have about 2 acres of producing berries now after 21 years in production. The first 3-5 years were getting them established. My canes as you know are grown without support.

I really don’t know if this is going to work long term because the stand may get to thick.

@Olpea. @clarkinks I think you are on to a technique that will work. Before seeing your plants all I have seen has been on supports. Sometimes thinking a little outside the norm pays off. Wish I had enough property to try this method. Bill

If you let the row move over and mow off half of it you can keep them in production.

I think I like your idea better than mine of “segmenting” the rows by running a push mower every few feet. My rows are getting too wide anyway. I planted them 15’ apart and now I can barely get a 7’ bush hog between the rows, which means the blackberries are 8’ wide. They could probably stand a little narrowing up. Thanks.

I which @blueberrythrill would chime in on this topic.

When there gets to be a lot of dead canes one method I use is I mow the entire row down on my blackberries in the winter.

Which variety are you growing? Sounds like your process is working great!

We mowed alternate rows when we had several acres of Shawnee 20 years ago but they did not fully recover in one year. The thorns we so bad that we normally did not cut out the dead canes but just cut the hedgerow back with electric shear.

These are an heirloom my grandfather grew that have been in the family a long time. It takes years to get the new canes back in production. So 2 years to first berries and likely 3-4 to full production. If you manure the row at the same time 2 years might do it. It sure does a lot of good doing a mow over. Production is higher if you use a 42" mower I used a brush hog originally.

Its very interesting about the heirloom blackberry variety. You are very lucky to have something like that.

Some commercial growers in Georgia mow alternate rows rather than prune the dead wood by hand. It took several years for me to get mine back into production when I tried it, even with fertilizer and drip irrigation. It did help get the weeds and small seedling trees under control and the u-pick customers commented about the improvement.

I now focus on growing a much smaller area. With the small area we can concentrate on the quality of the fruit and the quality of the picking conditions for the u-pick folks since we no longer sell any of the blackberry pre-picked.

Obsidian a few weeks away til ripe. Brady 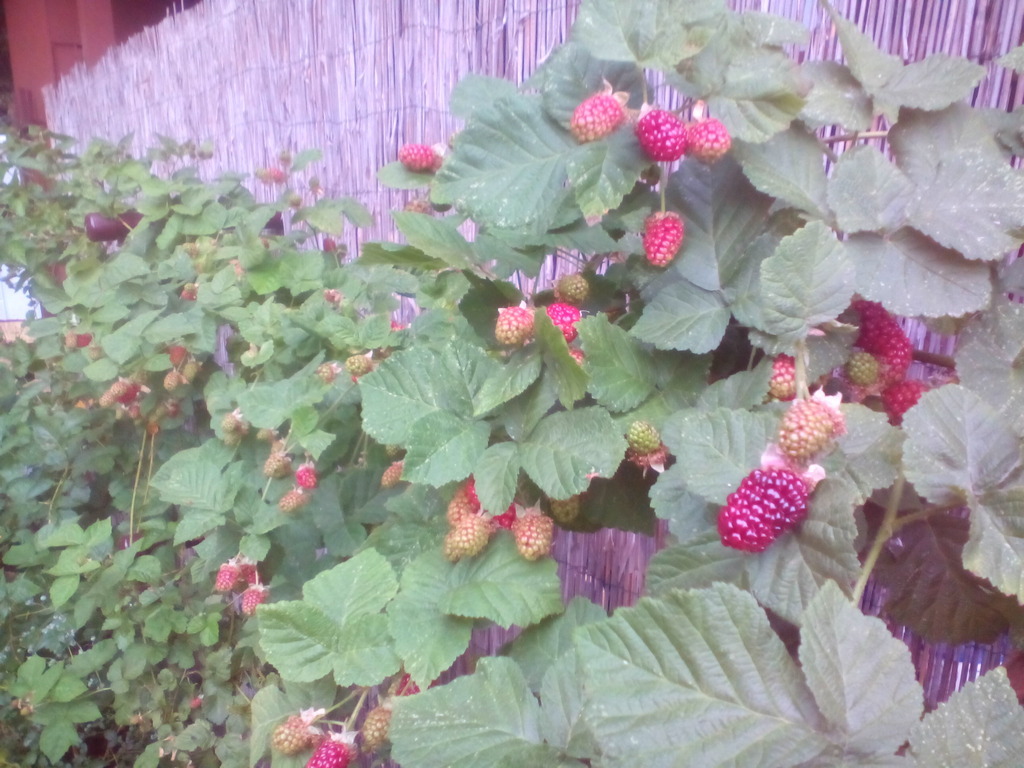 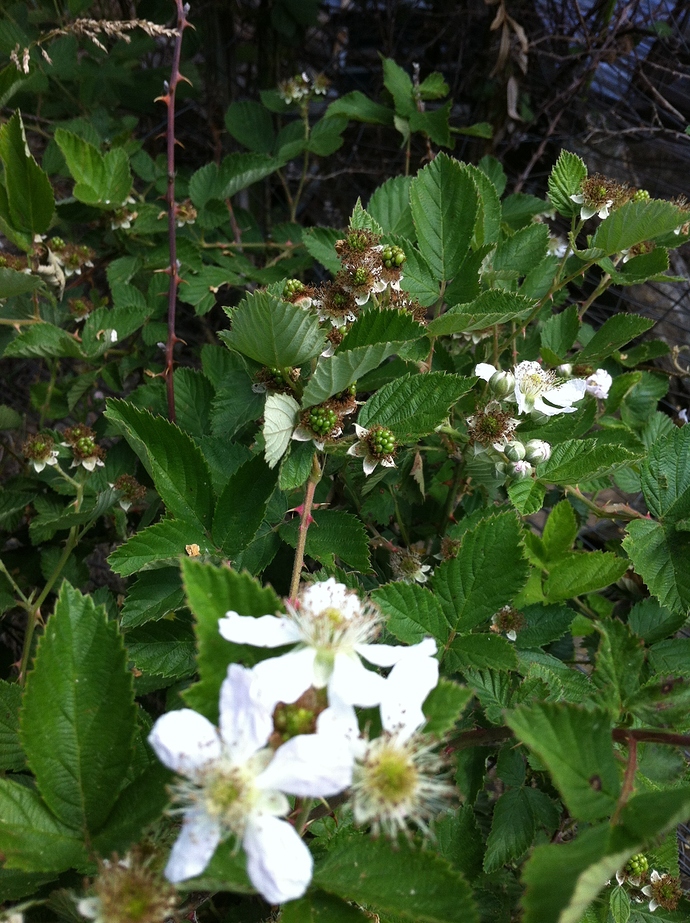 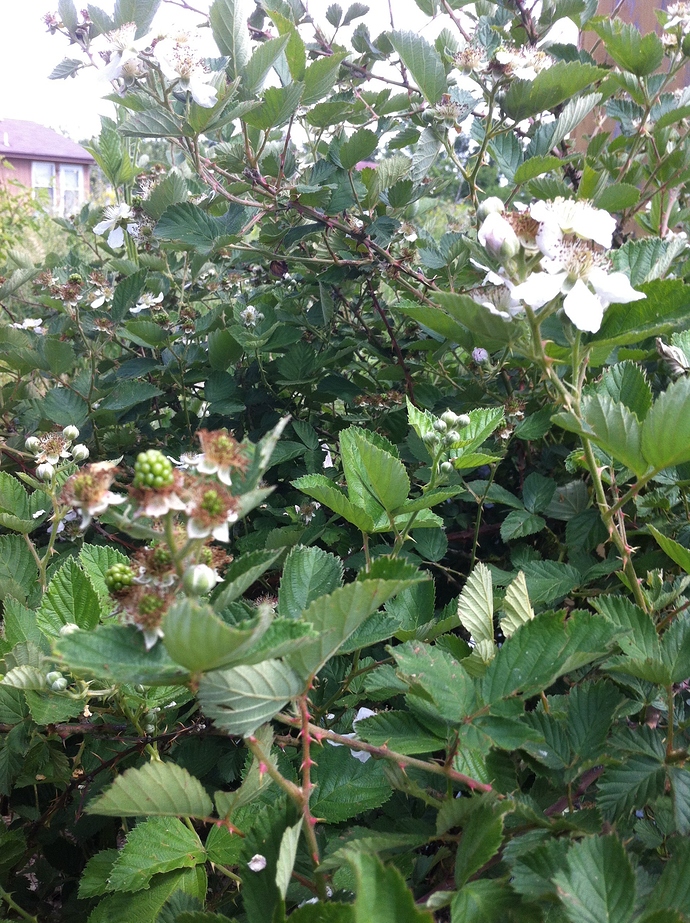 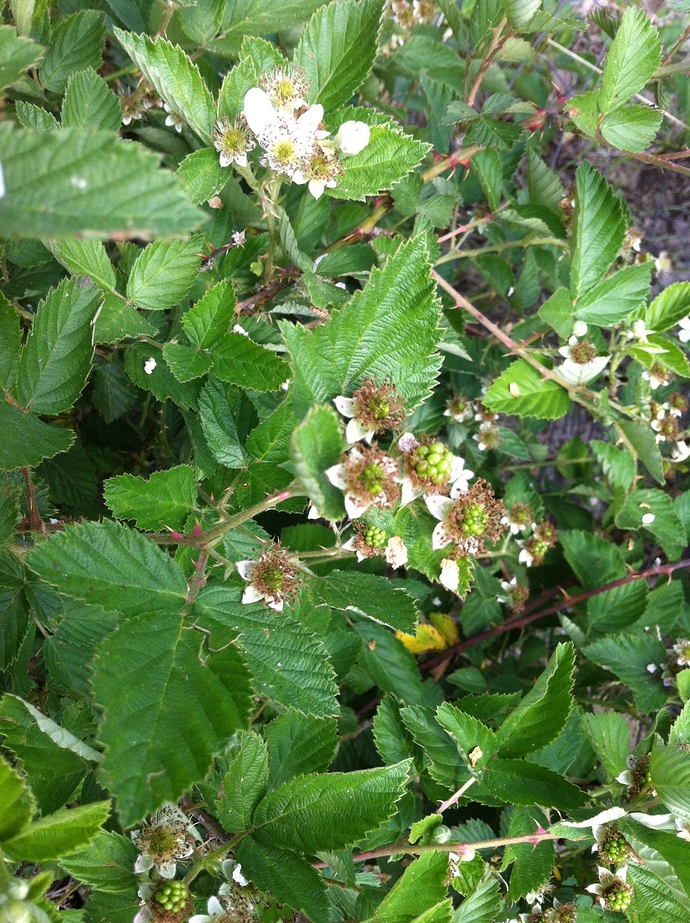