Should this branch be removed?

My thinking is that it should be cut off but wanted to get some opinions before I proceed. Reasoning being that the branch is larger than the leader. 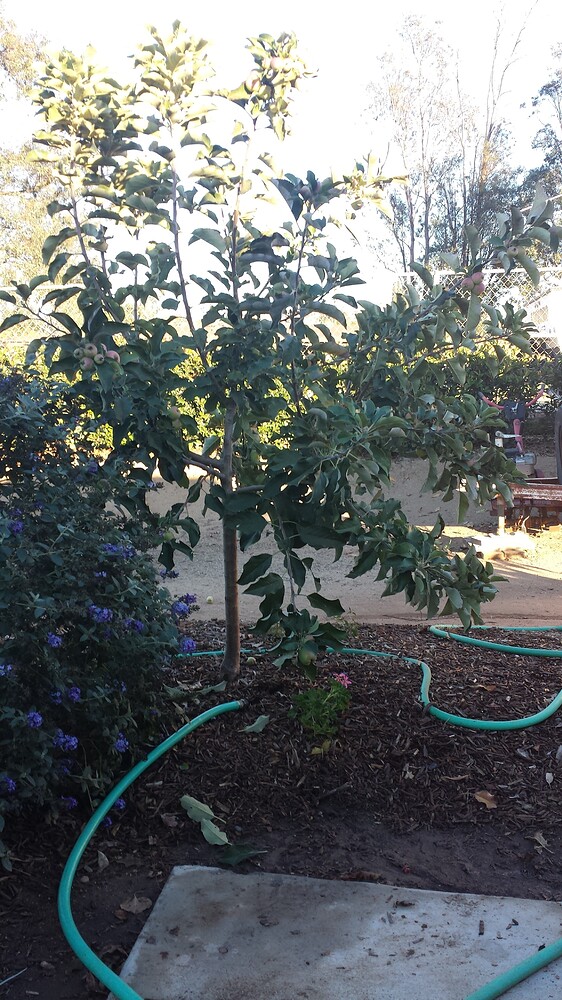 If you want a central leader it needs to go. If you want an open center, or how I grow mine…a bush, then it could stay. If kept summer pruning can keep it from getting too big.

I agree with Fruitnut. If you are going central leader that tree needs some other pruning as well. You have lots of shoots competing for top dog status.

Am trying for the central leader type for this tree (First time). I know I have some work to do with the uprights …got depressed when I broke a branch off my Empire so that ended my tree working for that day. I will be back at it this weekend.

Should I hold off on cutting the branches until spring and just tie down the ones that are staying? My apples trees never really go dormant so maybe growth will start if I prune now?

Easiest way to produce a central leader tree is to remove all branches more than a third the diameter of the trunk at point of attachment as soon as they appear and leave all other wood. Where an oversized branch is located where a better branch is needed, remove it with a bench cut. Leave all branches until tree starts fruiting and then select or begin to select your permanent scaffolds by eliminating nearby branches that are crowding them.

The tree in photo is already fruiting which suggests it is a dwarf. This only changes the approach a bit but the oversized branch should go. Most schemes call for the removal of all branches more than 1/3 or 1/2 the diameter of the trunk. I wouldn’t leave that branch for a moment. Even if you manage to subdue it with summer pruning it will be throwing everything out of wack until the trunk passes it in diameter. It will continue to intercept too much sap at the expense of the top.

Puggylover, the way I look at this is as a “who’s in charge” question. Your central leader should not be forced to compete with a potential usurper- your instincts to remove the pretender to the throne are right on. (My apple frankentree is a case in point, and that’s where I learned this lesson. Still, it ain’t the end of the world: a good decade plus after my indecisiveness let that happen that tree is healthy and productive. Just weird.)

Of course, you’ve already figured that out having learned from the above, but I thought I’d throw my two cents worth in for fun.

Alrighty. …doing this from my phone so not sure how the pictures will be…

Stripped all fruit and leaves off and pruned a lot off…now I am stuck at what exactly to do next.

Should I remove the other large branch or have I already took too much wood out? Maybe leave and tie down and take out next year?

Do I cut back remaining little branches by 1/3?

This is the tree that I purchased thinking it was sundowner on M7 but was obviously not as it ripened in june/July and was loaded with a second crop (Which never grew much larger than walnuts, so the chickens got them). I believe it to be Dorsett Golden and assuming it is on M7.

Hopefully the picks will be good enough for someone to help me. 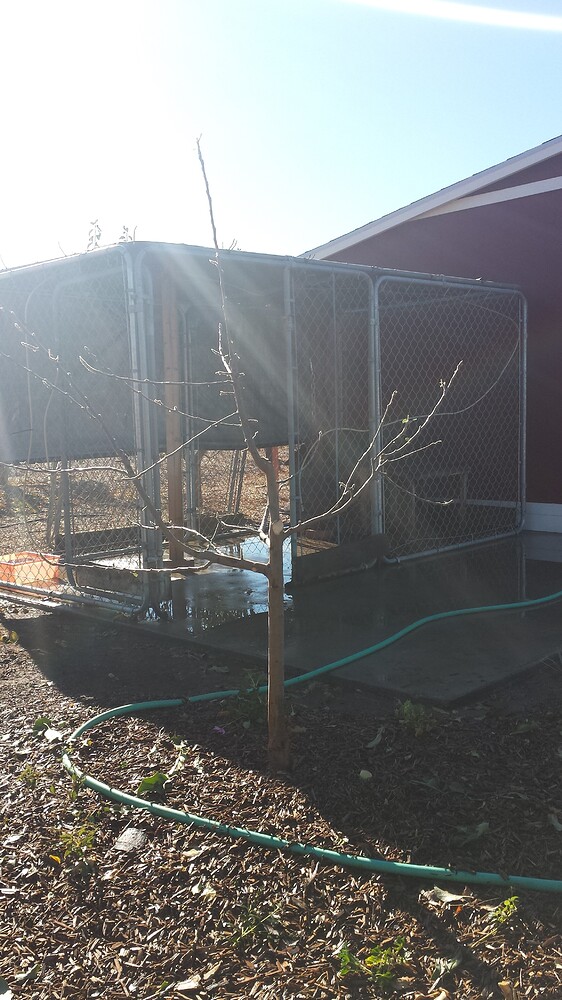 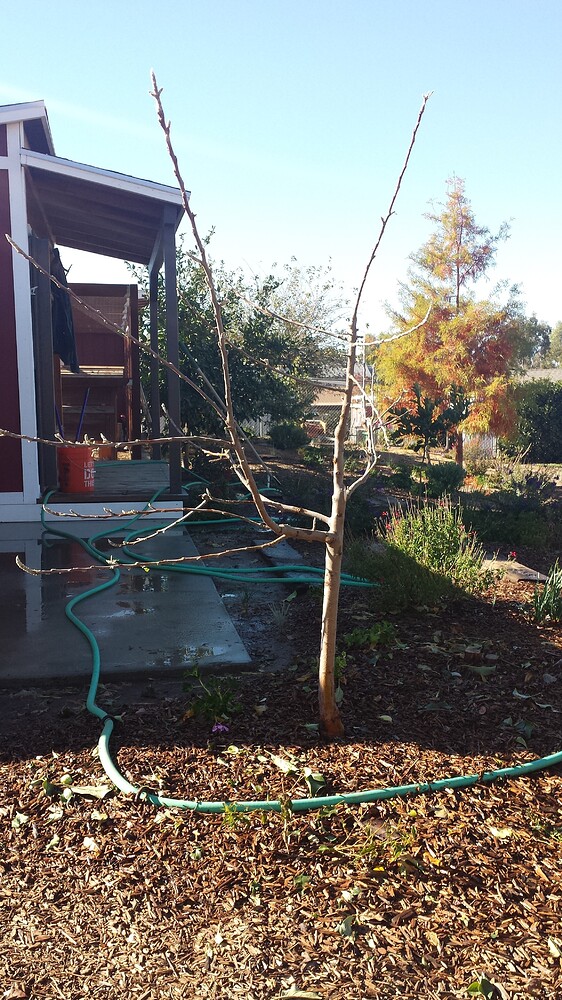 That pile of trimmings is not all from the tree…lol

I would remove the last oversized branch. It will otherwise excessively dominate.

Thought so Alan. Was just nervous about taking off too much wood.

Updated picture! Hopefully I am doing a better job. Tree will crooked with all kinds of character. Haha. 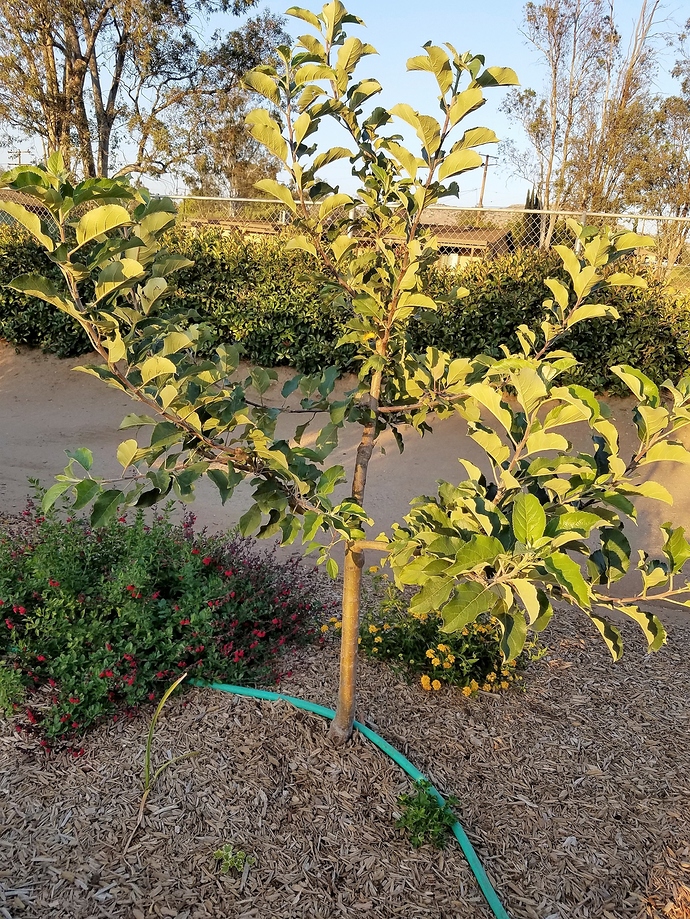 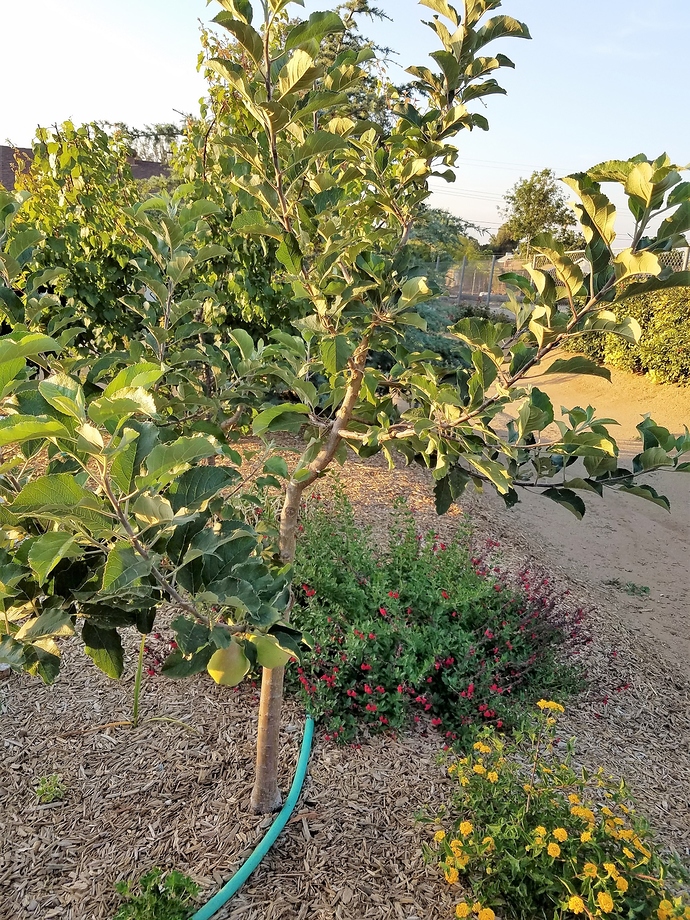