Sick Tree? or maybe just getting a little old ...? 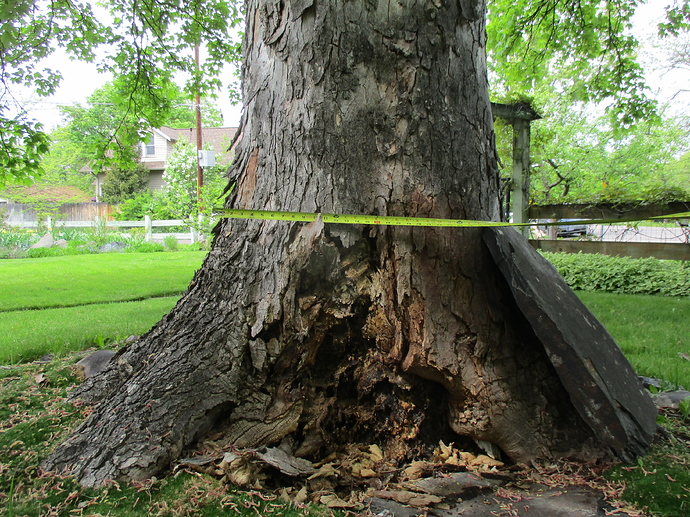 This is our old Sycamore Leaf Maple (acer psuedoplatanus), age uncertain but probably upwards of 75+ years. Some years ago this decay started to appear. Anybody have any clues as to the best way to deal with it? My wife wants to cover it with flat stones: 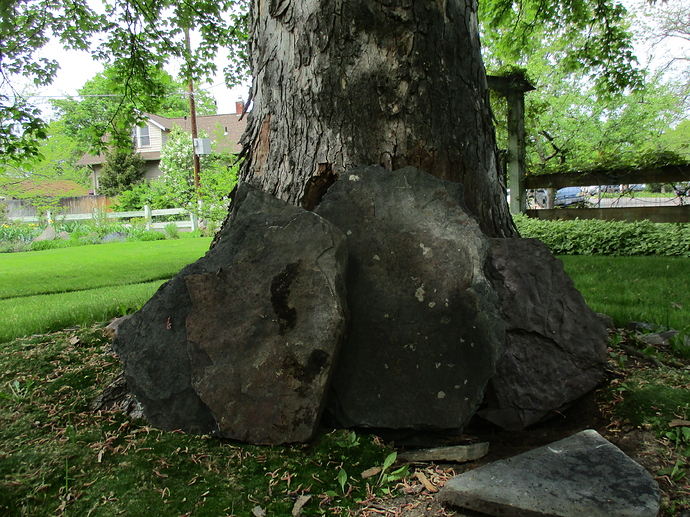 but I wonder if it would be better to leave it open for air circulation.

Nice old tree, but think how many little fruit trees you could plant there if you had it removed

. It would probably be an expensive undertaking though. I have a huge black walnut and several big silver maples that I would like to remove. I have taken out three mature silver maples since I moved here.

I would rather keep this magnificent old beast than have more fruit trees- and my wife feels more strongly about it still!

So that’s not going to fly. I imagine I’ll be carried out before this tree comes down. Hope so anyway.

Not that it’s a big deal or anything …

There is no benefit to covering that I know of and the stone will likely protect any insects that take up residency. Nothing will fix the current status of the tree, every living thing has a given number of days your old tree is just reaching the end of its.

Mark,
I would leave it as is. Everything in this life has a limited time and I’m afraid that old beauty is nearing the end of its time. I remember thinking the same of a raccoon den tree with a similar trunk which is still standing and that was 40 years ago I noticed that! It’s partially about genetics and partially about luck.

I have huge trees at my cottage and have been watching and observing the last 50 years. This tree is sick, but it may be 10 years or longer before it dies. Insects can tell you a lot. Carpenter ants tells you it’s rotted in the middle, they don’t cause damage just like to nest in rotted wood. Keep it as dry as possible. The stones won’t do much, you could fill that hole with cement… But probably nothing going to stop the rot. The outer flares look good, so it’s going to be years before it dies. The whole tree can hollow out and it’s still not dead. When it does fall when that happens, much of the wood is not good for much of anything. If you take it out now you could make a nice table with a lower slice of wood. Assuming it’s not already rotted in the middle.

If you want to extend the life of the tree I suppose you could airlayer a bunch of branches and inarch graft them across the damaged area.

I believe that damage may be a sign of fungal damage from Eutypella canker in your tree. Closely inspect to see if the indicators on the following link are consistent with the damage to your tree.
Eutypella canker

It does look like that, but I’ll have to take a closer look.

Thanks to everybody who has commented. I’ll get a local inspection and try to get a definitive answer and report back. The tree means a lot to us, and it’d be hard to see it go.

There was an article a couple months ago about a tree rotting at the White House. A while ago, they had tried to stop the rotting with cement. I believe the article said that the cement actually accelerated the tree decay or had no benefit.