Hello, I saw a post on tall spindle trellis design last October, but had a few more questions.

It seems the recommendation now is 6" end posts and 5" post every 30’ within the row buried 4’ in the ground. I looked at the Trellx spreadsheet and unless I’m missing it, it doesn’t really say anything about total length. If I am only building 95’ trellis, does everything still need to be as big?

I am having trouble finding posts in small quantities at 14’. I found 6" x 16’ posts and they are $60. For comparison I can get 14’ 4x6" for $28. I can’t find 5" poles. So if I could go slightly smaller that would be great. There may be a better source, but I’ve called most of the lumber yards, fence supply, and farm stores around.

That is over kill as far as I am concerned if this is just a trellis for personal needs. Unless you live on one of the windiest sites on the planet then you might want to go heavier. Keep in mind 10’ height is maximizing space and production for a commercial situation, no reason you couldnt put your top wire at 8’ if you chose to do so.

Here are links to a nice tall spindle orchard in Western Montana:

I think the photos say a lot.

I don’t believe 4 feet in the ground is required in most instances for line or end post but the “dead man” that the end post connects to would benefit from 4 feet in the ground. If you use dead men, the distance between the end post and the dead man should be the same as the height of the post (45 degree angle) for the support wire. The alternative is a “H” with 2 endpost and one horizontal brace post like you see on a high tensile fence, but it requires an additional post. If your endpost are set at an angle rather than 90 degrees you may need a 14 foot post

We used 4/5 inch post everywhere and one of the end post snapped last year when we had a big apple load and 80 MPH gusts. Only lost 1 of 34 rows but 2 of the dead men pulled loose. My rows are 100 feet long with only one line post in the middle (every 50 feet) and 30 feet would be a lot better.

A 12 foot post cost a LOT less than a 14 foot post and would give you a 9 foot top wire if it was placed 3 feet in the ground which is about as deep as you can dig with a tractor mounted post hole digger.

I heard Adams County Nursery sold trellising materials, so I gave them a call. The salesman I spoke with made it sound like they mostly sell 12’ 4-5" posts. He said they don’t use the 6" much. I asked how deep the orchards were putting the 12’ posts and he said as deep as they could get them but usually 2.5-3’. This is really conflicting with what Cornell and Penn State are recommending, so maybe those recommendations are overkill.

@marknmt those do look nice. It looks like they are using pipe. The trellises don’t look super high, but it is hard to tell without much for scale .

@blueberrythrill When you say dead man, do you mean earth anchors or the wooden posts that are used as anchors? I saw your post on a previous thread and was hoping you would see this. That is reassuring that none of the post pulled out during those winds. What type of soils do you have? We have clay here. I don’t have a tractor, so I would need to rent a post hole digger or mini backhoe. I know that does make it less strong. I was not sure if the posts would heave if I didn’t put them deep enough though. We are 6a here.

@39thparallel Sorry, but where do you source oil field pipe? How much was a section? Have your tree’s reached the top wire? I have ordered mostly G11, so I wasn’t sure where they would top out.

Thank you everyone for your responses. Such a great help

Look on Craigslist for oil field pipe. Most of it comes from Texas and is resold locally. I caped the tops so they would not fill with water and rust. I used stainless hose clamps and D rings to hold the wires because there is no way of drilling threw this pipe. Dug 4’ down by hand and dumped in a bag of sac concrete in each hole. This trellis should last at least 50 years. Trees are two year in the field on G41 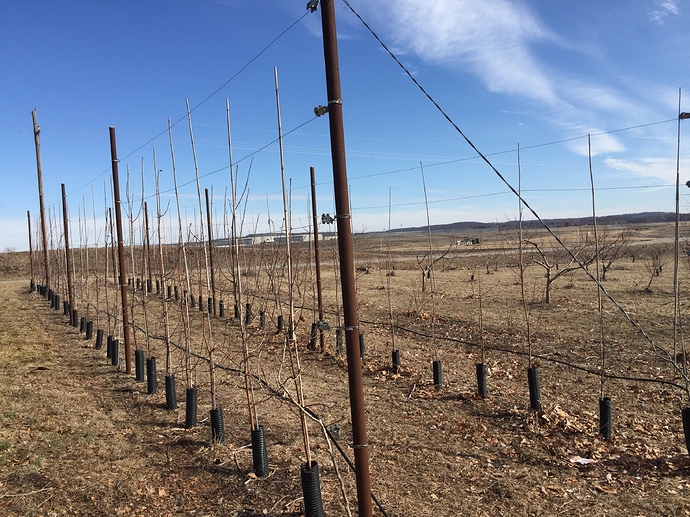 The trellises don’t look super high, but it is hard to tell without much for scale .

I don’t know how high they are, but I’m guessing not much over six feet. Michael Billingsley isn’t a real tall guy and he does everything from the ground.

When they planted the orchard they were able to get one of the newer, highly dwarfing rootstocks and I think they got production pretty quickly. They tie limbs down right away, I think to below horizontal, and limit the number of limbs pretty severely.

This is really conflicting with what Cornell and Penn State are recommending, so maybe those recommendations are overkill.

They have to be put deeper farther north to avoid frost heaves. Around here it is recommended to put everything at least 3’- 4’ deep. Of course it is no guarantee. My father worked for utilities company. They put the poles roughly 5’ deep, but poles a often got pushed out over winter. Apparently it can push out from side action if it gets a good grip on the pole.

When you say dead man, do you mean earth anchors or the wooden posts that are used as anchors? I saw your post on a previous thread and was hoping you would see this. That is reassuring that none of the post pulled out during those winds. What type of soils do you have? We have clay here.

Yes, I use wooden posts at the end of the row set at an angle and attach a wire to the top of the end post for support just like you see in the pictures. My subsoil is clay. I believe I cut 8 or 10 foot post in half for this purpose. Not sure how the price of earth anchors would compare to the cost of the post. I’m in zone 7B and I was surprised that a heavy crop load combined with high winds could snap a 4/5 inch post. Recently, I have seen pictures of large commercial orchards where the trellis failed and all the trees ended up on the ground, so I expect newer guidelines suggest stronger structures.

Gripples work great to tighten wires and be sure to use at least 2 inch barbed staples if you use wood posts.