I have been enjoying raspberries. Here is what surprised me:
Everbearing cultivar Anne offered fruit in the first week of June. So did BP-1 but in smaller quantity,

“Mostly summer-bearing” cultivar Prelude was not significantly earlier. Neither true summer-bearing cultivar Boyne, which will be ripening in the next couple of weeks.

So in case anyone is seeking a long raspberry season, so far I haven’t required the summer-bearing cultivars on the early end. We can probably get the same result with just everbearing cultivars? And so far Anne is very early, and maybe BP-1 also.

Nicole apricots have been ripe every day for the past week. This year was the best flavor ever. I would describe most of them as meeting the same level as the Blenheim. They are very sweet and tangy with that intense apricot flavor, like you are getting all the flavor of a great dried apricot. The flesh is firm. The color is red where sun-exposed, but looking at the green on the shaded part tells you if they are ready. When the green lightens up to have some hues of yellow and orange they can be eaten and are very good. This was originally a commercial cultivar so I suspect the colors I am seeing here are different from locales from they are grown commercially. They don’t look very orange. They also are ripening at varying times. To me Nicole is a perfect So Cal backyard apricot, at least inland where I am. Someone should try them coastal and see what happens (use Blenheim as a pollinizer)

We are eating Eva’s Pride in both Encinitas and San Marcos, and my Arctic Stars are still hanging, but softening up. I think they will be ready by the end of the upcoming heat wave. No water to sweeten them up!

Spicezee are sizing up as well as Mid-Pride and pluots.

I have been eating boysenberries and PAF for 3 weeks or so. Very good IMO. 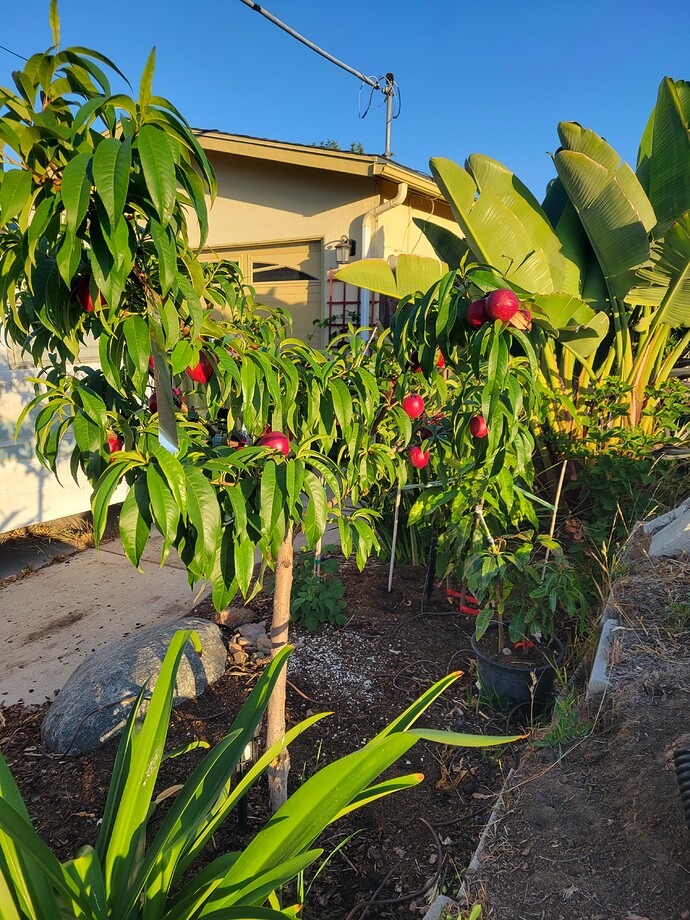 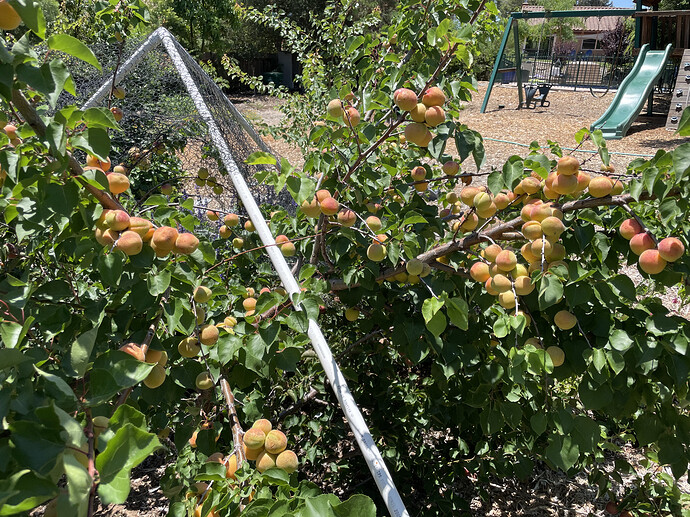 Taste - definitely as good as Blenheim. Like Blenheim, in my opinion at their best picked a few days early, before they are soft, as I like acidity. Great balance when picked at this time.
Flesh - seemed harder at first but they completely soften up when tree-ripened
Harvest timing - around the same time as Blenheim
Chill hours/productivity - abundantly productive So Cal inland, even fruiting on small grafts or immature trees
Flaws - reputation for cat scratch marks. I have that. It is small and does not matter.

Tropic Snow peach. Mine ripened over a full month. Some were watery and bland, some were abundantly sweet, even intense, with balanced acidity. Is inconsistency a feature with Tropic Snow? Or do I just have a young tree and the effects of a (previously) cooler spring? 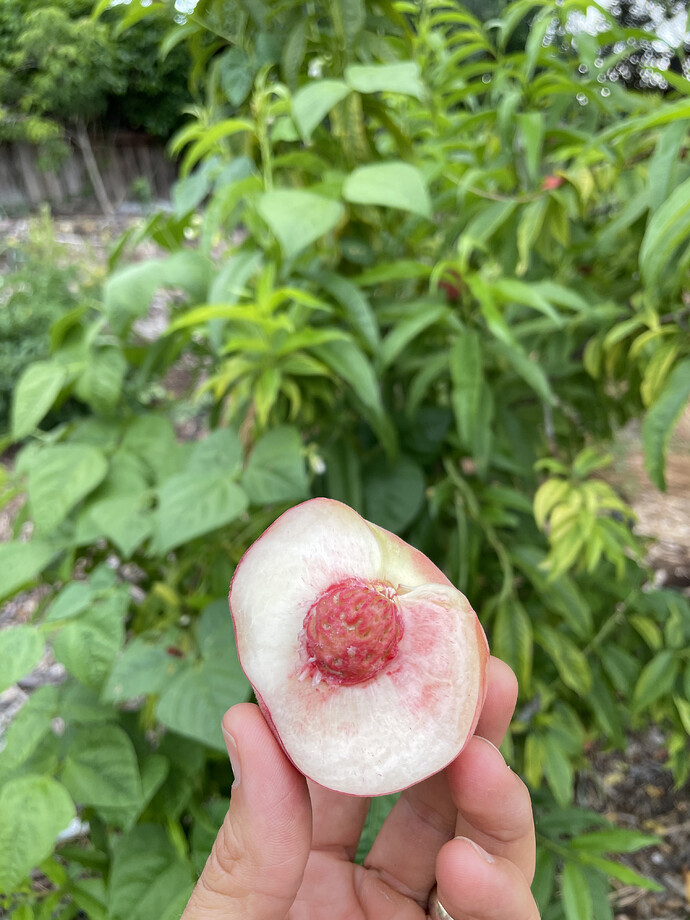 @JamesN I ate one VERY large tropic snow last week. It is a new tree but it was way more acidic than I thought it would be. There was sugar there, but not what I was expecting when I took my first bite.

Getting ready to eat mid-Pride and SpiceeZee’s are still rock hard but large, about the size of a baseball.

Hope everyone is well.

redsweet apricots ripe. Paradoxically fools the birds because they have been red and rock hard for a month, so they gave up even trying. Pristine crop

Hemskirke apricot had a crop of 12 on a medium sized tree. Very good despite my overwatering. Earlier than alameda hemskirke for some reason. Definitely not low chill but was a fun experiment. 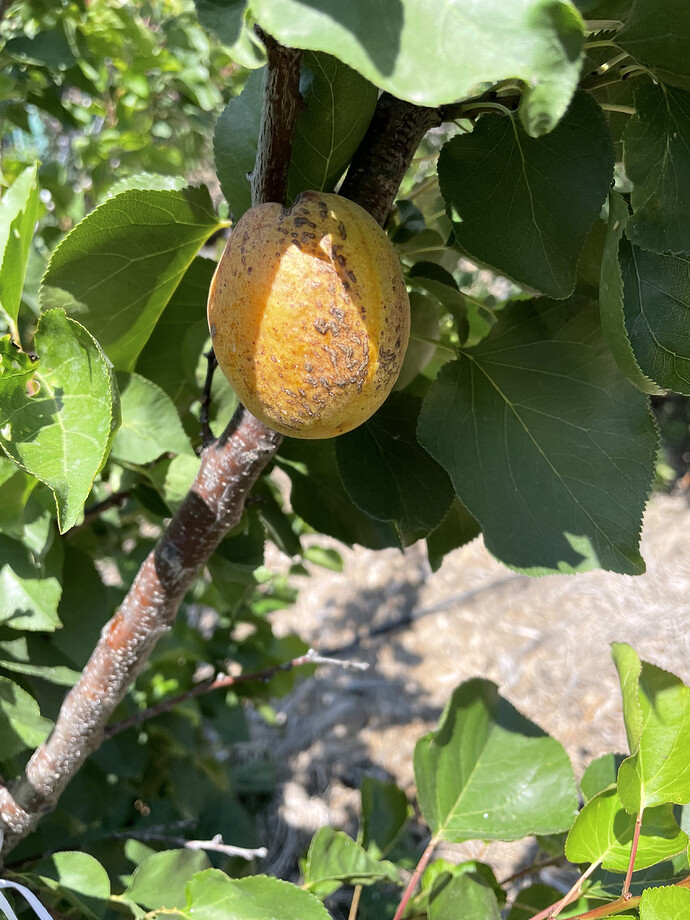 Here is Alameda Hemskirke on a medium sized branch (3 year old graft). My impression is that it was more like Moorpark than Blenheim but not as good as Moorpark. Also, to avoid confusion, this is not a low chill cultivar. I just was doing that for fun. But I do get a few fruit on my high chill cultivars in inland San Diego. 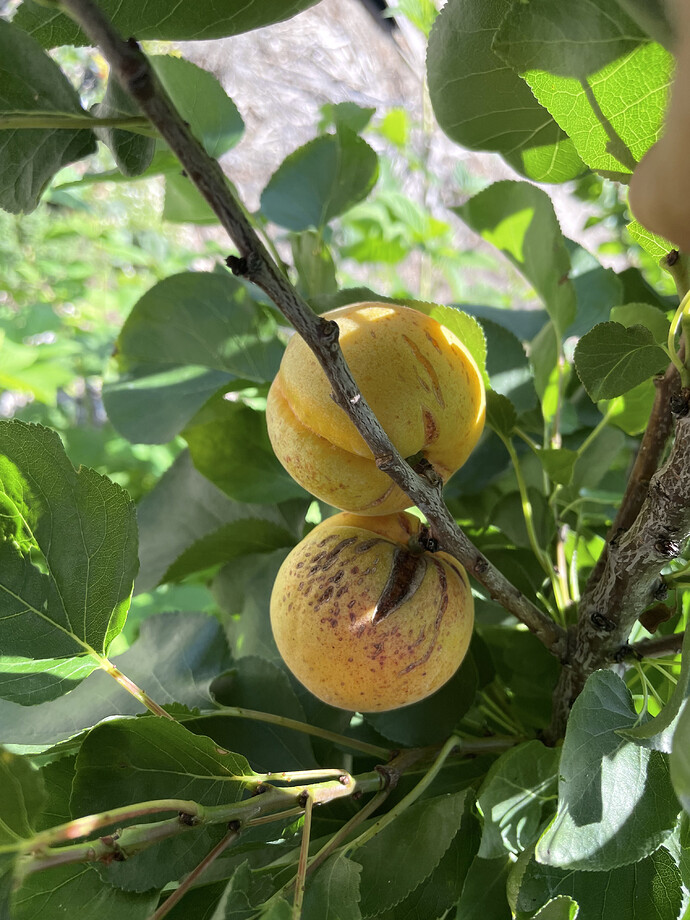 This is Steindorf Blenheim. I got amazing fruit set its second year on the ground so I was hopeful about this cultivar. But since then it has been like Moorpark, giving a dozen or so fruit a year. It does taste a bit better than Blenheim and does taste a bit more like Moorpark. I heard Andy Mariani describe its flavor a similar way. Maybe that is just from ripening a bit later. 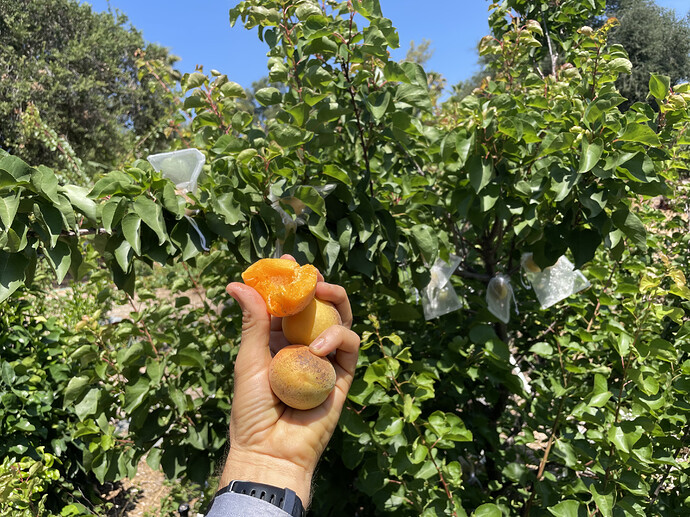 Here is Moorpark. I have been eating 5 fruit a day. This year the flavor is the best ever, despite my overwatering (which did negatively impact the other apricots). To be clear, this is not a low chill cultivar, and I don’t get enough fruit each year to make more than a single cobbler off of 2 full trees. I did this experiment for fun and then I was going to graft to something else. I already had the grafts on there but today I hacked them back. After 3 years in a row of getting a satisfying number of fruit, I am keeping both trees. For some reason the tree in eastern (morning shade) is less productive than the one in morning sun. If anyone in So Cal wants a flowering apricot for beauty alone, Moorpark is a good choice! And then take your 12-24 fruit a year as a bonus! 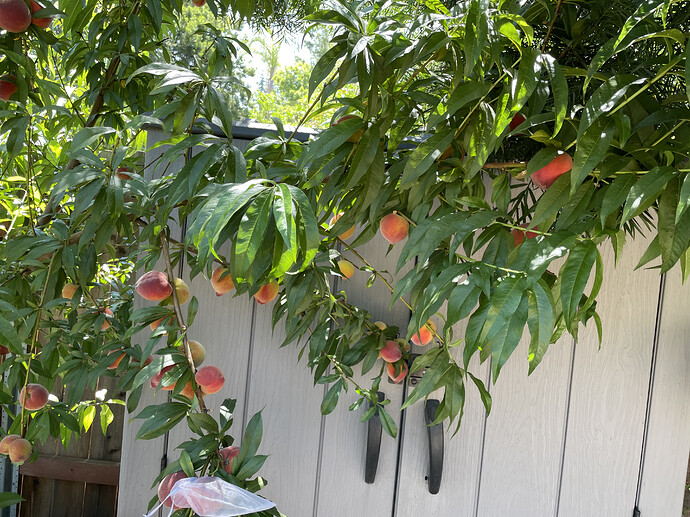 Here is the June Pride peach. People rave about the flavor but call it high chill. I tried it anyway here in So Cal. Andy Mariani said to be careful how you prune it or you might prune away all your fruit. I did not prune at all and it ended up okay. These fruit need another week or so.

Permaculture did not work. I still got bad oriental fruit moth. That demoralized my mid to late season peach enthusiasm.

New well, new plantings = I overwatered. This diluted out the flavor and ended up also reducing the fun.

Rats ate a ton of the fruit, alas. So I had triple troubles.

Summer Delight aprium - one fruit on a new tree at the end of July. Tasted decent, hard to conclude too much. Glad to have a late season aprium.

English Morello cherry - had some of these all throughout July. They were fun but never truly sweetened up, even when I left them on a ridiculously long time. That being said I really enjoyed them.

June - Flordaprince was not good this year. Tropic Snow was sometimes very good and sometimes bland. It was hard to tell what caused the variation. Eva’s Pride was amazingly good on a light crop on a new planting. Desert Dawn was very good but later than I expected.

July - Midpride and Snow Queen were the best. I overwatered Spice Zee but normally it is amazing. Artic Glo was good but the crop was light on a young tree. Double Delight was good but I did not thin it enough. Saturn was surprisingly good. Unless I got a mislabeled graft, it is actually not a donut shaped peach?

August - August Pride and Red Baron were good but I should have done better against the OFM and rats. Crimson Belle was good and was later in the month. Cal Red had a single fruit on a tiny graft and seems like it might fruit okay here. Oldmixon fruited again

Saturn was surprisingly good. Unless I got a mislabeled graft, it is actually not a donut shaped peach?

There are two “Saturns”, one is a doughnut, one is a normal peach. Of course none of that means you didn’t get a mislabeled scion either…

@jamesN told you Eva’s is a solid fruit

Let me know how Oktoberfest is.

Hi Sean, I have not had the luck I had hoped for with late peaches.
Oktoberfest - 100% oriental fruit moth. The flavor on the bits I can taste is mediocre. Maybe if I get that under control it will be better. But @RichSV said he did not like the flavor much last year either. That being said it is definitely low chill despite late harvest. Abundant harvest. I had to thin dramatically.
Indian Free - actually set some fruit, but most of it dropped before it ripened, some of it had OFM. My father in the Bay Area had the same issue there (different trees and even different nurseries) and it is known to fruit in the Bay Area so maybe it will do better next year.
Fairtime - the graft I have is on a sick tree so hard to conclude. Small fruits right now, not ripe yet.

Flavor Punch fruited a bit for me a bit it’s second year in ground. These were way better than I expected. Very sweet, they did have some balanced acidity. The pollination could be a bit of a challenge since they bloom late but elephant heart and flavor king overlapped with it. We will continue to learn about its chill hours but so far so good actually. 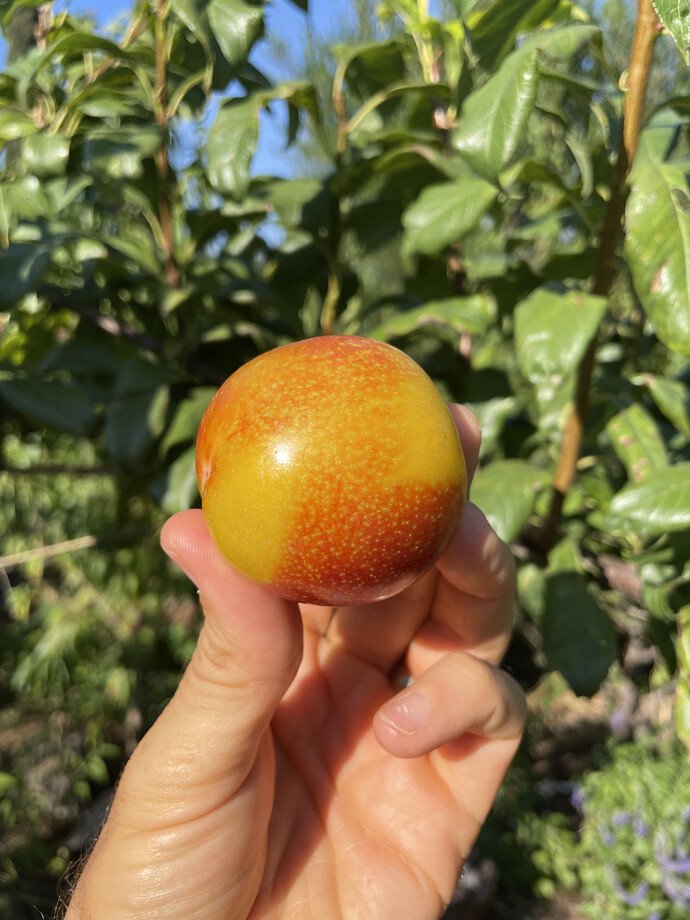 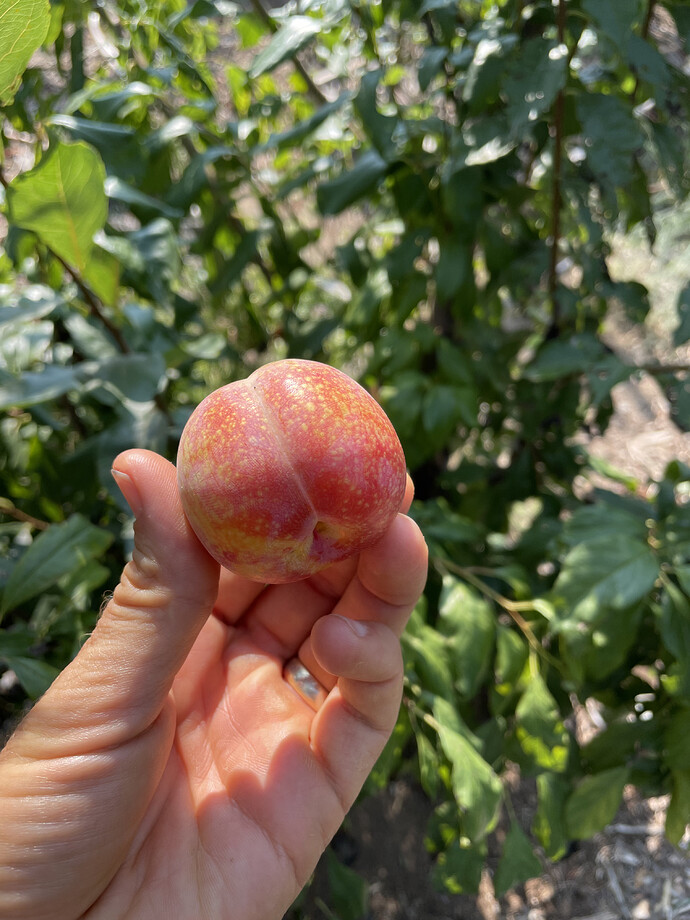 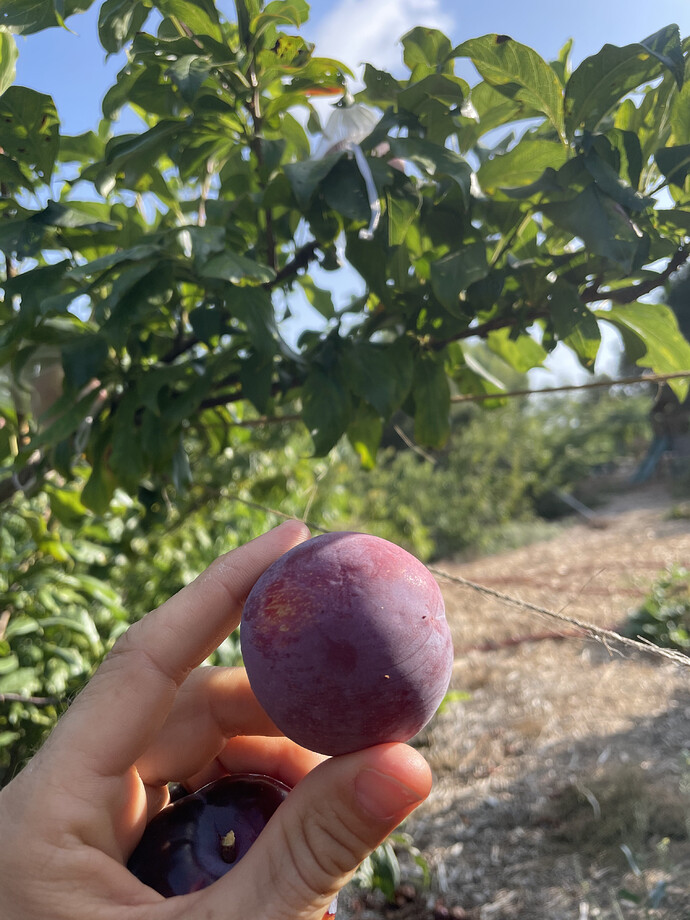 This was another photo of flavor punch. This one was a bit darker.