So,what about yellow jackets, paper wasps , Hornets, are they keepers?

I noticed something keep damaging my grapes .I think these guys did. 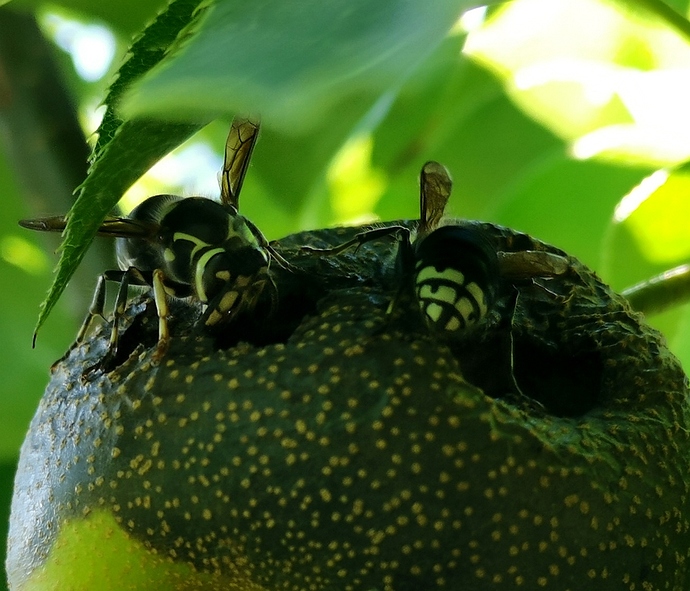 They look like yellow jackets to me. Last yea4, they damaged several jujubes because I could not bag the fruit.

Their body are not yellow. This picture looks clear 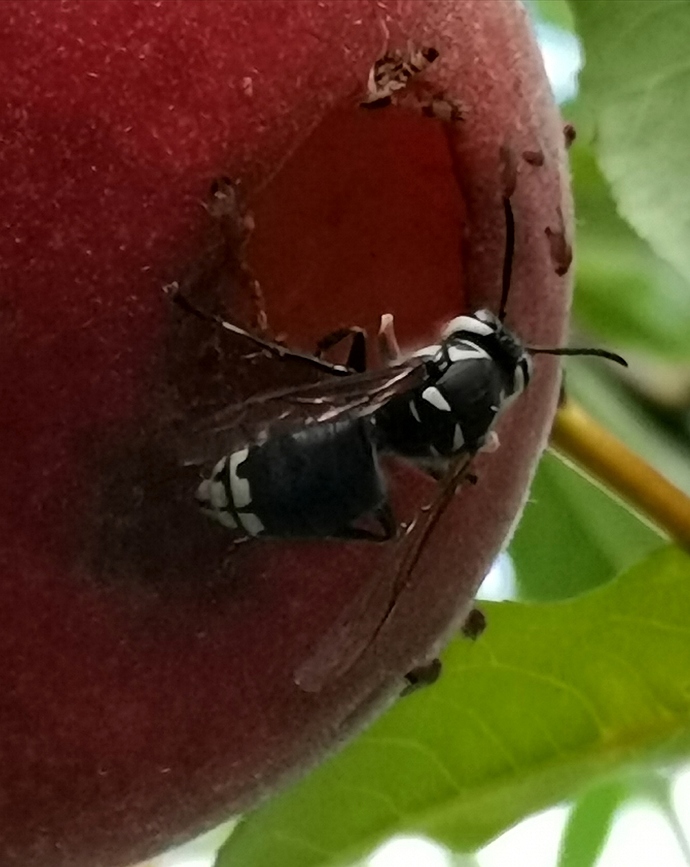 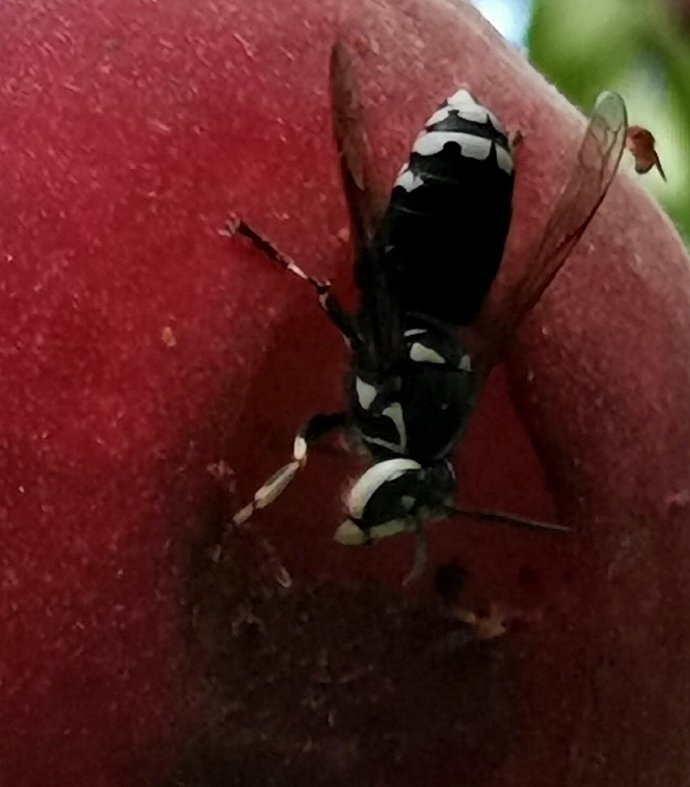 The insect in the last pic is not the same as the ones in your 2nd pic
(with a nest) in your first post.

Black with white markings is a bald faced hornet. Even with the name, it is not really a hornet, but a member of the yellow jacket family. Bald faced hornets eat flies by preference as they are usually carnivores. They will sometimes suck juice from fruit that is already damaged. I usually give them a pass as they help more than they damage.

Paper wasps by and large are beneficial. They are primarily carnivores eating numerous fly, spider, and beetle species. I usually leave them alone, especially the red wasp family because they are helpful in the garden.

Yellow Jackets I have no mercy for. They are invasive, eat honeybees (I’m a beekeeper), collect syrup from soda cans, and heavily damage fruits such as muscadines. Kill! Kill!

Thank you for identifying the bald faced hornet and descriptions of its habits. I may put them under further observations. Are the ones with nest in the picture yellow jackets or paper wasps?

@Fusion_power my experience is exactly the same. They all get a pass except yellow jackets. Yellow jackets must be hunted with extreme prejudice!

I would like to second everything fusion said and add that paper wasps are amazing and do not go after you the way that a yellow jacket will and the stings just are not comparable as yellow jackets are really super mean and make me feel like i’m having heart palpitations. Supposedly wasps probably account for killing more than 50% of our fruit pest insects per year and definitely are hard at work in our gardens.

Luckily i do not have bald faced hornets and i hear you do not want to find there home.

I had a bald faced hornet nest too close to my house last year. While dispatching it, I got stung and it was a killer! Very territorial and the sting is brutal.

If you find the nest close to your house, I’d get rid of it, especially if there are small children around.

Look up Guinea Wasp to match one of your pictures.

I had some bee equipment stored on my porch last year and needed to move it. There was a red wasp nest in one of the boxes. Instead of destroying it, I carefully detached the nest and tied it to a nail at the side of the porch where I would not disturb it. Within 5 minutes, the wasps had found the nest which was about 3 feet away from the previous location. They settled in and finished up the year happily killing and eating pests from the area. I could walk by within 2 feet of them and they would just look at me. They were the most chill wasps I’ve ever seen. If I had children at home, I would have had to destroy them.

I agree that destroying a hornet nest is appropriate if it is likely to result in kids being stung.

bald faced hornets are extremely aggressive and will chase you a long distance if you come too close! if i see a nest and its at least 50 yds.away , ill leave it alone. any closer and it has to go. it doesn’t take much to piss them off. worse than yellow jackets in that aspect and their sting is the worst I’ve encountered.

I’ll leave a “wasp” nest (open-faced) alone, unless I or others will likely be in it’s danger zone. Reach your hand under one and that “electric” sting will certainly get your attention.

Yellowjackets and Hornets though are just evil, we go to great lengths to eradicate them. As a result I haven’t seen a YJ worker in over a month. From mid spring to early summer I have a small pump sprayer handy while in the yard or while walking/working in the orchard. Once attuned to the sound or sight of a YJ queen foraging they’re fairly easy to recognize, and not too difficult to kill. Concentrated stream of water to knock them out of the air and then a boot heel. We’ve kind of made a competition of it… Between my wife and I we documented 63 confirmed kills this year. That’s 62 YJ and 1 BF Hornet queen that won’t be establishing a nest.

That may seem extreme but “find” 7 in-ground YJ nests in one year like we did, then get back with me…

PS. Water and a tiny amount of Fipronil in a sprayer with tip on long distance stream and an established nest of either variety is toast. Safely…

I have all sorts of bees, wasps, or hornets in my yard. I do intentionally leave some wild plants to bloom to attract bees. Of course, I have fruits, good ones and rot ones in compost that attracted yellow jackets,wasps or hornets Unintentionally. When I took picture, I was about a foot from them and phone/camera even closer. The bald faced hornet seem OK with me around. The paper wasps nest is right next to my backyard door. They are in and out doing their things never bothered me. I have never been stun by bees/wasps/hornets. But I did saw the bald faced hornets are/were eating fruits, not sure the fruit had been damaged already by someone else or they initiated the damage . My guess is that they initiated the damage and continued . I also saw in previous years that either yellow jackets or paper wasps did a lot of damage on my pears and grapes (I couldn’t tell them apart at that time. Now I learned that the paper wasps have yellow antenna).
I Wikied that yellow jackets prefer meat and paper wasps prefer fruits. Well, I have seen both meat eaters and veggies eaters here. For some reasons , the bait in yellow jackets traps I brought seem mostly fruity sugar water, which will attract both yellow jackets and paper wasps.

My grapes are in the mid of veraison. I will have to net them soon to prevent birds damage. But the wasps and yellowjackets can get inside the net. If they both are going to eat my grapes, I will have to destroy the nest and kill them. If only the yellow jackets eat my grapes them I will find way to trap yellowjackets only . From what I read discussion above, I couldn’t conclude , or exclude who is doing what. It is to me that they are all possible doing some damage to the fruits and helps eating some insects at the same time. 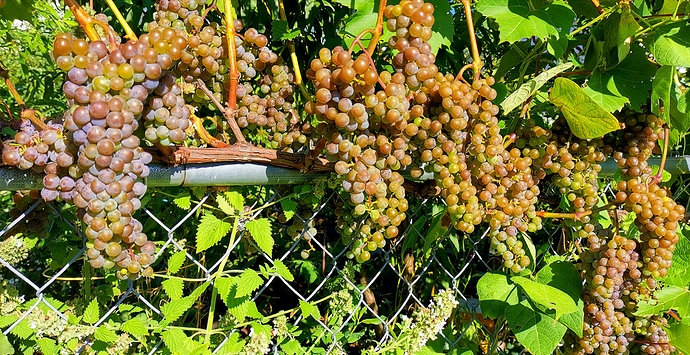 I have to agree with everyone else. Yellow jackets bad. Every year I get to find out where they moved in at by getting stung. If you have kids you for sure do not want them around. They are super aggressive. They also bite and sting.

Annie,
I found this article helpful as it has clear pics to show differences.
Now I have a better understanding of yellow jackets and paper wasps. Thank you for bringing this up.

BTW, I have no interest in examining these flying insects up close to differentiate them!!

Since a yellowjacket nest can house ~5000 (biting/stinging/SOB) workers… And since the queen can lay ~25000 eggs… I prefer to dispatch the queen before she has the chance. I do so the old-fashioned way, but will continue to try and dial-in the right formula from a bait/poison perspective. Haven’t had a lot of luck with that yet but will work out the kinks sooner or later.

Good whitepaper on baiting/killing them: