Some apples I harvested today- 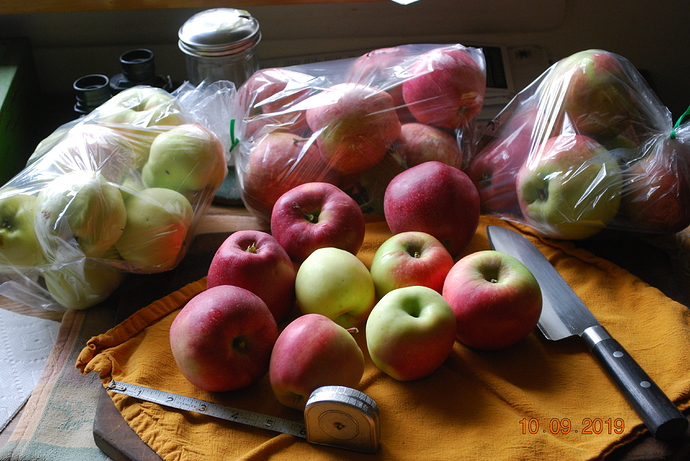 There are four Karmijn de Sonnaville and five Rubinette- the Rubinette needed more time to color up.

I got lots of Karmijn. I’m guessing that all told I harvested well over 200 pounds of apples this year, maybe as much as 250? I dunno. Gave away at least 50 pounds and still have loads. I’ll be taking two boxes to the food bank today or tomorrow. Could have used a longer season but I’m really happy to have so many without codling moth stings!

Should be enough to get us through the winter- especially if you count everything in the downstairs refrigerator: 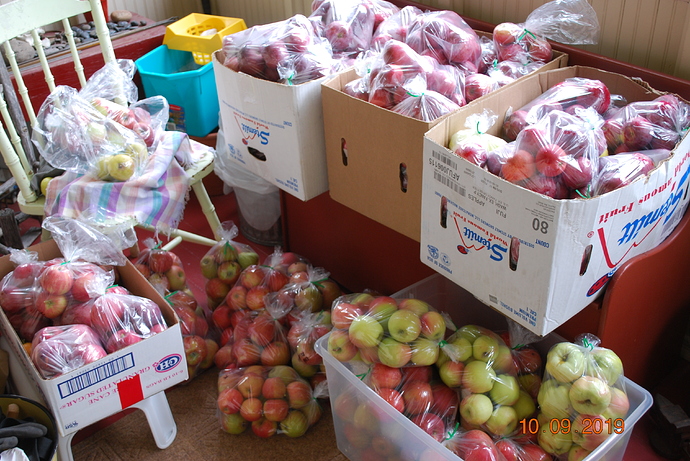 Karmijn makes an excellent pies, holding their shape and flavor after cooking. If they are too spritely right after picking, store them for 2-4 weeks and they will calm down. Great haul Mark!

I hear you may have more snow coming again. I hope you and everyone else in chill’s way fare well.

nice haul Mark! glad you didn’t lose them to the cold.

Mark that is just fabulous and they look beautiful too. Please make a tarte tatin for us with your
Calvilles, please, pretty please!!!

I am jealous of your Karmijn haul.

I love them but my spring was not conducive to polination.

Absolutely stunning harvest. I would have though W. Montana is too cold to grow such gorgeous apples. How do you keep the codling moths at bay?

Actually, W. Montana can be reasonably moderate (though it depends!) and there has been a thriving apple industry since the early 20th century. MacIntosh is probably the primary orchard apple around here, but there are some other varieties available too. There’s even a little peach business, and a good-sized melon farm that do well too.

Codling moth are a big problem for me! This year I used Triazicide for my first three sprays, and then spinosad for the last three, spraying at 10 or 15 day intervals. I also used a heavy dormant oil at early bud break. This was my best year ever, and I had almost zero bug damage. A few bird pecks, a squirrel theft or three, and some modest late hail damage.

That yield was all from one tree and was mostly Liberty.

Edit: I actually did two dormant oil sprays, including one in the fall. And I should have said that in Eastern Montana (which I call Western North Dakota) it’s a zone or two colder and very windy, and to my knowledge there’s no significant fruit business there. Lots of grain, though.

Lots of grain, though.

Yep, grain, oil, and cattle. I always thought it should have been West and East Dakota not north and south. I’m sure ND would gladly adsorb eastern Montana!
Nice haul.

Western Montana? Are you near Hamilton or farther north by Flathead lake? It has been 30 years since I was out that way. Was I ever surprised to see all the fruit trees planted on the East side of Flathead lake (peaches and cherries if I remember correctly). Mighty big lake so I suppose the lake keeps it slightly warmer there. I absolutely fell in love with the area between the bitterroot and sapphire mountain ranges.
The trout I caught by Kalispell on the flathead river were mighty nice too! No luck when I fished the swan river. And all those delicious huckleberries! Sorry but I am feeling a bit envious. I was out there on a business trip and had such a good 2 weeks that it felt like a vacation.

We’re smack in the middle of Missoula- Hamilton (Hamil’on or Hammertown to the locals) is 45 minutes south, and I guess the lake is a little over an hour north. And you’re right- the lake’s a substantial buffer for the cherry orchards there. Peaches not so much, but there are a couple of orchards.

We hunt in the Bitterroots and Pintlars now, if you can call going for long walks in the woods with our rifles hunting, and I’ll admit I’ve never felt the need to apologize for the fishing around here either- thanks for all the kind words about my favorite part of the world!

Amazing Mark. Glad to hear you are giving back to the community, too. You inspire me!