I find a lot of people mistake these two flavors, especially in wine and beer. Plant descriptions often say that fruit like elderberry and aronia are tart and need sweetening. But when I have tasted elderberries, they have been slightly astringent, but not acidic. This makes me wonder about other fruits described thus.
What fruits that “need sweetening” do you find sour and which are astringent?
Which do you find easier to make tasty?
Thanks!

I’d say there is also a distinction between astringent and bitter.

Astringent is a mouth-drying type feeling. I think that is what aronia has in spades. I also think astringent with unripe persimmons. Our wild plums also can have sour, astringent or sour and astringent skin.

Iso-alpha acids in beer are more strictly bitter to my taste. I cannot think of a beer that I thought was astringent, but I’m not a huge mega-hop fan. I like IPAs, but don’t seek out the super-hopped beers.

I guess I haven’t worked with cooking/preparing enough astringent fruit to say for sure. But it is seems easier to balance our sour with sugar than astringent.

Absolutely. I also want to add that bitter is so under appreciated as a key component of flavor. Celery, Caraway, cilantro, most herbs for that matter are bitter. Better knowledge of how to utilize bitter is what sets a good cook apart from a great cook.

Astringent is a mouth-drying type feeling. I think that is what aronia has in spades. I also think astringent with unripe persimmons. Our wild plums also can have sour, astringent or sour and astringent skin.

Yes. You are describing tannins.

I find a lot of people mistake these two flavors,

I myself find that odd, as I love tart fruit, but hate astringent anything.
My Euro elderberries do not taste astringent to me. Bland if anything. Much better cooked. They have too much cyanide uncooked anyway,

Choke cherries are astringent. I kind of like the taste straight off the bush, the astringency is a key component that makes them tasty. But extract the juice, add some sugar and pectin, and they make fantastic jelly with no hint of astringency remaining. I don’t know it if the astringency is destroyed by cooking, or somehow masked by the sugar.

Just wanted to throw in a few definitions: astringent isn’t a flavor. It’s a bodily reaction to chemicals. If your tissues constrict in response, it’s astringent. Bitter and sour are flavors.

To me there is a difference. I like tart but i don’t like astringent. I can eat montmorency cherrys all day. They are enjoyably tart. I bit into an unripe persimmon once and it ruined my entire day

Or at least an hour of my day.

I think it’s weird too, but I’ve encountered it many times. For instance, I tell someone that I don’t like Guinness beer because of its sourness, and they answer, “It is pretty hoppy.” First, no, it’s not a hoppy beer! And second, I said sour, not bitter! This has happened over and over!
Same thing with cranberries. They are both sour and astringent, but the astringency seems to be what people don’t like, but only describe as, “it’s so sour.”
So are black currants sour, bitter, or astringent? Highbush cranberry? Service berry? Others?

My interpretation and not necessarily correct.

-Chickasaw plum and crabapples start out bitter but as they approach ripening they become sour at different levels.

-Unripe American persimmons is in a class by itself and I don’t know a good description other than if you bite into one you will remember the taste for a lifetime (just ask me). It is hard to reconcile that it ends up being so sweet at the end. Guessing that the taste has evolved so the fruit/seed can mature to carry on it’s gene pool.

-Acorns has what I consider astringent. Yes I have tasted one.

tell someone that I don’t like Guinness beer because of its sourness, and they answer, “It is pretty hoppy.” First, no, it’s not a hoppy beer!

LOL! Well Again I like sour, I don’t usually drink beer, but if I do it’s Guinness. And yeah hoppy beer to me tastes bad, I don’t like wheat either. I don’t like anything wheat, bread, whatever.

So are black currants sour, bitter, or astringent?

I have not tasted enough to tell yet, plus they seem to vary a lot by cultivar. They do have a musky taste to various degrees. and also an aromatic quality. Like Juniper berries, or Magnolia vine berries. They taste nothing like them, but have a strong flavor that penetrates like menthol, or mint, wintergreen. I describe that as aromatic. [quote=“Auburn, post:10, topic:11563”]
-Acorns has what I consider astringent. Yes I have tasted one.
[/quote]

Not all, red oaks yes, white oaks are bland, no flavor, rather dull, great for making flour. Zero astringency. The native Americans have a process to remove astringency in the reds. Some form of blanching if I remember correctly?

Your right and I should have differentiated between the two. Thanks

I’m like you when it comes to Guinness, I have never liked it, and I like all kinds of beer. To me it’s not that it’s bitter, or sour, it just has a “burnt” flavor, which I find almost unpalatable. I think they toast the barley to get that unique flavor. They also make Harp lager, which I really like.

I don’t see why it’s so popular, but I guess I have a different palate.

I tried blanching (if that’s the right term here) some acorns by running them thru fresh water for several cycles. It never really helped with removing enough tannins. Not tasty.

I think Native Americans processed them by putting them in some kind of cloth and placing that in a running stream, and leaving it for a while. I suppose that is what removes the tannins.

I do know that it was a chore getting the nut meat out of those shells. Not worth it in the long run. But, not as difficult as black walnuts, wow, that’s some work…

In Russian language word “astringent” can also be translated back to English as “Tying” and I think it is pretty right word to describe astringent feeling. I wouldn’t even call it “taste”, it is different feeling, more like sense of touch. Quince, persimmon, Bird Cherry (Prunus padus) are astringent. But they also sweet or sour-sweet. Oak bark tea is astringent. You can’t wash away astringent feeling from your mouth even if you rinse it several times. If you continue eating astringent food you may start choking, as you can’t actually swallow because your throat is affected too.
Black currant bitter-sour-sweet. High bush cranberry (especially European) sour-bitter, or sour-bitter-sweet. And both are not astringent.

Good description of astringent. And great comments on fruit flavor.
Acorns are definitely tannic. I process a hundred pounds or so every few years. Even white ones that don’t taste astringent at one bite will taste bad once cooked and can have enough tannic to trouble your liver. Not that most of us eat them every day.

LOL! I could get enough of the whites, at least I think it’s white? That are mellow, big too, but never did anything with them. 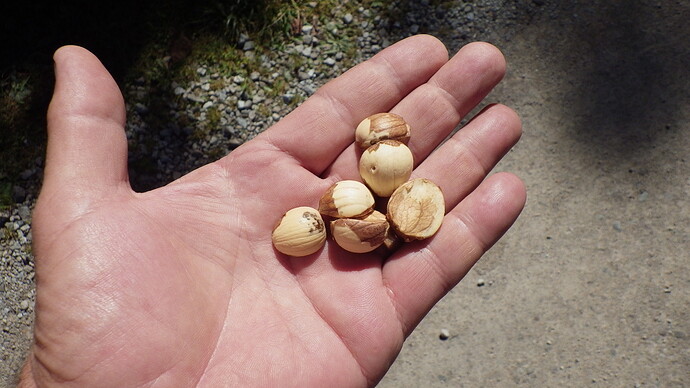 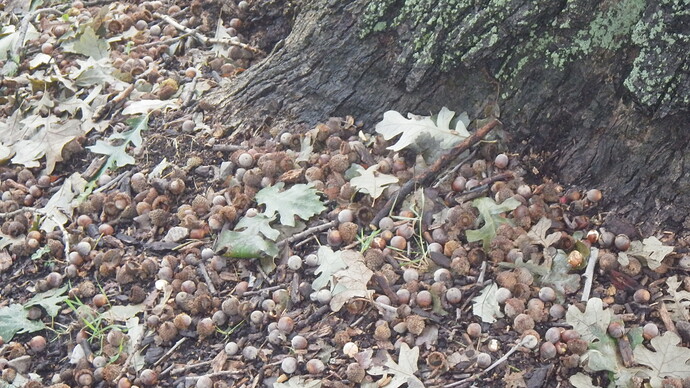 Black currant bitter-sour-sweet. High bush cranberry (especially European) sour-bitter, or sour-bitter-sweet. And both are not astringent.

Good to know! I have a highbush cranberry, not sure which type? The plant is small, was thinking of wine one day.

Just wanted to throw in a few definitions: astringent isn’t a flavor. It’s a bodily reaction to chemicals. If your tissues constrict in response, it’s astringent. Bitter and sour are flavors.

I think of tart and sour as synonyms. I don’t associate astringency or bitterness with either.

Looks like a white oak type to me. Asymectrical leaf sinuses are characteristic of the white oak group.