I had planted the Warren pear in my yard, as well as a couple other cultivars that I stuck in cramped places, not really expecting much from my pears.

My Warren pear has blossomed and leafed out, well ahead of my other pears. Does anyone in southern California (or maybe comparable climates) have any other European pears that fruited for them? I heard Bartlett can actually produce in So Cal and I have one but it has not bloomed.

I would love to have something that blooms early so I can finger pollinate the Warren and see what happens. I know it is considered self-fertile, but often pollination does help. If you know it is truly not needed, let me know!

@Richard perhaps you can help him out with his pear questions. I know you like the hood pear which does very well for you there.

I have heard that southern bartlett will do good. Hood and Floridahome are low chill varieties that will fruit here too. Not sure on when they bloom though.

I’m in Orange County. I have Warren and Magness grafted on the same tree. They took 6 years to start producing for me but I’d say they’re the best pears I’ve ever had (Warren and Magness fruit seem to be very similar). Not a huge crop but worth having. Not bothered by fireblight. Seckel and Stuttgarter Geishirtle also produce good pears but light crops and seem to resist fireblight. I had no luck with these:
Bosc (no fruit)
Forelle (FB)
Spalding - very productive but fruit is not very good, also very susceptible to FB
Comice (no fruit)
Ubileen (no fruit)

I don’t care for Asian pears, they lack flavor in my opinion.

I have a second leaf fanstil pear that was in full bloom around the second week of March on the coast in Encinitas. It is now hanging 3 pears. Hoping that this timing helps you information wise.

I would like to try warren and magness grafted onto my Hood pear.

I had no other pears blooming in my yard when my Warren bloomed and it still produced fruit and so did the Magness grafted on the same tree (Magness is reported to be sterile). So it would seem Warren is self-fertile and that’s also what the nurseries tell you (Pears , Warren Pear - Edible Landscaping). It probably helped pollinate the Magness. 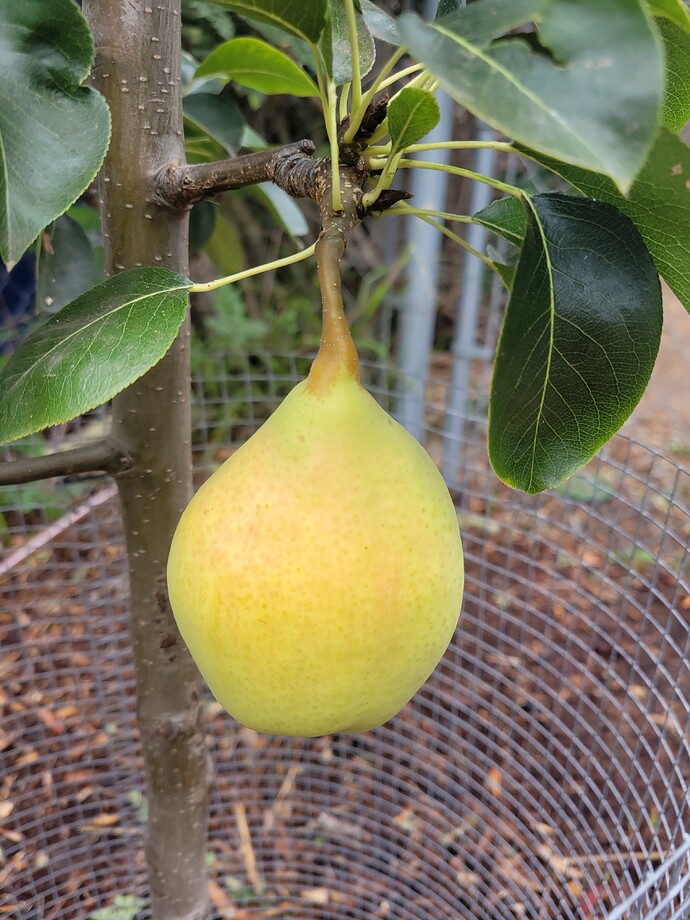 My neighborhood has a lot of ornamental pear trees, so I have to be mindful of fireblight resistant varieties. I planted harrow delight and Korean giant (Olympic) trees in an area that gets a few hours of morning shade about 3 years ago. They’re both on ohxf 87 rootstocks. After 3 years, my harrow delight made two pears for the very first time this season. Very excited. My KG bloomed but did not set fruit this year (it has never bloomed before). I’ll give KG a few more years, if it ends up being a failed experiment then I’ll graft harrow sweet on it.