Just purchased a Southern Home Grape and was wondering if anyone else has tried it and is it really that much different from the Muscadines that I once grew. Any replies are welcome even the ones that are negative. Thanks, Bill

Auburn, I’m replacing my Ison’s vine, and was considering Southern Home. Ison’s suffered severe cold injury the last two winters. I finally decided to go with Lane and Scarlett. Lane is supposed to be the newest cultivar from the Ga breeding program. Reviews seem to be good. Though, its cold hardiness is unclear. I’ve bought my vines previously from Ison’s, but getting these from Bottoms nursery.

I’m sure you’re familiar, but I always check out the UGA site and some others for reviews of various cultivars. 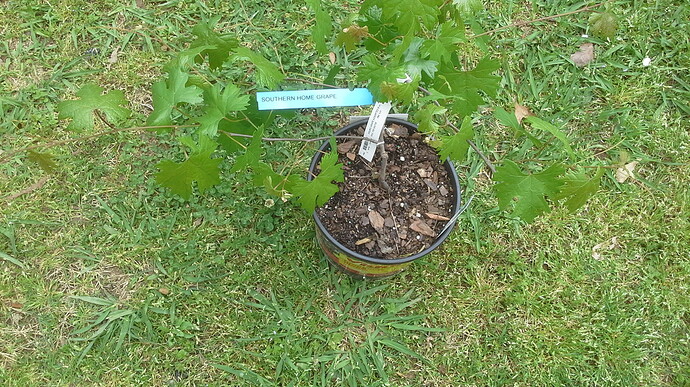 I used to correspond and trade plant materials with PNW grape guru, Lon Rombough, and asked him about it.
His opinion (everybody has one, you know), was that Southern Home was more of a ‘curiosity and ornamental’ plant than a substantial producer, said that Dunstan had better selections, and didn’t really know why they chose this one to push.
Bob Zehnder, in SC, had a number of muscadineXbunch grape crosses, some of which were probably light years ahead of Southern Home…but I have no idea what became of them after he passed on.
I’ve been tempted to try SH just for grins, but would also like to try pushing the envelope and plant some of the most cold-hardy muscadine cultivars…but I don’t have time to fool with them right now.

Lucky. I have mixed feeling about this grape being an improvement. The fruit cluster and egg shape is what attracted be to it. Thanks, Bill

I’m growing it here in Vista CA because

Now that last bullet might be a negative for many of you, but it’s very important here given our cooler summers and intense disease pressure from a variety of mildew species.

We have Summer Home growing here in Phoenix. Third year in the ground and its set some nice clusters for the first time. Its quite a vigorous vine.

Hi Richard. Is your description for the Southern Home or another grape. Seedless would be a huge deal to me. Thanks, Bill

Sorry Bill, it is not seedless as previously stated (chagrin). For that I’m growing Black Manukka.

Thanks Richard. It got me to looking and Gurneys has a seedless muscadine called RazzMatazz. I use to grow muscadines and my only fault with them was the seeds. Bill