Does anyone grown spirulina at home?

I have considered it a few times, and have found a place where I can buy very expensive starter culture, but I have so many questions. The cost of the starter culture in my country makes trial and error a bad option, I would much prefer to learn from the mistakes and success of others.

I’d never heard of it before and so I’m sharing this info for others: 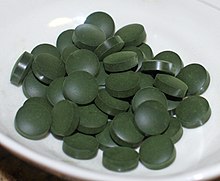 Spirulina is a biomass of cyanobacteria (blue-green algae) that can be consumed by humans and animals. The three species are Arthrospira platensis, A. fusiformis, and A. maxima. Cultivated worldwide, Arthrospira is used as a dietary supplement or whole food. It is also used as a feed supplement in the aquaculture, aquarium, and poultry industries. The species A. maxima and A. platensis were once classified in the genus Spirulina. The common name, spirulina, refers to the dried biomass of A. pl...

A concern I would have growing cyanobacteria would be that if your culture got contaminated with a strain that produces any of a number of cyanobacterial toxins, you could poison yourself. The list of toxins is long - but one has the name of “very fast death factor” (aka anatoxin). Cyanotoxin - Wikipedia

Cyanobacteria are ubiquitous, so you’d have to be careful as a microbiologist to avoid contamination, I think.

What is the benefit of consuming cyanobacteria?

Spirulina is high in protein and various vitamins and minerals so the dried form is sold as a supplement in health food shops. There are a lot of alleged health benefits, I am not sure if any have actually been proven.

Cabbage and chicken are less expensive.

Except for the so-called “sudden death” side effect are there any minuses?

Sudden death, debilitating illness, and nasty headaches are the only minuses I know.

An interesting spiral used once to grow spirulina.
Found it on google earth , just had to know more… 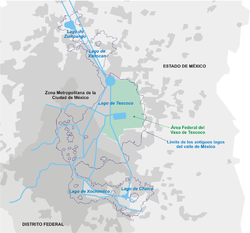 The Deposito de Evaporación Solar "El Caracol" (also known as El Caracol de Texcoco or "El Caracol de la Ciudad de México) is a large spiral-shaped retention basin located over the former lakebed of Lake Texcoco, northeast of Mexico City, in the municipio of Ecatepec de Morelos, Mexico. Built in 1944 by the SOSA Texcoco corporation, the basin is called el caracol (the snail) due to the short, spiral-shaped concrete levee that circles it. Approximately 3,200 m in diameter, the levee was part of t...

From what I have read the pH that spirulina grows in is too high for other cyanobacteria to survive, they say not to harvest unless the pH has been at 10.5 or above for a few days.

Most people also recommend not harvesting unless the density of spirulina in the water is above a certain point (3cm using a secchi disk) which is meant to shade out other cyanobacteria.

From what I have read, contamination with heavy metals is the biggest issue. This is most likely to occur in the commercially produced powder you can buy as opposed to home grown spirulina.

Let me stress this is only from things I have read on the internet, I have no experience myself, so I can’t attest to the veracity of such claims.

Kinda my thoughts. Sort of like buying probiotic pills so you can pay 3x the price for 1/10 the bacteria of a bottle of kefir or jar of kraut

Two years ago I had to replace my gut bacteria after it was wiped out from pneumonia medication. I followed my doctor’s recommendations:

From what I have read

I can’t figure out why you are interested in consuming Spirulina. Please explain.

My DIL carried twins to term with normal healthy birth weight taking Spirulina as her ‘prenatal’. Personally, I don’t think I would want to grow it myself. I consider it a green protein that is easy to digest. Just sayin’ 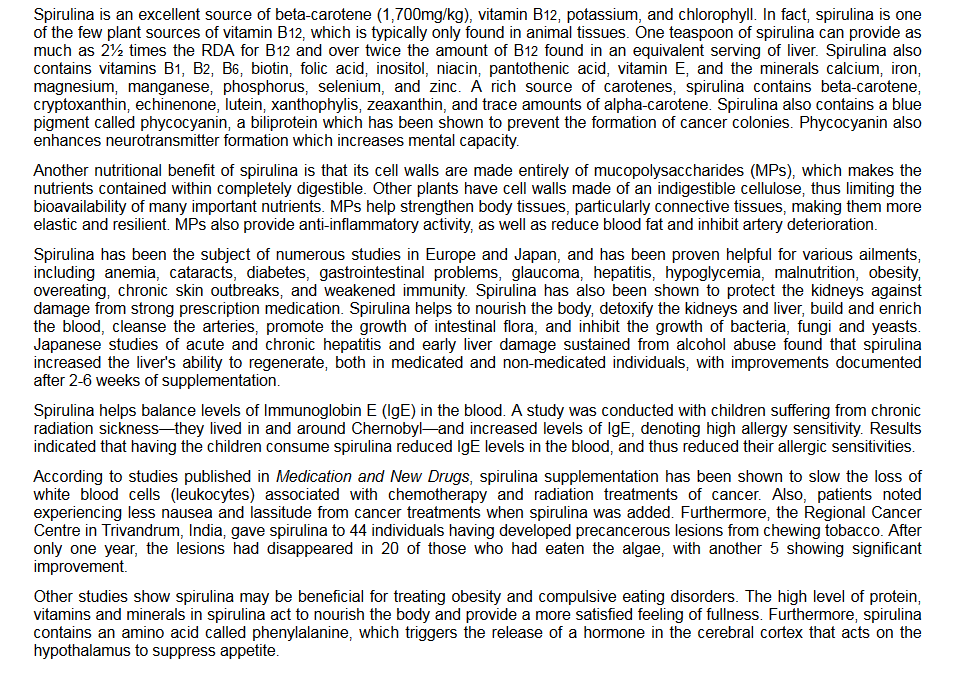 Sounds like an interesting project and I’d love to see you keep us posted if you give it a try.

While I’m not sure if it would be worth it for me to grow it for my own consumption, unless having it fresh has some large benefit, I’d love to grow it to feed to daphnia and brine shrimp I culture for my tropical fish. Doing that would just take a small tank worth.

I’ve had it in some smoothies a few times and I know it is supposed to be great nutrition, so if you could grow it in enough volume I could see it being worthwhile.

The article you posted starts out with misinformation about B12 so I can only assume that the remainder of the article lacks credibility in other areas. Here’s the truth about the B12 content of spirulina -

" Spirulina: Not a Vitamin B12 Source

For a long time, spirulina was considered a vitamin B12 source. The vitamin B12 level which it showed when tested by conventional methods has been disproven by recent testing, which proved it to simply be vitamin B12 analogs.1-3

In actual fact, the vitamin B12 content has been measured to total just 30%, a very low amount compared to the level of pseudo-vitamin B12.4,5

As expected, taking spirulina significantly worsened the B12 status of a research group in a study carried out, which found that the B12 analogs impaired the absorption rate of genuine vitamin B12.6 Vegans, vegetarians and people with vitamin B12 absorption difficulties should thus steer clear of spirulina products.

It is also not recommended to take spirulina alongside vitamin B12 supplements, as the pseudo-B12 in the spirulina can hinder absorption."

It was an old article and as many research articles is often superceded, but as the expression goes ‘Don’t throw the baby out with the bath water’ with regards to the rest of the article.
I was replying to …

I can’t figure out why you are interested in consuming Spirulina. Please explain.

But certainly one does not need to spend much time on PubMed to find why one would consume Spirulina.

My younger daughter is vegetarian and consumes fresh vegetables every day. To keep her protein levels up she adds adzuki beans, Farro seed, et al to her diet.

I am used to seeing dozens of puff pieces on spirulina with incorrect information. It has become a cottage industry. I can’t recall the last article I saw on spirulina that was 100% accurate. In fact I have probably never seen one. As for the studies, most are very limited in scope and reach conclusions which speak in terms of links, not causation. Most of these studies do not discuss side effects in any depth because they were limited studies. And most of these types of studies forget two very important things - much of the spirulina produced contains toxins of one type of another, some of which are very dangerous toxins, and even clean spirulina can cause really nasty headaches. If you can find a guaranteed clean source that will not kill you or disable you, and that does not cause you headaches, then spirulina does appear to be a source of decent nutrition, just like hundreds of other foods.

I am just really really tired of seeing the hype surrounding spirulina and also tired of seeing it pop up as an ingredient in other foods for no intelligent reason, and with no mention of its source.

Oh I totally agree. The whole world labors under the marketing of false info and fake news making us all skeptical. I also have some degree of skepticism towards what some call science having done and supervised research myself.
That said, finding a good source for anything you put in your mouth is a blessed thing, whether a food or supplement. Who would have thought that in a country of such abundance, finding good food would be an issue? Finding sources for good quality supplements can also be a challenge when a company’s marketing budget exceeds their quality control budget. But that’s the world we live in.
I take Spirulina from time to time.