My Arctic Star nectarine on Citation is a slow grower in its second year. I left too much fruit on it but that’s a different topic. It is gonna be a hot week here, 90s straight for a week. So I watered it deeply last week. Could that cause the fruit to split? 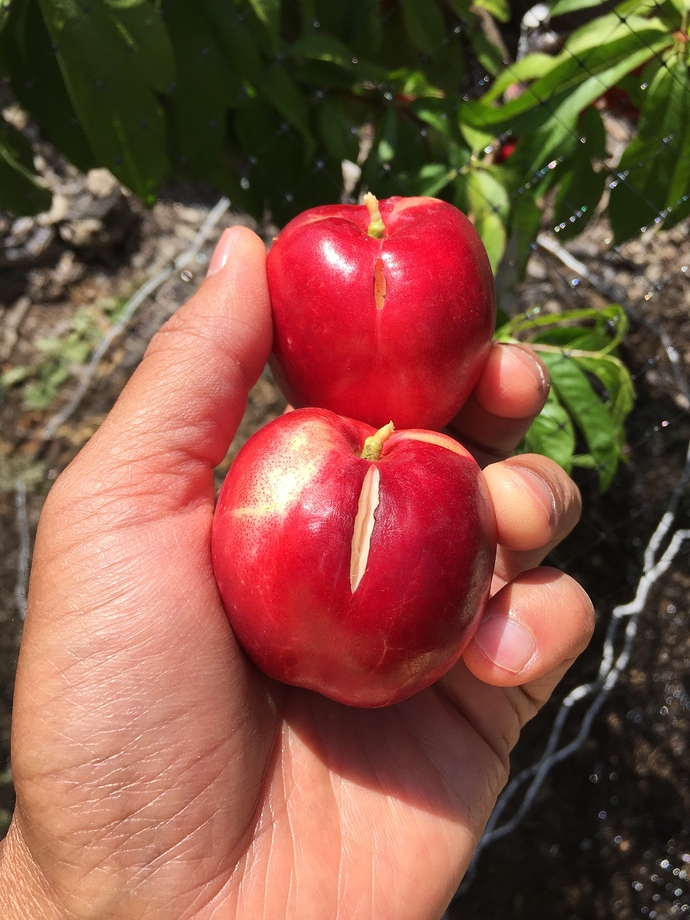 Yes, that can cause splitting esp if they were dry beforehand. Judging from how they look they probably didn’t need watering, at least not deep watering. I could be wrong about that and it would be easier to tell by looking at the tree.

As Fruitnut indicated, the splits were almost certainly caused by the deep watering. Some varieties are very prone to splitting from too much water, some never split.

As this video explains, a dry period followed by lots of water increases the pressure inside the fruit and splits it. At one time, I think I’ve read the water was thought to be absorbed through the skin to split the fruit, but that’s not true. The roots are quite capable of pumping enough water into the fruit to split it.

I don’t know if you’ve noticed, but after a heavy rain, peach sap will ooze on the tree from any fresh cut or bark damage. There’s just so much pressure in the tree, it comes out everywhere. My thought is it’s probably that same pressure which is pushing too much moisture in the peach/nect.

The uniform and light color of the fruit indicates low brix caused by too much water. Not this last watering but all spring. Excess fruit also lowers brix. Arctic Star isn’t good at low teens brix.

Do you like Arctic Star? I have one, but no fruit this year. I’ll have to watch the watering, but its tough up here because we can get a lot of rain some year. I think mine is on Lovell.

Your AS looked like mine. Small, no sugar speckling spots, and no flavor. Mine is 3rd leaf on Citation. I left too much fruit as well, and I also deep watered about a week before they were ripe. Mine did not spilt, but next year I will listen to Fruitnut and not water at all until some time in June (if we have similar amount of rain next year).

This one time was the only irrigation I gave to the fruit trees. We did have a cooler, wetter spring.

I think the fact that citation was the root stock may have added to
the problem. I have found citation to be very intolerant of over watering,
especially on nectarines.

The knock on Citation according to DWN is it won’t take under watering. I’ve cut the water awfully short and it’s held up fine. If it starts dropping older leaves it’s too dry.

Arctic Star is superb at mid 20s brix. They need to be above 20 to be good. Above 30-32 and they can develop off flavors. I had one this yr at 30.5 and it was excellent. That was on K1. Redhaven next to it was 13 and way better than Arctic Star at 13. I can’t explain the 30.5 vs 13. I haven’t been able to get peaches anywhere near as sweet as nectarines

I have found citation to be very intolerant of over watering,especially on nectarines.

In your experience what happens in that case?

The tree shuts down and oozes sap, as if it had gummosis.

My Mirabelle plums do the same thing.