Every year is something different. Last year it was yellow jackets and aphids, this year I haven’t seen them but leaf rollers and sawfly larva are our in force.

I usually just kill them manually but nowadays I have more plants in the currant family. What would be a good spot treatment for them?

ive dealt with leafrollers but what damage does sawfly do?

Gosh, you really have to see them in action. The sawfly deposits tiny white eggs along the veins of leaves on the underside. When they hatch they hatch by the hundreds. If you are not paying attention one day the leaves are fine the next half the plant is gone. On a bad year by the third they can eat every single leaf on a full grown plant.

And this year is bad. I finally got an idea how much wild currant I have in my forest (not much by the way) Usually it is hard to tell what’s currant and what’s say squashberry but this year the sawfly larva pretty much decimated all the leaves on the wild currants.

Once I was going to buy a gooseberry plant in the nursery, but was stopped by out of my range price tag, so I didn’t. Then a week later I got some gift card and decided to spend it on that gooseberry. When I got in the nursery, the bush was completely leafless. That time I didn’t know what it was, but it was obviously some bug, not disease. So I got it half price. Only next year I found that it was sawfly the hard way. The larva is so tiny and green like a leaf and it eats it along the edge. Unless you feel it with your fingers, you can’t really see them. You only see that leaves shrink by the hour. I ended up spraying with Permethrin

Usually I just kill them by hand but this year they are trying to take over the world.

well i guess i havent seen them here yet as ive never had any issues with my currants other than occasional leafrollers which i pick out by hand.

My honeyberries got hammered the last few days by the sawfly larvae. It’s a bummer because not only do they eat and destroy the blooming flowers, they also eat the fruit. Have you found a way to manage them? 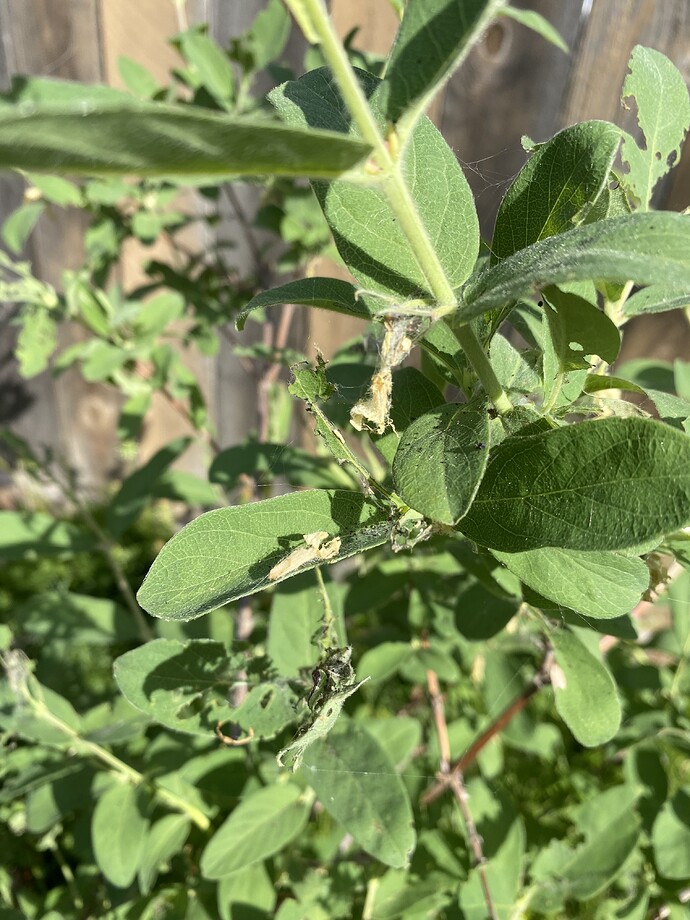 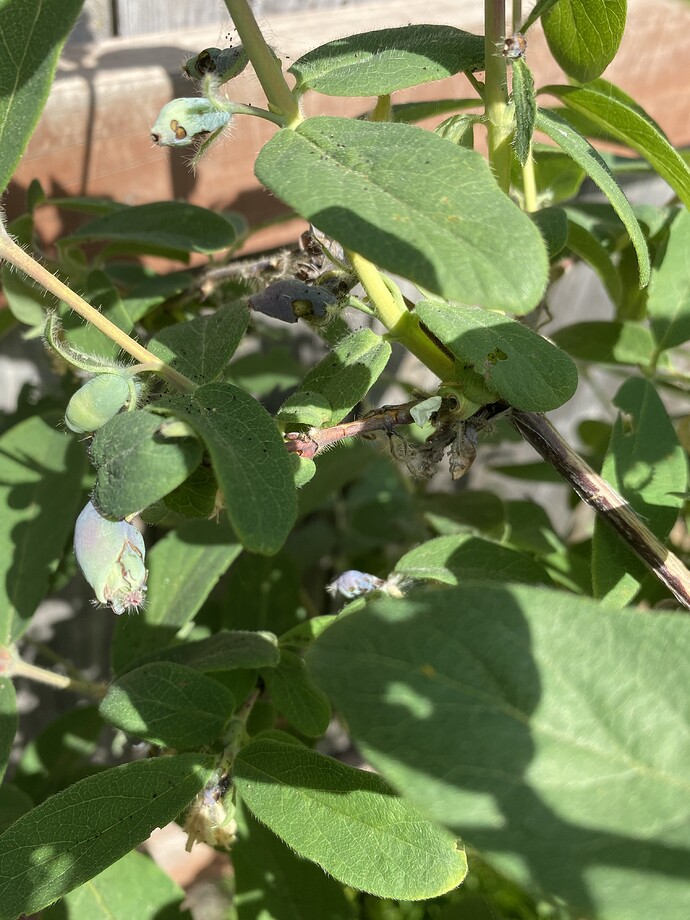 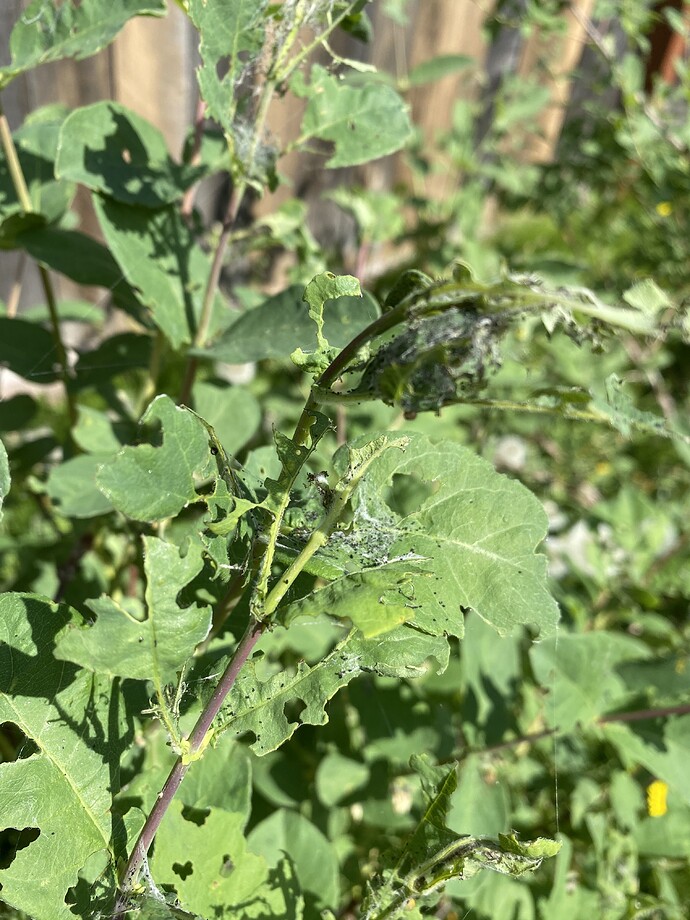 Here’s what they look like. They don’t seem to bother the raspberry, Saskatoons, cherries, or currants. Or maybe they haven’t found those other plants yet. They love honeyberry. 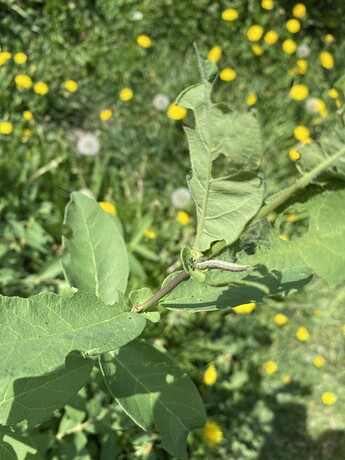 nothing touches honeyberry here other than a occasional leaf roller,so im assuming we dont have sawfly. they’re a worm so B.T should take care of them.

This is an easy one! Plant currants, they’ll destroy those instead. They just got started on mine :’(

I’ll be monitoring this thread for an answer, I have too many bushes to be doing them by hand.

Moose, when are you coming up to the valley next? You need to stop by to try my raspberry/cherry/haskap wine, it is actually pretty good.

Pyganic is the organic form of permethrin which is synthetic. Pyganic does not last as long as the permethrin so it is less lethal to the beneficial insects.
My daughter gifted me a Red Lake Currant. It was covered in Currant Sawfly larvae within a week of coming from the nursery. Yuck… those are ugly critters😖. They can defoliate a currant quickly. I remove them manually and then spray. They haven’t visited my orchard in several years.

Do you know if there is a practical difference between Pyganic and Permethrin? We have synthetized many molecules such as caffeine, which is virtually indistinguishable form “organic” caffeine. Aspirin, vitamin C, the list is looong. On the other hand some of the most toxic substances known to man are organic in nature like botulism. I’m wondering if there is a functional difference between the two.

Permethrin has a much longer duration vs Pyganic which breaks down quickly. I use permethrin in and around the barn to kill flies when they become intolerable.One spray lasts 4 weeks or more. I use Pyganic in the field and orchards when I want to control an outbreak(sawflies, potato bugs, flea beetles, etc) but I don’t want to nuke the beneficial insects.
Every situation and application is different.

I am glad you said explained that. Thank you! I seem to have a ton of beneficials right now and also a wave of currant sawfly. I have been waffling on how to deal with the ones I cannot easily reach to squish.

Ugh. I have them on my gooseberries for the first time this year. Tried picking them off by hand, but there were so many, it was hopeless. Now there’s a second wave of them and I see a dozen or more clinging to every last remaining shred of leaf. The bush is a skeleton. Yuck. They don’t seem at all interested in the currants over here.

Knock on wood My Pink Champagne Currant is apparently much more desirable to them than the many gooseberry cultivars that grow about 10 feet away. Even the PCC cutting in pots on the deck get hit with them but not the gooseberry cuttings one pot over. They never bother the Crandall Clove I grow in the front yard either. I wonder why?

the pink champagne currant!!! Is yours very big? I’m having trouble getting mine to grow. I think I need to move it.
Funny, the sawfly larvae don’t bother my black currant either. I wonder if it is the color? The cabbage moths don’t bother the purple cabbage only the green🤷🏼‍♀️

Every year they seem to pick on a different plant. Last year they defoliated my Josta to the ground (no great lost, I hate that plant) while ignoring the rest. This year they seem to be on a more equal opportunity munching bend. I have never seen them on haskaps, that’s odd.

I just ordered Permethrin, the synthetic longer lasting version of Pyganic. I have dealt with sawfly larva for years and every single one has been on plants that are no longer flowering. Like right now; there are no pollinators on any of the currant family bushes where the larva is munching away. The pollinators are currently busy on the raspberries, cherries, and chokeberries, none of which is bothered by said larva. I’m hoping I can do late evening spraying in hopes that it won’t affect the pollinators on nearby bushes.