My spray guy came out on Thursday and sprayed with captan and some sort of pyrethriod, it rained all day yesterday so I didn’t go out to check but this morning I went out and the trees look awful. Is this normal? did he kill the tree? next year I’m doing it all myself but I need to get through this. any advice? 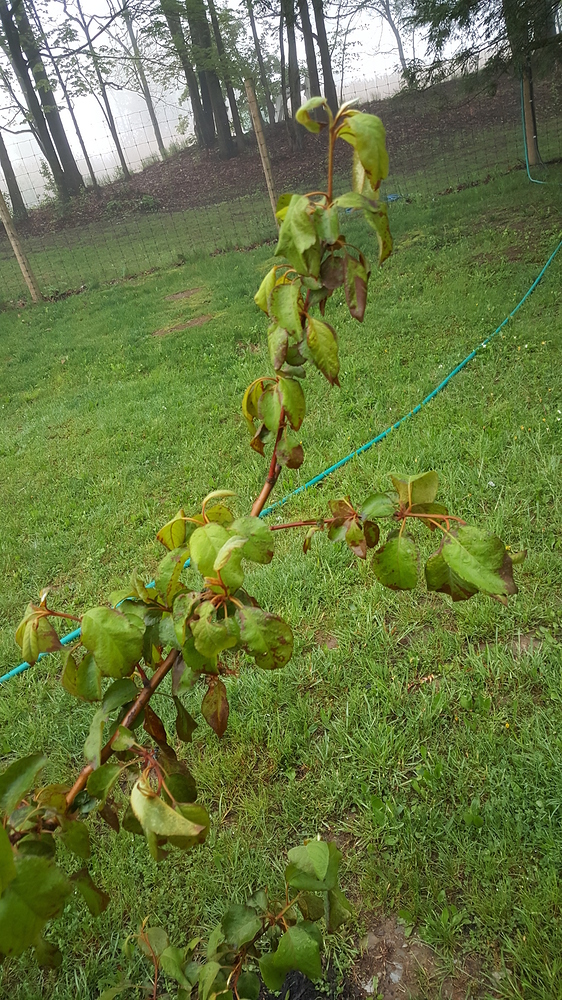 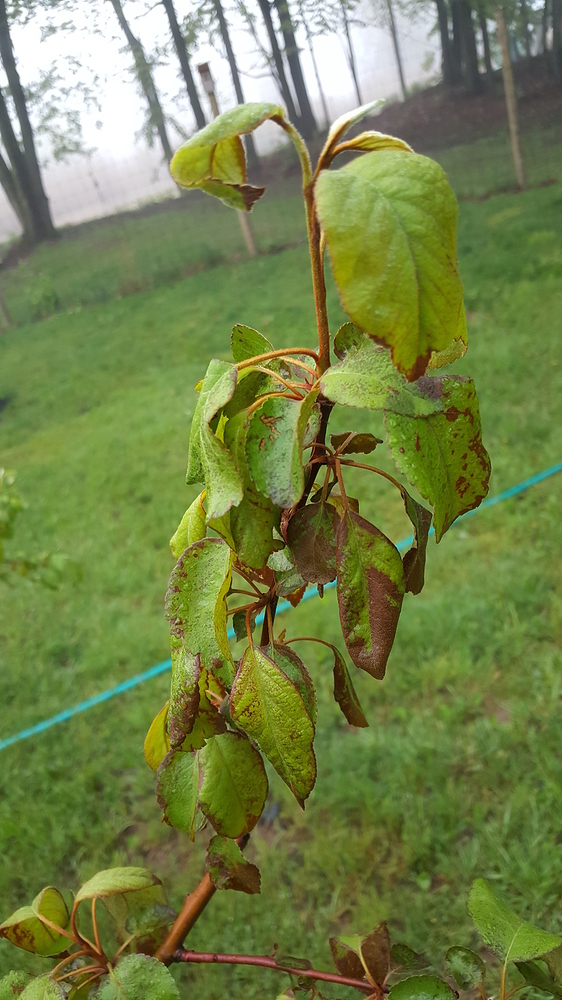 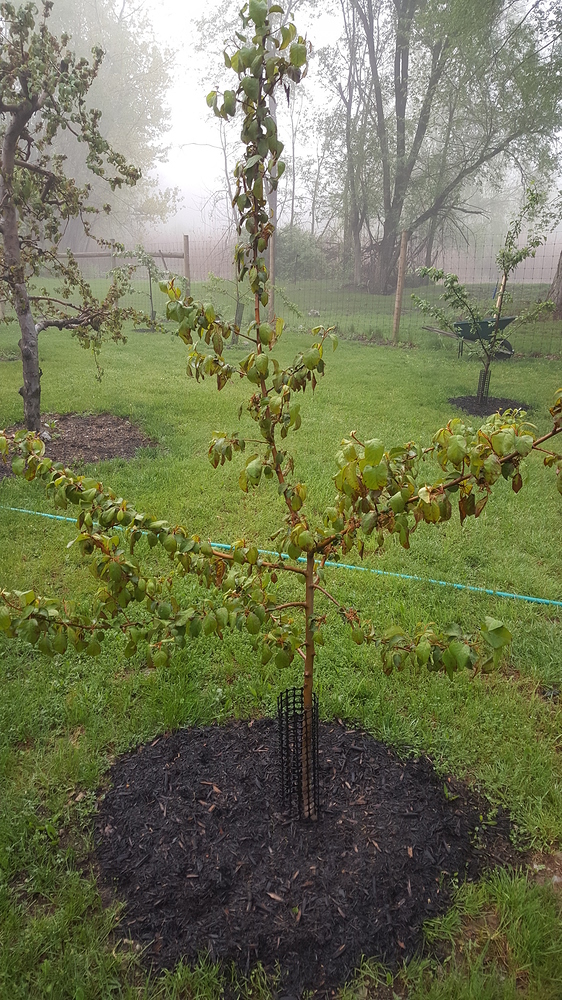 It looks like a little bit of captan burn. Sometimes captan can burn if it dries really slow, or if oil or a spreader/sticker is added to the mix.

I’ve burned some small apple trees before and they always recovered. I’ve not noticed any burn on older tree’s leaves.

The guy may also have used too much captan (thinking more is better). If he sprays them again, you might tell him to back the rate down.

Well thats good news that you think the tree will make it, will the fruit be affected this season?

will the fruit be affected this season

I’m not sure about that part, since I’ve never burned the foliage on a fruiting tree.

Update: the damage has progressively gotten worse. I met with my spray guy today and he has taken blame for a bad mixture. he said I wont get any fruit this season on all my trees, pomme and stone. and all the leaves out are likely to fall (they’re all brown and dead now) . he says he hopes they will leaf out again this season. I don’t know what to think or how to react. he said he carries liability insurance for this type of mistake. but how can that help with my problem, I don’t want money, I want my trees to flourish.
any advice as to what I should do would be greatly appreciated. I will send some pictures when I get a chance to get some

Sean, I’m sorry to hear it. Reading over your update I had a couple of thoughts and I’ll mull them over out loud.

Your guy screwed up and owned up. Well, any human can screw up, but only those of character will own up. So I’d be hesitant to write him off. I do think it would be fair of you to expect some kind of compensation. How to figure that I don’t know, but it would be less in the dollar amount of the fruit (most of us can buy “pretty good” fruit for less than we reliably produce “really good” fruit) than in the lost trees, if that occurs, and the lost year(s?), not to mention the frustration and sense of loss. Is grief too good a word for a tree? I don’t know. Others will contribute thoughts, I hope.

I hope your trees leaf out again and I suspect they will, in which case they might make a good recovery with ordinary care.

One lesson for sure, though: take on your own spraying if at all possible! At least then you’ll never have to wonder who’s to blame …

Update: the damage has progressively gotten worse. I met with my spray guy today and he has taken blame for a bad mixture. he said I wont get any fruit this season on all my trees, pomme and stone. and all the leaves out are likely to fall (they’re all brown and dead now) .

Sorry to miss that call Sean. Initially I didn’t think the burn was bad enough to defoliate the trees.

I’ve never had Captan burn anything, but maybe the long periods of rain and extended lack of sunshine has resulted in overly tender leaf tissue.
I’m surprised that if he is familiar with Captan he’d so readily own up to it being his fault.
Maybe he remembered later that his spray tank previously had Dicamba or Roundup or something in it.

That is a real kick in the guts, Sean and an astounding level of incompetence, it would seem. I am so sorry.

I am quite familiar with Captan burn and as Appleseed says, without the hardening affect of strong sun leaves can be too tender to withstand a labeled dose without some cosmetic damage. The adviser informing me of this issue said “we are trying to grow sound fruit not pretty leaves”, so it is just something to be expected on cool wet seasons with apple trees- unless you refrain from using Captan on those types of seasons, which I usually do to keep customers happy.

I doubt that damage is from Captan or Captan alone. Maybe if there was some oil in the mix you could create that kind of damage. I strongly doubt even a quadruple dose of Cap alone would actually kill all the leaves.

Maybe he accidentally sprayed them with Roundup.

Maybe he accidentally sprayed them with Roundup.

Roundup won’t do that. It takes weeks or months to see damage on a tree. It’s Captan alone or in combination. I’ve knock off some leaves several times, in fact about a month ago. But no permanent damage.

Fruitnut, have you ever seen Captan knock off leaves to the point of completely defoliating a tree? The photo doesn’t even show a heavy Captan coating I’d expect from a huge overdose. I forgot about the delayed result of Roundup application, although I believe it usually only takes a few days for symptoms to begin, even with woodies- not months. Anyway, there are other herbicides. Some broadleaf weed killers are really quick, aren’t they? There is money being made now by spray people eradicating dandelions from lawns.

Some broadleaf weed killers are really quick, aren’t they? There is money being made now by spray people eradicating dandelions from lawns.

Based upon Sean’s description that’s what I’m thinking now.

The guy didn’t clean/deactivate the chemicals/herbicide in his tank. What’s sad is that Sean seems to have hired this guy as a professional. Good call Alan/Apple.

As Fruitnut/Apple alluded, my guess is it’s probably something fast acting like dicamba.

I hadn’t even considered this. I don’t even use the same sprayers for herbicides /tree sprays for this risk. Because of this I own two 25 gal sprayers, one 60 gal. sprayer, two backpack sprayers, three pump up hand sprayers, and one airblast. On the very rare occasion I have to use a tree sprayer for herbicide, After I’m done, I totally rinse out the sprayer, fill it with an ammonia solution and let it sit per University recommendations.

They all look like this now. getting worse. It also killed my grapes because he sprayed them as well. do you guys think this could actually kill my trees? or just set them back this year? 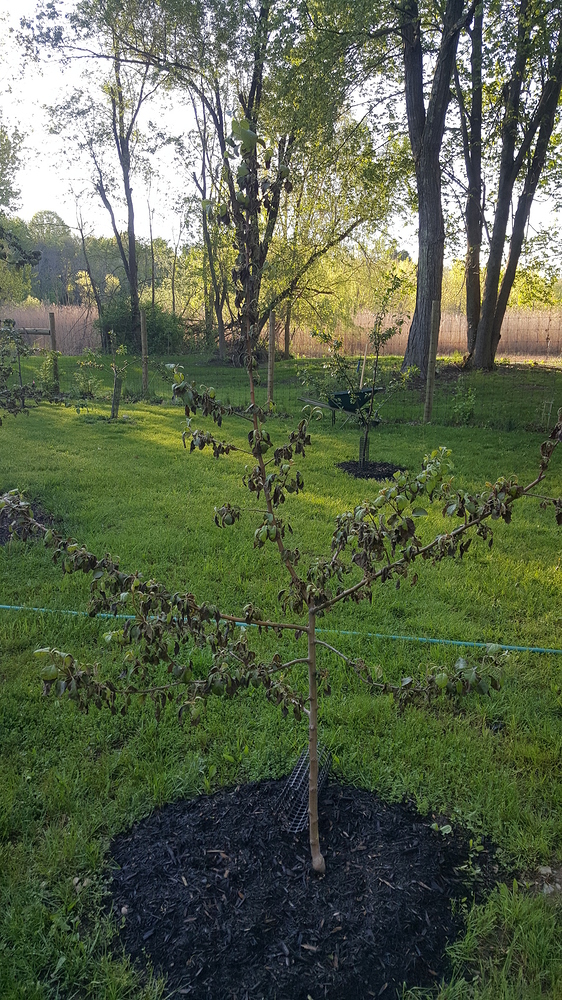 If it’s just a contact action damaging the leaf tissues then the tree should grow new leaves and survive. If it’s something that travels through the trees tissues then you could be in the same boat as thecityman, dead trees. I think it would have to be a herbicide to kill the tree. A fungicide or insecticide should just damage the leaves which can be regrown.

I’ve actually seen similar herbicide damage as that to pear trees that was the result of a granular application of a new herbicide product that turned out to be more volatile than the manufacturer thought. The trees did recover.

Folks, it just occured to me that Sean is someone who found me through the old GW forum a few weeks ago and bought some of those trees from me. This sucks even more than you realize, because he was so excited about the new trees and grafting some wood I gave him. I showed him quickly how do do a simple splice graft and it just fired him up to a whole new level.

Sean…oh Sean. I am sooooooo sorry this has happened to you. I feel I can relate to what you are feeling more than almost anyone. As fruitnut mentioned above, I had about 18 trees killed, 10 more severely damaged, and 50 more the lost blooms, fruit, and had some wilting. The situations were entirely different- mine was a careless neighbor using 2, 4-D on his hay field, and for what its worth it didn’t look like your damage at all. But the emotional toll…that I understand more than you know. You are just getting really fired up about growing fruit (like me) and had such high hopes and excitement for the coming season. Then in an instant, you’ve lost an entire fruit and growing season and you’re highest hope is just that your trees will live. OMG it hurts so bad. Its not an overstatement to say it hurts like heck. I can say nothing more than I’m sorry you have to go through this, and hopefully trees will be ok in the long run.

I’m sorry to read about your spray guys mistakes. I lost leaves from spraying before. It made feel like I didn’t want to spray anymore. Mine turned yellow then fell. Yours look harsh, hopefully your trees and grapes survive.

Sean
I suggest you read thecityman’s thread on what happened to him with spray drift if you haven’t done so already. The reason I suggest this is there is a lot of info in that thread on finding out just what your trees were sprayed with ( if that is what you want to do ) and how to decide what compensation you may have coming . It sounds like your spray guy has already taken responsibility for the damage but that is today and you haven’t talked amounts yet. Collecting and keeping some samples now may be a smart thing as it sounds quite possible he made a mistake with what he sprayed them with. Not implying for you to be a hard *** if you don’t have to but , he knows if he sprayed the wrong thing or didn’t clean his equipment after spraying something else or didn’t mix what he sprayed the right way . It doesn’t take much time to document now ( and collect some samples) for proof if he changes his mind later on compensating you for the damage he caused .