Thanks for the recommendation! I went to the page on Fruition Seeds and read the backstory, neat. I’ll add this one to my list!

I had a great growing year. It rained a lot and was hotter than hell. 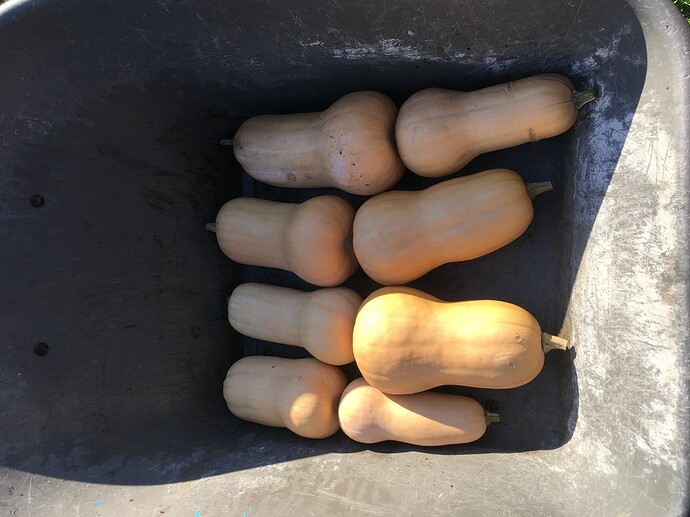 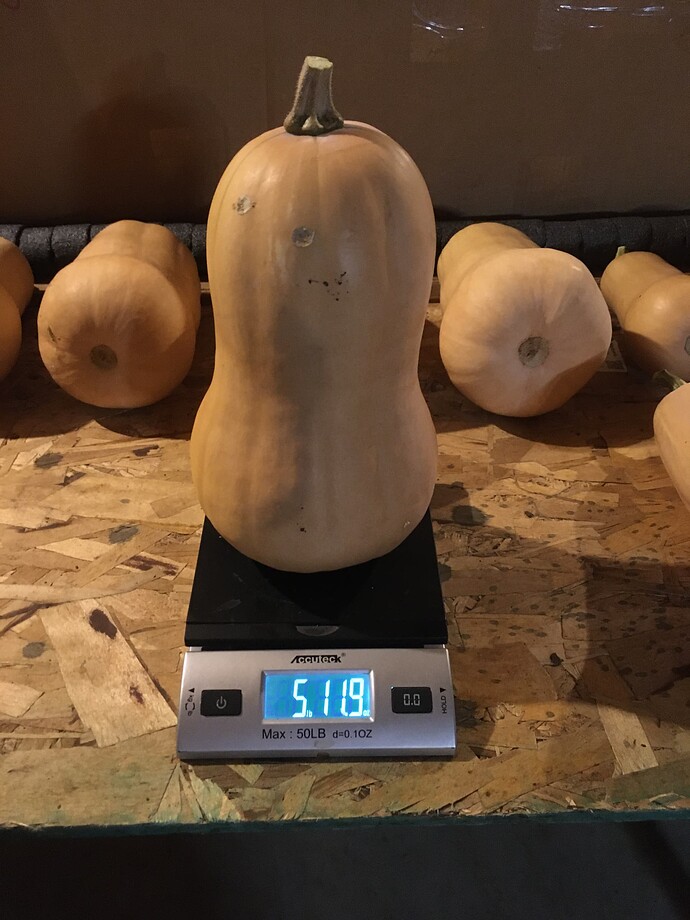 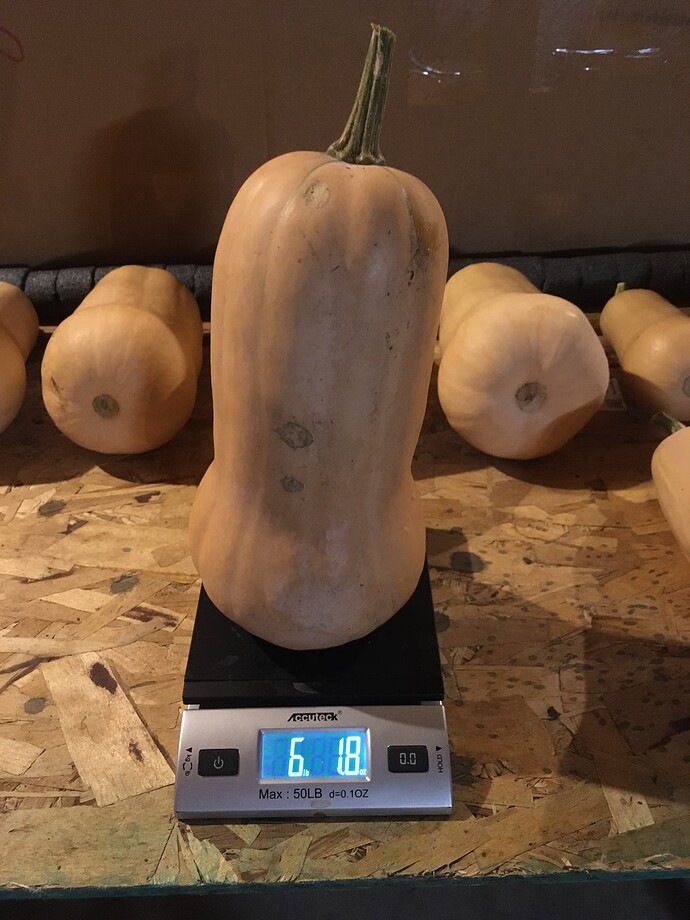 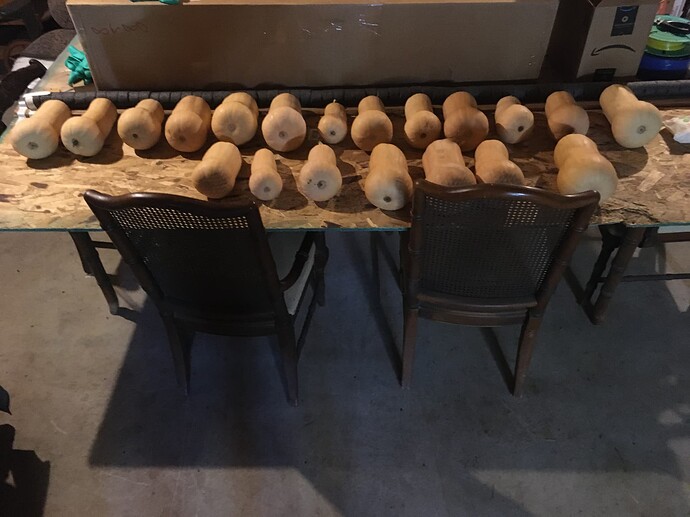 Trombocino and an 8 year old 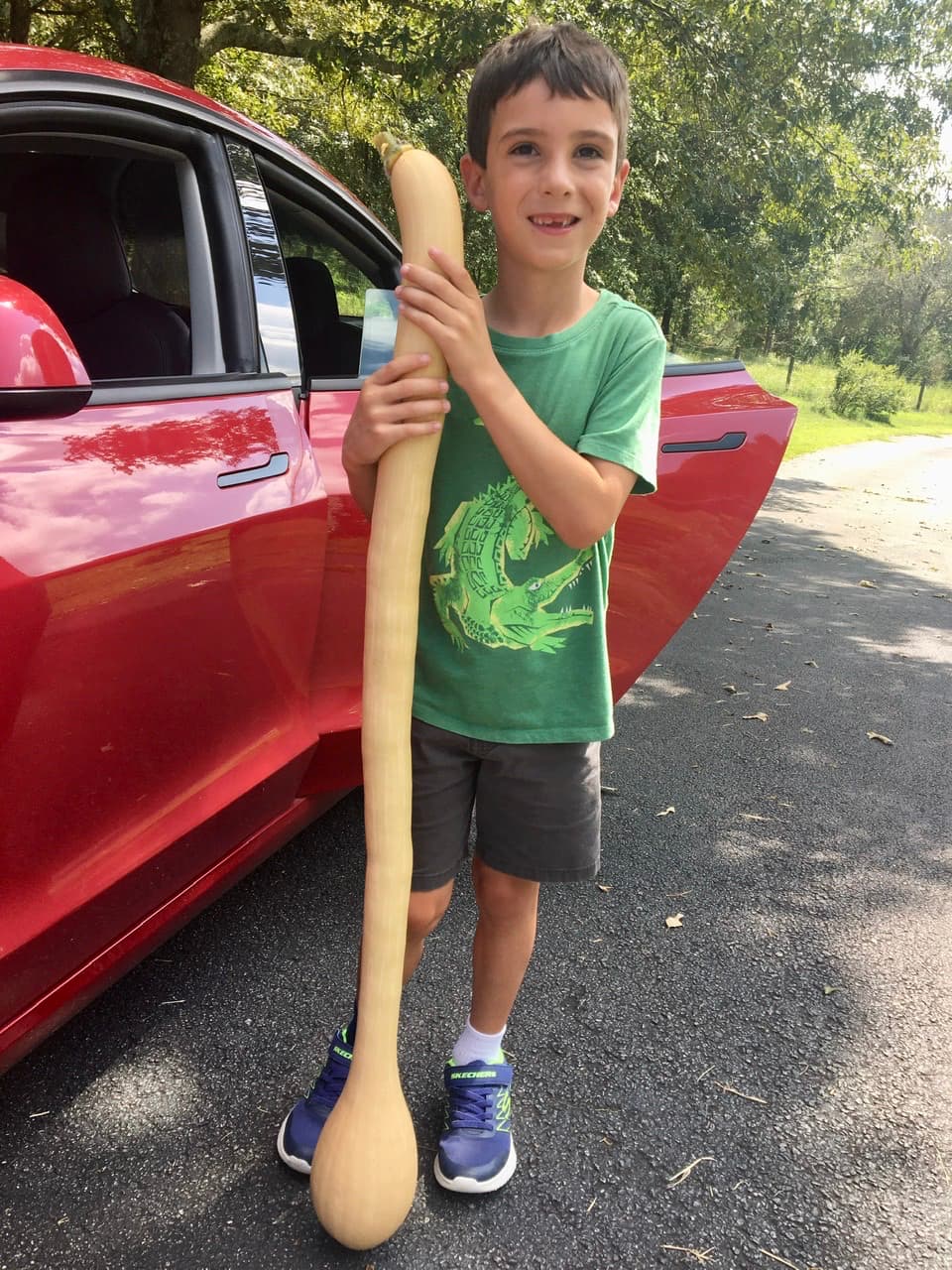 nice Dax! i tried to grow some but the cold, wet spring killed them. will try planting out later next spring. i finally have 2 watermelon about the size of a softball. how can you tell when watermelon are ripe?

When the spot in contact with the ground turns yellow watermelon should be ready. 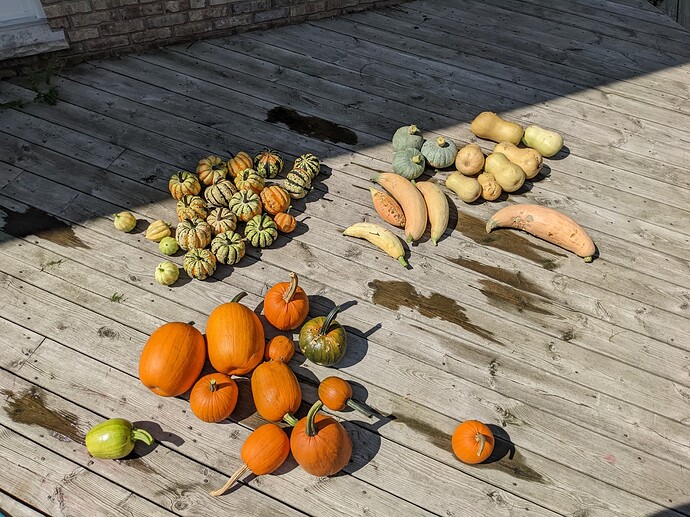 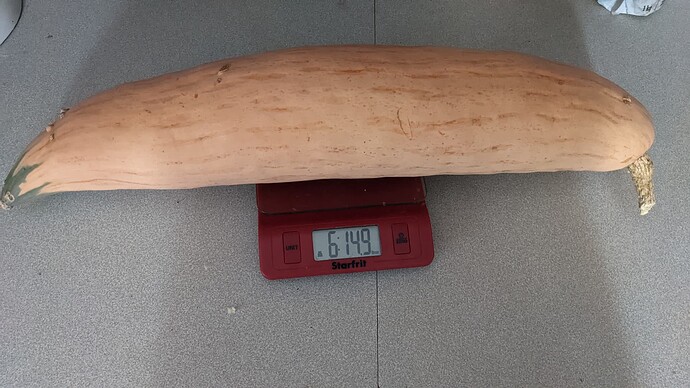 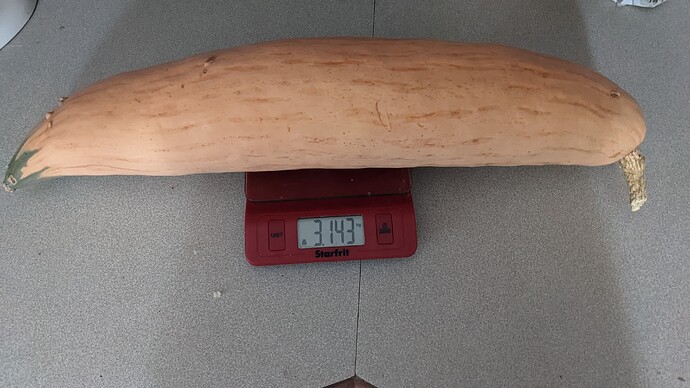 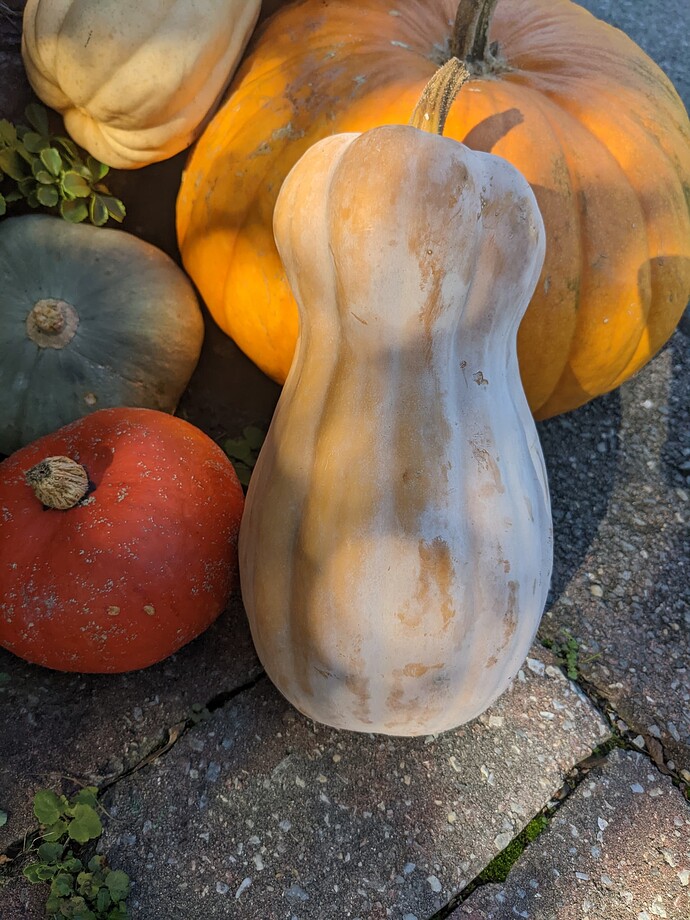 One of my centercut tromboncino was an off type and made fruit like this. If it tastes good I will save seed, who knows what will grow next year! I have 4 or 5 like this. 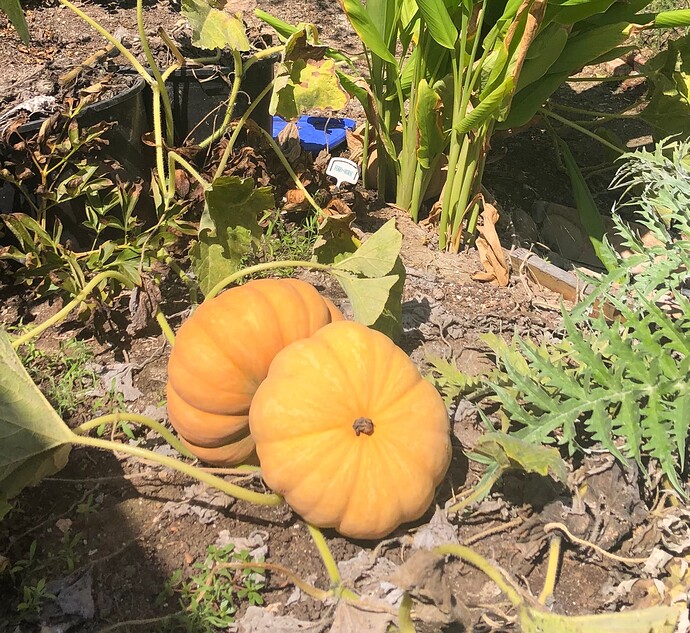 Squashes (and melons) of all types were a total bust here this year. I waded through the forest of 8 ft tall Johnsongrass in the bottom of the garden where most of my squash and watermelons were planted, earlier this week… I abandoned that section fairly early, when almost none grew. Found a couple of butternut types(I had planted both Waltham and South Anna), and a couple of small green somethings that I don’t necessarily recognize.
But… have one ‘volunteer’ that popped up here at the back porch, that’s run all over the back yard, producing several huge delicata-looking squash. I’d tried growing delicata several times before, and they always lacked vigor, and produced very few, small squash… color me unimpressed… but if this one tastes good, I’ll probably save seeds and plant them next year to see what the next generation looks like!

I have been unimpressed with delicata, too. Low vigor and honestly not that tasty.

The strangest hybrid squash I have ever seen in my garden. 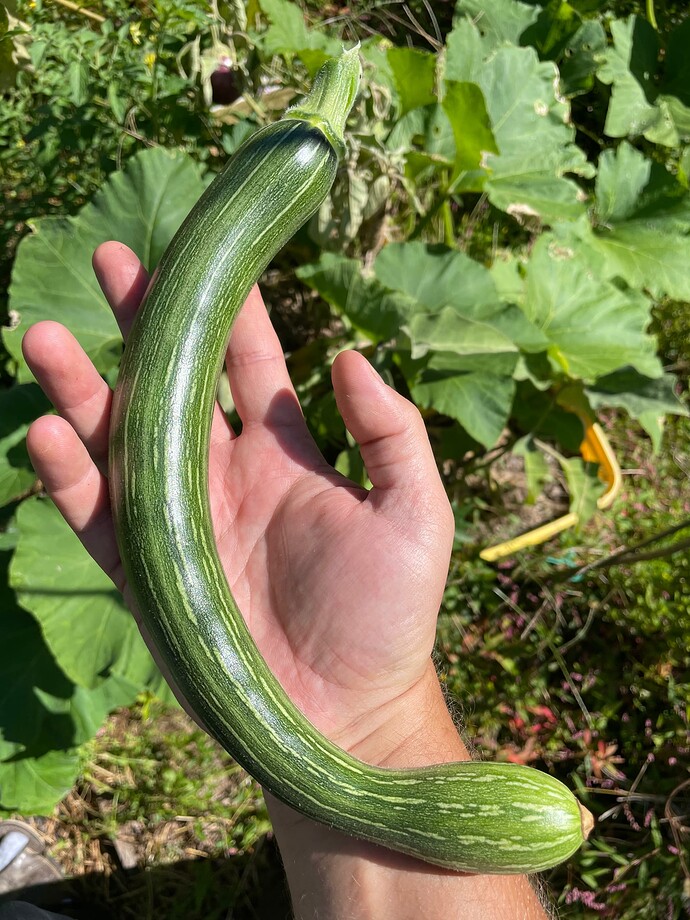 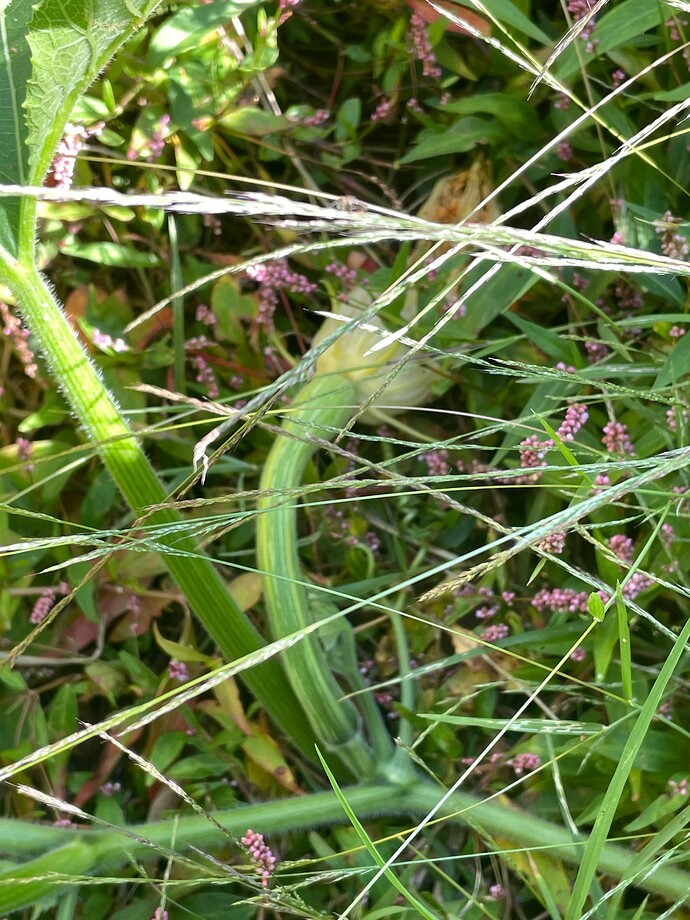 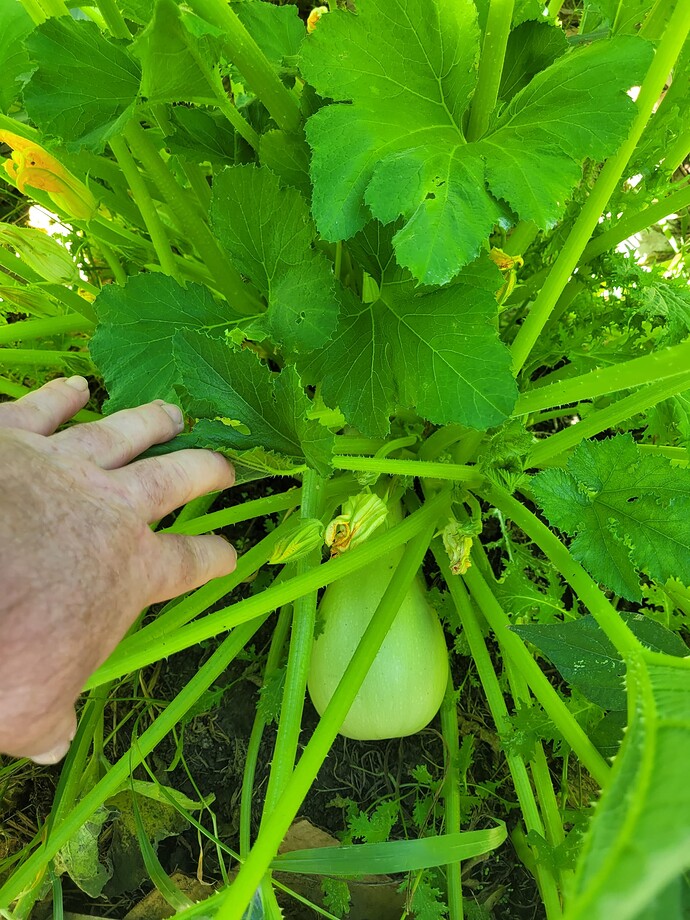 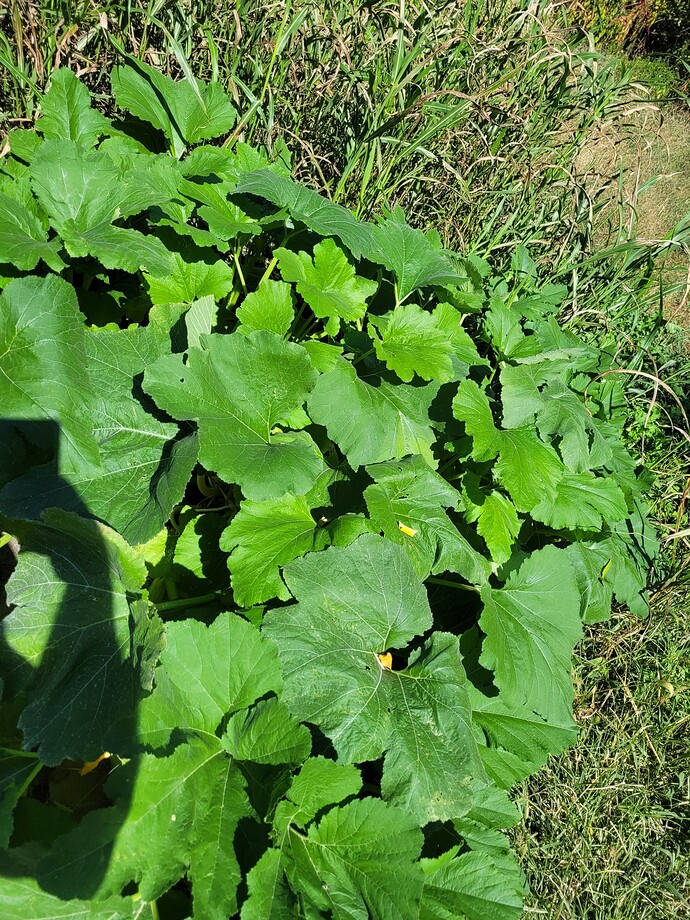 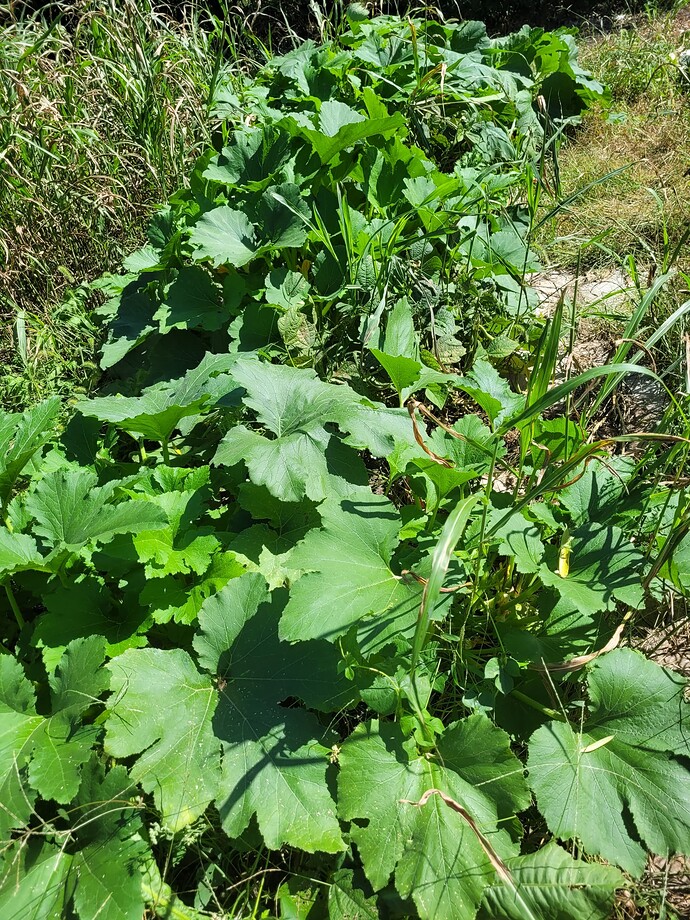 What variety is that? It has the shape of a butternut but it is not growing as a vine.

Some are like that Second cropping with white zucchini squash

Was gifted seeds of “South Anna Butternut” (“Waltham Butternut” X “Seminole Pumpkin”)—so trialed those this year. Impressed by performance so far—a very productive, disease-tolerant squash. Too early to make any definite statements—they may, after all, sweeten up and improve in storage—but the non-stringy texture and flavor are so far better than “Cherokee Tan” (a durable native moschata, very similar to the Seminole Pumpkin which went into this cross), but somewhat inferior to W.B. It’s not something I’d complain about eating over the winter: especially if times get hard.

And that’s where I think this one has potential—as a survival/lean times squash—something that’ll pump out decent, nutritious food with very little input. If it stores about as well as its Seminole parent, it’ll be a real winner.

This is not really a stable cultivar—more of a population; the fruits are quite diverse. Many look just like butternuts, some are more globular like the Seminole. And a few take on weirder forms: sausages, torpedoes, or fat barbells. Some are light tan—like a butternut—while others are orange-ish with green striping.

Here are some I picked recently. This represents less than a quarter of the overall harvest. 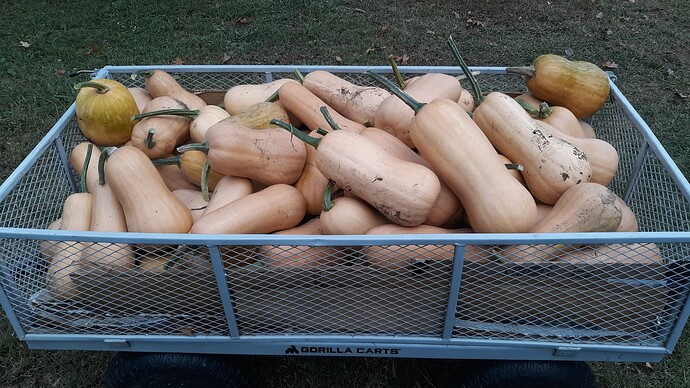 Not bad considering that after planting them and giving them a little fertilizer I left them to their own devices all season. No spraying, no care whatsoever.

Pumpkins harvested this year, I think this variety is pest free here. 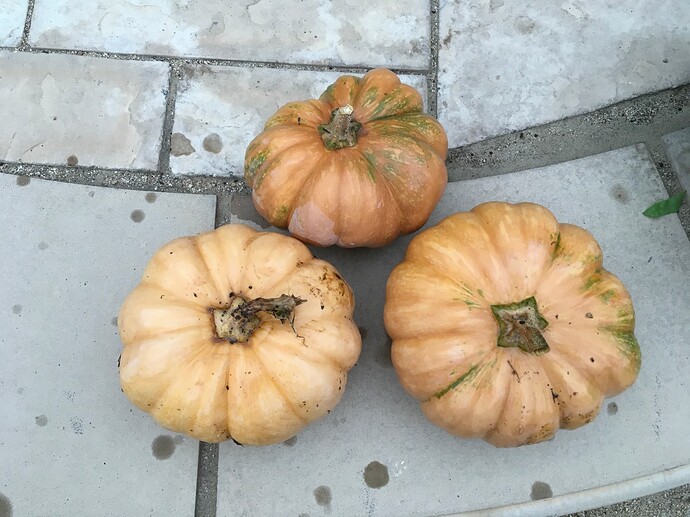 The zuchini are still coming 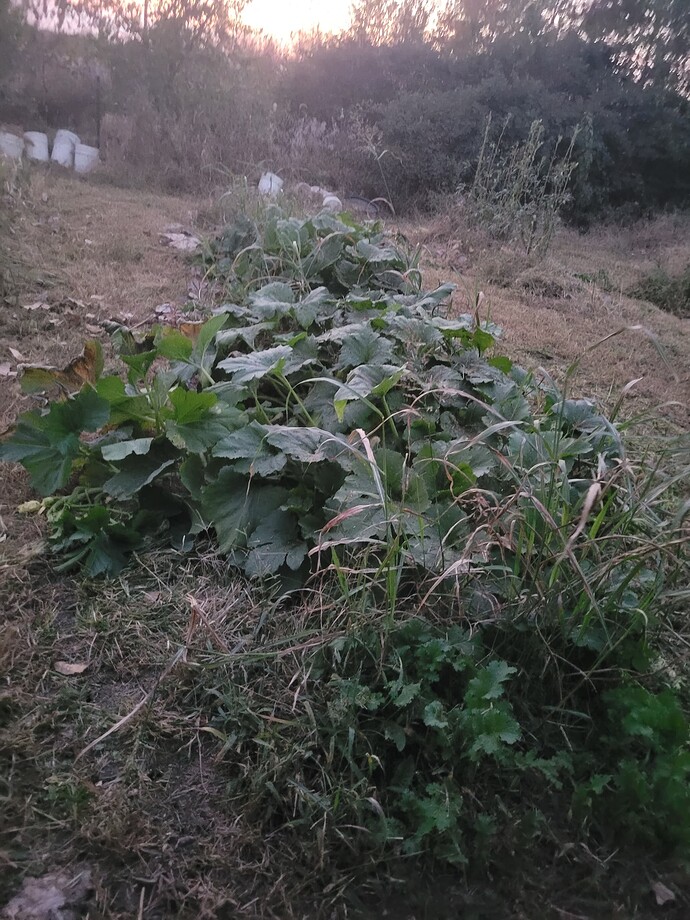 Finished them up. The best we ate are these a few days ago. They are incredibly good if harvested when they are 6 inches. 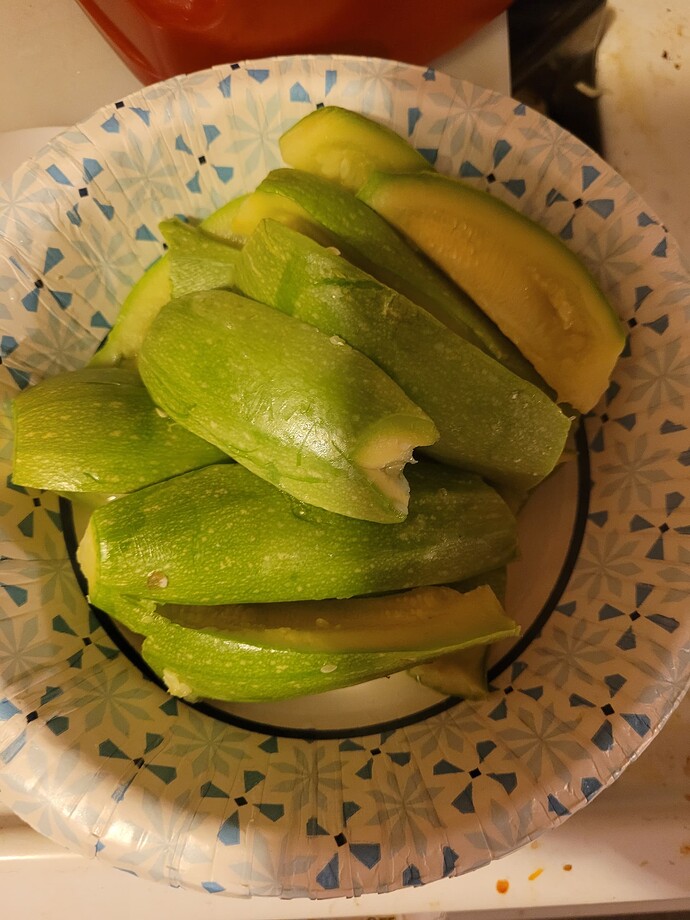 Squash & melons both were pretty much a bust here. Not a single summer squash lived long enough to make a fruit. Planted a half-dozen or more different winter squash varieties, but ended up with less than a dozen total fruits… looks like a couple of South Anna butternuts, a few Seminole pumpkin, and a couple of Mrs. Amerson squash.
But! I had a volunteer squash pop up at the hydrangea next to the steps at my back porch that we allowed to run… it produced 16 Delicata-looking squash averaging a little over 5 lbs each. On previous attempts at purposely growing Delicata squash, I’ve rarely had a vine produce more than a couple of small fruits, usually less than a pound! 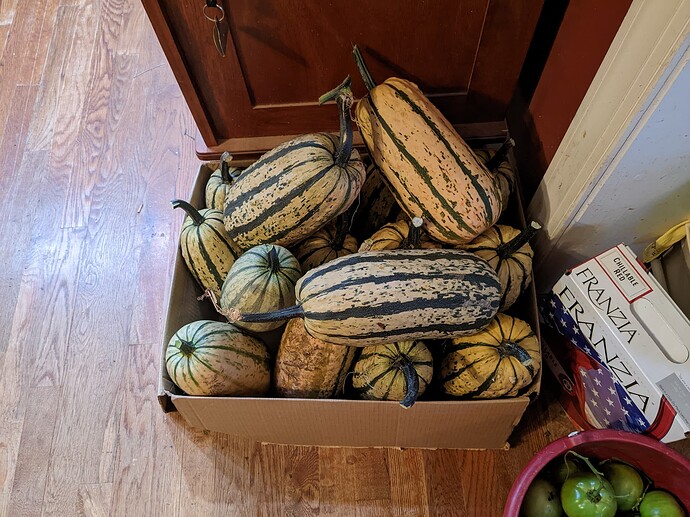