They dig holes everywhere! I planted a bunch of daffodils and colchicum, and they’re digging all over.

They don’t eat them, I think they just like the soft, disturbed soil, but they’re still making a mess of the place. Does ANYTHING really repel them?

I was going to make this comment a few days ago on another thread. Glad you brought it up. The squirrels this year are beyond annoying. On a bike ride this weekend i almost ran one over. so close. Huge spike in squirrel numbers. Parks are full of them…herds? packs?

They dug up tulips the day after i planted them. I don’t think they did any harm though. The annoying thing has been them digging in potted plants…since about mid summer. It got really bad when it dried out and i dont’ think they could dig in the hard ground.

I may try laying chicken wire under the mulch. They might dig in the mulch but at least they won’t get into the dirt underneath.

great little gun for vermin. my father had a h+r break action and liked to sit behind his lilac over looking the orchard and garden, early and late in the day to whack the red squirrels we have here. it had a full choke so he could hit them at a good distance. crows caught hell too. when we got up later he’d have us bury them in between the rows of veggies.

(edit I know mice are not suppose to like Mint ,
I wonder if that’d work as well if they are doing it or for squirrles )

I think I interpreted what you say though as
$&# %$* #
Stocks & Losey $
astrick preocupied with squirrles percentage of time
to deal with the stock market.

It is pretty easy to lure them into squirrelinator traps and a lot less time consuming than imitating Elmer Fudd. I’m afraid I lack Moose’s skill and knowledge- what the hell is an h r break act.?

I usually miss squirrels when attempting to hit them with a 20 g. shotgun, believe it or not, except when they cooperate by not noticing me or freezing in place. once they start zig zagging in hasty retreat between objects I don’t want to fill with lead I tend to miss.

I have a cheaper source I can find for you if you are interested, but this is what I’m talking about. I use a mix of peanuts and black oil sunflower seeds to lure them into traps. Then you can shoot them with a pellet gun or drown them once captured.

A H&R break action is a gun. Im assuming that it is a shotgun or .22 rifle. Quite accurate and quite deadly. They also made a rifle/shotgun double barrel, with a small caliber rifle barrel over a .410 or 20 gauge shotgun barrel.

dads was in .410 single shot. he was a avid hunter so he enjoyed the task. when not killing vermin he used it for grouse and snowshoe hares. cheap but did the job. they rarely noticed him hiding in the lilac, sitting on a chair. never knew what hit them. he’d puff on a cigar and sip coffee while waiting, never moving quickly to give away his position.

They have been super annoying here this year. Since we had the late freeze this spring that wiped out the majority of fruit/nut blossoms they have been in a frenzy. The first half of the summer they were constantly up in our old cottonwood tree stripping bark from the newer growth, constant mess on the patio and deck. Then the chokecherries which bloomed later came in(thank the Lord) and that occupied them for quite some time.
We got to have all of the ripe figs up to mid September, but now I rarely get one. Under-ripe figs are now on the tree rats radar and they have far more time than me to stop in check for a snack. They also destroyed over half of my pumpkins and butternut squash. Oh!..And!..they ate the one single pear that made it on both of my pear trees as well as cut my pomegranates off but didn’t like them so basically just ruined them because they weren’t ready yet either. Grrr. I’m not around enough to catch one in the act because I would thoroughly enjoy using the pellet gun. I am going to have to get one of those tube traps for the future. It’s too late this year, not to mention the time thing. As it is I would just be having to clean half rotten squirrels out of the trap every few days because I don’t have the time daily. Phew, that felt good to get that out! Now I just need a thread titled &^%^#&$(# neighbors cats!! They do so much damage rolling, digging, and pooping in my garden soil and blueberry beds. Disgusting little pricks, I prefer to have the rabbits they eat. Rabbits are much easier to fence out than cats.

Frankly, some of the money being spent on the corona virus should be spent on a virus that eliminates squirrels…if anyone wants to play God…there’s a place to start.

I just watched a video on flower bulbs by the greengardenguy today where he mentioned this issue. He recommends dry granular squirrel repellent which you spread over the top.

The relevant part is at 8:45 for reference
https://www.youtube.com/watch?v=KubS-jh0aNA

I can usually stop trapping in Sept as I have eliminated so many that I don’t get a big uptick. But this year there is a fresh new swarm out there now so I started baiting the traps again a few days ago. The kills are piling up quick. They are also triggering my groundhog trap which is annoying, I need to trap groundhogs more than squirrels now.

I buy chopsticks in bulk on amazon and stick them around the bulbs about an inch apart. Keeps them out. They don’t jump over after that. Disposable forks also work.

Just be happy you don’t have a huge problem with coons. Killing them at the numbers I am now is not fun and all I’m protecting is a couple of bushels of Goldrush apples. I’m not even sure how good they will end up being this year. The one’s I’ve eaten, even from the same tree have been uneven although the same yellow color. The last one was bland the preceding one perfect. They had equal sun exposure.

More of a human population density map but i feel they have higher numbers than we think. They are coming right for us 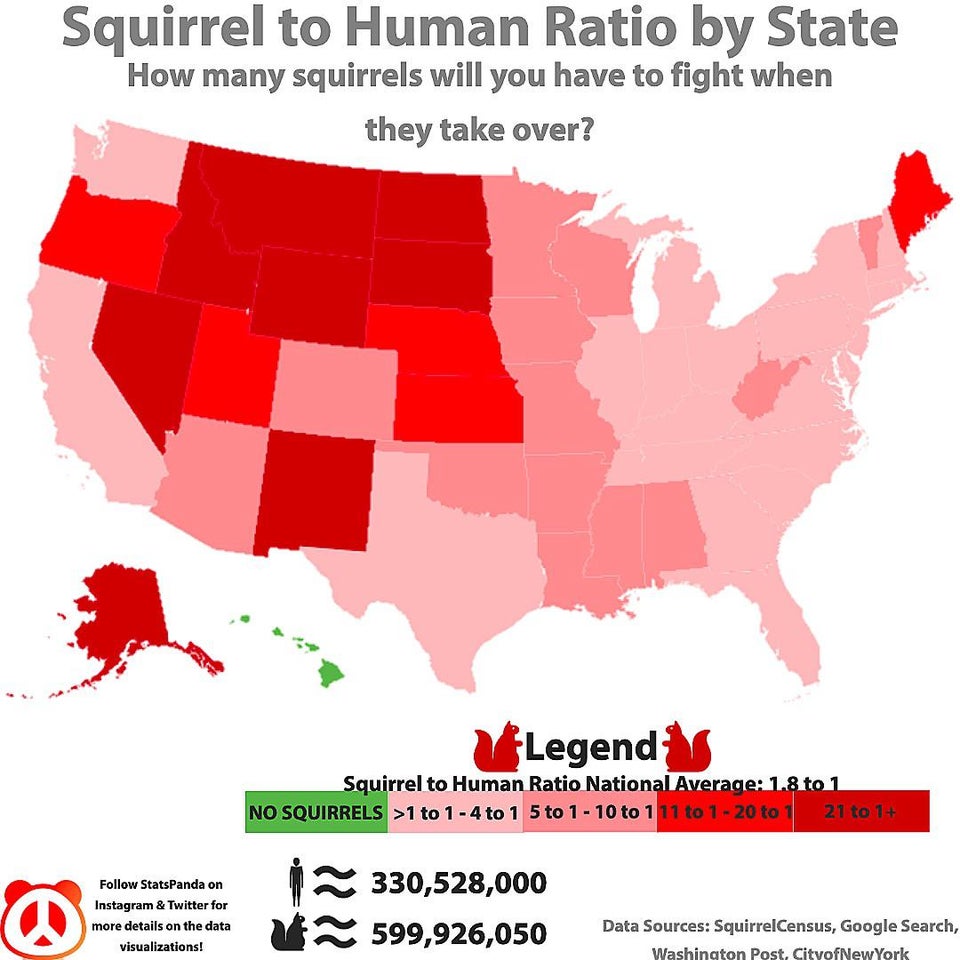 That seems to say more about the people population density than it does about the squirrels.

i can say the northeast and mid atlantic are infested with them. as is most of the south. s. Maine has a lot but up north here we have the small red squirrels and there aren’t that many of them.

They definitely are and I am seriously questioning the squirrel population only at 660 million. I wonder what the chipmunk population is?

unfortunitly its only going to get worse as people keep feeding them and the cities don’t allow people to hunt or shoot them. i wish we had the grays up here to hunt but then i hear horror stories on here and it changes my mind. funny thing is theres a small population of grays in nearby ft kent that feed on the red oaks planted around the university there but they never spread out from there. maybe because red oaks don’t naturally grow in our forests up here. but we have beechnuts and hazels. how they got up here in the 1st place is anyones guess. the next closest population of them is 3 hrs. south of here. when i worked as a security guard at the university, i used to see the reds gang up and chase the grays even though the grays were double their size. was funny to watch.