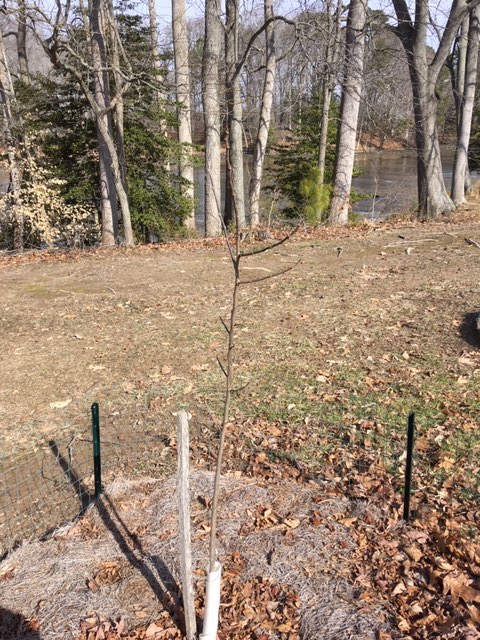 This is a “Sunflower” pawpaw from Hidden Spring Nursery, TN, two years in the ground in full sun here in Maryland. It has almost no lateral branches until the 5 foot level. None of my other six pawpaws grew this way. I want low branches for picking and thinning.

If this were an apple tree I’d whack it at about 32 inches to drive out laterals. Would a pawpaw respond the same way to a heading cut? What do think?

I just remembered I grew this tree in a tree tube the first year- maybe that’s why it has no low branches. Hmmm, I’ve used tubes before without this absence of low limbs happening.

I have a Shenandoah that’s been growing like that after five years in ground. There’s not much growth each year and what does grow seems sort of weak and spindly. I think unpredictable growth is part of the problem with some of the lesser grown fruits that just use random seedlings as rootstock – there’s really no way of telling what type of growth a random seedling will give you. I’m going to cut mine way back this year and fertilize heavily to try to reset it.

Cutting back would be the surest way to get low scaffolds.
Notching above low branches/ buds in another option.
I agree with SMC strategy , of cutting back and heavy fertilizing.
Pawpaw seams to really like nitrogen, especially from organic sources .

Thanks. This was one strange pawpaw.

Hmm… My 4th year Shenadoah grows ever slowly, too. It’s barely 3 ft tall while the Mango is going twice as big. Is it because of the variety?

@hambone, I’d whack yours back, too. I also like the notching idea. I only have a Sunflower grafted on a Mango. It has grown very fast.

My 5 yr old shenandoah is still 3 ft tall. It has two cankers near the graft union that are now healing over, but it was fighting off some sort of pathogen the last couple of years. 5 yr Susquehanna and and 3 yr mango are 7 ft tall. They dont grow much unless i give lots of N. Monthly 1/3 cup doses of 33-0-0 is what ive been doing. My soil is mostly sand.

My 4th year Shenadoah grows ever slowly, too. It’s barely 3 ft tall while the Mango is going twice as big. Is it because of the variety?

We had this thread going at one point. And looking back at the posts it does look like Shenandoah has been a slow grower for many of us. How Vigorous is your Pawpaw?

Mine seem happier under a 40% shade cloth too. Growth shuts down once the first few 90F days hit in june. They keep growing on into july aug with the shade and leaves dont get scorched like they do otherwise.

I’ve got a ten year old unknown seedling pawpaw from Edible L. whose leaves look scorched starting in July every year. Wonder if shade cloth would help it? All my other pawpaws are in same full sun and do fine. Can a person buy small quantities of shade cloth? Does it specify 40%? Thanks.

I like Gempler’s shade cloth (it stretches.) It’s isn’t heavy and lasts and lasts. I’ve had a piece longer than a decade but I ripped it accidentally on several places and eventually bought a new piece. It would probably last 20-years and it’s feather weight.