Summer calls for Ice Cream - Mangoes, that is

My Ice Cream mango decided to bloom a second time this spring. I am little excited to be able to share a couple of shots of the flower panicles. 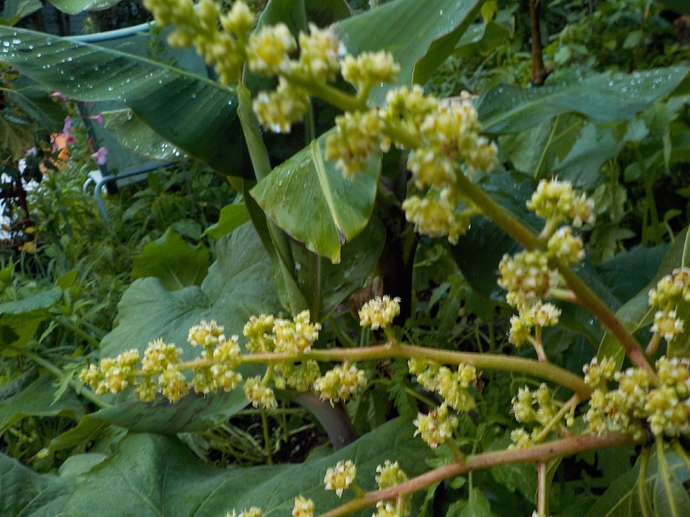 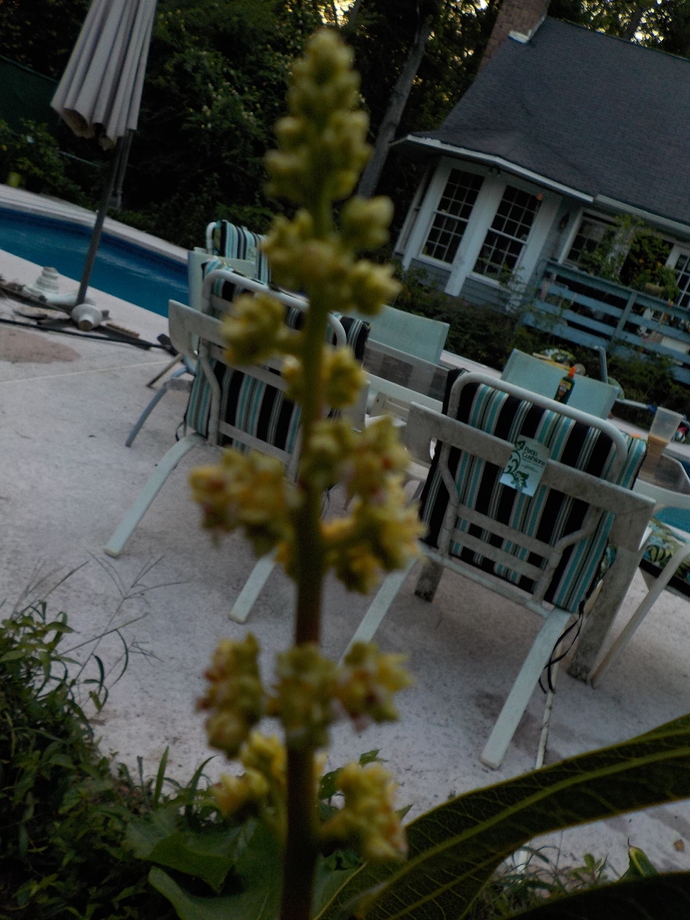 The background foliage in the pics are a Mahoi banana that is supposed to be there, and a ground covering of butternut squash and tomato vines that had sprung up while I was away. I decided to allow them to continue growing, and now they are producing well and allowing the ground moisture to be used productively instead of having so much go straight to evaporation.

Another shot from two days ago. 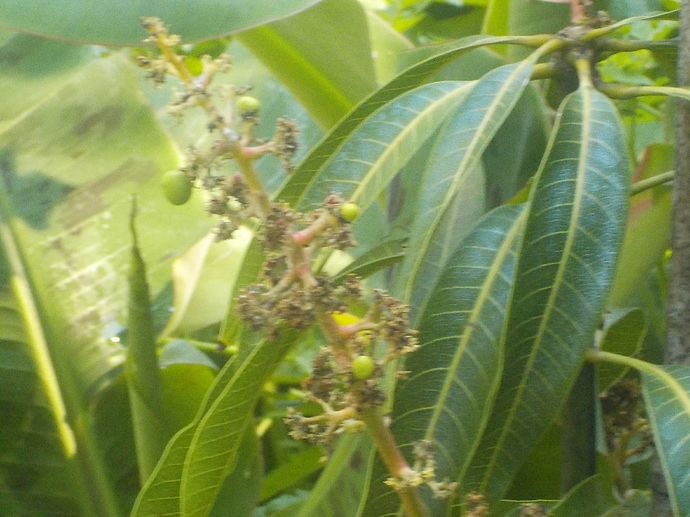 And now we’ve got some itty bitty baby mangoes developing!

The Ice Cream mango has very attractive foliage of dark green narrow leaves with lighter colored veins which give them a somewhat striped appearance. The leaves can be seen behind the flower stalk with the little fruitlets.

Mango flower panicles are covered with hundreds of very tiny flowers which are not normally pollinated by bees, but by ants, flies, and other small insects.

I’ve been checking on those babies several times a day, hoping that one or two hang in there and grow into fruit. Two of them have already developed farther than the Carrie mango fruit managed to make it. Carrie had to deal with being transplanted just as it was setting fruit, though.

I really am excited just to get my mangoes far enough along to flower and at least attempt to set fruit. I wanted to share my happiness with all of you.

I’m so jealous. If someone will please develop a mango that can handle zone 7, I’ll make them rich.

I have mangos this year, too, Muddy. Very excited. They are a few special varieties bred to be more cold tolerant (although haldog, not to zone 7, sorry!) At least 2 of my three cultivars have set this year. Hoping for my first mangoes this season! I’ll snap a pic tomorrow, to share.

Hoping for my first mangoes this season! I’ll snap a pic tomorrow, to share.

Great, Patty! I think I remember you talking about ordering some special ones for your area. I hope they do really well for you.

@haldog I don’t recall exactly where you live, but note my zone at the end of my name. 7B isn’t all that big of a jump from 8A. My winter hardiness zone is one of the big reasons I’m excited!

I hope to get one or two to maturity this year. If it doesn’t happen, I’ll consider it a practice run for next year when my trees are a bit bigger and a little more mature.

If you crave them enough to want to take on the challenge, you might try what is called a condo mango. Those mango trees were developed to be able to be kept small enough to be suitable for container growing in order to fulfill the desires of Floridians who lacked growing space. Carrie and Ice Cream are two of the condo mangoes. My trees live indoors with me when it’s too chilly outside. They are in the ground for now, but will be potted up for the winter.

If someone will please develop a mango that can handle zone 7, I’ll make them rich.

I agree! There is a lot of desire from mango lovers outside of their growing zone.

Are those in the ground?

I love mangoes…i’m kind of sick of the Ataulfo types though.

In the past decade, we went vacationing in Florida 3 times. One of those times, I lugged back with me couple of named mangoes trees from a nursery somewhere in St. Petersburg. Potted them up and babied them for years until they slowly departed my cares for the mangoes’ heaven.

Now looking back, I don’t even know if my selections were pot-trained or full sized trees given I live in zone 5 Chicago! I would have very hard time getting any fruit, if they ever matured into adulthood!

Ignorant was my number one enemy! And it still is…

I remembered at least one time while driving back from the Sanibel Island’s beach trip, we stopped by a random fruit stand. At the time, the vendor/farmer had only yellow mangoes displayed on his shelf. I bought half a dozen that were plumed with quite strong of a sweetly fragrance fruits. Maybe more so especially under the hot tropical sun. My kids and wife and I LOVED IT!

We have not found that compatible sweet taste and fragrance from grocery store’s mangoes up north!

I want to grow them too…but i don’t want the heating/electric bill that goes with it. I think there was a dude growing them in his garage somewhere way north. Not sure what became of his trees.

Are those in the ground?

Yes! Both mango trees are planted in the ground, as well as a variety of six edible bananas, 2 types of dwarf hermaphroditic papayas, a carambola (starfruit) tree, and an assortment of pineapples.

In all likelihood, I’ll be digging all of those up and bringing them inside for the winter, as much because they need a drier season as because of temperatures. Maybe not the largest papaya, though. Those things grow like gangbusters once they get going!

I believe they usually take five to six months. Don’t hold me to that. Moreover, that tree is still young. Just like any young fruit tree, it may shed them in favor of growth. There will be a better chance that they hang in there next year. I think it may have been transplant stress that induced it into this second flowering, although some types do have a tendency to flower twice a year. [quote=“warmwxrules, post:8, topic:6232”]
I want to grow them too…but i don’t want the heating/electric bill that goes with it.
[/quote]

That might be less of an issue than you think. It’s not like they need high heat during their season of rest.

may just be 3-4 months if getting plenty direct sunlight, and considering that ice cream fruits are smallish. Good thing about roundish varieties(ice cream, alphonse, etc) is that they are generally already pretty good(not sour) even if immature, so should the cold of autumn arrive sooner, one could harvest them, peel, and cut up into crisp mango spears.
i actually like the ice cream variety as a crisp fruit, and not as ripe fruit–more zesty at that stage, as opposed to the fully ripe fruit.
two good ways of gauging maturity would be to check the peduncle’s attachment depth into the fruit. Generally, the deeper the dimple, the more mature. The other way is to get a bowl of water, and approaching from below the fruit, check if the fruit is foamy-floaty, not too buoyant, or sinking.
The denser, then the more mature.

sick of the Ataulfo types though

sadly, the ataulfo types sold in usa are picked semi-mature(and since ataulfo is not the roundish type, is not as palatable-- a bit too sour, when picked early), just so they will last longer and be more resistant to damage in transit, since skin will be thicker, and will take longer to ripen.
a tree-ripened ataulfo is hard to beat! Occasionally you’d find mature but still-green ataulfo’s with a bluish tinge–those are generally the more mature ones, as opposed to just the bright-green ones.

ataulfo’s seem to follow in the path of the astringent hachiya persimmons, but is instead a little too sour and lacking in flavor when immature(in lieu of being astringent).

I found some Tommy Atkins that weren’t half bad, although lots of fiber makes them annoying. Some grocery store had them as cheap as 10 for $1.00…but they were pretty rough looking! Must be a ton of mangoes because they have been really cheap for the last month (a lot of them i was buying 4 for $1.00.

Maybe not the largest papaya, though. Those things grow like gangbusters once they get going!

I also love papaya///i actually grew one from seed and had it flower…but then the frost got it and that was that (also i know they need male/female). A lot of people don’t seem to care for it…my kids won’t touch it. The seeds are nasty. Once in awhile i’ll find a real ripe Mexican type papaya and i’ll buy it (fully orange). I ate my weight in papaya when we went to Mexico years back. The shocking thing was the size of some of the fruit. Those things get the size of watermelons.

I grew pineapples in the past. Started them from the tops. Easy to get going this time of year, but almost impossible in the colder months. They actually make good houseplants. They don’t need much care. Mine never fruited, but i never forced them.

that is incredibly cheap-- even for a tommy atkins! Where are you based? Quite sure you didn’t get your mangoes from a las vegas grocer, as the most outrageous offerings have seen were 8 for a buck, and those promos aren’t very often.
evidently the farmers in mexico are now growing mango trees in great numbers, and those trees have grown bigger over the years, hence the price drops.
many people here could get to try them as staples, and no longer as pricey novelties.
love those papayas too, and are now available at 2-3 lbs/$, but not as exquisitely flavored as mangoes.

like you, will occasionally buy papayas which have the look and the feel closest to tree-ripened ones

Tommy Atkins that weren’t half bad, although lots of fiber makes them annoying

one reason i prefer some mangoes half-ripe, being crunchy instead of fibrous.

Wisconsin…they must have just been trying to get rid of them before the fruit flies got them all.

Good for you, and for Wisconsin, of all places!
No doubt, their overstock will always be appreciated

you might try what is called a condo mango

Your suggestion sent me walking around the house, trying to picture a six foot tall tree in each room. I just can’t see it. However, with a little furniture removal, I might have a place…

When I first started growing, fruit, I never thought one of my needs would be a bigger house.

Now, you have to figure out a way to schedule a drive to Florida so that you can pick one up that’s bigger than what could be shipped.

That should give you a year or two head start in getting fruit.

Muddy,
Can you educate me a little on mangoes? We have two types that we get here. One is dark green and available most of the time. Then there are the ones I’m buying currently that are seasonal. These are seasonal ones that are 2 /$1.00 right now which are very tasty! Are there a lot more types? 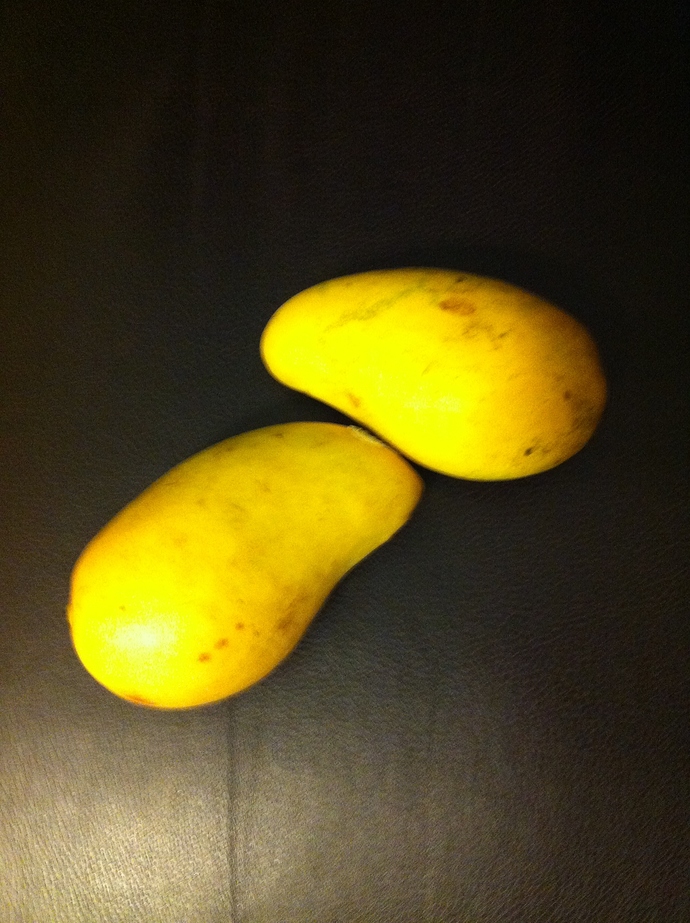 I think those would be Ataulfos. It’s their season now. I like them, too.

The green ones might be Tommy Adkins, which are fibrous and not so good.
Here’s a page that lists the most frequently found commercial varieties, along with a few others.

There are hundreds of varieties, and probably a gazillion unnamed trees from seedlings in their natural growing regions.

I’m sure @jujubemulberry knows far more about mangoes than the wee bit I know. Raf has a passion for tropical fruits and enjoys sharing it.

i agree. Hopefully when the trees in mexico get bigger, the fruits will get bigger too. Ataulfo’s currently sold here are still too slender and pointy. The better ones are often twice the size and more plump. 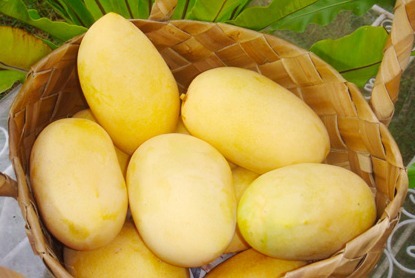 has a passion for tropical fruits and enjoys sharing it.

that makes the two of us!
but like you and many here, i love temperate fruit trees too