Specifically for low humidity, dry winds, areas (Colorado), do any of you have success with haskaps? Do they usually drop all their leaves early in the year, and if so, about when, and do they have second growth later on?

I’m having some (some, not a lot) of second growth…but it’s not uncommon in zones 6 and 7 for loss of leaves in hot part of summer!

I bought 6 from honeyberryusa in April, and 3 romance cherries; everything but Kawaii & Romeo lost their leaves, and not in the summer, but in May (the cherries in June)! They didn’t seem to like the dry winds at all while I was hardening them off, and bringing them back inside all day didn’t help. I’ve been hoping that it was summer dormancy, but a hen jumped up on them this morning & snapped Borealis at its base, and sometime today must have gone back, b/c Boreal Beauty was also snapped off at its base (no signs of life on either). A little while ago I gave the rest a light tug - Juliet, Carmine Jewel, Aurora, and Tundra partially snapped, or came up with a tiny bit of roots attached (rotted roots?). Only Boreal Beast #2 (the first didn’t leaf out & Bernis sent a large replacement, but it also dropped its leaves around the same time) stayed standing, and I didn’t test Kawaii, as it’s doing fine (~8" growth off of the 2 buds it had, some crispy leaves/leaf-edges from the dry air/wind, but otherwise fine). I also did a scratch test on Beast, and didn’t see any green, but honeyberries seem to have a really thin/hard-to-see cambium layer?

Romeo came 2-2.5 ft tall, So, I planted it, and it’s doing okay, even though I waited until just about the hottest week in July (mid 90s) to plant it in the ground (some sun/wind scald when first planted, but it came back strong with a second growth of leaves), but the rest I thought I’d leave potted for the year, then plant them next spring. If Kawaii had also dropped its leaves, then I would think that I must have overwatered them, or something. Now, I’m just confused!

Maybe, the University of Saskatchewan varieties need humidity while they’re tiny, but are okay with the dryness later? Any thoughts kindly appreciated. Also, Hello Growing Fruit (been lurking over this last year since finding this great community)!

where are you located? i have 4 honeyberry and 4 romance series cherries and have yet to have any issues with either. all have come from honeyberry USA. most are year 5 or 6 now.

I’m thinking dry wind and maybe lack of moisture. u of s cherries are drought tolerant but only once established. haskap, not so much. maybe put a deep mulch around them and water more often? I’ve never lost any of those plants here but I’m low elevation and a lot wetter than you. our soil is on the acidic side also.

I usually water them once every 4-6 days, maybe every couple of days during a hot period back in July. Good idea on mulch, I did for the romance cherries, and 1-3 of the haskaps planted in larger pots (Borealis, Beauty & Beast#2, the hen scratched everything on top off, and I can’t remember if I mulched all three) but not all of them; but for those, I did add some loose potting soil on top once, after I saw some had sunk down a bit & exposed a few roots.

I’ve never been to Saskatchewan, but for some reason am imagining dry plains with similar humidity as here, vs Maxine Thompson’s Oregon wet-weather bred haskaps. So, something still doesn’t seem sane. The only other thing I can think of is that Kawaii didn’t shoot-out its two buds & leaf-out until the others were already dropping their leaves - they all experienced a slight freeze. Do leafed-out haskaps drop their leaves after a ~30-32F spring freeze?

Some of that I can’t understand…
but, NO, fully leafed out haskap/honeyberry didn’t suffer any leaf damage at 22 degrees being fully leafed out.
(Some years back, damage at 17 degrees while in bloom…and lost that plant to drought that summer when out of town a couple weeks. 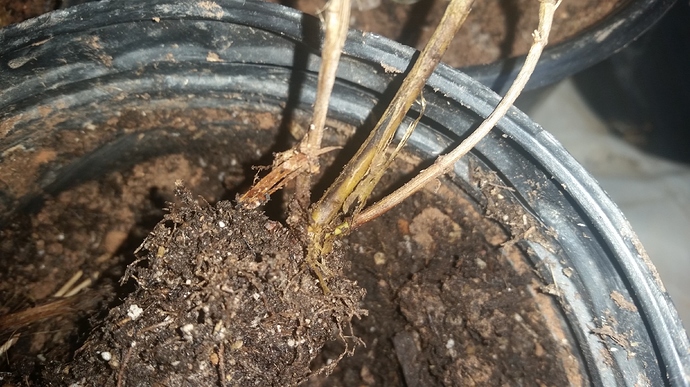 pic of the the first Boreal Blizzard that I sent to Bernis before she sent a replacement. tops were dead, and wet green under sloshy bark near base. Bernis suggested that I keep it around & it might still grow, which I did. Anyone recognize its symptoms?

and picture of it now, after the tug test the other day: 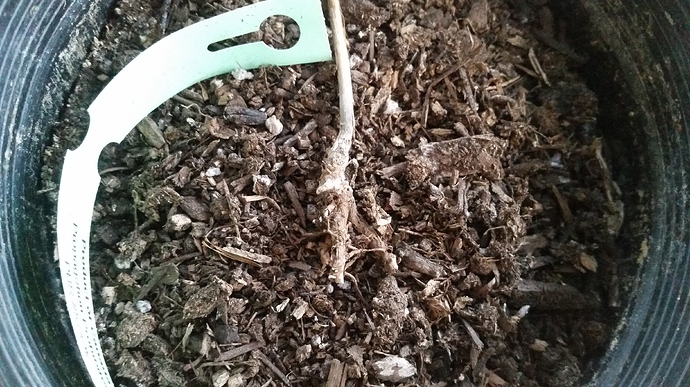 they are both z2 hardy plants so i doubt cold was a issue. maybe some kind of root disease that weakened them ? all my plants i got from them were pretty small but took right off within a few weeks of being put out in average soil. they are both pretty vigorous growers. 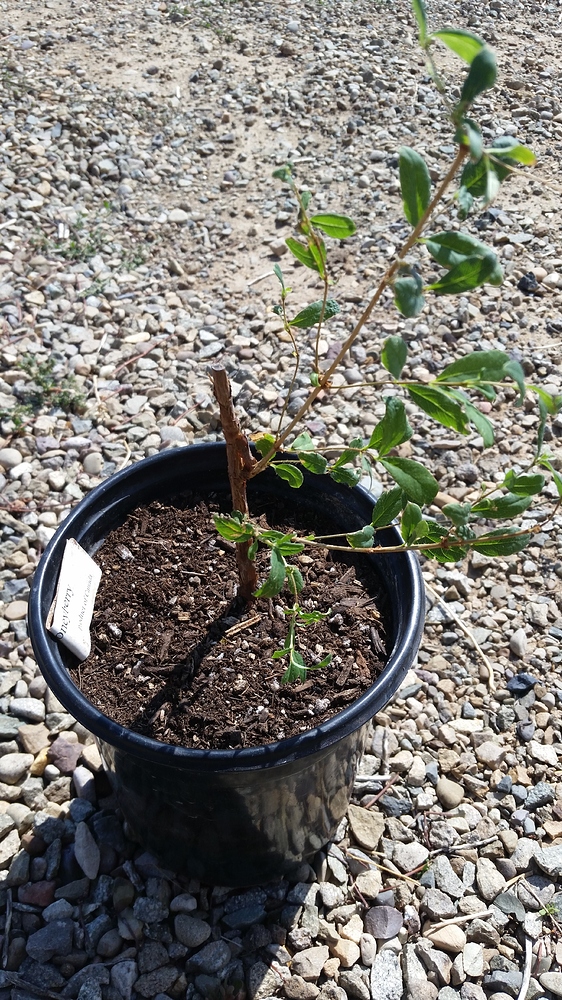 Kawaii; started growing well-after the UoS varieties, but then really took off - it arrived as the single stick in the picture, no branches, and stopped growing after ~6" of growth off of its two buds. The UoS varieties seemed more focused on flowering, including Beast#2 - which came fully flowering. Is this about a normal amount of growth for a haskap’s first year?

Apart from UoS varieties not liking dry winds (to the extreme of dying, though…?), the only other thing that I can think of now, is that the first Boreal Beast might have had some disease, as @moose71 surmised, and gnats/flies then transferred it to the others; but Kawaii was with the UoS varieties, & unaffected, making that seems unlikely. Unless, disease carriers (insects? birds?? other???) didn’t land on Kawaii, because it was the only haskap without any leaves at the time? Romeo was separate from the others. So, Kawaii is the enigma…

Hello just to share my experience in denver. I have Borealis, Aurora, Tundra, Berry Blue, Indigo treat, Blue Sea, Blue Hokkaido, Keiko, Kawaii, Blue Mist, and Blue Pagoda all except for the Blues were bought in 2x2 plugs. They’ve done well in Denver. They survived all last year and all have come back this year and have good growth and are flowering, except for three no flowers. They got regular water 1 gallon plus every two to three days through drip irrigation. All last year got regular feeding of liquid fertilizer. Never defoliated last year but did look a little sun burned. This year the three with no flowers came back from the ground not from previous growth don’t know why. This is the second leaf in the ground for my these plants.