I have a couple eight year old G30 apple trees with dozens of vertical shoots two to three feet long that are taller than I want the tree to get and block air flow/sun penetration. I understand if I prune them back to 3, 4 or 5 leaves/buds that encourages fruit spurs to form.

Question: do I need to prune them back repeatedly to get the fruit spur result or is just once about now enough?

Hi Hambone. My thought is that if they are that long it might be better to bend them to the horizontal (I use green nursery tape and it seems gentle on the bark) and then prune the buds on the branches to three leaves. At least, that’s the approach I’m taking, and I think it’s working. I’ll know in the spring.

My understanding is that you can cut those verticals back but they will pop up again several times, and I’ll bet that the bigger they are when you start the more times you’ll have to revisit them.

The more experienced hands may correct me, so wait for them!

Thanks Mark- that sounds good. Have never used or seen nursery tape but it sounds handy to have. Trying my best to avoid ladder work.

I agree with avoiding ladder work but there is much to recommend ‘bending’ as Mark mentioned. I did the bending process to my apples a few days ago. I’ll post a before and after photo tomorrow.

So these are the apples ‘before’. The top line on the trellis is the highest that I can reach. 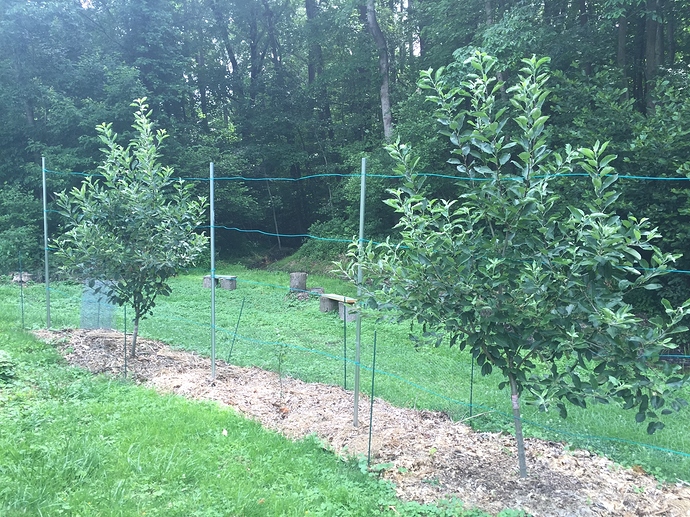 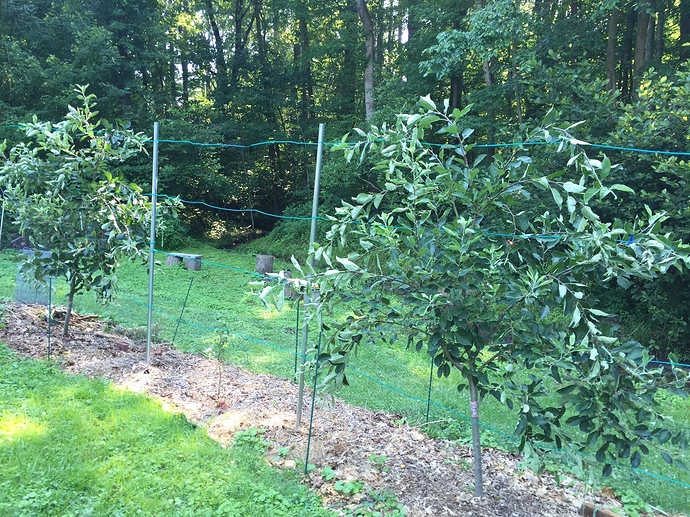 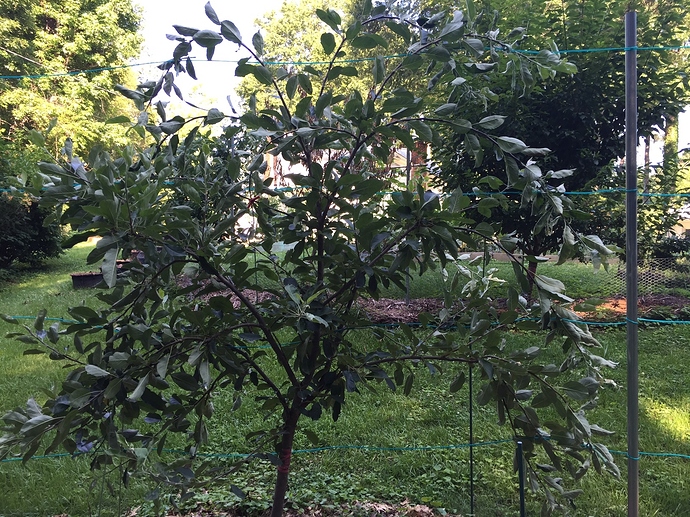 IMG_1132-2.JPG1632×1224 1.12 MB
It is my ‘weeping’ apple. The top growth only extended maybe 2’ above the top line so the apples were kinda easy. Here is the ‘after’ Burdundy Plum (weeping) Its top growth had extended 6’ over the top line. Not all the limbs were bent as these will be pruned in dormancy. 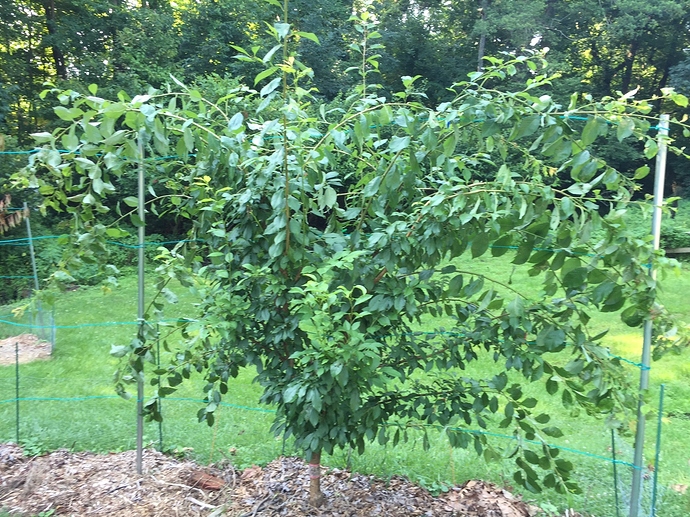 As I perused the examples of those doing this in high density orchards, etc. The goal did not seem to get the limb horizontal, as in an espalier, but rather to get the distal segment of the branch pointing downwards. This is accomplished by keeping the natural angle of the proximal end limb and gracefully ‘weeping’ the branch and securing it. I only needed 1 brick for each apple tree to secure some limbs and the trellis did the rest.

BYOC pruning didn’t work for me. I want to intentionally define a fruiting ‘space’ or wall. I see these advantages of a trellis.
It defines the space in which fruit will be borne. This has advantages for more easily finding and protecting the fruit, efficiently applying sprays and harvesting the fruit. The compact nature of the fruiting wall allows easy application of fruit protection systems like bird/insect netting since the support is already in place. The structure also allows frost coverings to be applied quickly.
The trellis facilitates the limb bending process.
It stabilizes the limbs against wind (which apparently MANY people on this forum experience), especially when fruit is on the tree, and, can stabilize any Y crotches that have formed.
The trellis wires can support heavy distally borne fruit load - a characteristic of some varieties.
Pruning decisions are simplified because the space in which fruit will be borne is predetermined by the grower and is reduced from three dimensions (open vase w/pendulous limbs) to a fat 2 dimensional space. Pruning can still be done to achieve high light interception without creating dense areas in the canopy.
Maybe we can call this Trellised BYOC.

I’m sure you’ve seen the nursery tape that @marknmt is referencing — it’s the standard plastic stretchy semi-translucent green tape that comes in a big roll – available at Home Depot. Nearly every small staked tree you buy is taped w/ the stuff.

Do you have deer? Do they bother the trellised trees much?

I would have liked to do something like this, but I’m reasonably certain that I would have zero branches between 0 and 4 1/2 feet.

Hey Drew,
We do have deer but I have not had to battle them for anything yet. It is hard to see in the photos but I use 2’ high 1" chicken wire around the beds and just sheet compost inside them. The bird netting comes down to the chicken wire. I have electrical wire to deploy if they become more of a threat. I also have 7 grandkids (all local who love grandmom’s garden & fruit) so I’m reluctant to use it unless I’m comfortable with a system that they won’t accidentally get ‘bit’ by it.

Count yourself lucky Anne! The deer do lots of pruning to short branches for me, but I am not having the benefit of spur formation. Based on my observations there it seems like the buds under the “pruning cut” will leaf back out even into September and October. Are you supposed to keep pinching those shoots out as they form?

You may have to do some thinning out of limbs that are shading the ones below them. Also, never cut a branch back; remove it completely at the trunk.

The horizontal bending will indeed limit the vigor, and encouraging it to bear heavily is your next strategy. Limit the nitrogen it gets and increase the phosphorus.

Hambone, while I am nowhere near an expert pruner, I do know that you should not partially prune back the water sprouts (pencils). Either remove them completely or leave the least vigorous ones. Hman/Alan should weigh in on this, but he schooled me a lot on this, along with his references to articles by Bas van den Ende. Here is one to get you started:

Editor's note:This story was updated in 2020 — Good to Know: The 1-2-3 rule for renewal pruningTwo-year-old wood and young spurs produce the most and best Packham pears.The largest and best quality apples and

You are trying to develop spurs/fruit buds, not branches. I have made every pruning mistake known, so I have learned this from experience. Delayed pruning (summer pruning) is most helpful in reducing the vigor of trees. It can stop that frustrating cycle of prune/huge flush next season/prune/huge flush…etc.

Good luck and keep us posted.

Also, never cut a branch back; remove it completely at the trunk.

There must be many schools of pruning. One I recall from this forum is to summer prune to three or four buds to generate fruit spurs. If I bend all of the verticals the top of the tree will be very congested. Will bend some, thin some, and experiment with cutting a few back to four buds or so. When I see photos of apple pruned by pros I never see heading cuts.

There must be many schools of pruning.

Oh my! It sure looks that way. But 3 factors helped me sort it out…to some degree.

(1) The age of the tree. (2) The characteristics of the individual tree (vigor and/or the variety). (3) The intention of the grower.[quote=“hambone, post:12, topic:6431”]
experiment with cutting a few back to four buds or so.
[/quote]

My favorite part of growing stuff - find out what works by experimentation.

The deer do lots of pruning to short branches for me,

I know this is off topic but I’m curious if you have heard if bird netting discourages deer grazing? I understand that if they have found food they will continue to come for more at the same spot. Not sure if this will frustrate them enough to move elsewhere.

I know this is off topic but I’m curious if you have heard if bird netting discourages deer grazing?

I think only if either the branches don’t stick out or they can’t get to the food by pressing their nose (and hooves) against the netting. They often will kick my too-close-to-the-tree fence in some, presumably from propping their front legs on it, to get to higher and deeper in branches.

I agree with you- many schools of pruning.

The strategy in bending over watershoots (which are by definition vertical) be a couple or three different things. In one approach it will be used to graft a new variety which will eventually replace the branch from which it springs. In another approach it is encouraged to form spurs by cutting it way back. But vertical wood will, if left to its own devices, by and large stay vertical a long time and won’t have much fruiting potential. And when you have too many it makes sense to take out the excess. And if you want to try to convert the verticals to spurs start when they are still quite small, as in just a couple of inches long. But they will often be poorly located to be fruiting wood and you might as well take them out if you can’t use them bent over.

I think of pencils -the ones we count on to carry fruit- of more on the horizontal axis and if they point down or up they will usually come out. But a short branch on top of a larger limb might spur up and produce fruit and one might want to leave some of those.

All my comments are based on my own experience and my own imperfect reading of others and are always subject to correction. In fact, I encourage it as I learn so much from it!
__

As a postscript to the above ‘bending’ efforts to promote fruiting and attenuate vigor…,some folks here cautioned that waiting this long (after the solstice) to apply such techniques would result in breakage. I have not found that to be the case IF the limbs are arched as described above and elsewhere. Today I began working on the uber vigorous Sweet Treat and limbs that were 3/4" yielded to being arched with the only goal being to get the tip pointed downward - that is, not to attempt to bend the 3/4" part of the branch. After 2 summers of failed BYOC ‘size control’ pruning on this tree I’m encouraged.

Two postscrips to this thread.
After most limbs of the Sweet Treat were pointed downward and tied to the trellis, the remaining ones that were still upright (and scheduled to be winter pruned) retaliated with a crazy flush of new growth that looks like a tree on top of a tree. Looks funny.
Also, another side effect of the bending was Japanese beetle confusion. Typically they like to hover around the top of the tree where the new tender growth is, er…was.

The second postscript has to do with bird netting and deer. This morning the bird netting over the blackberries looked disheveled near the top with some of the wire supports bent and pushed out of place. Under the netting some branches were broken and some ripe blackberries had fallen to the ground. BUT there were no chewed limbs, nor was the netting torn. I’m thinking it was a deer attack. Nothing else in the garden/orchard was bothered.

Hey Steve, I was going over this forum looking for apple pruning advice and found this thread. Did you have any luck turning the water shoots into fruiting spurs?

I’m having the hardest time figuring out my Johnafree semi dwarf tree. Planted 2015, had about 15 apples last season, and this season is only now starting to flower. It seems to only flower from the tip of the water sprouts. I want to summer prune these long branches down to 3-5 leaves, but that would eliminate all the apples this year. I can try and get a picture up if that helps.

No- not much luck with that so far, maybe take another year.