Note exactly a fruit or nut plant, but I guess sunflowers are close enough.

I need to arrange something for my maypop to climb so it won’t sprawl all over the ground this year. I was going to just drive some stakes, but then I thought that sunflowers could easily grow to the right height.

Does anybody have a suggestion as to a sturdy sunflower variety that could tolerate heavy clay soils?

I grow Mammoth Grey Striped sunflowers the stalks get very big and grow fairly tall. I have both white seeded ones with grey stripes and another variety that has black seeded ones with white stripes. They both get about the same size. The white ones with grey stripes might get a bigger flower head but other than that the stalks are the same. I save the seeds from year to year and have grown these varieties for several years. I grow a few different sunflowers besides these as well.

Sunzilla sunflowers are also another large variety. I have never grown them but they grow very tall from what I have read.

I second the Mammoth Grey Striped sunflowers. They grow tall and very sturdy.

I grow both Mammoth and Mongolian. They both are very tall 8~10’. They are to too tall to reach the flower head. I have never been able to harvest any sunflower seeds. Birds and squirrels, (don’t known exactly who did it) got the seeds first and left pile of empty shells underneath. Mammoth seeds are easy to find in the big box stores. Mongolian seeds need to be ordered from online.

I had luck with Kong and Mongolian Giant. 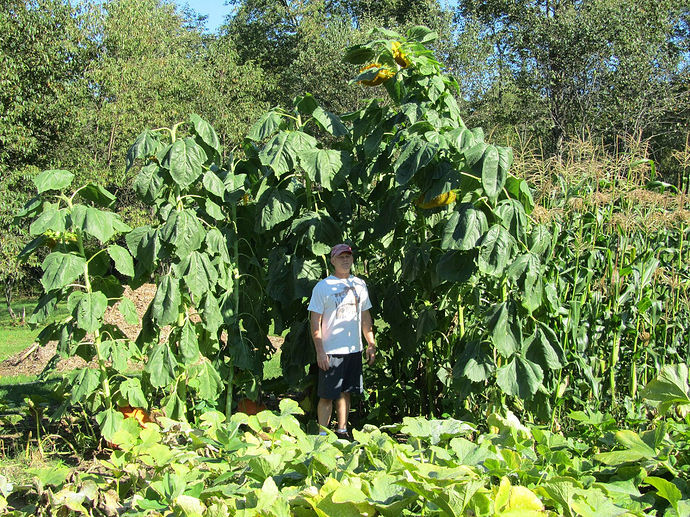 Here is a pic of the 2 Big sunflowers that I grow. Seeds look quite different but both produce big stalks and flowers. The Grey Mammoth is the seeds on the right. 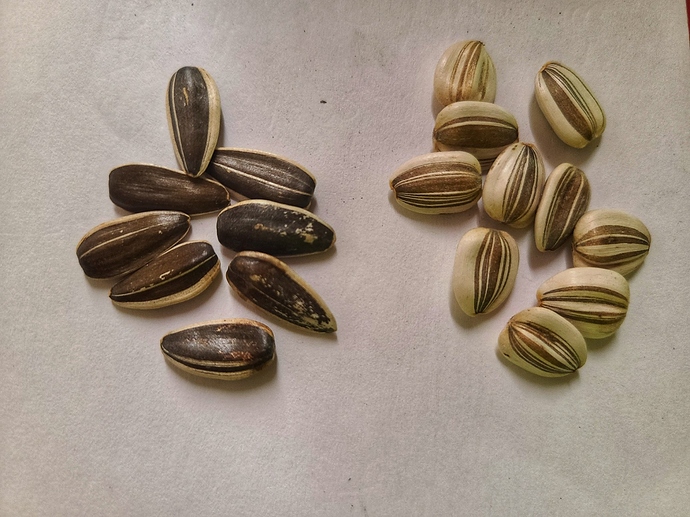 Which one is which?

I think this was 2016 and it was just one variety, Kong. I’m not sure of that though.

If you are referring to mine. I have only ate the seeds of the Mammoth Grey ones. They are very good and when piled, salted amd toasted up they are really good! I need to try the black ones this year perhaps. I usually just grow them to look at and save seeds though

Annie,
It was on my Mammoth sunflower that I witnessed for the first time that a groundhog could climb a tree. It shimmied up to the flower/seeds. I could not believe my eyes. Wish I had a camera in hand.

Thanks Philip. I grow sunflowers for the seeds. I searched that the Mongolian has the largest seeds. I did grow mammoth too. But I end up with none ever year. In the past, I tried to wrap the flower head standing on a ladder with a plastic bag but that was still fighting for a losing battle. Only one time, I got a head still had half of the seeds left (God mercy! ). I chopped the flower head down and dried the seeds under the sun. By the time I went outside to take the seeds. They were all gone.

Wow, unbelievable!! Groundhog can climb! This really adds another dimensions in knowledge of destructive garden animals. Tippy, Thanks for sharing this.
If I saw it, I might have mistaken it as a koala bear hug on a tree stock😀

As soon as they droop over after blooming amd the seeds are ripe, I cut them. I usually just keep the head as is and leave it in my garage until next year to dry out. I usually plant several and let the birds and squirrels fight over them after I have gathered the largest flower heads.

Does anyone know if deer eat sunflowers? Would they rebound if they do?

Yes they will and typically not.

They have chomped on mine over the years and as @TurkeyCreekTrees said, they usually don’t rebound. I always plant several and hope that the deer don’t get all of them. Some years they go untouched though

Have you considered a perennial sunflower for something that wouldn’t need to be replanted every year?

Cons:
*smaller flowers
*seeds too small to be worth eating (still great for bird food)

Considerations: pick something clumping since some selections can spread aggressively.