Sweet lent persimmon,; Is a small ,seedless , late variety.
will hang on the tree till January here in Wv.
Turn in to seedless raisins,in December .
Birds usually (and /or me ) finish them off in January .
Not the best , but in its season their is nothing else here to compare it too.
Except wild seedy ones.
Still astringent now (at thanksgiving ) this year, wich seams late.
I remember eating them ,earlier befor
It is a heavy Bering variety,
Precocious
And each year heavy
Seems immune to fruit fly.
It’s fun to eat fruit off of trees in December ,January in Wv.

Where did you get it? I really need to get a persimmon tree of some kind going.

Got mine from Cliff…at England’s orchard and nursery Ky.
( hi Cliff , thanks )
Not saying like this is the best persimmon in the world.
There are a lot of good persimmons varietys out there.
This one is noteworthy in its season for what it is .

I’ve been thinking I’d like some really late persimmons. Most persimmons ripen late August through September here. I got just a few fruits from Ruby for the first time this year. They were excellent quality and later than most others but ripened around early October, if I remember correctly. What are the best fresh eating varieties (of native persimmons) that could be harvested in zone 7 NC in November or later? Sweet lent sounds interesting. Thanks for mentioning it.

Clifford England and or jerry Lehman could answer that question better than I.
All of my other varietys are done for the season,
That is why I mentioned Sweet lent as note worthy .still food out there !
They probably have much better late varietys.
Let us know what you come up with. I too want more varietys

As of yesterday , , I still had a lot of sweet lent on the tree here in WV.
And as I said above they are nice seedless raisins this time of year.
This morning the birds decided it was time.
In about 2 hrs. They ate them all.
What other varietys hang that long ? Anyone have any ?

I have enough scion wood for everybody , so if you want some… P.M. Me

Who has good late persimmon varietys.?
What are your latest varietys ?

I need to get some rootstock going first, I need to find some stratified seed. Maybe need to make a trip to the neighbors old loft barn this weekend , probably some there already stratified

Dave, I don’t know if you’ve seen my interest list, but I’ve collected a list of supposedly late native persimmons: Craggs, Deer Candy, 100-29 Deer Magnet, Janet, Miller, Kitch, (and your Sweet Lent)
I’m not sure, but I believe Kitch is another variety like Sweet Lent that makes something like raisins on the tree. Anyone on this forum growing any of these and been fruiting them?

Thanks for the list, now if we can just find scions .
And more important ,a good report from someone who grows them.

who has good late persimmons ?_

Thanks for sharing your experince. Sweet lent sounds great for wildlife plantings.

Yes ,I think so,it looks like the best food above snow line in mid January !
I was not at all upset the birds ate them, I had my chance ,
What amazes me is that they wait so long to eat them, as they have been hanging there ripe for months , maybe just saving them for hard times ?
Which it has been here, snow cover and single digets for weeks
Like clock work .mid January they finish them.
I have several trees of them, but am considering a larger planting for a winter food source.

Hey @cousinfloyd, any updates on the late persimmons?

I think all I have to add since I first asked is this response from Jerry Lehman:

I am the originator of Deer Magnet and Deer Candy. Deer Candy is mid to late season excellent fruit for both deer and human. Here in Indiana it drops the fruit from October into November. The problem with most very late ripening virginiana varieties is they retain their fruit rather than dropping it, much to the joy of birds. Deer Magnet typically holds its fruit then drops it around December 1. Rosseyanka (Russian Beauty) for example here in central Indiana holds its fruit until December 1, slowly ripens it but drops only a few. You should see the starlings in that tree in December. The downfall of Deer Magnet for human use is the small size and large number of seeds, but the deer don’t care. Early Jewel (Claypool’s CV H-118) Deer Candy (CV WS19-10) and Deer Magnet (CV 100-29N) are recommended for deer hunters who want to plant trees near their deer stands to attract deer. Early Jewel begins dropping its fruit September 1, Deer Candy begins dropping October 1 through November and Deer Magnet extends the fruit drop period Into December. These are averages here in central Indiana and depending upon summer weather conditions can vary as much as 2 weeks. The picture was taken February 2015 under the Deer Magnet ortet where the deer were still coming back and pawing to find fruit. They were not pawing under any other trees. All 3 can be purchased from Cliff England nursery.

I suspect Deer Candy may not be much if any later than Ruby, my first taste of which last year impressed me very much, particularly in terms of taste, including a complete lack of astringency even from fruit picked off the tree when soft, and pulp-to-seed ratio. The same tree is loaded (probably 100+ fruits) now in its second year of bearing and only about its 3rd or 4th growing season since I grafted it.

Here’s a photo from last year. I might have shared this photo before: 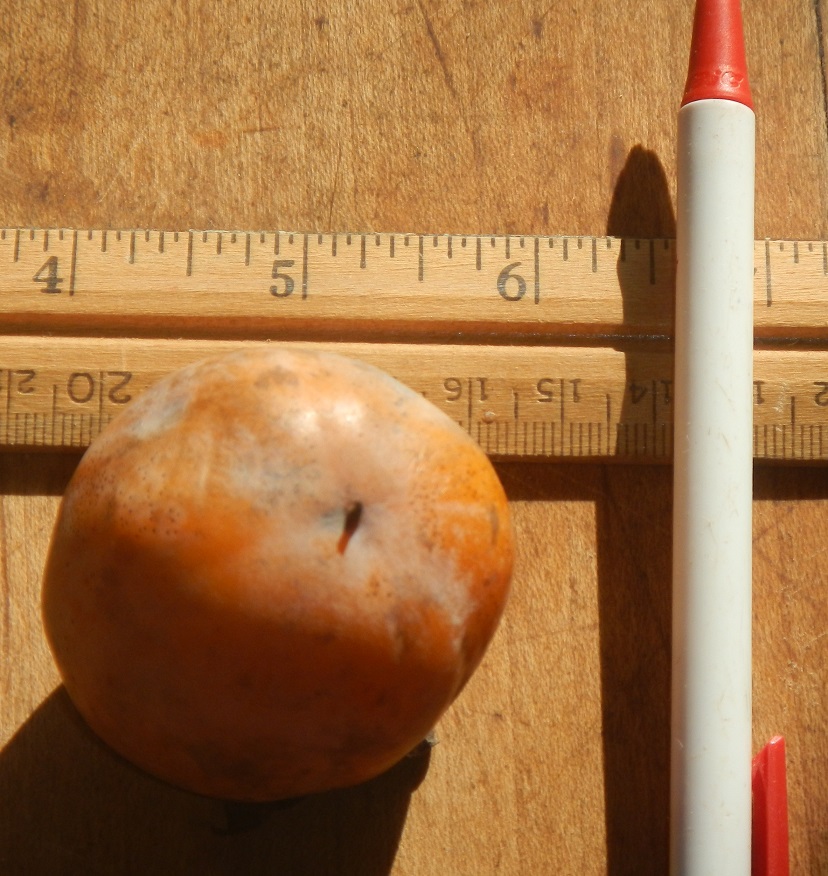 At NAFEX Cliff E. Said he did not remember the sweet lent variety.
I got it from him many years ago.
So he may not be a source.
I do have a lot of scion wood for trade.

Jerry L…said a 90 chromosome variety planted where there are only 60 chromosome trees will be seedless. ( and vis versa)
I have 60 chro. Wild trees here
But many 90 chro. Planted , may not have a 90 chro. Male
Point being, this sweet lent may not be seedless in other areas ?

So update on sweet lent .
I have grafted several , and planted in seveveral different areas on the farm .
Normally it has been seedless here, but this year , some sweet lent trees close to a garetson had seeds in them.
Garetson , I believe , has been known to have male flowers.
And garrettson had some seeds in it as well this year.
First time.
So …I am thinking sweet lent may be a 90 chromosome strain.
And garettson as well.?
Lent has been seedless here for many years, despite many 60 chromosome males near by.
But this year it, as well as garettson had seeds.
Sweet lent was still seedless this year here on trees far away ( 1/4 mile)from garettson.
The only value of sweet lent is that it’s seedless, and stays on the tree til January.
So if you have 90 chromosome male flowers, it may not be worth having sweet lent.