I planted less than a month ago and they are already growing pretty big. Much faster than normal potatoes, which you can see in the distance in the pic.

These were planted in the raised bed which I’ve tortured strawberries in for several years. Strawberries weren’t happy, but the weeds loved it. So, I decided to do something else with it. I probably could have made a go of the strawberries by watering more and weeding regularly, but it is at the far end of the yard and not so convenient. Funny enough, some of the strawberries escaped the bed (like a sinking ship) and are growing happily in the pathway (with some almost ripe berries).

Those look great @BobVance. You might have mentioned them earlier, but what variety are those?

Our Beauregard’s are doing very well also, after I put up my tape/fishing line fence to keep the deer at bay. That gave them a chance long enough to get sprawling. But now they’re spreading out beyond the fence, so it looks like I’ll have to expand that out.

We tried to grow them a couple years ago, but didn’t protect them, so the deer would always reduce them down to nubs, so they could never get going.

Our 200+ regular potato hills died off a few weeks ago, which seemed way too early, but we have been harvesting a few decent sized tubers. Still don’t know why they didn’t last that long, but we did have a freeze in the middle of May, right when they started blooming, plus it was pretty cool and wet in April and May. So, that couldn’t have helped.

You might have mentioned them earlier, but what variety are those?

I didn’t mention it, but only because I don’t know. They are the leftovers from a purple variety I bought in a store. Here is the pic from planting, which has the bag. At the time of planting, the eyes were over 6" long and had started to develop leaves. I cut each of the two sweet potatoes in half, so each had several eyes.

Planting on July 8th is probably very late. But, I could still get 110-115 days before the frost, which could be enough. The only other time I planted sweet potatoes (also from grocery store) was on 7/12/2010, and I got a decent yield from them (first frost around Halloween). That time, I planted a single potato (cut in 2) and the harvest covered a full cookie tray.

Our 200+ regular potato hills died off a few weeks ago, which seemed way too early, but we have been harvesting a few decent sized tubers. Still don’t know why they didn’t last that long, but we did have a freeze in the middle of May, right when they started blooming, plus it was pretty cool and wet in April and May. So, that couldn’t have helped.

Most of my regular potatoes (mostly purples, with a few blue, yellow, and fingerlings) are still going strong. But, I started much later, planting around the end of May and into early June.

@BobVance,
You grow a lot of diversity and do it very well! How many pear & apple varieties are you currently growing? I was surprised to hear you were growing so many interesting potatoes.

You grow a lot of diversity and do it very well!

Lots of diversity, but not particularly well. I was just thinking the other day that I need to have a better spray regiment next year- maybe go with a non-organic insecticide. I also need to get going with the traps, as what survives the insects gets eaten. I was just looking at a grape vine which has half as much as it did a few days ago and appears to be at the same stage of ripeness (just a few turning ripe), as all the ripe ones were eaten. I do potatoes OK, as they are very easy

How many pear & apple varieties are you currently growing?

For apples, I’ve bought maybe 40 varieties and grafted another 70-80. But I recently lost a big multi-graft, so that may knock the numbers down by ~10. So, maybe 100 varieties are growing, of which I’ve harvested maybe 20.

For pears, just 13 purchased and 29 grafted, including Asian pears (about 1/3 of both totals). Pears take a while, so most of the ones I’ve sampled are the Asians, though I have had 1-2 of several of the Euros (not necessarily good samples).

Looks like something likes sweet potato leaves. I’ve got a yard full of normal potatoes (as normal as purple, blue, yellow, and fingerlings get) and nothing has eaten any of their leaves (a few potatoes have had bites taken). But, 4 sweet potato plants and they get devoured. 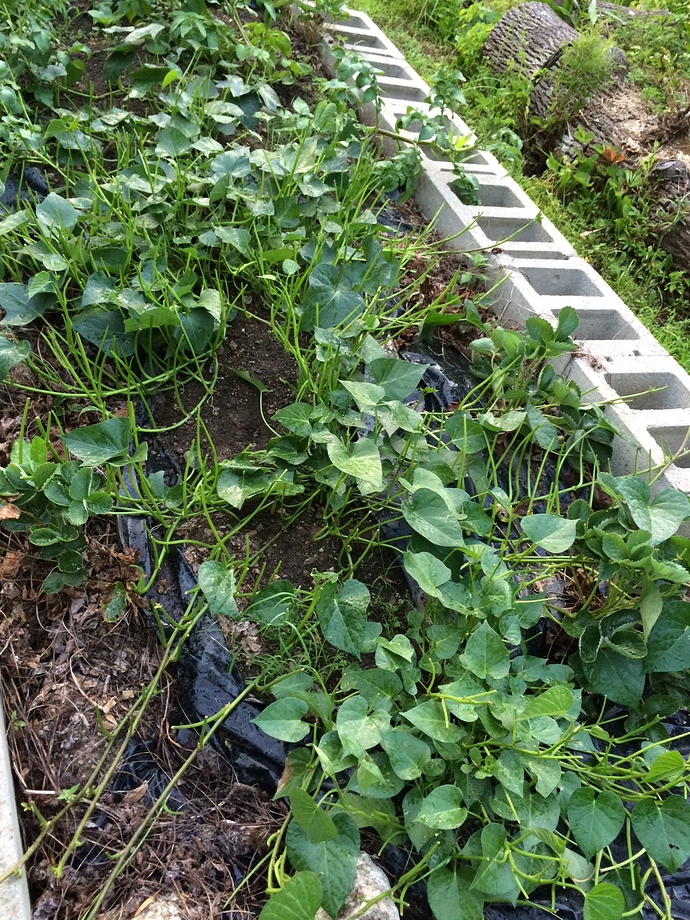 That’s a nice fence he made. I bet it would have stopped a rabbit- it’s what I’m guessing ate mine. I’m surprised that they (sweet potatoes, not rabbits) grow so well for him- it doesn’t look like much sun gets through the canopy.

Muddy,
Rooting those in water worked out fine. We will dig the harvest before cold weather hits. I dug around a plant today to check the progress.

Looks great Clark. What variety is that one? I was down in our sweet tater patch a couple weeks ago, and curiosity got the best of me, so I scraped away some soil away from the central root and saw a tater in there! Very exciting. I told my wife and she said she had just done the same thing.

@MuddyMess_8a, how long do we need to leave these in the ground? Until the first frost, or maybe just after? The leaves still look somewhat green, but don’t think they are ready just yet.

We will wait until a frost as well but before the cold weather hits in November. My mom grew these from super market sweet potatoes so it’s anyone’s guess what variety they are.

It’s okay to wait for a frost if the temperature in the area of the tubers stays above 60F. Never allow sweet potatoes to get below 55 degrees, even in storage. It damages them, and can cause rot.

Once dug, they’re not yet ready to eat. They need to cure in order for the sugars and flavors to develop, and in order to toughen the skins and prevent rot and mold. They cure for 4-7 days at around 85 degrees with high humidity - around 90% humidity is preferred. Most of us can’t provide those exact conditions. So, do what you can to approach the optimum.

Store at 55-60 degrees with about 60% humidity. You might be able to approach that with a basement or root cellar.

@MuddyMess_8a,
Starting to harvest some potatoes. Fall rains are here a bit early and from experience we know they can split our potatoes. Wanted to follow up with you and let you know we had excellent results! My mom got an assortment of potatoes and we learned some great new tricks this year. I don’t see us buying slips again unless we want a particular variety! Thank you for the great advice! 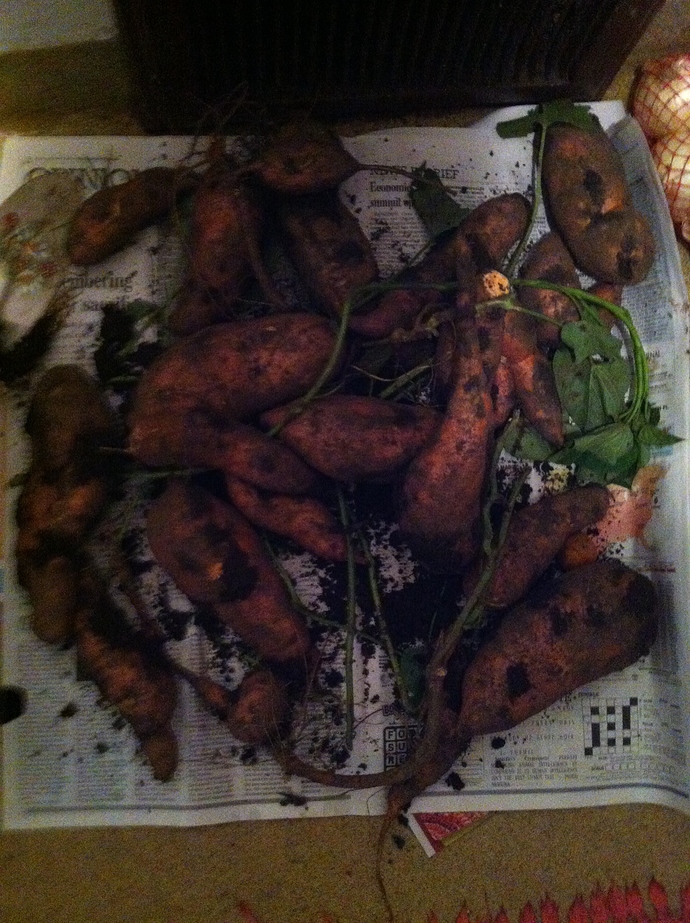 Sweet potatoes are mostly out of the ground now! Wanted to post a few last pictures. There are some 50 degree nights coming up. 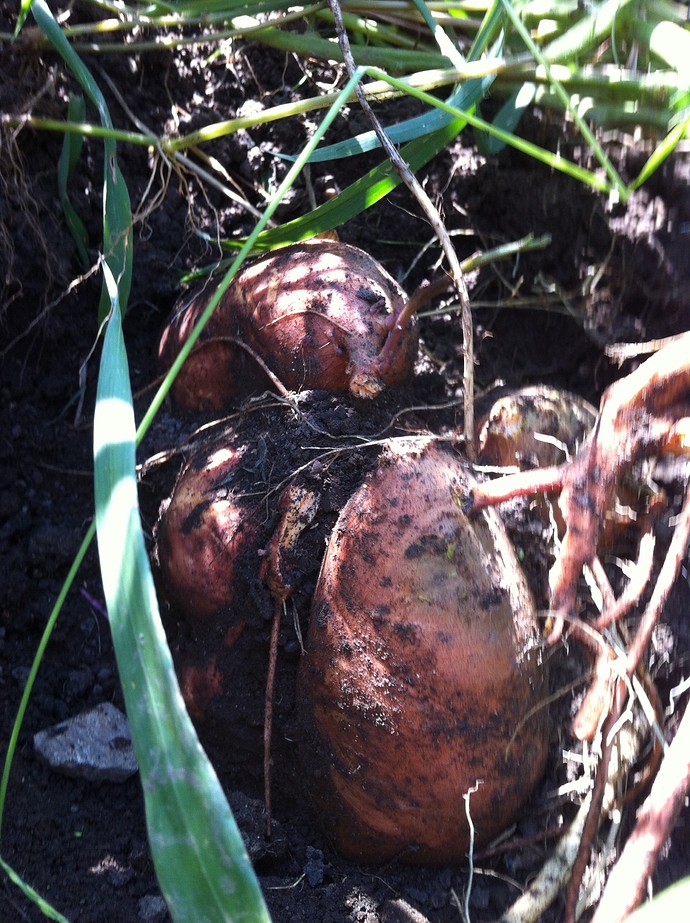 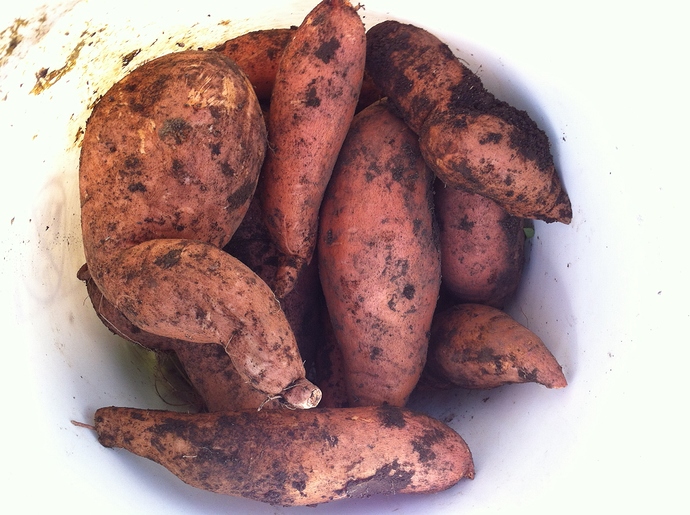 There are some 50 degree nights coming up.

Will a 50 degree night hurt them? I figured that I would let mine grow for as long as possible- maybe right up to the frost in another month or so (maybe a bit more, often around Halloween).

It’s okay to wait for a frost if the temperature in the area of the tubers stays above 60F. Never allow sweet potatoes to get below 55 degrees, even in storage. It damages them, and can cause rot.

Yes I’ve been rushing to get them out of the ground even though we are in the 90’s right now. Muddy has been right about everything else on the sweet potatoes so I know she is right about those temperatures.I left them in the ground to late one year and we could not store those potatoes but we did still eat them.

My wife’s curiosity got the best of her seeing all those sweet tater vines. I think we planted 17 slips, and maybe 15 did well. Anyway, she dug up the first hill and got some monster sized tubers, and before we were done, we had dug up maybe 6 hills. Beautiful garnet colored taters, most of them ‘normal’ looking, but some were quite contorted.

They filled up a 5 gallon bucket, and we weighed them in at about 25 pounds. The variety is Beauregard from Bonnie Plants, I think we got them at Lowe’s.

We’ll dig the rest up next week as it’s supposed to drop down in the 50’s. I’ll pass some pics along soon.

OK, here are some pics of them spread out on the kitchen floor. I’ve since put them in a shallow box, and put them in the sunroom porch of the old house. It gets pretty warm in there, but it’s prob not humid enough, but it’ll have to do for now.

We’ll dig the rest up next week as it’s supposed to drop down in the 50’s.

I believe what @MuddyMess_8a was referring to is the ground temp - there’s a dif. Do you have a ground thermometer?
Also a good rule-of-thumb for harvesting is that you will get between 4-5# per slip. Once you figure how many pounds of sweet potatoes you will eat in a year, you can back figure how many slips to start for next spring.

Subdood,
Nice looking potatoes!
Anne,
I agree 4-5 pounds is about what we averaged.