I saw sweet potato plants at a clearance sale, so picked one up. After rereading this thread, I guess I should put some rock or silo staves by it to warm it. The weather has been cool since I planted it, not even reaching 70s on some days. It will be a fun experiment to see how the lonely little plant does.

Here is a picture of my sweet potato barrel. I’m in Michigan so they don’t grow as fast here but they are growing. I got my first flower today too. 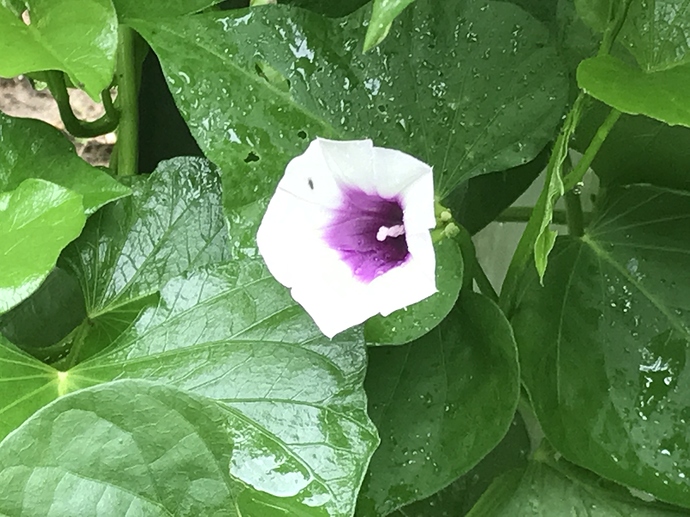 Saw the following post on a VA gardening blog I follow. Lots of info on curing and storage that may be helpful to others.

Here are some of the potatoes I grew this year, Nancy Hall in the back (4th) row, Red Japanese in the next (3rd row), purple/blue fleshed and one of the white varieties I can’t figure out after the fact in the 2nd row, and Covingtons in the 1st (nearest) row. After pulling the vines off and plowing them out with a potato plow/middle buster, we gather them into rows (which is when the photo was taken) before picking them up.

that’s a nice haul…it always amazes when I see dirt from other parts of the country and how different it looks…our soil down here is so sandy and wet by comparison…can’t wait to see if I get any this year. planning to leave mine in the ground for another couple weeks.

I actually have other garden spots with lighter soils where I could grow the potatoes, but we started noticing that the potatoes grown in the heavier red clay had the best flavor, and then we did a blind taste test to confirm that suspicion and multiple taste testers comparing samples of 5 varieties grown in each of the two different soil types all thought the potatoes grown in the red clay tasted better (or at least equally good) in the case of each of the 5 varieties. It might not be the soil type but maybe nutrient levels or pH level or some other factor that also differs between the two gardens, but whatever the cause that’s where we grow almost all our sweet potatoes now.

Planted these in between 2 pieces of fabric. The vines spread out over the fabric ,no weeds ,trouble free, except digging out of that red clay. 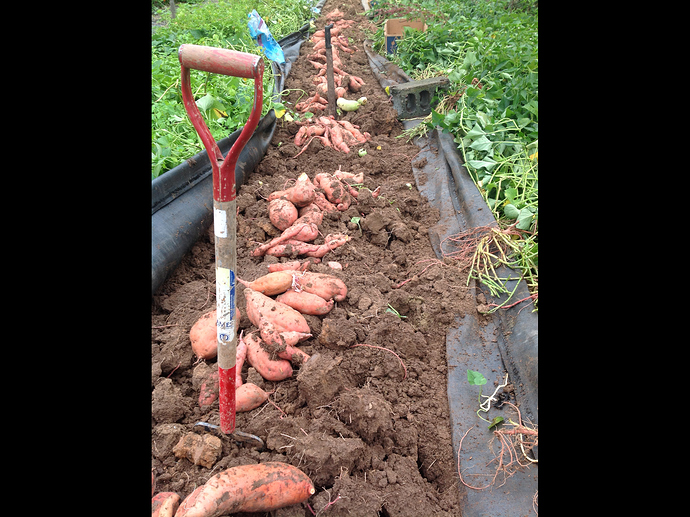 Decided to dig mine up yesterday, much to the dismay of my wife as we were just getting ready to leave for dinner at the in-laws…Got most of them, but I think there are still more in the ground that I missed. Anyway, the leaves finally started wilt so I figured it was time. Probably got around 10 lbs and some decent size ones too. Not a bad take for my first time. I didn’t pay attention to when I planted these, but next year I’m going to get them in the ground as early as possible. 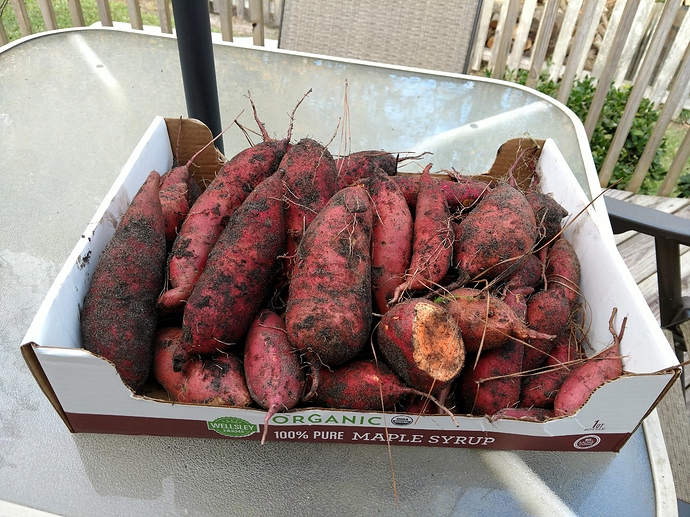 Varieties that were another notch lower (mostly not disliked, but scored below average):
Bonita
Gem
Carolina Ruby
Beauregard
Covington

To update my earlier post, in last year’s taste tests, Bonita was, quite surprisingly, the highest scoring sweet potato of all. It had the most 1st place votes, and the few people that didn’t rank it 1st (of about 20 varieties) ranked it very close to 1st. It was really outstanding! However, as I noted above it was definitely not at all outstanding the year before. I’m still trying to figure out why it would be so different from year to year. I plan to do this year’s carefully controlled side-by-side taste test within the next couple weeks.

Gem, another variety with which I don’t have as many years of experience, has also risen in the taste tests. It wasn’t up to the level of Nancy Hall or Porto Rico or last year’s Bonita or Red Japanese or White Triumph…, but it was quite good, probably the best of the common modern supermarket colored varieties, without the awful (as a baked potato) baby food texture and with an interesting, slightly unusual flavor for a sweet potato that made me think of butternut squash. It definitely stood out well above Beauregard and Covington and Carolina Ruby, and the ones I’ve eaten this year seem pretty good, too. And it was an exceptionally pretty, bright orange color.

This year the drought will have some impact on our sweet potatoes which I will document soon. The plants are very small so my harvest will be smaller also.

at least you can harvest and eat the leaves.

I just received slips from georges plant farm. The bed i want to plant them in has green beans growing for the next couple of months. Whats the chances the slips survive in a glass of water, with weekly water changes, until early june?

Probably close to 100% chance of survival as long as you’re giving them good sunlight. I start my slip potatoes with one end in the water and then cut the slips off when they’re 12+ inches and just stick the end in the water beside the potato as I wait for more to grow. They root out and grow just fine and when they reach about 18" or so I cut a foot off that and put that in the water, leaving 6" or so of the original slip to grow out. The first year I did it I had 20+ slips growing in water by the time it was warm enough to plant, at least half of which were just from the ends cut off of those already growing in the water.

So, if anything, you’ll need more space to grow all the slips you’ll have by June… or give the extras to friends and neighbors.

Great, thanks. I did the minimum order so some propagation would be perfect because i need a few more to fill the space. Do you give any ferts?

Do you give any ferts?

Not directly, but I often use water from my fish tanks for seedlings and starting slips, so some dilute nutrients from the fish waste I guess. I’m sure adding a little very dilute liquid fertilizer would be appreciated, but I’d do it very dilute (1/4 or less). Or just wait and see how they look and only add it if they’re looking a little weak.

Appreciate all the information contained in this thread. Preparing to start my first ever batch of sweet potatoes. Should have them in jars of water by next week. Spring is coming! 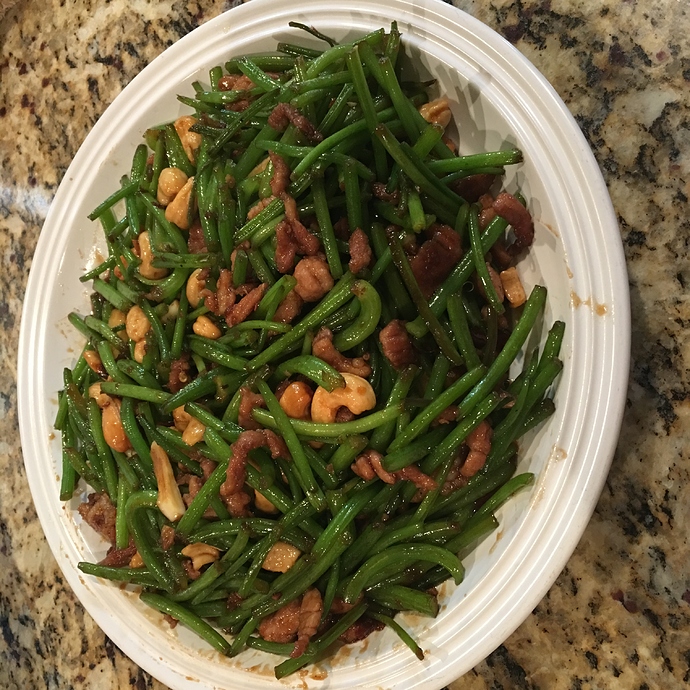 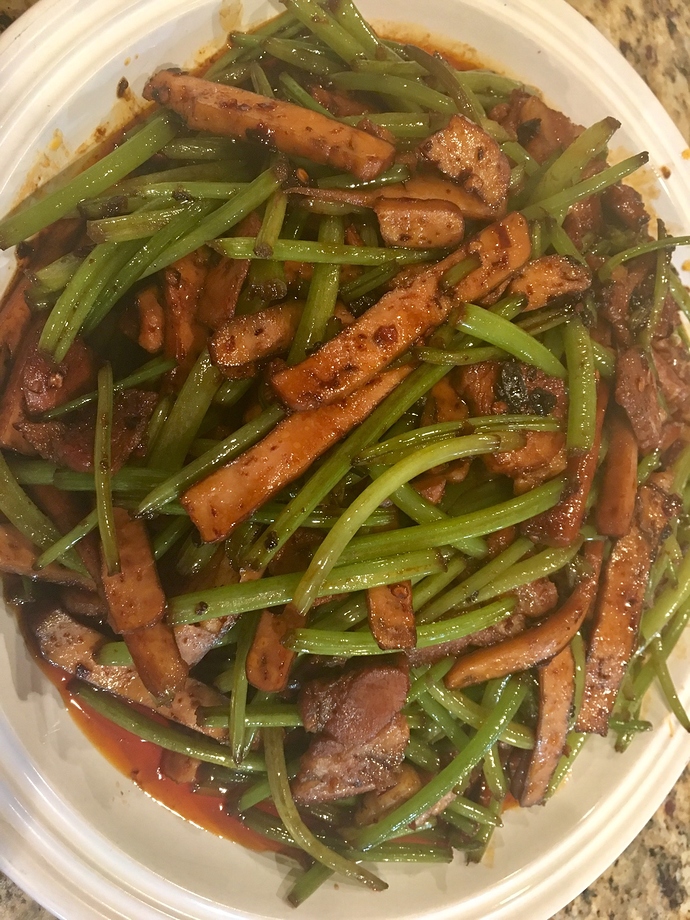 One of my favorite things to grow. Unfortunately, or fortunately depending on how you look at it, I’m the only one in my house who eats them.

I don’t know who is pickier, my wife or my kids!

Mainly because you don’t know how to cook it.

I wish it were that simple.