Dug some sweets today. Although all of the conventional literature says that “no variety is resistant to scurf“ my experience has been different. So far this year: 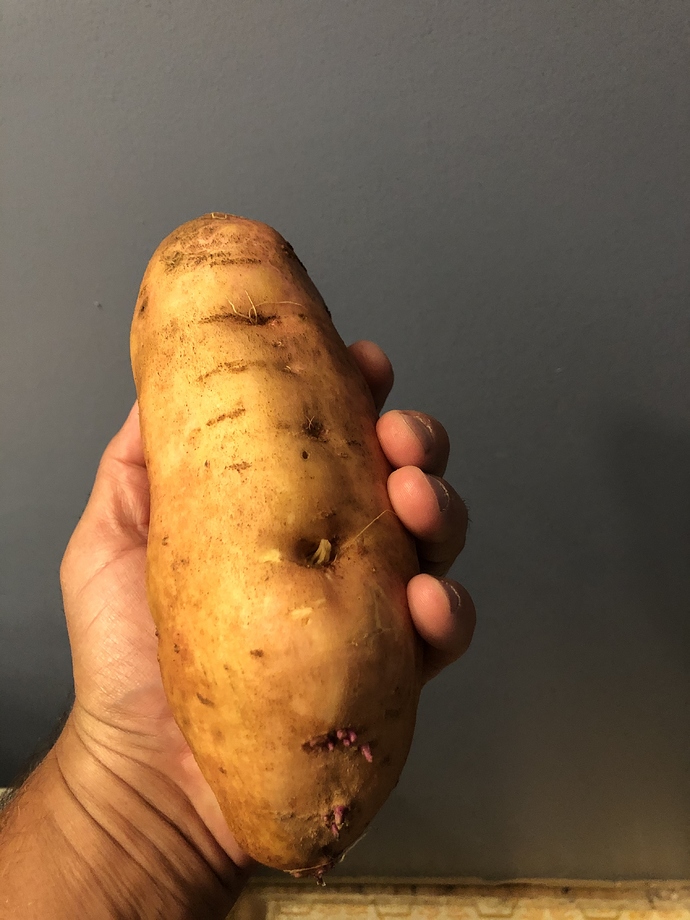 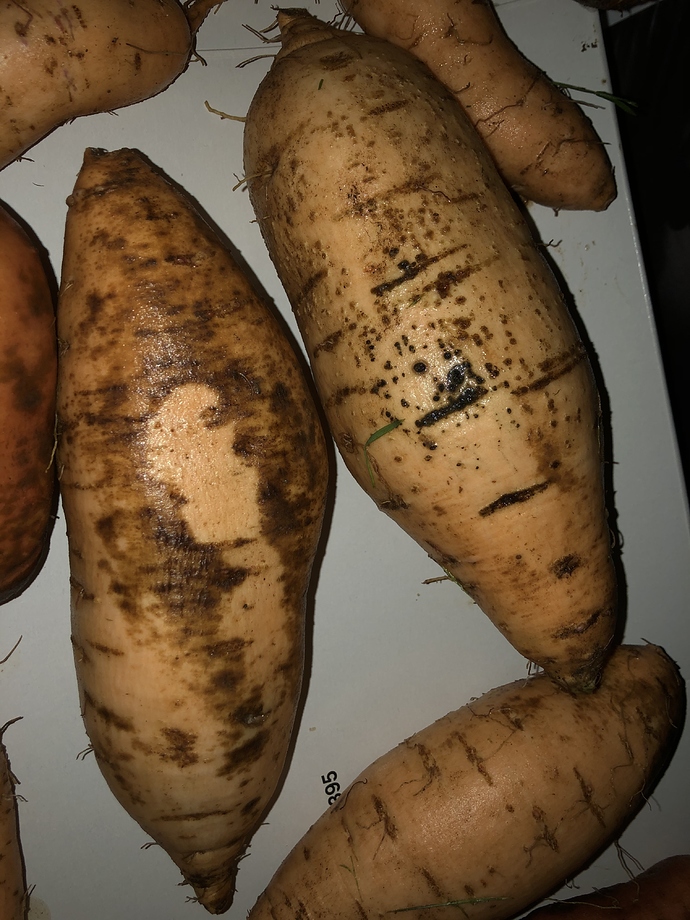 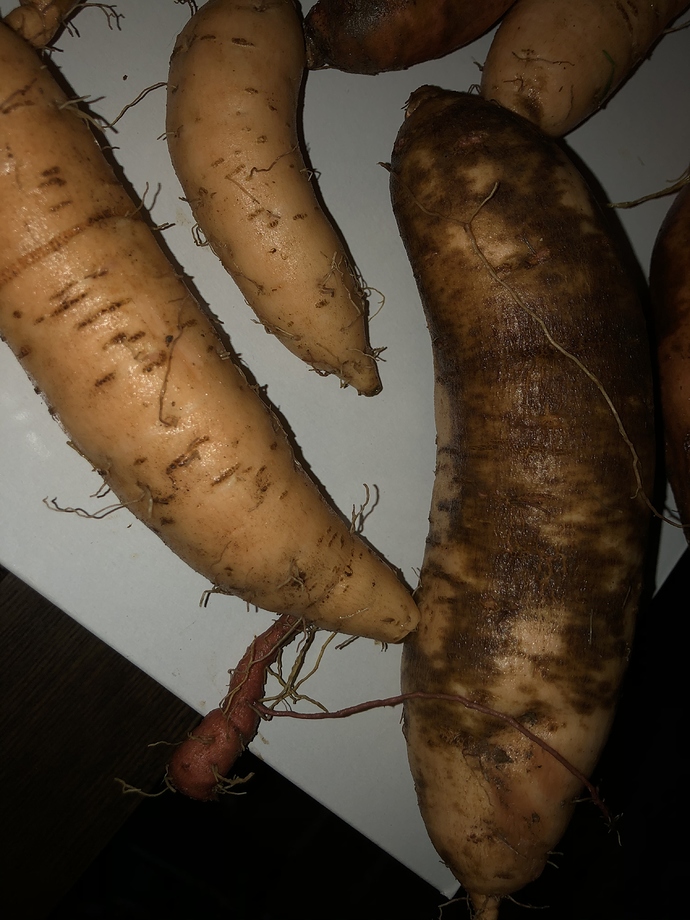 Ginseng Orange - severe scurf on about 2/3 of the larger roots.

At least some of this may not be scurf, but viral symptoms. Sweet Potato Feathery Mottle Virus (SPFMV), of which there are apparently a number of strains, can sometimes cause discoloration and fine cracking—“russet crack”—on sweet potatoes. If I’m not mistaken, I think I see some of this cracking in those discolored patches on yours. You will also likely notice purple ring-spots, vein feathering, and other purplish discolorations on some of your sweet potato leaves. Some cultivars are more resistant than others to root symptoms—and Jewell may be one of these. Some of the old cultivars such as Porto Rican Red are so badly affected by certain strains of SPFMV (or combinations thereof) that they end up with dark, corky areas in the flesh itself.

It’s been a problem here for many years. Our Georgia Jet sweet potatoes in particular always ends up with a lot of russet crack on the skin, but they eat okay, and seem to store long enough for our purposes. (We try to eat the most severely affected tubers first). Still, it bugs me, and I have tried to start over a couple times with fresh, virus-free plants—but to no avail. The virus is carried by aphids—who acquire it by feeding on infected host plants such as wild morning glories—, and they are pretty much impossible to control well enough to prevent transmission. I’ve just learned to live with it.

Anyway, just a possibility. Perhaps someone more versed in sweet potato culture and virology will chime in.

I’ve found that if I plant pieces of vine instead of slips with roots that scurf is pretty well eliminated on all varieties. I used to have trouble with scurf, but now I don’t worry about it any more.

We planted sweet potatoes for the first time here in Michigan. They did very well. I’ve never heard of scurf. Is it a southern thing, or something that builds up in the soil? Just dug ours today. 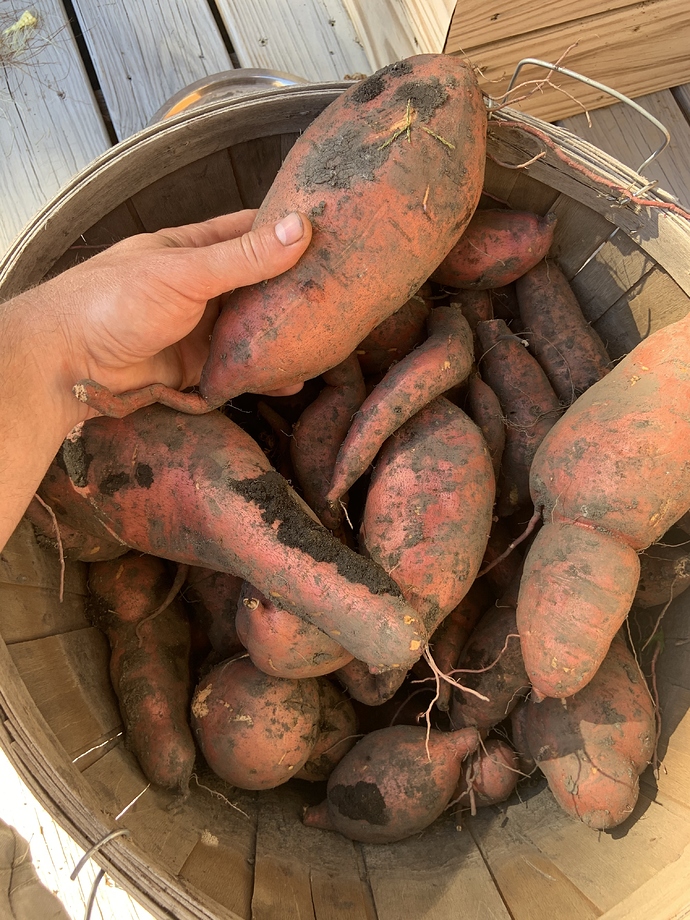 You may have some scurf there yourself. It’s hard to tell because of the dirt.

Then after a week of curing, some look like this: 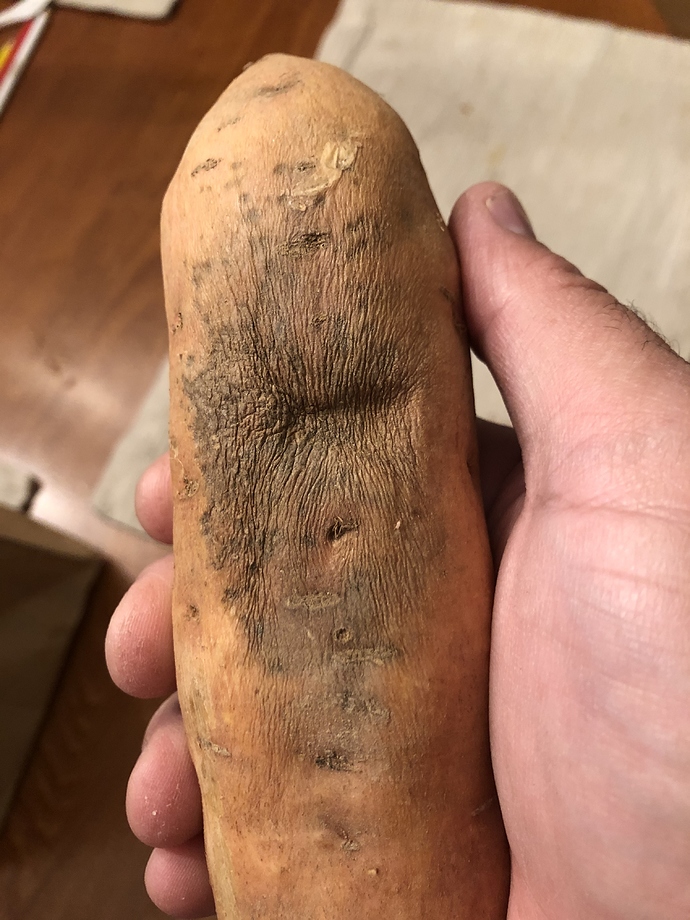 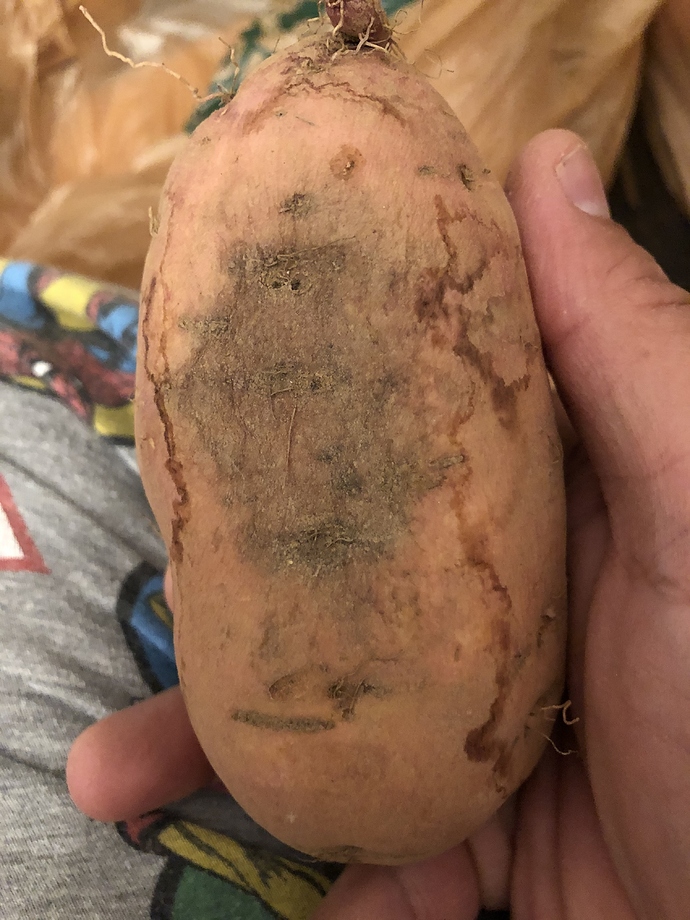 That’s a good question. Our neighbors gave us some extra slips and I’m not sure what variety.

The one time I did vine cuttings instead of slips, I got 7 lb lunkers that didn’t even taste good.

Maybe next time I need to bury more nodes.

I don’t know if it’s true, but I think I read somewhere that burying part of the vine horizontally versus straight down makes a difference in whether plants will produce fewer larger potatoes or more smaller potatoes. I normally bury vertically, mainly because I’m mostly using cuttings that aren’t long enough to do anything else with, and I’ve never really had a problem with too few and too large potatoes (except with one really unusual variety I grew for the first time this past year, Woksaken, and I’m assuming that’s just the way that variety always is.)

Something else you might consider, particularly if you’re growing your own slips, is to at least grow from vine cuttings the potatoes you plan to use for growing the following year’s slips. I think scurf problems tend to build up over time, so maybe some use of vine cuttings could help break that cycle. 7 lb’ers definitely aren’t what I’d choose for seed potatoes, though. Based on my experience, though, I’m completely sold on using vine cuttings pretty much exclusively.

You should’ve seen this one I harvested last year. It looked like Quato from Total Recall.