Sweet Scarlet is a Bad Dream

I planted 5 Sweet Scalet peach trees in 2012. The descriptions by Clemson sounded decent. The nursery who carried it (Adams) also had fairly glowing reviews.

However, this has been the worst peach ever for me. Last year it got bacterial spot so bad, the trees completely defoliated and all the fruit dropped. We had some severe frosts this year, and this variety was among some of the hardest hit. The pretty much full sized trees had b/t 50 and 100 peaches on them.

This year I sprayed Mycoshield for the bac. spot on all the trees, and the foliage and fruit looked pretty good for this variety.

Now some of the fruits at ping pong size are dropping for no reason. Other fruits look like this: 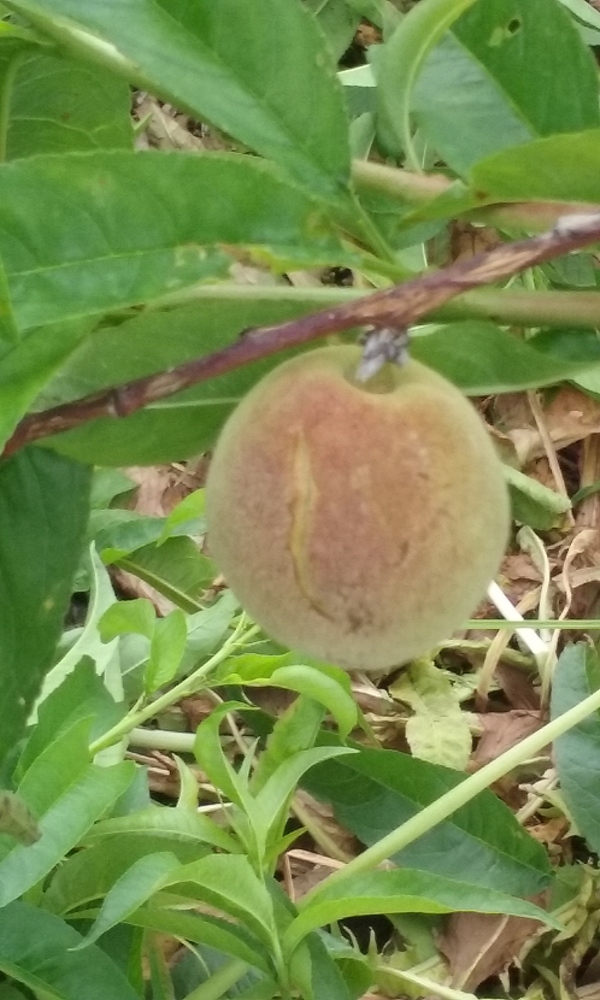 I’ve had plenty of cracked peaches before, but it’s only the worst varieties which crack this early.

This is my suggested nursery description for this peach:

“Sweet Scarlet- Has beautiful lush foliage which defoliates promptly after leafing out, due to its prolific generation of bacterial spot inoculum. Frost tender. Fruit is prone to drop and split. We are offering this variety based upon its excellent reputation for high quality fruit, although we’ve never been able to taste any from our own orchards.”

“Sweet Breeze- Has beautiful lush foliage which defoliates promptly after leafing out, due to its prolific generation of bacterial spot inoculum. Frost tender. Fruit is prone to drop and split. We are offering this variety based upon its excellent reputation for high quality fruit, although we’ve never been able to taste any from our own orchards.”

That was a hilarious description. It sounds appropriately named, since the only sweet peaches those tress are making are in the buyer’s dreams.

Olpea, that is so funny!

I know it’s not funny when the trees you grow for years do not live up to their reputation, but your new description is hilarious

Edit: I originally typed the cultivar Sweet Breeze, but I meant to type Sweet Scarlet. I have at least 4 peaches with the name “Sweet” in the name, so it’s hard to keep them straight. Should get easier though, because soon I’ll have one less.

Musser Research Farm has a few years of reviews of Sweet Breeze.

Mark,
I don’t grow Sweet Breeze or Scarlet, but the best new peach that I’m growing
this year is July Prince. It is everything Sweet Breeze/Scarlet isn’t. The words bullet proof and prolific do not do it justice. I can’t wait to eat my first one. If you don’t already have it, I’ll be happy to send you some wood.

Thank you so much Ray. You are so nice. I actually have July Prince. I remember being really excited about one of the Prince peaches. When you mentioned July Prince, I thought that was the one, but had to look it up in my notes to be sure.

I would echo everything you said. Since I’ve had it here, it has shown no bac. spot on the foliage. This year it had a 100% fruit set, in spite of the damaging frosts (very few varieties had 100% set this year) even though the tree is very young.

I have most of the Prince peaches now (counting the August Prince you sent me last winter - I think I may have some takes on that scion wood, but it’s a bit too early to tell for sure. They are pushing a little green though.)

Even Sureprince didn’t set any fruit (I would have thought with a name like Sureprince, it would have had a good fruit set, sort of like Surecrop did.) All my Prince peaches are pretty young though, so I generally don’t expect them to really start setting until they get a little more size.

Jerry Frecon was pretty impressed with several of the Prince series peaches while he was at Rutgers.

Mark thanks for the kind words. Two things sold me on July Prince,
the rave reviews that Dr. Layne gave it, when he was at Clemson, but
even more so, were the things the guys at Fruit Tree Farm told me about
it. They raved about it and told it was their number one seller, especially
with their commercial growers. It’s supposed to be a very large peach. They
were out of stock, and talked me out of buying anything else, until they
had it the next year. I figured these guys must know something, so I called
around and luckily was able to find a few at Vaughn’s. My trees are only in their second leaf, and are on Guardian. I just came in from thinning them for the umpteenth time, and I could still thin some more. I’ve never seen trees set so much fruit, much more than the other Prince peaches I have. I had the same freeze/frost problems and even sprayed 3 times with KDL. July Prince came through all of that. without batting an eye. I’ll let you know what the first peaches are like in another month or so.

Doh- I just added most of the other Princes (August, Autumn, and Flame), but not that one.

I am growing scarlet prince. It is a first year tree and set 9 fruit. I’ve thinned down to 2 peaches. I bagged one and left the other alone. Hopefully I get a taste.

How did the Scarlet Prince work out for you? Is it frost hardy, bud hardy?

Was hit pretty hard last year with PC. What peaches I have harvested from it have been very good.

So far Scarlet Prince has been a winner for me. July Prince too.

Thanks Olpea - I bought a Scarlet Prince today from Kroger’s on impulse, trying to figure out if it has the potential to be a good variety.