Testing Orient pear ripeness without fear of exausting my supply

My Orient pears are sizing up fast this year so I picked one this morning and it had some sweetness so this afternoon I went back and picked three to give the proper counter time. I don’t know why they are developing faster this year. Normally they start to ripening at the end of July or first week in August. With that said I still need to see if they finish ripening inside. 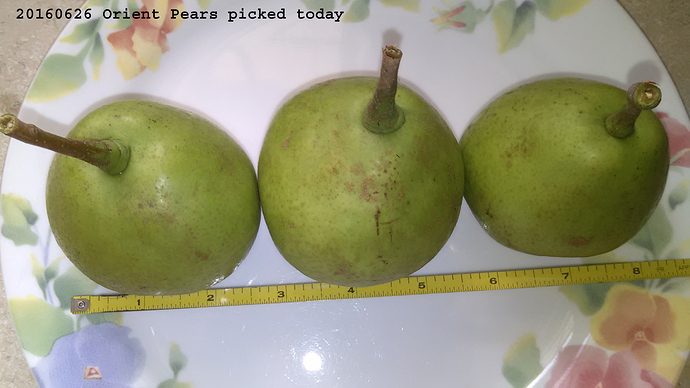 my orients are about the same size as yours at this stage but I didn’t think they were anywhere near ripe. mine don’t get ripe until early august and I was assume same this year. once fully ripe, they are double in size as compare to what I’m seeing today. Last year the squirrels really got into them towards the end - a good reason to pick early I would guess

Those look good. Man it would be a worlds record if they are ripe! Man that would be early. I liked to eat a few Orient every year then my better stuff would ripen I would usually give away lots of the Orients. They are ok though and were great for making pear sauce and such for sure.

@Outdoor334 and @wildscaper
These probably won’t be as sweet as the others would be a little later but I just wanted to see how this sample would react starting a little early. I finally got a pretty good set of these pears so it’s not such a big loss if they don’t taste good. These usually get twice the size of these and to me make a good pear. They do have a little grit but they really get sweet if left inside to ripen. The Orient might not be the perfect one to eat but the tree has been the most reliable disease resistant one I have ever seen. I will follow up in a couple of weeks on it early taste test.

It is without doubt as reliable as it gets once it gets going. I want a bad pear at all especially for cooking and canning. Glad you got a good harvest comming this year.

It’s not a bad idea to thin pears out a bit before they are fully ripe. It helps with quality. Something that I do is use them in stews and with roasts like you would a potato. It makes a great starchy vegetable with just a hint of tartness to a savory dish.