The best plums - interspecifics & hybrids to?

I’ve always wanted to step up my plum growing abilities and always had troubles of some kind with my plums. PC is pretty bad here. Green gage produce every 5 years for me and I had bad luck with Japanese plums also. It’s the frost getting them in recent years. All that said wild American rootstocks produce plums like crazy which I intend to graft over. What is your favorite plum? When I was a kid my mom grew a huge fruited cherry plum cross she got at Henry fields or gurneys that tasted awful. Never forgot its beauty. The fruit was big like peaches but tasted like chewing on a besseyi pit ( very bitter) .They were one of the prunus besseyi crosses.

Clark, some of the Fedco offerings of hybrid American plums mIght work for you. I just grafted a few last year so can’t give much of a personal report. But @JesseS wrote a helpful thread about Purple Heart that might be worth a read.

2017-Opal
2016-Toka, Purple Heart
2015-Superior
This year I’m hoping for more euro varieties, along with some new (to me) hybrids like Black Ice, Oblinaya, Lavinia

Beach plums are a good plum backup -they bloom a week or more after my euros, which bloom a bit after the hybrids. Plus bp are disease and bug resistant, I have curculio and brown rot pressure, and my bps were unfazed by both. They could be another offering for sales to value added product producers.

Jesse,
You likely remember I still raise a bunch of beach plums and like you like them in certain aspects. The low pit to flesh ratio and smaller yields have nearly pushed me to give them the axe at times. They are In my opinion a nice jelly plum worth keeping. My primary plum crop I’m expecting higher production and better flesh to pit ratio. I think you did a great job with this thread on beach plums Beach plums - #57 by clarkinks

Interesting topic. I’m pretty new to plum growing so most of my input is only referencing other peoples information. For my area I have heard good reports about Odom, Guthrie, AU Rubrum, Producer, and Spring Satin doing well. I believe they are supposed to be somewhat disease resistant. All these and others have bloomed and if I can escape the late cold snaps I will get to do a taste test.

All these and others have bloomed and if I can escape the late cold snaps I will get to do a taste test.

That’s the issue for me too, and I suspect would be for @clarkinks growing Guthrie and Odum. Those are blooming now for me, I guess because of all the warm weather we’ve had. Predicted low of 34 on Saturday, keeping my fingers crossed that this will be our last cold snap and that 34 means 34, not 30.

I only grow three E plums, all on Marianna2624. I like Castleton and Coe’s. They taste like what plums should taste like.
My Euro blooms a few days later than Japanese plums.

I’ve grafted about 10+ varieties on these three trees. I can report it to you next year.

@BobVance, whose zone would be a bit warmer than you, may be able to give you his input what works well for him and what not.

Well I like the Interspecifics myself. Some grow very well here in the north. I’m still testing varieties. I have not really been that impressed with regular plums. I have not had a lot of them though. Dapple Dandy seems to grow better than any of them. Really liking yield and growth habit. When not ripe I tried one and thought it was the worst plum I ever tasted. But when it was ripe it beat everything else last year. Huge too! 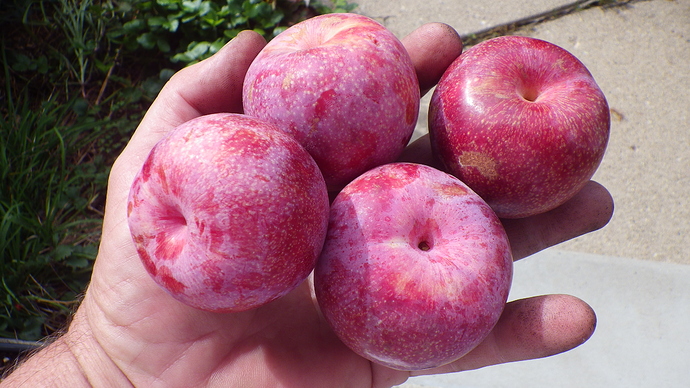 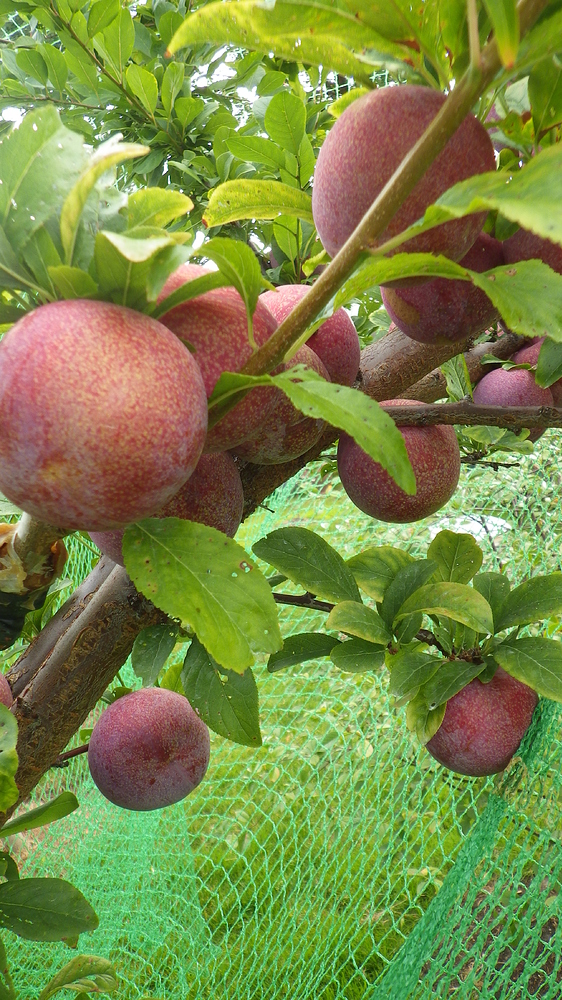 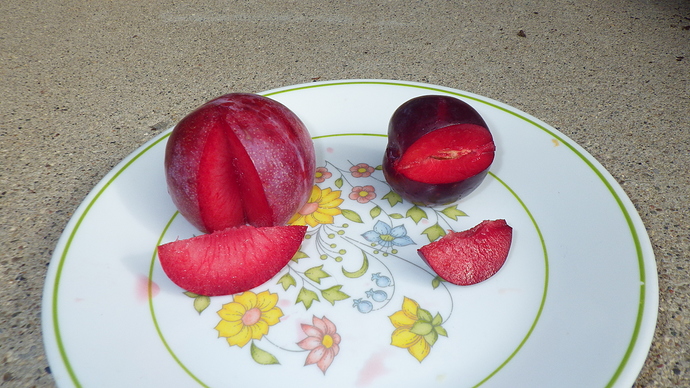 Patent expired, ask for wood next season to try it out. I would suggest trying before buying a whole tree. Some users here ripped this tree out, I thought they were very good, I guess tastes vary a lot, Scion is free so test it out, you can always remove. Will graft on peach or Asian plum. I thought it was better than Flavor King, which to me has a perfume taste I do not like. Never tasted that in anything else, but found it not good. Seems most like so keep that in mind on my suggestions. My wife thought the same thing as me. She thought DD was the best plum she ever had. And compared to what they sell as DD in the markets, what junk! You cannot pick these early! Lasts about 5 weeks in the fridge.
Harvest was 09-03-17

@Drew51,
Thank you for the kind offer. Since we don’t want to butcher your trees to much I might just get a few buds from you in June or July. Tbudding is a good way to go because it takes next to no material. Whatever we do we don’t want to reduce your fruit production.

Yeah no problem at all. It is only a scaffold, and I cut a major branch off the scaffold this year to make room for a graft. Still it is like 5th leaf, so it is big. Harvest was very good. In the bowl is Flavor King. 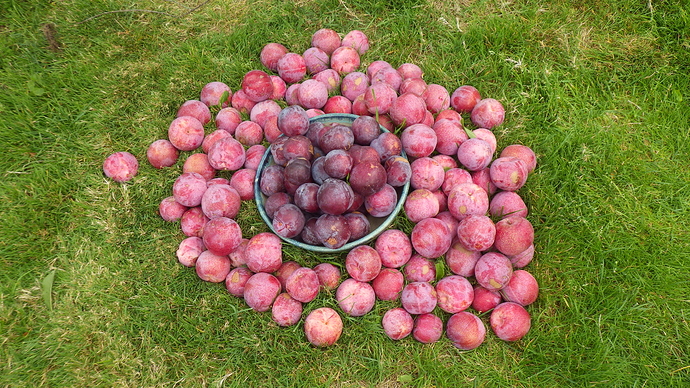 I hope that’s what we’ll have to enjoy in about 3 years, as I finally got my DD, FK and Geo Pride planted Monday! Got them in the ground before this week’s snowy/rainy mess.

When did your pluots first fruit? I may have asked you that before, but was wondering if they’re relatively quick to produce.

@Drew51,
I got a couple of kind offers to send me some scionwood of DD so I may not need any buds. I will post here later the results. As always thank you for the offer. Please don’t hesitate to ask me for anything I have!

When did your pluots first fruit?

It took 3 years. The ones you choose should work. They might fruit the 2nd year a few. My 2nd year was the first winter vortex, and nothing at all fruited. Now all my trees produce, it’s great! Nothing is ever easy though. I feel lucky because so many extremes are avoided here. Like right now many are complaining about cold spells, here right now the Lakes are colder than the air, so while some are hitting the 60’s, we are barely making it to 40. The Great Lakes is chilling the air throwing the cold around. Cold spells are fine, it never warmed up yet. Nothing is growing here yet, the longer they hold off, the better chance of fruit here. And it works well here year after year.
I’m going to start keeping better records, like bloom times and such.

Please don’t hesitate to ask me for anything I have!

Hey thanks very much! Back at you.

Flavor King …seems hardy (ish?) …mine fruited last year (grafted to apricot) after a winter up here (outside tree). Late, but delicious.

How does Dapple Dandy do on rot and fruit set? Those were the two killers for my pluot attempts. I loved my Flavor Supreme and Flavor King taste-wise but the first never set and the second rotted like wild. FS left to fully ripen on the tree was out of this world, a plum flavor that was hard to beat.

Clark if the frost is getting the Japanese plums you don’t have many options - the Euros bloom later but they are hard to grow due to all the rot and knot. Maybe try a late ripening Euro like Reine des Mirabelles, the later ones rot less. This plum is a real treat! PC will be bad on any plums, not much you can do about that.

How does Dapple Dandy do on rot and fruit set?

Hard for me to judge as the rot pressure is less here. Less than 1% and I’m not sure it was Brown Rot? Fruit set is amazing, it needs to be thinned. it looks to be loaded with fruit buds again this year. I’ll report on it. As you say fruit set, growth habit, etc certainly weigh into the equation to keep or not to keep. This tree or should I say scaffold, not whole tree is outperforming everything plum. It’s the go to plum when others fail. You got fruit here. At least how it is going so far, time will tell. My conditions are so different, still, seems worth testing elsewhere to me. This gives you something to eat while you’re waiting for your snowflake plums to ripen.

No wonder they kept going with this one! Dapple Supreme, Dapple Jack, and Dapple Fire

Thanks Scott for the advise. One nice thing about Kansas is our weather is constantly changing which may swing in my favor in the future. When I was a kid we had cherry plums every year. At some point things can change / will change here in KS. When I was a kid some crops were great because the cold weather was around longer. By the time these fruit that weather may be back and the pattern be in my favor for the next 10-20 years.