If you could only pick 2 varieties, to grow for firmness and creaminess, what would they be?

As far as a variety like Yukon Gold, I liked Yellow Finn. Good taste and productivity. For a good purple, I’d go with Magic Molly. I like to try a lot of different kinds, so it says something about it that I’m planting it for 2 years in a row. Purple Passion would also be good, though I’m not sure that either is exactly creamy.

Here’s a pic (from the other thread) which has Magic Molly. 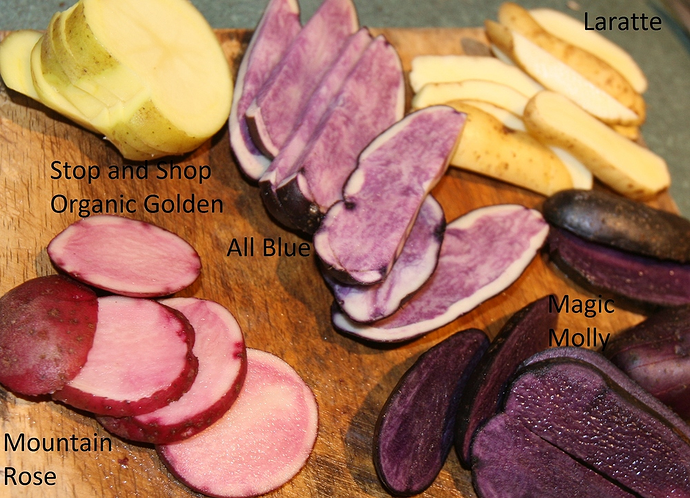 Patty the go to guy on potatoes is Bob. I’m sure he will give you far better suggestions that I as he has grown them all!

Not yet, but I am working on it

Actually, I feel like I’ve tried out a decent number, but need another few years (5-10?) to get it well sorted out.

Thanks, Bob. I’ll go hunting for Yellow Finn and Magic Molly. Wow, Magic Molly is REALLY purple. Lots and lots of anthocyanin in that potato!

This weekend, I dug up the first of the potatoes. There were a couple plants damaged at the end of a row, and I wanted some for dinner, so I dug them a bit early, only 58 days. Neither stood out, but both were good tasting and visually interesting. 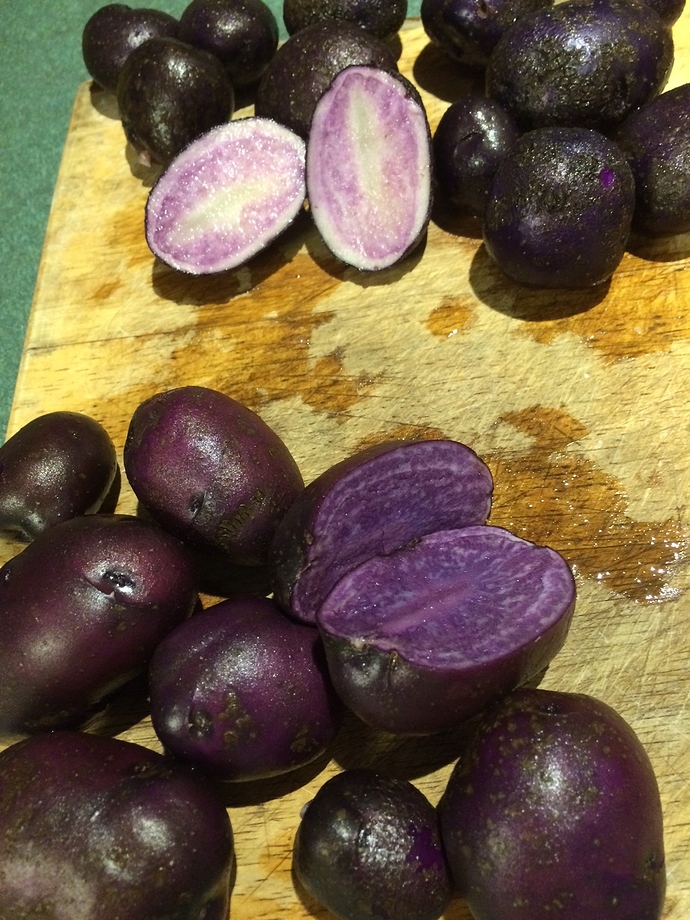 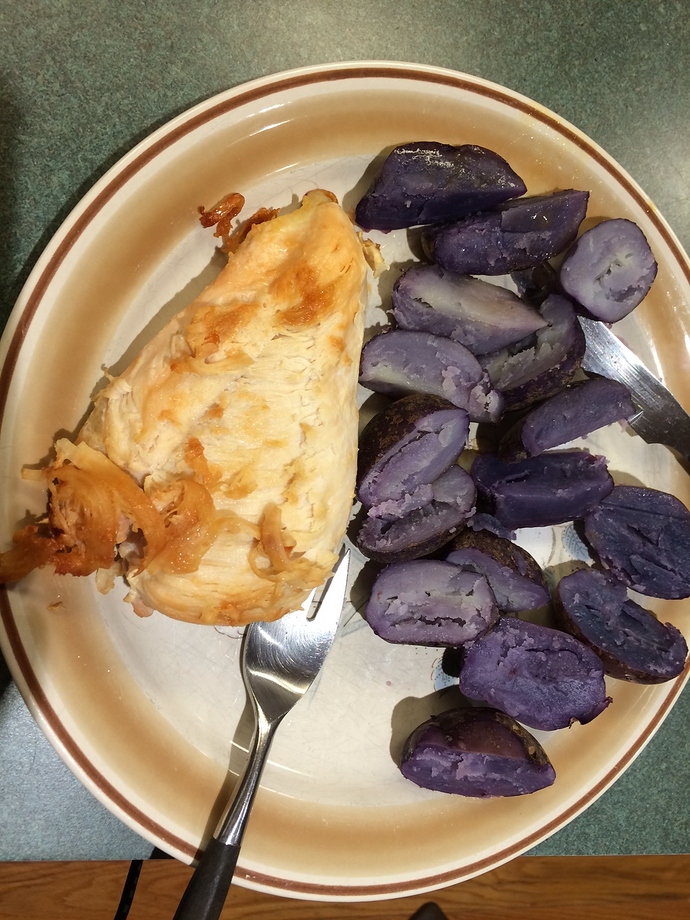 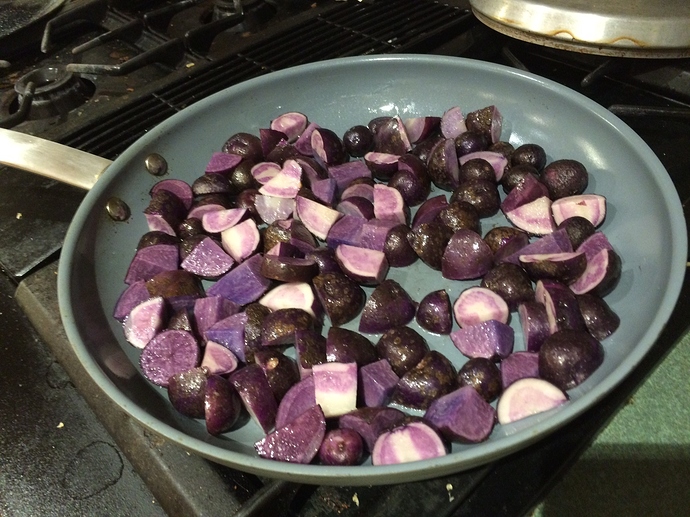 Very pleasing to the eyes.

Bob, once again your potatoes are fabulous. My Rattes potatoes are ready now. I did not know it was an early potato. Maybe it is all of the sun and heat that has moved them right along. They are growing in a container in on the terrace. The potates in ground are not yet dying back. Oh your purple potatoes look so good!!! A little butter? Thanks for the photo.

When harvesting, do you normally go off the variety’s days-until-ready or wait until the plant starts to die?

La Ratte is early? I didn’t know that

Maybe because it is a fingerling. But I’ll take some pics soon!

When harvesting, do you normally go off the variety’s days-until-ready or wait until the plant starts to die?

It depends on how hungry I am. I normally start on them some time in July with the least healthy looking plants on the theory that they aren’t going to be getting that much bigger anyway. I dig up only enough for 1-2 dinners and repeat as needed. Once they start to die back, I dig up the rest. I probably get a bit less this way, but I sometimes replant in July, so I’m actually getting two crops.

La Ratte is early? I didn’t know that

According to TMPL, it is 95 days. If MrsG started around the beginning of May, that would be about right. It could be the extra sun is moving the process along faster. It’s also possible that they are a bit stressed from growing in containers- I always find it harder to keep plants happy that way.

Here’s some fingerlings I dug up today. The vines had died back already, even though I think I planted them only 70 days ago in late May. The reason I say “I think” is that they were supposed to be leftover HoneyGold, but the shape is wrong. I think they could be some other leftover fingerling. Whatever they were, they were only OK. I just finished eating and the Purple Majesty I dug at the same time were much better. 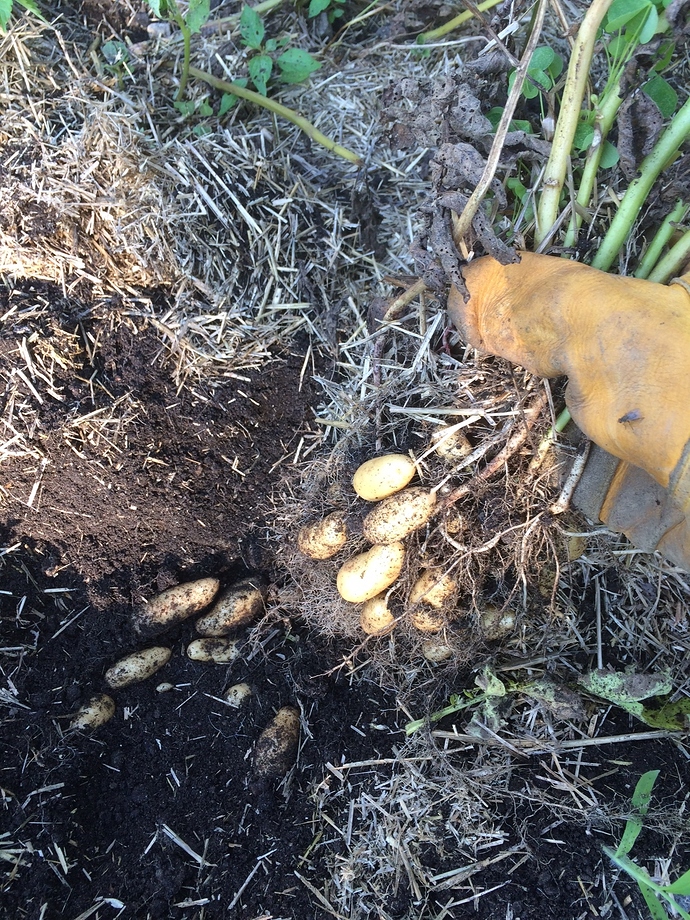 They were good enough with the chicken without any butter. But I do love to cook them in butter"

Butter a cookie pan, slice them, and cook in the oven at 375 for about half an hour (variable depending on thickness), flipping once for the thicker ones. You can make them cook a bit faster by flipping each slice when you first put it in the pan to get butter on both sides.

There was a late freeze after I planted, and this may have retarded the potato vines - I know some never came up

Bob, love the recipe. Thanks for chiming in. Actually my potatoes went in late April this year and early May. My in ground potatoes (Kennebecks) will be ready in two weeks. They are sooooooo good!

A few more potato pics…
Purple Sun- I just dug the first of these today and it looks like something beat me to a couple of them. 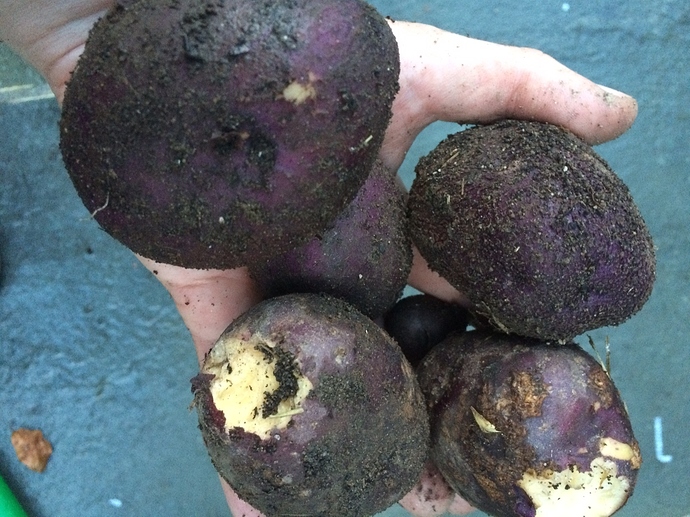 Bora Valley- one plant is a meal. They have been pretty tasty so far, though not as visually distinct as the ones with the dark purple throughout (they are a mix of white and purple inside). 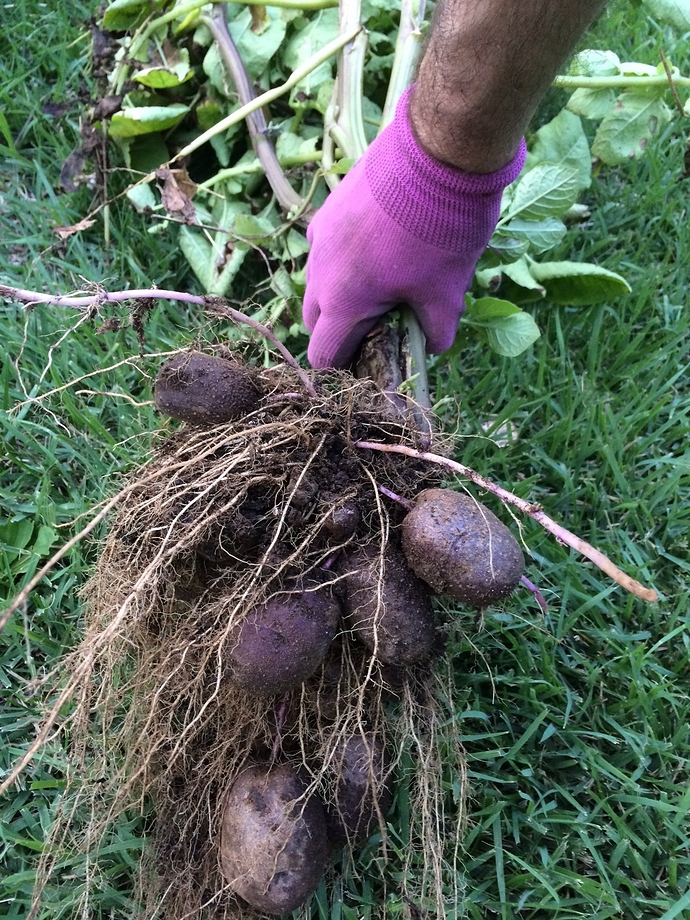 I think Yellow Haze may be my new favorite. They aren’t particularly large, but had great flavor and a decent amount of moisture when baked.

The Magic Molly aren’t really ripe yet. At least I hope that is why they weren’t as good as I remember. They are pretty though. 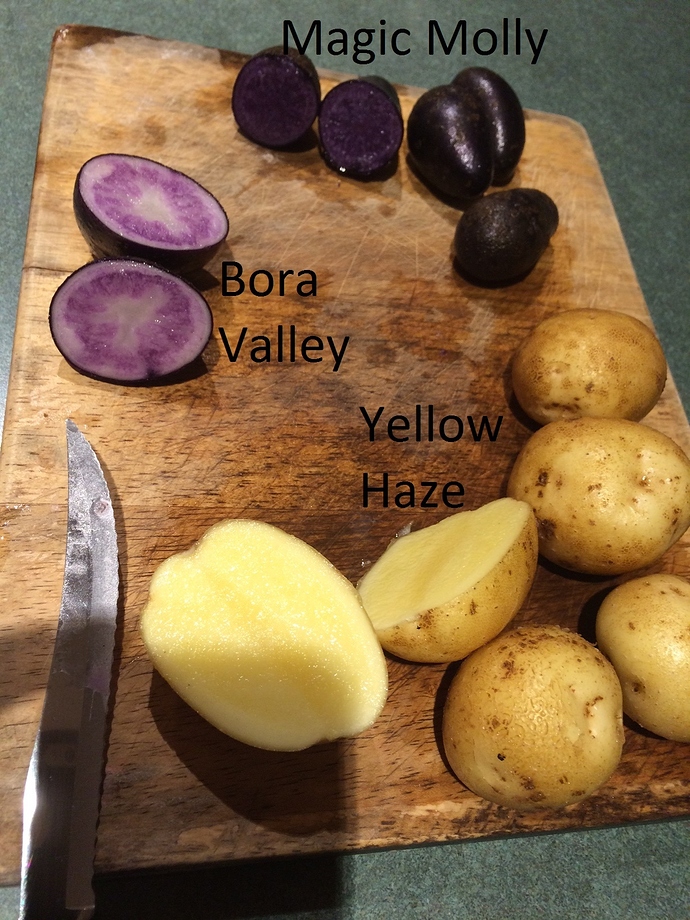 To me, Adirondack Blue is also as purple as Magic Molly. Can you compare the pics of all your blues?

To me, Adirondack Blue is also as purple as Magic Molly. Can you compare the pics of all your blues?

Due to color blindness, I can’t actually distinguish purple vs dark blue, so I’m not the best judge. Adirondack Blue is the only “blue” I’m growing this year. I grew “All Blue” last year and there is a pic in post #21 of this thread.

Thank you so much for the potatoes. All were wonderful. I am partial to Adirondack Blue and Yellow Haze (what a great yellow potato).

You’ve inspired me to grow potatoes next year.

Maybe, somewhere someone is selling Purple Haze, too.

I too am inspired to grow some spuds next year.

What varieties you have in mind? I have never had any yellow/white potatoes that tasted like Yellow Haze so it’s first on my list. I’ll go with Bob’s recommendation as his growing condition is similar to mine.

I’m looking for a Yukon type with a melting texture, and fingerings or new potato sized little guys. Don’t care much for color, more concerned with taste, ease of growth and texture when boiled or baked.