Continuing the discussion from Starting seeds:

Bob This is Fantastic. Thank you so much. I’ll go to every site you mentioned.

Bob, just placed my order with the ‘Maine Potato Lady’. She has an amazing list of potatoes and sweet potatoes. I’ll be planting them in potato bags this year. Thanks, so much!

Mrs G, Which ones did you get?

The only repeat for me on this list is Magic Molly. Anyone else trying some interesting potato varieties?

I’m placing my order next week. I’ll let you know. Its a good mix. I know La Ratte is one and another has dark purple skin with pure white flesh. A beautiful looking spud! I’ll be ordering about four or five! Can’t wait. I’m growing these in potato bags this year!

I’ve grown Purple Viking and found it to be delicious!

I’ve got Magic Molly coming from Fedco, and apparently some Stuttgarter Onion sets too, which I’d forgotten about. @mrsg47, do you have a recommendation for potato bags?

I had Purple Viking a few years ago and thought it was very pretty. Taste-wise, it was good, but didn’t blow me away (fairly mainstream). Here’s a pic from when I grew it. 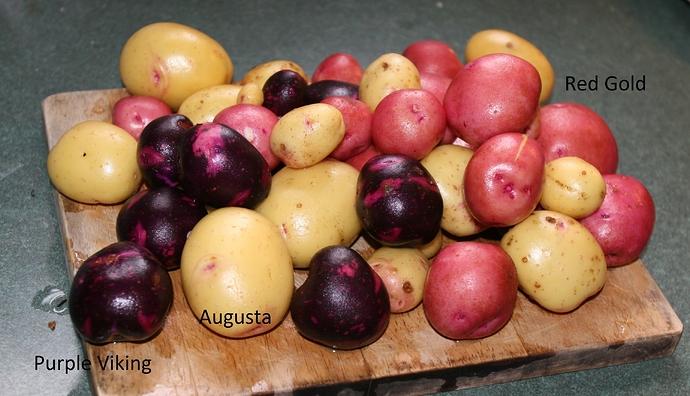 I think they are a purple version of plutonium! Your potatoes always look fantastic and that is why I want to grow more varieties. I grew some of the first pink and ‘blue’ potatoes ever offered. When I cooked them they always looked kind of grey. Not an appetizing color. So the purple ‘Viking’ with white flesh is very good looking. Sorry you think its so-so. Ugh, well I’ll give it a try anyway. Thanks for the pic. Makes me want spring now!

These work really well!!! I buy both sizes. Larger bags for Kennebecs and the small bags for the fingerlings. Hope this helps.

I grow the Adirondack Blue potatoes every year, and they are so much fun! Nothing like seeing people’s reaction when you cut one of those in front of them and they see the (almost floresent) blue/purple color inside them! And making many dishes with them is pure joy- mashed potatoes look just like cake icing when you use them. Most people have never heard of or seen anything like them. They usually assume they are some kind of sweet potato, but of course they are not.

So I encourage everyone to try them and I think they are fun. That being said, I also have to say that they are really just a novelty as far as I am concerned. I’ve seen claims about the “rich” taste and so on, but truth be told I’d challenge anyone to put a blind fold on and try to tell them from regular potatoes. Also, they rarely get much bigger than a golf ball. SO its hard to argue they are better or more productive than standard potatoes, but in no way do I want to discourage you folks. They are fun, and I grow them just for that reason and you should to! The photos don’t do the color justice…it is a crazy purple! Have fun.

Bob, you encouraged me to plant potatoes with your last summer pictures. I’ve ordered All blue and Desiree varieties for the next season.

I just went back through my notes from a couple more years and found the following. I should have reviewed this before buying this year’s seed potato, as it seems that I bought one that I thought was small and dry

2013:
Purple Majesty- A bit dry, interesting flavor. Most too small. Brightly colored inside.

Yellow Finn- Better than PM. Quite russeted. By far the best producing of the 3.

French Fingerling- A bit red inside too. Not bad. Almost as good as S&S. Only 1 large potato. Rest are quite small. Poor crop. Note- I’ve had French Fingerling later and been very pleased with them- makes a nice moist baked potato 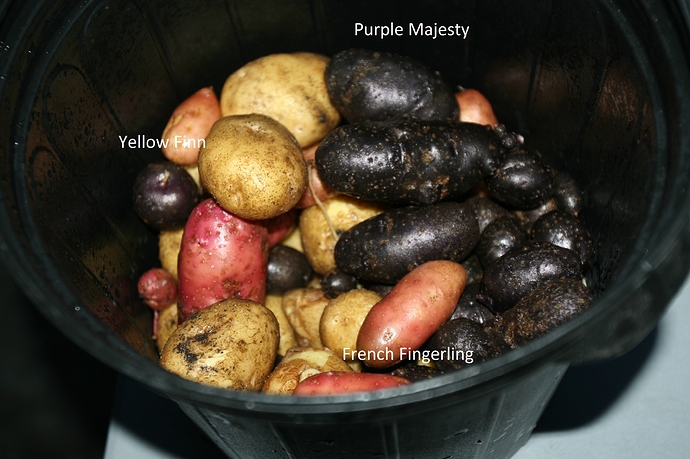 S&S goldens- a bit sweeter and juicier, but the purples crisp up nicely

Russian Bananna- (no note at time, but I don’t think I was impressed with them- middle of road)

Summer Pic (from when the notes were taken): 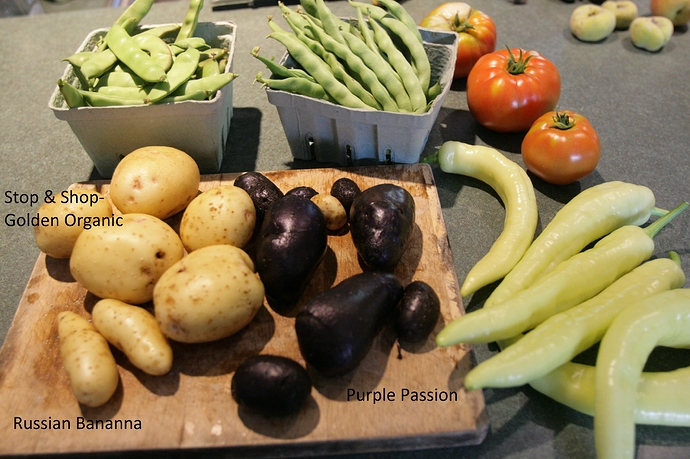 Another shot from the last of the season on November 8th, this time before washing. There are also a few Rose Finns (I don’t remember much about them, other than that I wasn’t fond of them) mixed in here. I think they were leftovers from Whole Foods, which I planted when they sat around long enough to get eyes. 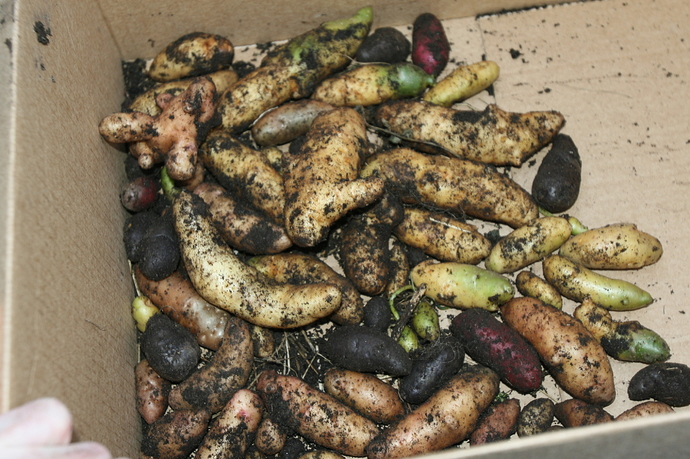 Sorry you think its so-so. Ugh, well I’ll give it a try anyway.

I agree- don’t let my assessment stop you, as tastes differ and there are many different uses for potatoes, greatly impacting which ones are “good”. In the case of Purple Majesty, even I didn’t listen to me.

Bob, you encouraged me to plant potatoes with your last summer pictures. I’ve ordered All blue and Desiree varieties for the next season.

All Blue was very good last year for me and I was tempted to grow it again. In fact, I bet that most people would like it better than Magic Molly. All Blue’s taste isn’t quite as distinctive (still very good), but it has more moisture content.

But, rather than growing it again this year, I decided to focus on comparing the purple potatoes and trialing a couple others instead. I do have a few seedlings (potato fruit seeds which I started ~1 month ago) of it and Magic Molly which I’ll be planting out as well.

That being said, I also have to say that they are really just a novelty as far as I am concerned. I’ve seen claims about the “rich” taste and so on, but truth be told I’d challenge anyone to put a blind fold on and try to tell them from regular potatoes.

You should try the purple ones- they really do have a different flavor.

I’ve got Nicola seed potatoes on order from MPL for this season. I find their selection to be good, and prices low in the amounts that I want to order. Last year I grew German Butterball from them and they did well. Outsides were deeply russeted and size was mostly on the small size, but yield was decent and flavor very nice oven roasted with olive oil and salt. 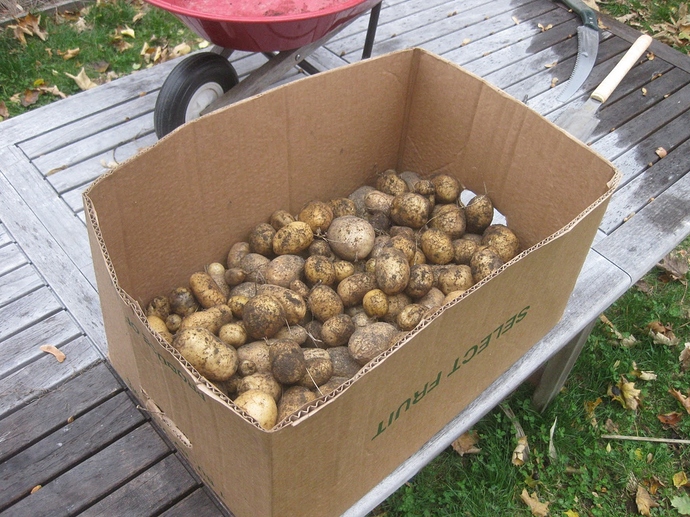 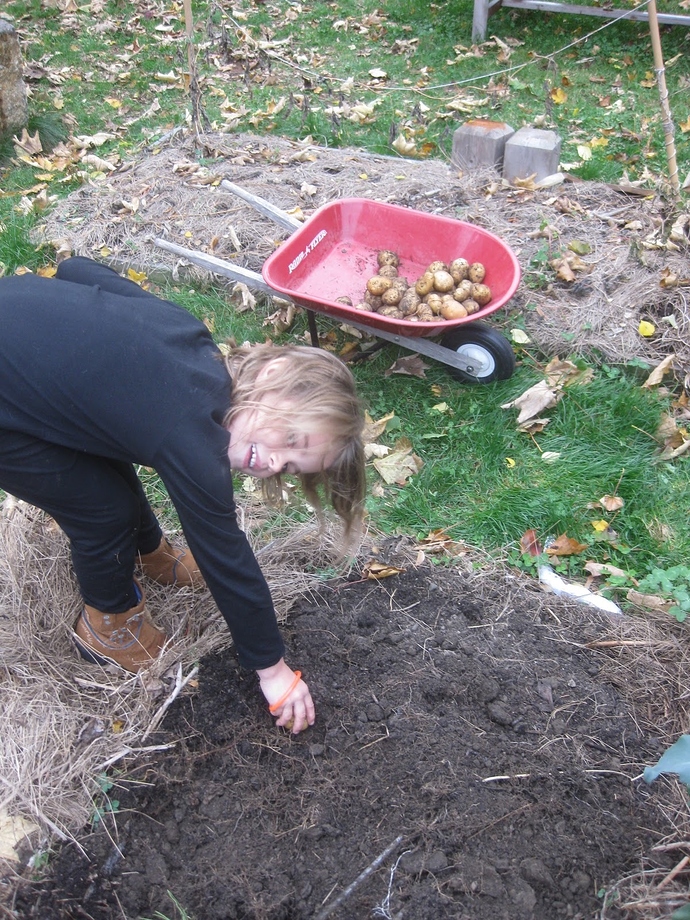 Bob looks like you’re becoming our Potato Guru! How great. All of your pics were so inspirational to many of us as you can see by the responses. I look at growing potatoes like a treasure hunt! Once the stems start turning brown and its time to dig, it is just great fun! I just have to remember not to use good soil! They don’t like potting soil at all! Thanks again Bob!

Bob, my final order through the mail is in: La Ratte, Purple Viking, and German Butterball. We have a great AGWAY here, because there are so many potato farms by the sea. I have a great local selection of other varieities. I’ll need one that is red too, but I’ll pick those up at the store. By the way Territorial seed company had a nice selection of potatoes this year as well. Thanks for your help!

I’d like to grow two potato varieties in bags, just trying to find 2 really great cultivars. I just love Yukon Gold, so creamy and smooth. But, I would like to grow a purple potato as well. If you could only pick 2 varieties, to grow for firmness and creaminess, what would they be? I usually roast or boil my potatoes, as opposed to a russet variety for baking.

Patty the go to guy on potatoes is Bob. I’m sure he will give you far better suggestions that I as he has grown them all! I am partial to German butterball, its better (just to me) than Yukon Gold. Its the creamiest I’ve found yet.

mrsg47, I think that isone of the varieties I grew in Indiana. They were to die for. Like Yukon Gold, but even more creamy and firm. The absolute perfect potato for potato salad. I wished I could find my veggie garden list from back then. That was the most incredible veggie garden I ever had. My wonderful hubby built me eight 12’ x 4’ raised beds in two rows of 4 beds, and in between those two rows of 4 long beds, was a single 4’ x 4’ bed. Total of 12 raised beds. We fed the neighborhood, it was incredible. I had two bluebird boxes right across from the veggie garden, and those lovely bluebirds kept my garden bug free, plus provided some beautiful bird watching. It was delightful.

Lucky you! I only have three raised beds but I love them. I still have never seen a bluebird!