I’m looking for grape cultivar recommendations. My number one priority is taste. Also a priority is Pierce Disease tolerance. I’m in the southeast. There has to be something that tastes special out there unlike the supermarket grapes.

From the store bought stuff, I find myself enjoying the grapes that are starting to go “bad”. They taste “winey” or just more intense and concentrated.

Im no grape expert… not even a novice yet… but i think its hard to go wrong with Concord Seedless… its fairly disease resistant, tough, and the grapes taste good.

You can get totally lost in varieties…there are alot.

You have to ask yourself if you really want to build trellises and prune alot and do alot of tending if you want to grow grapes. 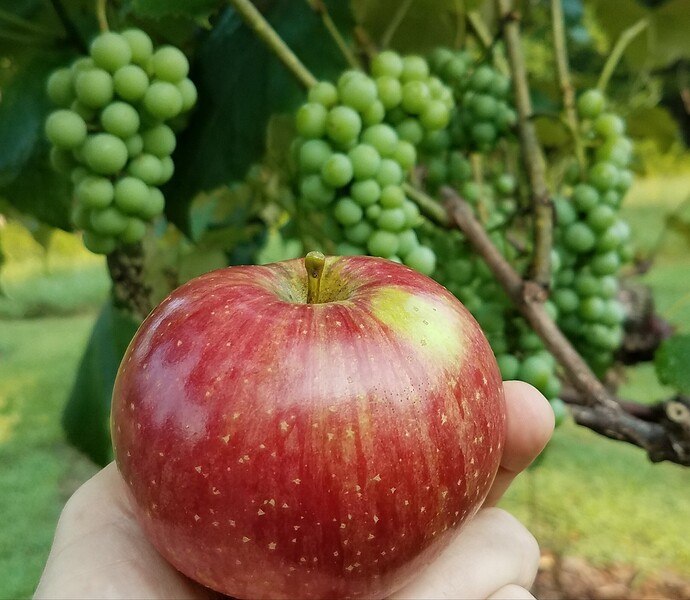 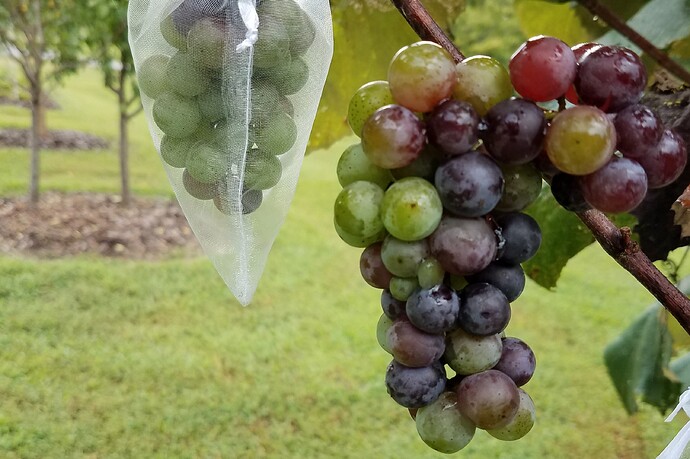 I have a seedless concord purchased from Starks 15 years ago. I like it… no disease issues. The grapes are smaller and small clusters… and mine ripen slowly over a month or more… it is not like you go and pick one fully ripe cluster… but you pick individual ripe grapes from the clusters.

I have to bag them or the birds will get many more than I do.

@TNHunter when you say no disease issues, do you do anything to spray your Seedless Concords, or are they pretty much plant and prune?

Southeast, right? I’d probably just grow muscadines. Most are Pierce’s Disease tolerant/resistant. I’m too far north to reliably grow them. I am, however, starting a small, low-input/organic trial of some of the old Munson hybrids. These might also be of interest to you. Many of the Munsons have good general disease resistance—including to PD. (Being out of the PD zone, I’m mostly interested in black rot and mildew resistance, which many of these also have to varying degrees.) “Lomanto” and “Champanel” (both PD-tolerant) are still relatively common in Southern cultivation, and shouldn’t be too hard to source. The only nursery sources, as far as I can determine, for some of the less common Munsons are Peaceful Heritage in Stanford, KY, and Fairhaven Vineyards in Hawkins, TX.

The need for PD resistance eliminates nearly all seedless table grapes. Concord seedless will die quickly in more southerly PD areas, but might hang on a few years under less pressure. There are several seeded hybrid grapes that are tolerant enough. Since you are showing zone 7b, I assume you are in the northern range for PD, so any tolerance may be enough.

For white grapes with good tolerance, Verdelet may be one of the better choices, and Villard Blanc may be another, although it is very susceptible to anthracnose. Seyval is another white wine grape that is also good as a table grape, that has decent PD tolerance. Orlando seedless is one of the few PD resistant seedless table grapes, but it has very poor disease resistance against fungal diseases. For red grapes, Muench, Mrs. Munson and Nitodal are all very good if they will ripen for you. All are pretty late ripening. They are not as easy to find however. Fairhaven Nursery is the best option for any of the Munson hybrids, Muench | Fairhaven Vine Nursery. America is another good flavored hybrid that has pretty bomb proof disease resistance, is PD tolerant and ripens pretty early with a mild Concord flavor. Some of the Florida grapes like Suwanee, Daytona, or Lake Emerald are also very PD tolerant and may be viable options.

i also like concord. my father grew the seeded ones and about 1 every 3 years would get a good crop of them to ripen here. they also make great juice. just bought a Beta which is in the same family and ripens a month earlier. $8 at TSC.

While searching through old horticultural literature for info. on the disease resistance of various Munson cultivars I found some very glowing reports of “America,” health-wise. A recent Connecticut trial—very different climate, of course—also found it extremely disease-resistant, but rejected it for bad flavor! It seems very divisive in this regard—some like it, some hate it. Even T. V. Munson described it as having “a very distinct peculiar flavor, much liked by some, and not by others.” Glad to hear another vote in its favor. I am inclined to try it on the basis of its disease-resistance alone. @Blake of Peaceful Heritage, next county over, has this one in his low-spray Munson trial plot, but I’m not sure it’s borne for him yet. He gave a very positive report of “Gold Coin,” btw, both in terms of flavor and vine health.

@NorthOzarksMO … I don’t spray anything on my grape vines branches leaves fruit. Absolutely no spray like everything else I grow.

And after fruit has set and clusters form and start filling out… I prune the canopy so that morning sun can get to the fruit… but leave the canopy that shades mid day and evening.

I grew America many years ago and did not find the flavor peculiar at all, just mild fruit with a hint of labrusca and black currant. In my no-spray vineyard, it never had any disease issues. Soil and climate must really affect the flavor, so maybe that is why it gets mixed reviews. The post oak hybrids can sometimes have a “bubble gum” like flavor. Not really what you want in wine, but not a problem in table grapes, as long as you like it. Another Munson hybrid with incredible flavor is Delicatessen. It was not very productive for me in northern middle TN, and had some disease issue that was either anthracnose or something similar. RW Munson was another hybrid that did well for me without any spray, but it was too tasty. Couldn’t keep the critters from eating them.

Sounds very delicious! I’ve actually heard a black currant note mentioned in connection with “America” before. Thanks for the report! Not many on the Munsons in general—not recently anyway. I’m surprised more people aren’t growing them; so many of them sound promising for low-input culture.

my Marquette is supposed to have black currant, cherry and spice notes in it and its supposed to be a good table grape also. i planted it and King of the North 2 years ago. for some reason both of them died to the ground in last years mild winter. only Marquette grew back last summer and its the less cold hardy of the 2. hopefully it survived our -40f we had but im not holding my breath.

Hey another show me kid! Welcome from up by KC!

I heard Everest is a improved Concord. Downside is I think Double A Vineyards still has the exclusive rights. Never tried it myself.

@Borer_the_explorer Thanks for the welcome.

I heard Everest is a improved Concord. Downside is I think Double A Vineyards still has the exclusive rights

I saw some reviews on it… mixed bag…

Schlabach’s Nursery carries them in their catalog.

South East US. Muscadines are what you want to grow. Hall and Paulk.

Lake Emerald is one of the best tasting grapes I have ever tried. I can only describe it as tasting kind of like white wine. The sugar and acidity were perfect on it. The downside is the berries are tiny and seeded and do not store well. It grows well without spray but didn’t produce for me in south florida (it produced in one year in Ohio). The lack of winter was a problem. You would need to be in central or northern florida or above to have enough winter for it. And it grows super fast like a weed, but once it reaches a decent size it hits a wall and doesn’t grow. Every time it did this I dig it up and it has a small root system that just doesn’t grow beyond a certain point. It also doesn’t grow well in 98 degree or hotter days. A lot of people grow it for the disease resistance but the tiny berries combined with some growth issues I just pulled it up and gave up on it. It makes a good wine, but the wine tends to oxidize and go bad so only good for blending a small amount of lake emerald juice.

Suwannee is 25% lake emerald in its ancestry (on both sides). Leaves are similar to Lake Emerald but a bit thinner. But it has large berries. I haven’t tried them yet. It is used mostly as a wine grape though is a good fresh eating grape. I got a rooted cutting last year. It grows fast, similar to lake emerald, maybe slightly slower. But has a little disease on the leaves, not a lot.

Daytona is mostly vinifera and hard to grow due to disease. I have some seedlings of BD whatever it is Daytona x Stover which has better disease resistance than either parent and is a good table grape though not as good as Daytona. Dunstan’s Dream is one of the best table grapes for Florida. It’s about 3% muscadine with other native stuff, a complex hybrid. Said to have very good tasting grapes (with native flavors) though it is a slip skin seeded grape. It has good pierce tolerance. I have some seeds from some other muscadine hybrids. They are about 3% muscadine but do pretty well here in south florida. A small amount of disease like Suwannee but overall pretty good.

Muench is said to be a good fresh eating table grape for the south.

Orlando Seedless handles the heat and humidity well and is pierce tolerant, grows fast. But the berries are small and it is prone to fungus, so needs spray. The only thing special about it is that its seedless and the berries taste good. If it wasn’t seedless no one would know about it because there are better selections. Though, as I said, it does grow well in the south if sprayed for fungus. A lot of varieties just don’t grow in hot weather not even considering pierce disease or fungus. They don’t die, they just don’t grow when its hot.

As a whole native grapes and native hybrids don’t store well. This makes it hard to grow them commercially or throw them in your fridge for a few weeks. It’s pretty much fresh eating or eat them the next day after being picked. Daytona is probably the only one that will store and ship well, but its too hard to grow.

Villard blanc is unlikely to survive in the south long term (probably due to other issues besides pierce disease, and though it has good pierce tolerance it’s not as high as some varieties), and Seyval Blanc doesn’t have enough pierce tolerance for the south, though you might grow it for a long time before being infected. It’s primarily a wine grape though. I have a Seyval blanc x shuttleworthii. It was doing well with the swampy rainy season but doesn’t seem to like dry weather in this sand that its planted in. CA8-15 is Villard blanc x shuttleworthii. It’s a good fresh eating grape that grows well without spray, though in south florida it is susceptible to rust fungus and may be damaged by late frost in colder regions.

Taris Burgundy is said to be a muscadine hybrid, but in reality is shuttleworthii x a vinifera wine grape. It is good for fresh eating, but the texture is not as crisp as some. It makes good wine. Gets a small amount of disease but overall pretty good. I have some crosses of taris that are more disease resistant than taris though there still is a tiny amount of disease on them.