Thinning and bagging apples and pears

I’m thinning and bagging my apples and pears. Good fruit set this year, so lots of thinning to do! Still have lots of apples to go This is my first year bagging, hoping for good results, especially since I seem to have beaten plum curculio (so far)! 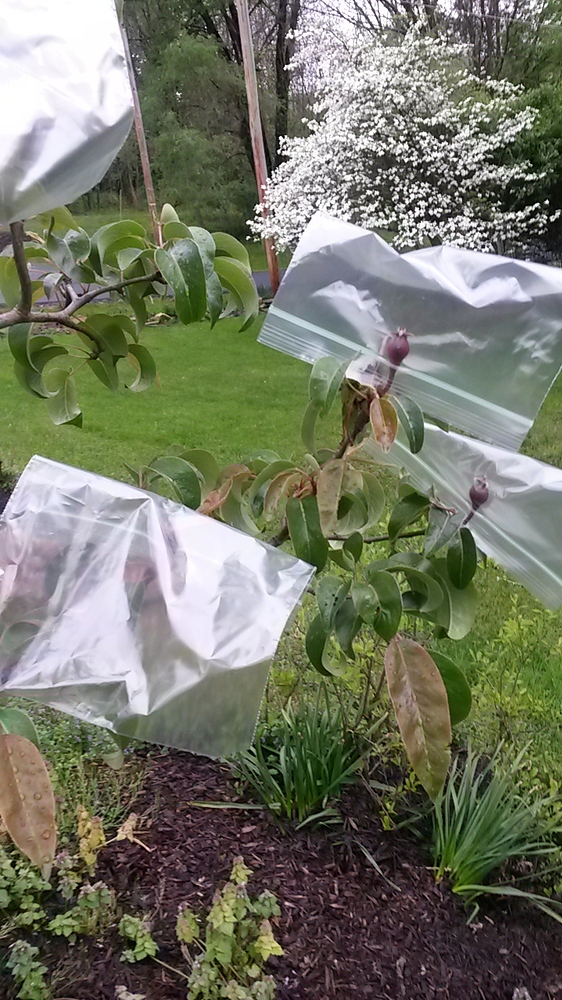 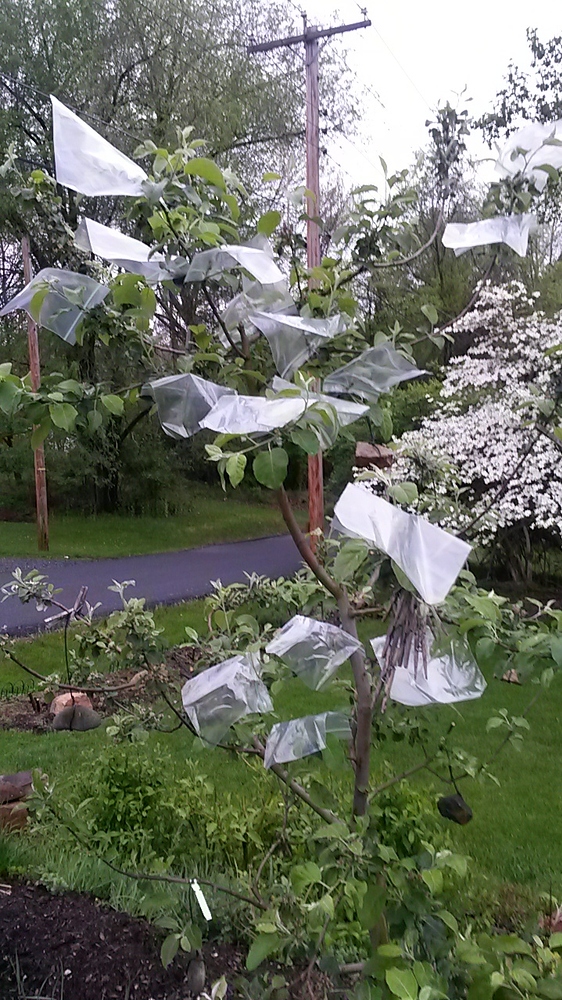 Looking good! My apples haven’t even flowered yet! Hope to have some warm weather for them this week. I’m going to bag some apples to this year.

Just beware that the bags can be blown off by the wind. Last year one good thunderstorm took off almost all of my bags with the apples still inside them. So the bags should be attached to the main branch not to the apple stem.

I get some normal drops every year after I’ve bagged, but normally apple and bag hold tight.

there was a member her that posted what I am sure is a better way to bag. Hopefully he will show up and post his picture again. he cut off the bottom corners of the bags for ventilation Since pests can’t fly into an opening on the bottom theses holes can be pretty big. He also, with scissors, cut in the middle of one side of the zipper so that the zipper would be closed completely and the stem coming through the bag right below the zipper.

I have previously bagged as you did and it actually ruined the fruit. I think the ventilation will solve that, so I am bagging again this year.

The corners are cut off, hard to see in the pics.

those are little baby cuts. he had cut a lot more. 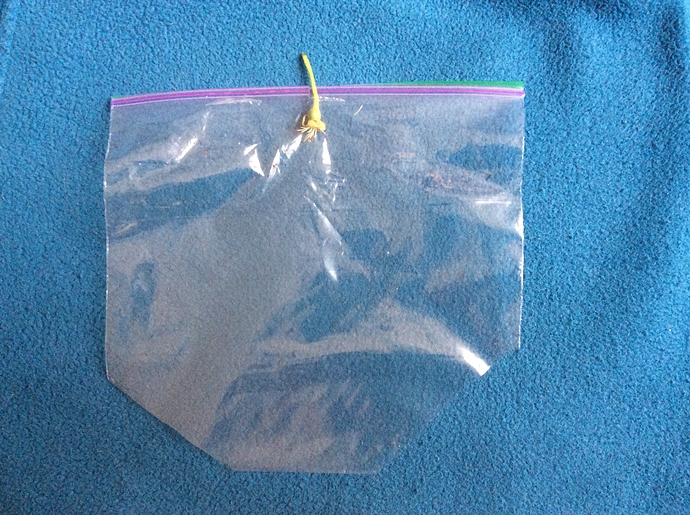 I usually cut the bottom corner quite wide for better ventilation. Except earwigs, nothing go in from the bottom.

Cut a small slit in the middle of ziplock makes the stem of fruitlet fit better and less likely to be blown away.

Earwigs don’t seem to hurt apples, and I don’t know about pears, but they chew on plums - I don’t even try bagging those.

Earwigs have chewed on my apples. Hate them. So ugly.

They look great. Although bagging takes a little effort and time once they get this size all you have to do is sit back and wait until they ripen. Bill

This is my first year bagging

While we are talking about bagging I thought that I would mention that I have also had a lot of drops after bagging in prior years. The only thing I did different was that I waited a few days and let the tree decide which one was the king fruit. This is my best spring in mostly eliminating the drops except for one pear tree that always has a hefty June type drop. About pea size or a little bigger is a good time for me. I had a few damaged by PC but they were just thinned out. Bill

I get a lot of drops, too, like over half of what I bag. I have tried bagging when the fruits were bigger, about 3/4 inch diameter, which produced fewer drops, but more trouble with PC’s, even after spraying with Surround several times right after petal fall. I just use small corner cuts, and punch the center of the zipper with a paper punch. "The cheapo brands of bags with narrower margin above the zipper work best. Most of the bags that went down in the storm probably would have anyway.

We’ve had some gusty winds today, should be a good test!

Pears, I do bag up on the twig, as the stems seem to be more fragile. 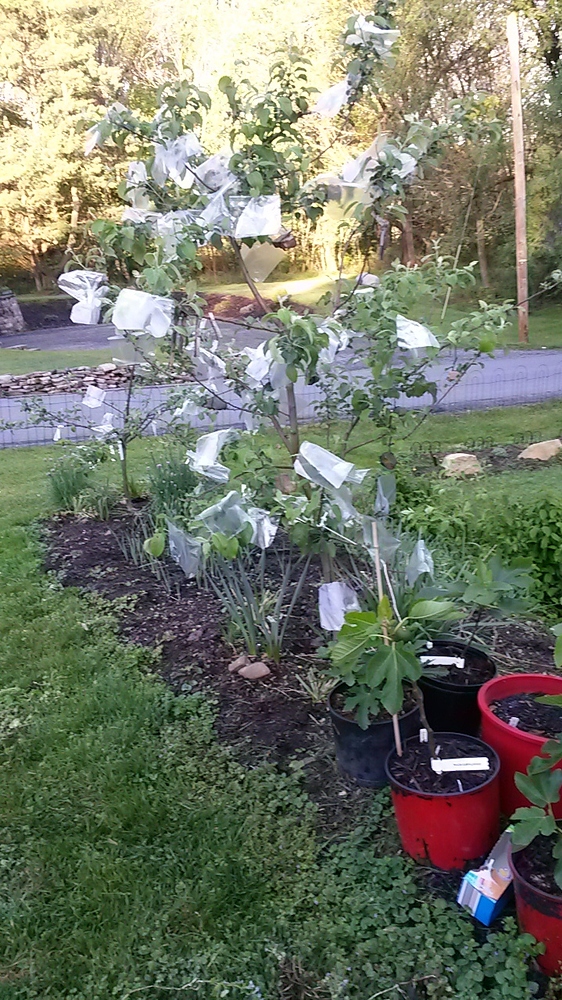 Whew! Done thinning apples and pears. Used 100 bags and ran out (only a handful of fruits left).

I have not bagged pears before as I had too many to bag. This year I have nothing on apples, peaches or plums.

The only trees producing this year are Korean Giant, Harrow sweet and Hosui.

After thinning, Hosui has only 4-5 left, 10 on HS and a lot more on KG. I decided to bag them all so no spray for insecticide this year. 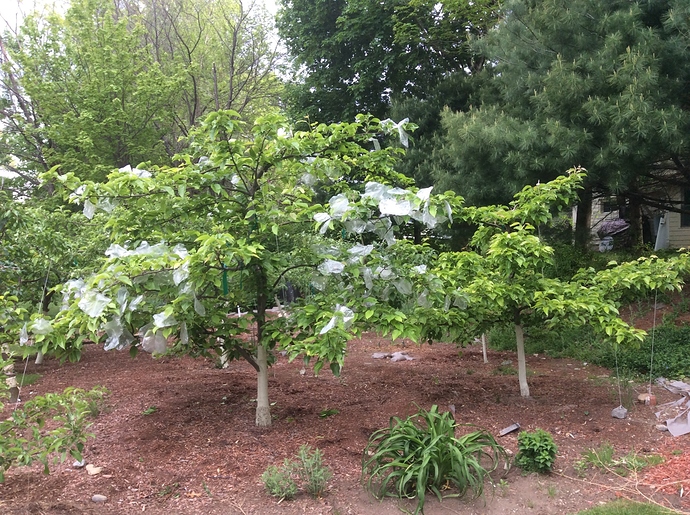 Above is the problem; apple blossoms getting eaten down to little nubs, effectively sterilizing the tree.  No blossoms, no apples.  I was blaming everything from grasshoppers to finches for it, but…