Just started thinning Honey Crisp today. I have had the tree for 10 years. Prior to this year, it had been biennial even though I thought I thinned it well. Last year, I decided I would go an extra mile so I did not wait for the apples to set fruit. I thinned many blossoms out. Tons of them. I must have thinned like 90% of the blooms and later fruitlets out.

It has worked!!! This year, my HS set so many blooms. I broke its biennial cycle (for this year, at least). I have to start thinning them again. Thinning fruit can be quite emotional esp. new fruit growers. Thinning can prevent biennialing, promote fruit with better size and quality.

Have you thinned your fruit yet? How do you do it?

HC with blooms before thinning started. 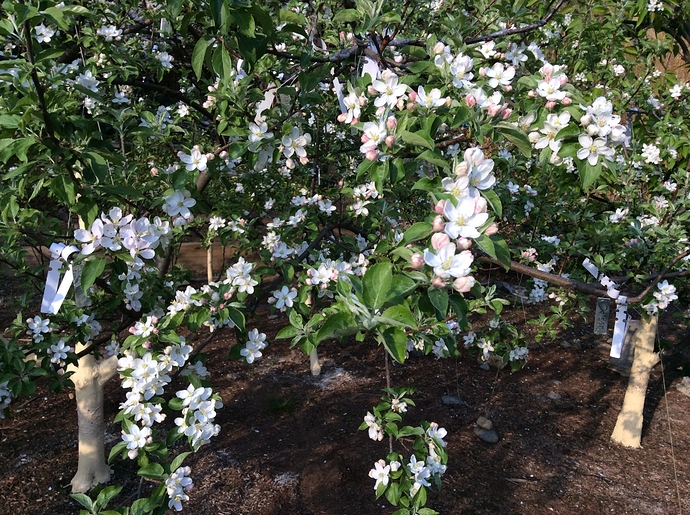 I thinned both unopen and open blooms, whole clusters out. 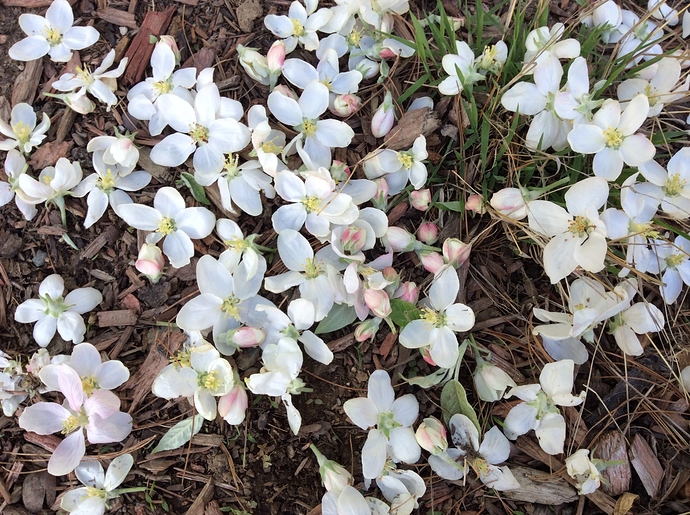 Moley,
I still have 3/4 of the flowers to thin off. Wish you were near. You’d be welcome to take them. I’d make sure it’s organic.

How do you do it?

I wait until the fruit sets and then twist off the unwanted 3/8" or so fruitlets. I use hand-width spacing between fruits, both on the branch and between branches. Thinning fruit can be a lot of work on deciduous fruit trees if the branches weren’t properly thinned during the dormant season.

Wow Mam, I don’t have one out of nine apples in bloom yet!

Almost all my apples are in bloom or about to. I am excited about several new new varieties are flowering this year including Rubinette, Kidd’s Orange Red, Fuji, Alkmene, Golden Russet, Pink Lady, etc. Most were grafted to HC so I have to be careful when thinning so I don’t thin out those precious few!!!

Mrs. g.,
I started thinning some apricots today. There were quite a few twins. I removed all twins. Although everyone of my apricot grafts bloomed profusely, they did not set as many fruit, less than 50% of the blooms. Several tiny fruit turned brown and fell off.

What is your experience with fruit setting of apricots this year?

Is this a typical fruit set of apricot in the northeast or just this year?
@BobVance and @alan, your experience, please?

I’m interested to see how your Alkmene does, as I planted this variety last year. I don’t hear that much about this apple on here that much. My Alky was one of the two apples that did bloom for me this year. It’s on G11 rootstock down by the barn.

Also curious about your KOR, as that was the other variety I was considering before picking the Alky. I wanted to try one Cox-type apple in our orchard.

I have a Golden Russet too, planted two years ago, but it’s struggled. I think it’s in too wet of a spot, or maybe because it’s on G222 rootstock, not a great performer, from what I’ve read.

I’m not sure the percentage of years apricots over bear here (partially because I’m lazy about keeping notes and partially because 25 years of growing them here is an inadequate sample), but many years at many sites they do require thinning and they size up so quickly that it needs to be done before you are really thinking about peaches and everything else that often require this tedious but thankful duty.

I too started thinning mine yesterday, trying to remember if I can be sure the swelling fruit is truly set at this point (yes, not all minds benefit equally from experience!).

I’m less confident this year because my cots against the wall flower 5 days sooner than those out in the open and only the very last of blooms saw any pollinator attention according to my watch. At this point, quite mysteriously to me, it doesn’t seem to have mattered. Fruit is well set from the base of shoot outward- their sequence of flowering first to last.

Cool weather is usually blamed for poor fruit set because of lack of pollinator turnout, but if it is wet and cool, the trees themselves often lack the energy to set fruit. Being against a white wall probably compensates for such weather, as long as it isn’t all grey.

Another interesting thing about apricot pollination is that 25 years ago the literature said they were reliably self-fertile, but I noticed much more consistent cropping from trees located near another friend (variety of apricot). Now the literature, originally based on how the species behaves in CA, has changed and it is believed that in the northeast they benefit from cross pollination. I expect it is because our springs are cooler and more grey, but I don’t know if the reason is even known. Generally we are talking about different varieties as well.

Pears that are not reliably self fruitful during cools springs are known to be where springs are reliably warm, but I’ve read that this is because the trees hold onto seedless fruit when they have the energy to do so (an energy surplus is created by ample warm, sunny days). But I’ve never noticed seedless pears, so what do I know? Anyone out there ever seen a seedless pear?

I grafted Alkmene last year on my William’s Pride and it prompted flowered. I removed the flowered to let the graft established. No surprised that it bloomed again this year. It seems very precocious.

From what I have read, people tend to prefer Kidd’s over Alk but taste is subjective. I may like Alk more than Kidd’s

We’ll see. I am just excited that several of my grafts are flowering this year.

I am wondering about apricot cross pollination myself. One of the grafts, Orangered is all alone on Autumn Star tree and was the only thing that bloomed on that tree at the time.

The.other 6-7 grafts are on an Earliglo nectarine. These grafts are practically next to one another. Of course, they bloomed when weather was colder and flying insects were hard to be seen. All but Robada have not set well, either. Robada set so prolifically on the one-foot tall graft. I thinned to a couple of fruit.

I’m glad you are experimenting with a lot of varieties I haven’t tried and look forward to your evaluations over the next several seasons.

I learned this year that Goldbar is probably insufficiently hardy for our climate as every tree was killed in my Bedford nursery, where I’m pretty certain temps got no lower than -10. Of course, varieties may perform differently as grafts than as whole trees. J. plums seem to benefit from being grafted to a hardier base tree.

If they don’t croak first

Too early to tell! Will keep you posted!

All my apples are done completely, except for a couple bare root trees I planted about a month ago that are now blooming.

Is this a typical fruit set of apricot in the northeast or just this year?

@BobVance and @alan, your experience, please?

It’s hard for me to know what is normal due to them dying all the time. That means that a tree is often either too young to consistently set fruit, or is dying (fruitset is at best temporary).

This year my potential apricot crop is as follows:

There are several “trees” (often re-grafted rootstocks from past dead apricots) which are too young. There is also a 3rd year Montrose which didn’t bloom this year because I let it massively over-set last year.

There are also the dying: 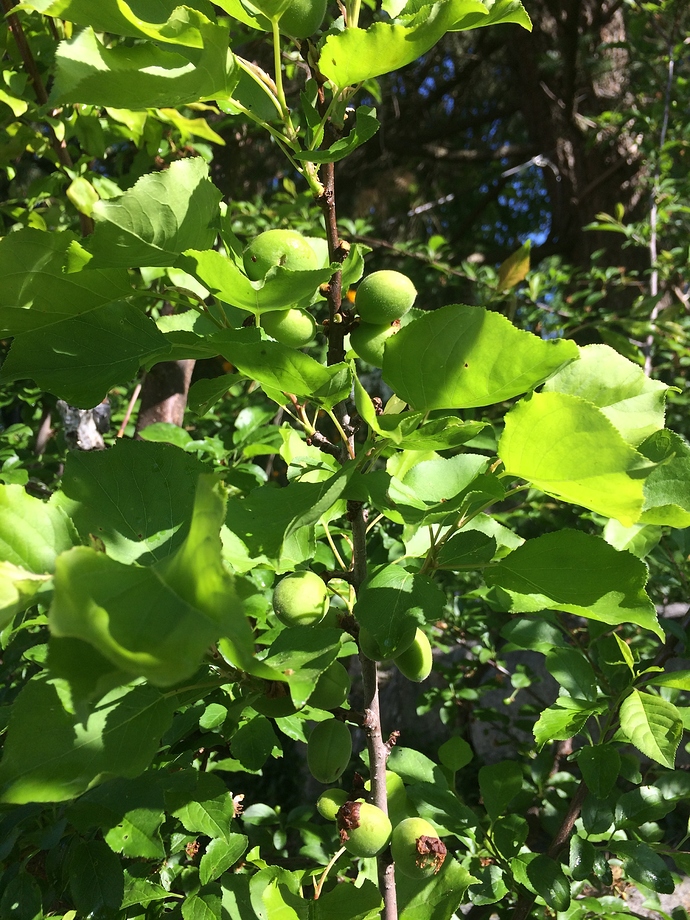 This was before thinning. I thinned off the 5-6 fruit that had PC bites (you can see a couple in the pic), which still leaves a lot for a 2’ long branch.

I did a partial spray yesterday afternoon. Too many other fruit is getting to the point where PC is interested. I’ve seen bites on pears and Asian plums are likely to follow soon. I just skipped over apples. I actually pulled a few pear blossoms off, as there were still flowers on the same tree which had PC bites. 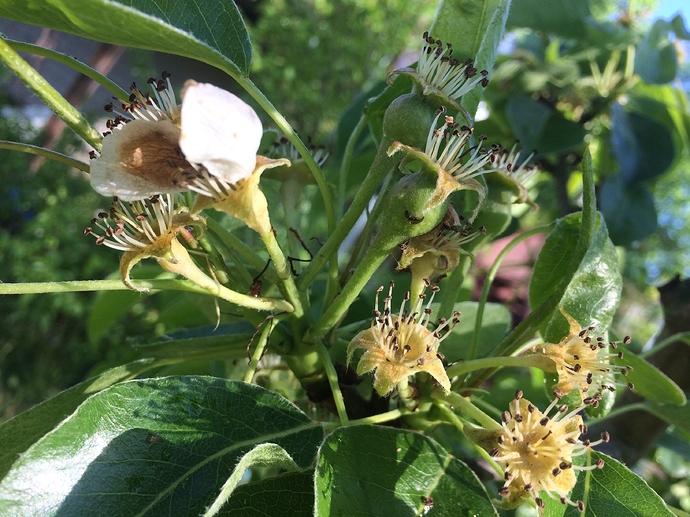 Thanks for your input, Bob. Too bad that a mortality rate of apricot in the east coast is very high.

Which tree is your Amadiocot on, please? I need to try it one more time on a cot branch. I grafted it for two years in a row, four grafts total, on peaches. They did not take. This was with strong, healthy scion and very good cambium contacts and good temp. Must have been a compatibility’s issue. Everything else but Amadio and Stark Delicious did not work on peaches.

Which tree is your Amadiocot on, please?

It’s on a Delight cherry-plum (cherry sized fruit- no actual cherry ancestry). I also have another Amadiocot graft (5/10/16) on a Krymsk 1 rootstock. I checked and it actually set 1 fruit, while the Zard on that rootstock has 2-3.

I have such bad results from apricots dieing that I’m thinking about just making them branches on plum trees. I’m also testing them on other rootstocks, like K1 and St Julian, but am not too optimistic about it given how I’ve had apricots die and the rootstock live.