Kind of a random question, but given the poor results I’m having it’s really killing me to space the few peaches that are going this year out from each other. I was wondering if have very few fruit made it less necessary to put space between the fruit. I’ve assumed that the distance between the fruit is important to prevent bruising and to make sure they dry and don’t promote disease, but I don’t know how much I need to be worried about that versus actually having a bucket of fruit from the yard this year, finally.

The important question is fruit per tree not the spacing. If you have a thin set due to freeze or whatever just leave enough room that the fruit won’t push each other off. Other than that leave the normal number you’d thin to with a heavy set.

The other consideration is don’t leave too many fruit on small wood that can’t support the weight after fruit reaches full size. In that case bite the bullet and remove the fruit towards the branch tip to reduce leverage.

I was really hoping that was the answer. The nectarine only set a small number of fruit, and two pairs are essentially right across the branch from each other, but the other scaffolds are completely bare. I was hoping I can just bag all five or six and keep them all.

I probably don’t have as much experience as Fruitnut in small fruiting trees, but generally w/ stone fruit trees the later growth stages of the fruit are dependent on leaf photosynthesis of the local shoot. So that if you have a shoot overloaded, the fruit don’t get very big.

I’ve seen this on shoots which didn’t get thinned. Lots of fruit really small.

Again I don’t know how this relates to smaller trees. Especially in a greenhouse where there is reflective flooring, ensuring tons of sunlight to every leaf.

We’re probably going to have a lot of people with partially or most frozen out crops this yr. So this is a subject worth consideration.

If the tree only has a few fruit I’d leave everything possible regardless of location.

On years like this it is best to wait to even prune to see where there are surviving flowers. At least this is true in terms of winter damage.

Yes! I’ve been pruning off fruitless wood the last few days (i.e. wood w/ no fruit set). As a general rule I’ve not thinned anything so far. If a shoot, no matter how short, has fruit on it, I’ve been keeping it (there are some trees w/ so few fruit). Eventually though I plan to come through and thin stuff. It’s been a while since I’ve had trees thinned by frosts so much, but my recollection is that branch space/fruit unfortunately still comes into play, but I suspect we are saying that can come under consideration much later in the season w/ such thin fruit set.

“I’ve been pruning off fruitless wood…”

In the immediately prior post on this thread you said …

[quote=“Olpea, post:4, topic:5362”]
“…later growth stages of the fruit are dependent on leaf photosynthesis of the local shoot.”

So… ( pesky question coming)… Would it not be better to just leave the non fruiting wood so its leaves can supply energy for fruit growth and to prune them off later when we need the light to help ripen fruit?

So… as to heavily laden shoots, for us backyarders who don’t have a huge number of trees, instead of pruning them off, would it not be better to just pick off the individual fruitlets when they are still tiny and leave the leaves for later by the same reasoning as in the last paragraph?

I just came back from surveying my orchard and was surprised at how
variety specific the frost damage was. Some trees are loaded and will
require usual thinning, while others were heavily thinned by the frost.
I’ve decided to delay thinning this year, until after all natural thinning
has stopped and will let the fruit reach a larger size than normal, before
I thin by hand.The earlier ripening varieties seem to have more fruit, than
the later ripening varieties, yet they all bloomed at the same time. Go
figure.

I’ve decided to delay thinning this year, until after all natural thinninghas stopped and will let the fruit reach a larger size than normal, beforeI thin by hand.

Ray, i’ve used this line of thought too (mostly out of my usual indolent procrastination!) and I’m not sure I benefited by it. I’d like to hear from others on their experiences/thoughts.

I wanted to wait for the “June drop” so I could avoid all that work, but I think that in my case I was letting the trees (apple and pear) get the wrong idea. Better, I think, to get those fruitlets off of there and let the trees put their energy into the remaining fruit and leaf production.

After a frost/freeze, If a flower still looks fine, it is fine? or still wait and see?

Mark, The only thing I really heavily thin are peaches. Everything
else is really lightly thinned, if at all.

Ray,
Don’t now if you have A.pears. They require serious thinning. I’ve never waited for June drop. In my experience, I thin aggressive when fruit just started to form (I talk about peaches, Shiro plums and A.pears). I think that’s why I don’t get as many June drop as I have heard some people here have mentioned.

I think it’s harder for people to thin aggressive when fruits are very small because the trees looks bare. However, after a few weeks, you’ll realize that you’ve left too many fruit on and have to thin out more sized-up fruit. To me, this is when I see it as we let the trees waste their energy to size up the fruit…

No thinning or delayed thinning is going to reduce final fruit size and/or fruit quality. As well as risking tree breakage.

I also have very little June drop because I thin early.

Mike, typing from my phone, so excuse.

I’m not sure I can wrap my head around your very good questions, but I’ll offer a few comments.

When I mentioned peaches are fed locally by their shoot, I mean that fruit naked shoots don’t contribute anything to fruitful shoot.

In fact the leaves of individual shoots feed the peaches downward. A peach at the very end of a shoot will not grow very big, if there are no leaves at, or in front of that location.

I saw the DW videos posted. They are fine in very fruitful years. I do more thinning cuts than Tom Spellman, but that’s a minor point. Also I thin heavier, but again not a big deal. I don’t think he was trying to make a perfect video, just kind of a general guideline video. I’ve done the same and they turn out far from perfect.

I think Ray has the right idea to thin later this year for those of us who suffered frost damage. At about thumbnail size we will be able to tell what fruit will abort and what looks good.

Peaches are self pollenating but still require decent weather, so not all fruitlets out of the shuck make fruit. Fruitnut had an excellent post about this a while ago. 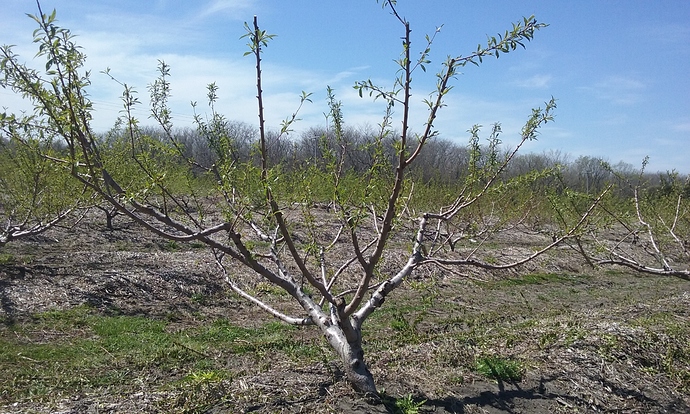 I’ve been pruning off all the unproductive wood, probably more than recommended. This is a 28-007. Did very poorly with the frosts, so I may remove these trees anyway. I think there are about 40 viable fruitlets on this one. Should be 300 for the amount of wood left on the trees after fall pruning.

Or am I missing something?

That’s a good question, Mike. The reason you don’t do what you describe is that healthy peach trees grow too much and all that portion of the shoot devoid of fruit will only shade out the productive portions of the tree.

Healthy peaches really grow like weeds. I know that’s a cliche’, but think of a really fast growing weed like a sunflower, which grows 6 feet, or taller in a season. That’s what peaches are like. So you have to manage sunlight or you get big dead zones down lower.

Believe it or not, but the tree pic I posted before will not be recognizable at the end of the season. It will look like a full lush tree.

I hope this makes sense. The reason you don’t leave unproductive wood is to manage sunlight /shade.

Btw, I would never leave 8 peach fruit on a 20" shoot. That one deserves 4 at the most, probably 3. But I know you were just using the example as a hypothetical.

When is the sunlight critical to the fruit? I figure more towards 2/3 of the way to ripening. That is why I said that the “childless” leaves be pruned out later.

Impractical for commercial growers but was wondering if that would make sense to backyarders.