My third leaf espaliers are coming along. There are 7 total trees, one of them a replacement tree for one I killed last year. The new tree is King David on G222, and is doing fine, but started out very small. Here is is picture of it earlier in the season with a nearby oriental poppy. 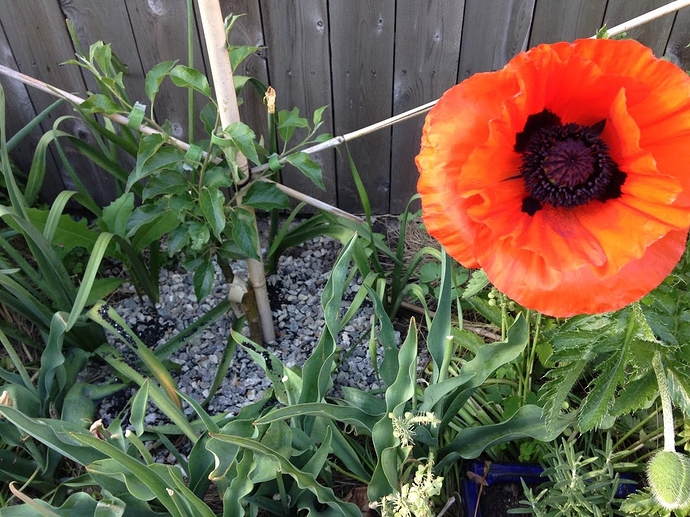 In early spring I pruned a little but not much, having kept unwanted growth in check via pinching last season. Then as the trees started growing, every couple days I walked past and pinched almost all growth off at ~3 leaves.

This year I grafted on these trees for the first time, adding 6 new varieties mostly by cleft graft along with a couple whip and tongue. They all took and were growing well (until a week or two ago, more on that below).

Goldrush flowered for the first time this spring and set a ton of fruit. I took most of it off since I wanted the tree to focus on making more tree instead of fruit, but I left on a handful (still haven’t actually tasted Goldrush). I put Centennial on the top of this tree, to hopefully grow up and make the top two rungs. 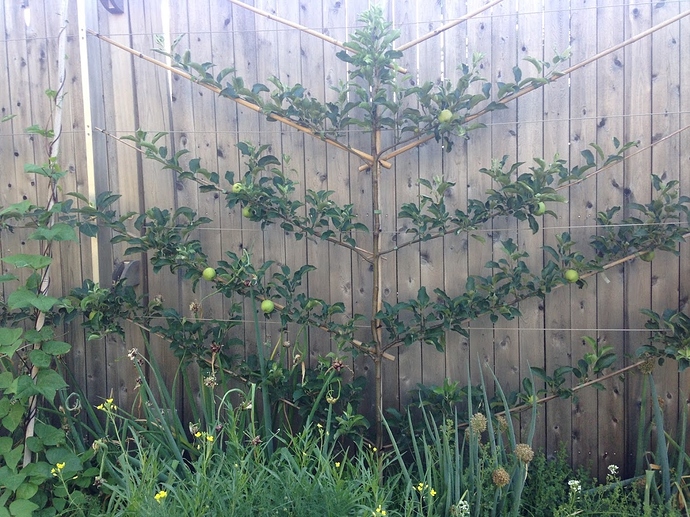 Rox. Russet was allowed to keep some fruits too, but only a couple since the tree is still pretty small and not growing as strongly as I’d like. Grafted on top is a scion from a probable seedling in Five Islands, ME, which makes clean, delicious little russets from a totally unmanaged tree. 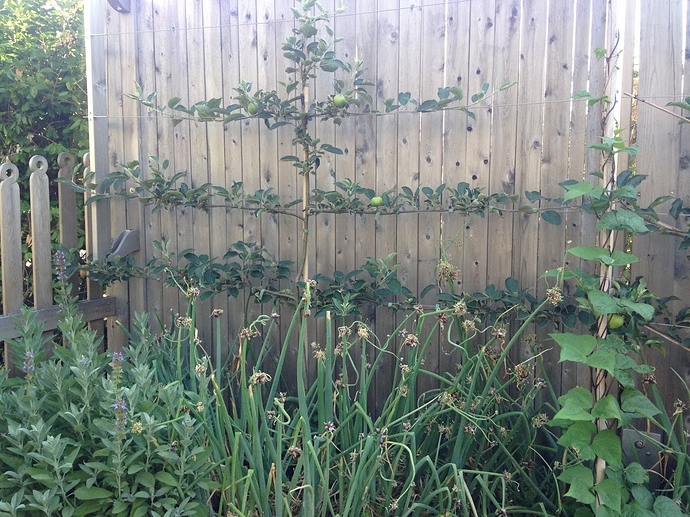 Sweet Sixteen is the bushiest, healthiest looking tree this season, though it has yet to fruit. It is on G.30 roots, and wants to grow thick wood. I grafted in Bramley’s Seedling to both sides of the third rung and it is looking good. 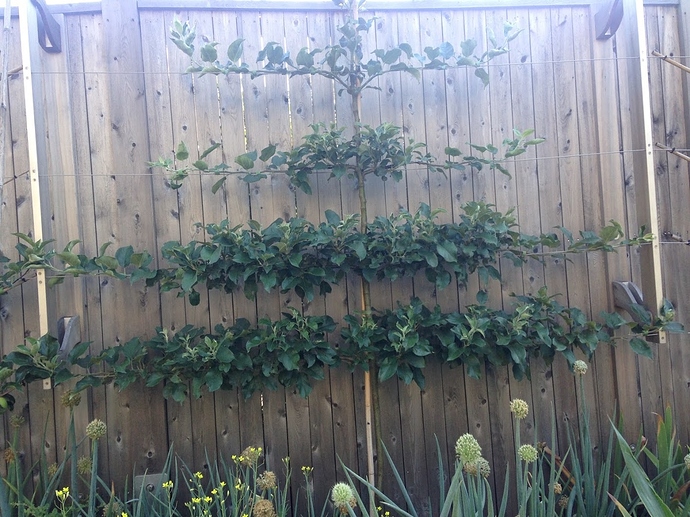 Ashmead’s was damaged last year in it’s G.11 interstem piece, so I tried inarching a piece of G.30 rootstock from the ground into the Ashmead’s. 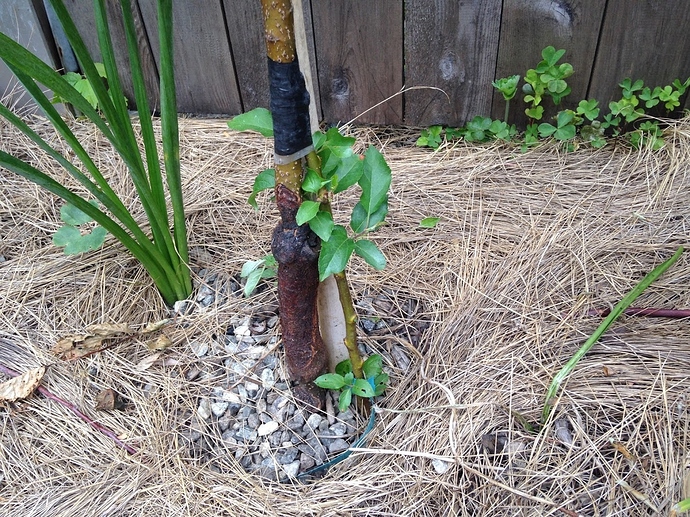 We’ll see how that works out, but the tree is still showing low vigor. It put on a bunch of fruit but I took it all off so as not to put undue stress on the tree. I did graft in Chestnut at the top, to grow up into 2 or 3 rungs.

Tydeman’s Late Orange is doing ok, no fruit yet. 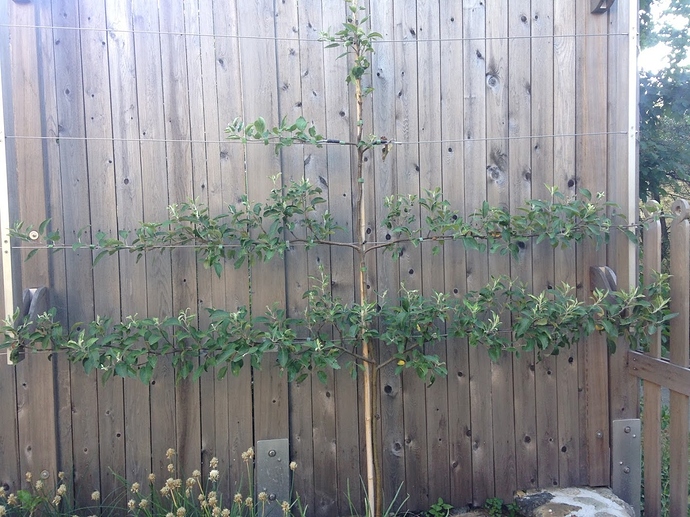 I grafted in Karmijn da Sonnaville on rung three and it was growing well, but then the right side of the rung just withered and died after growing out like 20cm. Not sure why, but there is a new shoot growing out of the stub I grafted to, so I’ll probably try that again next year. 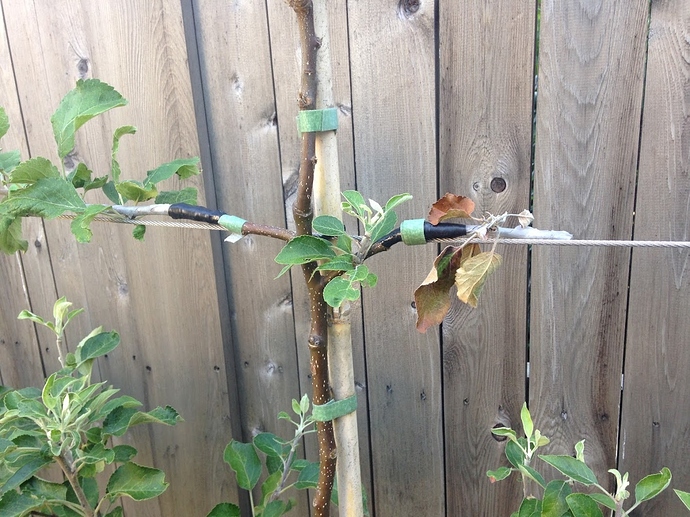 Opalescent is the second best looking tree, and is on B9/B118 interstem. 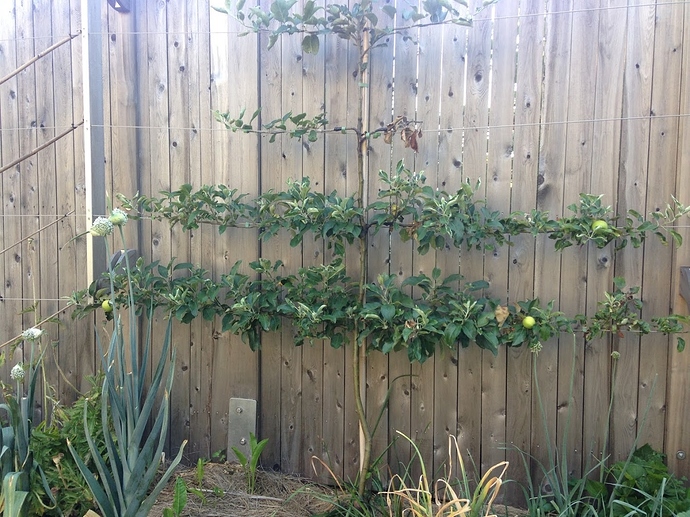 It set some fruit this year and I let it keep a couple, wanting to finally taste it for the first time. But I think there is a serious problem with this tree! On rung three, I grafted in Calville Blanc d’Hiver. Both sides grew out quite a bit, but then the right side withered and died. 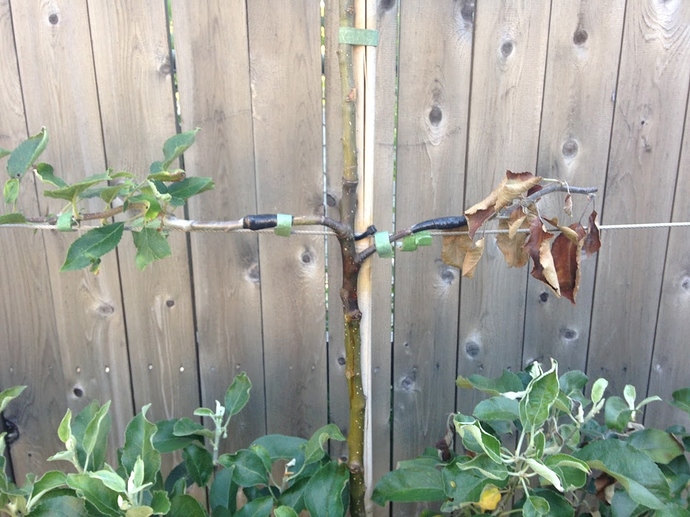 Not just the graft, but all the way back down the stub to the main trunk. And now that whole section of trunk is discolored and dark. It is either leaking some kind of juice, or maybe discolored some rain water that washed over the trunk to form some tracks below the section. I scraped the bark here with my thumbnail; it was tough and didn’t look green underneath like healthy bark. Though it wasn’t totally dried out either. 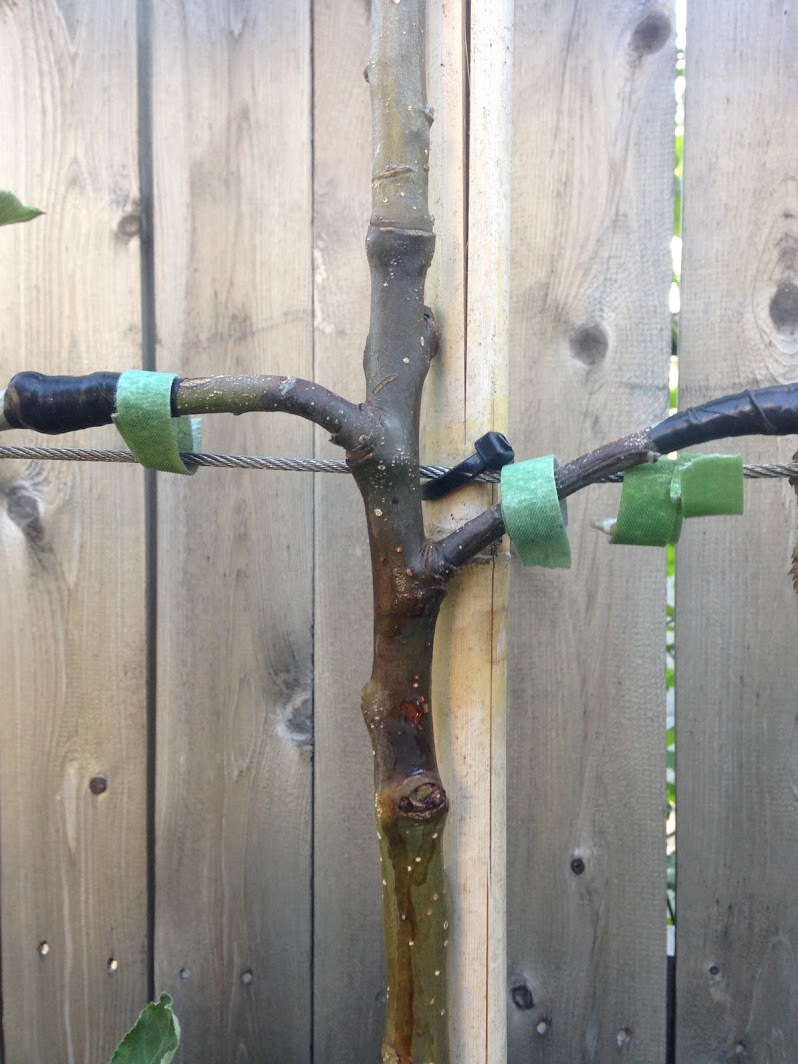 Then I looked around the tree, and was sad to see that the junction of the branches on rung 2 to the trunk has a similar appearance. Ugh. 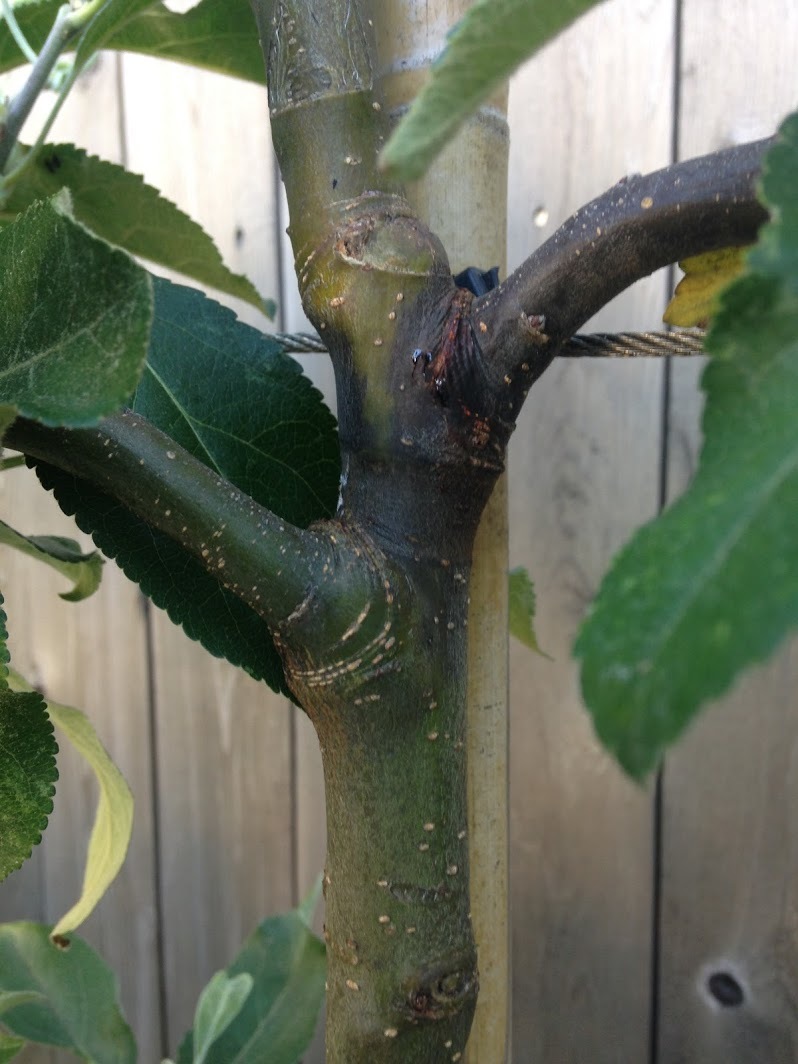 Any ideas what could be the issue with this tree? Some kind of canker? Suggestions on what to do? Apply some treatment? Radical amputation? Ignore it?

Man, those are some fine looking espaliers.

Any ideas what could be the issue with this tree? Some kind of canker? Suggestions on what to do? Apply some treatment? Radical amputation? Ignore it?

Could be fire blight. If so the first line of defense is radical surgery. It can be easily spread by pruning shears. So if you go after it sterilize between every cut.

Those are some great looking espaliers.

Those last three pictures, though, really do look like fireblight.

Looking at pictures on the web, it does look a lot like some of them. Burford says Opalescent is Very Susceptible to fire blight. Dang! It’s going to be painful to cut the whole tree above the first rung off…

For some reason I didn’t think fireblight was a big problem around here. Ah well, live and learn. At least I’ll hopefully eat some Goldrush this year.

I also thing it’s fire blight. The scionwood could have been infected with the bacteria waiting for a perfect condition to strike.

Did the condition when it happened match the info in this article?

Other than the probable fireblight issue, those are some very neat and beautiful espaliers.

Don’t fret about the radical surgery… re-growth will be quick and just think of the challenge of creating another Frankentree.

Kudos on a Great & Beautiful display.

Concentrate and enjoy the successes and the disappointments will…fade… away.

Thanks for the advice and compliments everyone. It showed up first at the newest growth on a couple of the scions I grafted in this year. As @mamuang said, probably came in with the scions. Strangely enough, I first noticed it during a pretty long dry and hot spell (by Massachusetts standards) we had during June, not the weather you think of as being conducive to developing diseases. Maybe the stress of low water gave it more of a foothold? Or maybe it started earlier and I just didn’t notice. Now anytime I see a withered or dead leaf I am going to be feeling nervous!

In retrospect maybe I could have halted it earlier with less damage if I knew what I was looking at. It is interesting how the two affected trees fared: On my Tydeman’s Late Orange, it killed the scion back to the graft, but did not continue back into the stub or trunk, and did not get on limbs below it. On the Opalescent it went all the way up the scion, down the stub, and into the main trunk. Also seems to have gotten into the two rungs below it as well as the trunk to rung junction area on rung 2 (infection started at rung 3). I think a little bit was showing on the Sweet Sixteen nearby too, so I cut off the suspect side twig to try to head it off. Washed pruner blades with ethanol between cuts.

Here is a pic of what I have left after cutting

It took me a few days to get emotionally ready for doing the deed. Given the proven susceptibility of Opalescent to fireblight, I am not that excited to try to regrow the espalier with it. So I think next spring I’ll probably chop it at the graft to the rootstock (it’s on B9/B118 interstem), and graft on something disease resistant to grow up as the main framework, grafting on other varieties to the side rungs as the trunk grows up. 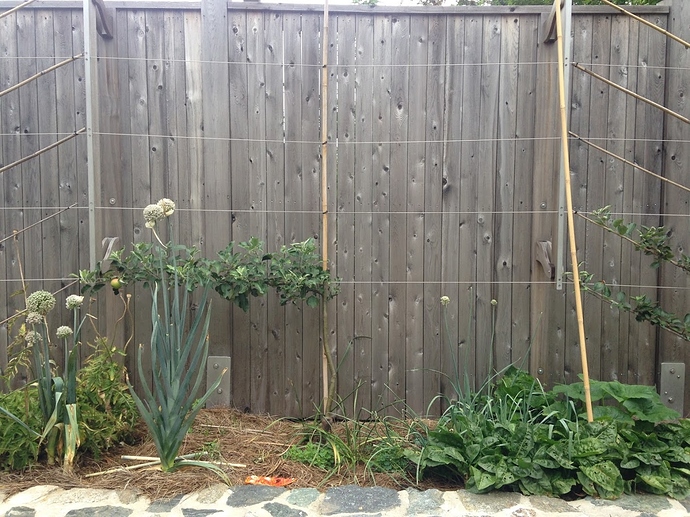 Holly,
Sorry to hear about the fire blight infected grafts. I grafted so many this year. I am a bit nervous.

The varieties you have are quite unusual. What do you have in mind for a replacement variety?

I will be back! It won’t be the same, it will be better!

@mamuang -
I’ve come round to the opinion that I would have been better off starting these espaliers all with something disease resistant on one rootstock (non-interstem). I had a little spreadsheet where I entered resistance to fire blight and CAR if I could find them on the varieties I was interested in. Out of those, Rox. Russet was listed as very resistant to both fireblight and CAR, and King David also was listed as being resistant to both. So I’m thinking I’ll try grafting that onto the top of the interestem rootstock next spring to be the new skeleton. Then in future if a particular variety gets infected, at least it won’t take out the whole tree. Plus I have both RR and King David, so easy to get scions. Then I’ll graft on my other desired varieties as the espalier grows up and out.

I have a spreadsheet where I have planned out what varieties I’d like to see on all 7 of my trees (35 rungs total). At this point it could be considered mostly a form of daydreaming and I change it around frequently, but in the current plan for that tree location I’d like to have:

You did a great job.