Found Shinko Asian pear at Kroger for $20 is it worth growing in Kentucky and is it self pollinating?

For what it’s worth, I’ve had one in ground in Rockcastle County for a few years. No fruit yet—but that’s not its fault; it’s the late freezes. Despite the uncooperative Kentucky weather, it shows signs of precocity: it just loves making spurs. It might just be my particular growing conditions, but it’s the smallest, slowest growing Asian pear we’ve got—and this does jibe with this South Carolina study which found it “the least vigorous” of seven cultivars trialed in that state on P. betulifolia stock (mine, if I’m remembering aright, is on OHXF 87). Along with “Olympic”/“Large Korean,” it has a reputation as being one of the most fire blight-resistant Asian cultivars; I’ve yet to see a strike on mine. (It was the most resistant cultivar in the SC study.)

No pear, as far as I’m aware, is strongly self-fertile… Any pear (with non-sterile pollen) that blooms at the same time should pollinate it. Orange Pippin Fruit Trees lists many (but by no means all, as their pollination compatibility lists are limited to their catalog) compatible pollenizers here. Even nearby ornamental callery pears, if bloom time overlaps, should do the trick.

I’ve had it for years, down here in Hoptown; one of the first Asian pears that I planted 25 yrs ago.
I’d lost it to the tennis court we put in in the early 2000s, but a friend sent me a replacement on Callery rootstock - from scions I’d sent him a year or two earlier… has grown like a rocket, on callery - was slower growing on the original Harbin pear understock.
Big, tasty pears, Latest-ripening Asian pear that I have, very productive. For 20 bucks… you can’t hardly go wrong with it. Self-pollinating… IDK… but I have numerous other pears. You could always graft in a branch or two of a suitable pollenizer, if you only have room for one.

I like it. There is some information about my experiences with it at the end of this thread.

Calvin, appreciate the additional information. I write down the?approximate harvest date for my reference

Shinko has a strong flavor- more intense than most. A light brown skin- not a very large fruit, but I like it.

Thanks for the responses for a six foot tree for $20 bucks I think I’m going to give it a go.

Shinko is the largest-fruited Asian Pear I have grown - except for Korean Giant, which never set more than one or two fruits per year… so those would be huge, juicy, flavorless things… like eating a raw watery potato. I’d guess that most of my Shinko pears last year averaged no less than 4" diameter… some larger.

I think they’re fantastic. One of the only Asian pears I’ve eaten & off a tree at Red Fern Farm in Wapello, Iowa. Here I am holding (3) of them. My hand is 7" long and skinny fingers, not a large hand. 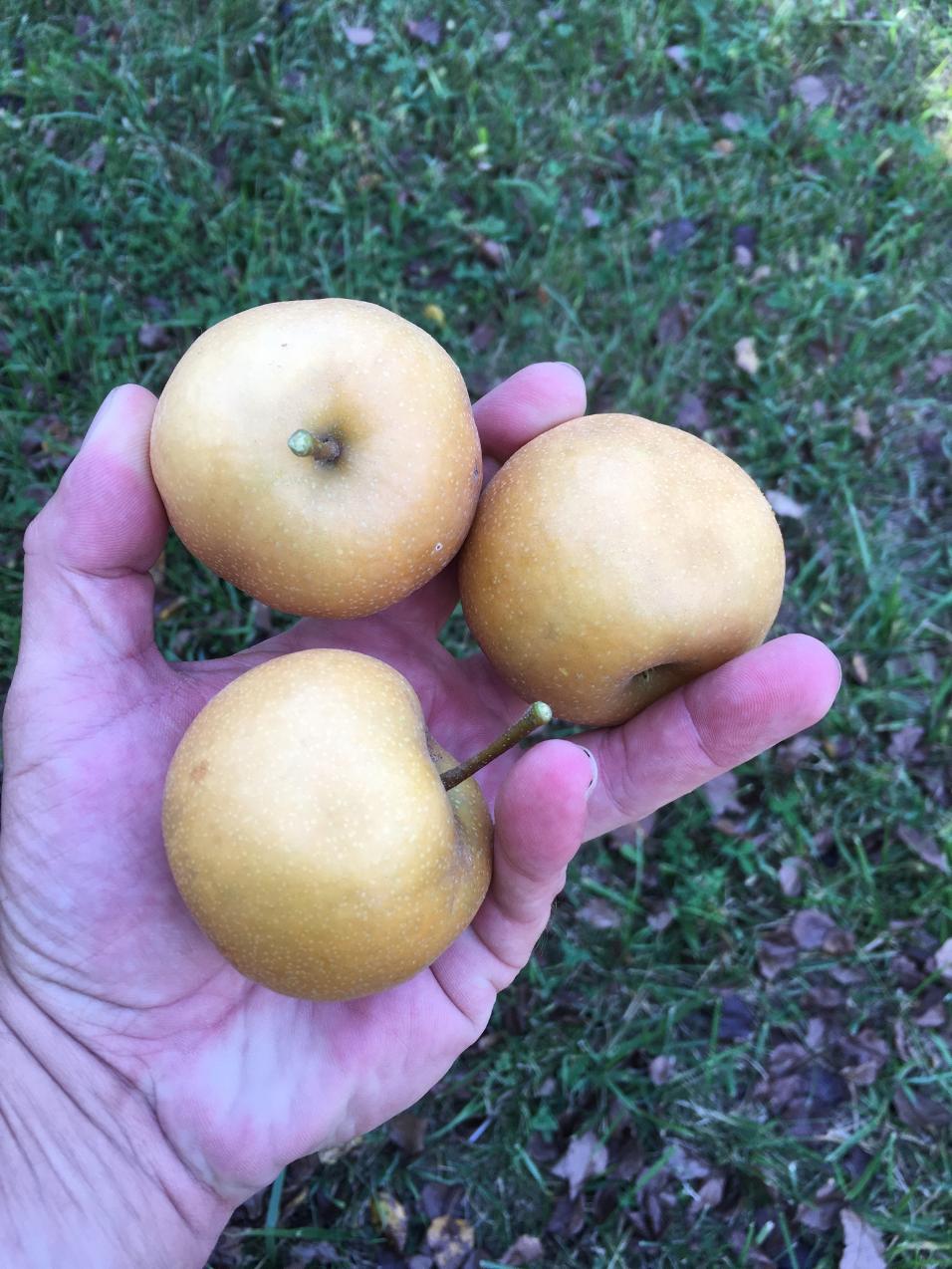 recommended in this Kentucky guide