Tired of losing your crop every year to late freezes? Try a wind machine!

If yoyr tired of losing your crop every year to late freezes you might need a wind machine. Weather patterns have been very unpredictable and some growers are losing their fruit every year. If your one of those growers facing bankruptcy maybe you have not yet considered a wind machine. 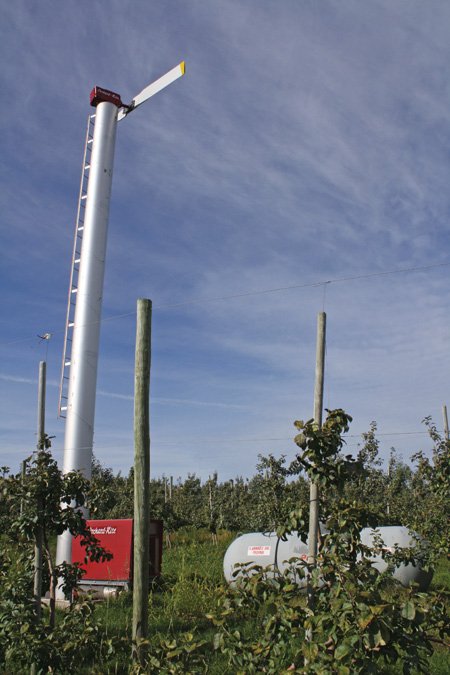 "David Rennhack says wind machines saved at least a part of his crop last year. He had three machines, but after the freezes, he bought five more.
Photo by Richard Lehnert

Wind machines have been a skyline feature in orchards and vineyards in the Pacific Northwest and California for a long time, but now they’re sweeping into apple orchards in Michigan and New York at a rapid pace.

It’s not a case of locking the barn after the horse is gone. Yes, growers in the Midwest and Great Lakes states were hurt badly by freezes in April 2012, but they were making the move to wind machines even before that. Increasingly, growers realized they had to protect the ever-costlier ­investments they were making in new, modern orchards.

Apple packers and sellers were telling them they needed a stable crop of apples every year if they were to market them effectively. The graph depicting Michigan apple production over the years looks like the teeth of a saw, spiking up and down.

The uneven production problem has been getting worse, not better—the spikes are more pronounced—so growers are looking toward freeze protection, and predominantly, they’re choosing wind machines.

Howard wouldn’t say how many wind towers the company has sold or installed—“a lot” was his description. But at the start of the new year, ­Cascade was to open a sales and service operation in Caledonia, ­Michigan, to provide service support to growers in the East. They have two such ­service centers in both California and Washington now. Orchard-Rite has dealers in Ontario, Canada, the Southeast, and in foreign countries.

Howard said growers from the eastern United States had been flying to Washington all last year to look at the Orchard-Rite plant and visit Cascade Wind Machine ­Service.

To get an idea of how growers are moving, consider the case of David Rennhack, a grower in Hart, Michigan. He put in an Orchard-Rite wind machine in 2008, added a second in 2009, a third in 2011, and then five more last summer.

“It costs too much money to grow fruit these days not to have a crop,” he said. “We’ve been moving to a lot of high-quality varieties of fresh apples, and to keep your markets, you’ve got to keep your packers supplied.”

Rennhack has been growing fruit for 30 years. His farm is virtually in the city of Hart, and his family operates a farm market right on main street just a few hundred feet from the orchards. They sell apples, peaches, and cherries, and also grow and sell vegetables—sweet corn, ­melons, and pumpkins. In recent years, he’s made dramatic changes on the farm. He’s taken out most of his tart cherries—and will eliminate the rest—and is planting more apples and sweet cherries. He’s torn out most of his older apple varieties—the Jonathans, McIntosh, Empires, and Idareds—and now has 70 acres composed mostly of three high-quality varieties—Honeycrisp, SweeTango, and ­Jonagold.

In 2008, he began making 4- by 12-foot plantings, using the tall spindle design and trellis on all new ­plantings.

Less than 10 percent of his apples go through his retail market. The rest are packed by Applewood Orchards in Deerfield, Michigan; by Pepin Heights Orchard in Lake City, Minnesota; or are sold to Peterson Farms in nearby Shelby, Michigan, which makes and sells fresh slices.

“I’ve seen 30 to 35 wind machines go in here in Oceana County in the last four or five years,” Rennhack said. “The majority of them are Orchard-Rite. The service is really good.

“After farming here 30 years, I know where a lot of my freeze damage occurs,” he said. Still, he relied on Cascade to advise on the siting of the machines. The shape of the protected area is egg-shaped, he said, because prevailing wind and wind drift alters the shape from what should be a circle around each tower.

Last spring, with three machines providing some protection, “I know we saved fruit. We could see the edges where the fans protected. It was pretty brutal. We had temperatures in the low to mid-twenties.”

Despite the freezes, Rennhack had some fruit—much of it with a poor finish and frost scars—but fruit nonetheless. As a result, he was selling his own Honeycrisp apples at his farm market—something most other Michigan farm marketers weren’t able to do.

The 2012 freezes were a mixture of convection and advection types, coming with cold winds and not providing much of an inversion layer from which to pull warm air. Despite that, the fans offered some protection. “I know we saved some fruit; it was not as bad as in 2010 in the orchard with the new fan,” he said.

Rennhack had tried other frost protection methods in the past. He had cold air drains, but sold them all. They ­didn’t do much for him, he said. “I also had a tractor-mounted fan, but I could never see that it helped much.”
•