To prune or not to prune 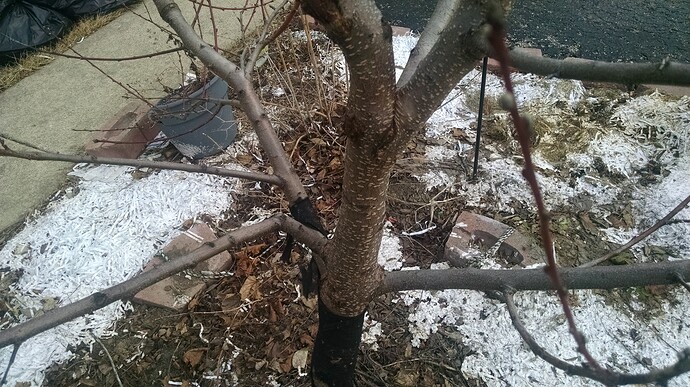 4320×2432 4.35 MB
This is my July Elberta peach, 4 years old. This big branch on the right side , I think crotch angle is less than 45 degree, should I prune it off? If I should, the branch on the left is pretty big too, which will make the tree imbalanced. Should I just prune off both branches to make the tree balanced? I do have 4 smaller branch with good crotch angles at lower the tree trunk which can be good scaffold branches too. The thicker the branches get, the harder for me to cut them off.

I’d get rid of that V crotch in the center and balance the tree up. Better now than after it splits out.

Fruitnut, to cut both branches right? It is a major surgery, I need a anesthesiology to numb my heart

Not 100% sure. Pic is kinda close but it looks like one cut above those lower branches would do the job.

OK, Fruitnut, Thanks for the advise. I will show before and after pictures. The cut will take off big half of the tree. I better do it before it bloom, or I can’t cut seeing all the flowers. 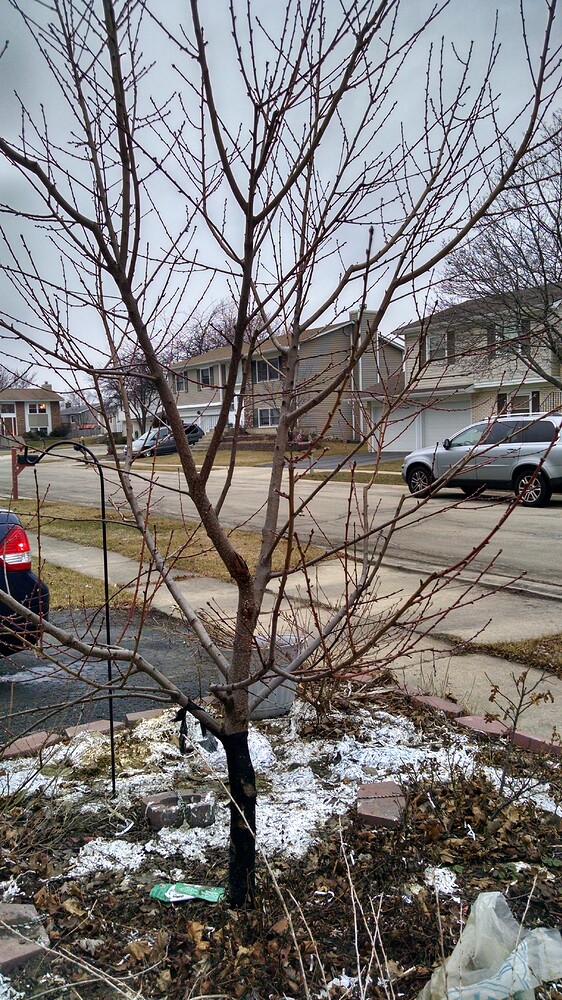 Took it this morning

That V does look like something that may want to split out. Man…I’d hate to do it though. I personally wouldn’t cut it just because it’s right there in front of your house and will look like Hell.
I’m not saying it isn’t the right thing…I just wouldn’t do it.

If I cut V to the next lower branch, I will just get a lower, 7’ tall, more spreaded tree; If I leave the V there , I just have a 10’+ tall , kinda semi central lead tree. I want the tree there just to block the wondering eyes into my ground level window when they walk a dog or something. But either way, will serve the purpose.

You can keep the V if you tie those two upright branches together so it can’t split. They are about the same size and will balance each other. Otherwise cutting above those 4 lower branches will give a stronger tree. It will fill in pretty fast if cut back.

I agree with Fruitnut. I’d cut out the V. It will give you a stronger tree
with a true open vase, and better fruit production.

Fruitnut, I cut the Y off. I think it will be a problem years down the road. 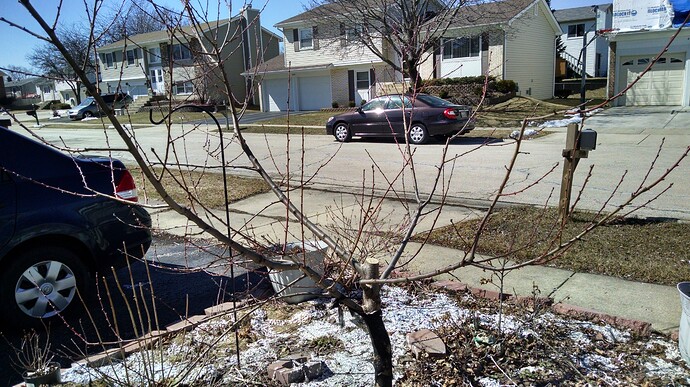 Looks good. I think that you made the right decision.

Thanks, maineorchard. It is a hard decision though.

I’ve never made such a decision that I’ve regretted down the road, it is the questionable branches I leave that torment me endlessly. Prune with ruthless but mindful concentration. Your trees will reward you for your courage.

The tree looks good, now some normal pruning. Cut back the remaining scaffolds to outward facing bud, just a little. Remove any inward pointing shoots to keep center open. Any crossing branches eliminate one. This is going to be a fine looking tree! I like the open vase look. Everybody has central leader trees.

Jellyman always advocated open center trees, no matter the species. Over time most trees pruned for fruit eventually become open center but it is a fine shape from the get go in home orchards no matter what the species. For peaches it’s almost necessary.

I train all trees to a central leader at first because I tend to need a long straight stretch of trunk before first scaffolds. Gotto keep the branches above the critters. Also it is very convenient to have a continuing trunk when you use branch spreaders.

I’ve made many trees look like the finished peach in the photo when converting a tree to open center that started as a central leader.

The reason central leader trees are so widely recommended is only because it can increase yields somewhat with free standing trees. It is the most efficient use of light. For home orchards a few bushels less an acre is absolutely meaningless.

, it is the questionable branches I leave that torment me endlessly. Prune with ruthless but mindful concentration.

So true, but hard to do.

I have to say, I think the open center on that particular tree was the right thing to do. You could clearly see the bark inclusion on the V, and that’s just a split waiting to happen. Your tree will rebalance itself and be the better for it.

Bad wood just prevents good wood. Once I gather the courage to remove it I generally am pleased with the results.

Hi, gentlemen, Thank you all for the encourage and good words. I knew that branch needs to be cut off soon after the branch grew out of the trunk. But as marknmt said, it is hard to do… first year’s excuse was the whole tree is too young, let it grow some more branches first then cut the narrow crotch ones… second year was there are some flower buds on that branch that might fruit… the third year was there are a lot of fruits on that branch, maybe cut if off after fruiting… then the fruits on the branch save it every year so the branch stayed till now… The crotch angle is too small, eventually will become problem, so this is the year it needs to be cut, boy, I am happy I braced myself and get the saw out. The tree looks more balance now. I will post a picture towards summer/fall to see how the tree grows.

yep…it looks good. I think your decision to remove the entire Y rather than one leg of the V was a good one.