I have started to notice claims for high yields and disease resistance from grafted tomatoes. Have any of you had experience with growing or grafting tomatoes? It seems to be somewhat similar to grafting fruit trees just smaller. Rootstock seed is expensive and a bit difficult to germ if my base research is accurate. Any comments or advise is most welcome.

In disease prone areas there have been successes with organic gardeners grafting vigorous tomato cultivars onto naranjia rootstock. Also, the retail garden industry is experiencing increased sales to novice gardeners whose failures in previous years were due to lack of experience. Growers (especially commercial) in the southwest have not experienced benefits because the disease pressure is relatively low.

We are definitely seeing more grafting of vegetables all the time Can't grow watermelon but can grow pumpkins?. I think grafting tomato makes a lot of sense! These are the clips they sell https://www.amazon.com/Davids-Garden-Seeds-Grafting-D9032A/dp/B00EIQT7XI/ref=sr_1_1?ie=UTF8&qid=1481026151&sr=8-1&keywords=tomato+grafting

I ordered a few grafted tomatoes last year. It’s hard to say whether they did better than a non grafted version of the same plant would do (I didn’t have that to compare), but blight still hit the lower leaves and traveled up the plants like it did with most of my varieties by late summer.

I did graft and grow some tomatoes a few years ago. They might have been a bit more disease resistant then regular tomatoes, but not enough so to make it worthwhile using them again.

I am hoping to try just a handful of grafted plants this year. I like heirlooms like Brandwine, Cherokee Purple, etc. so it would be nice if grafted plants of those had extra vigor or disease resistance. For those interested, Seeds N Such offers rootstock seed. https://seedsnsuch.com/?s=rootstock&post_type=product&type_aws=true They’re the first seed catalog I’ve seen offering rootstock seed though I’m sure others have them too. (If you just wanted to try on a small scale this year, their shipping is pretty low so that’s nice too.) I have read you should start your rootstock a few days after your scion plants to try to have them the same size when you want to graft.

I saw that in their catalog. We grow hundreds of tomatoes and am wondering if the time and expense is worth it or can I graft them on big beef and have the same effect?

I would think any heirloom that’s very disease susceptible grafted onto a hybrid rootstock that has resistance to disease ought to be better than the straight heirloom. At least that seems to be the whole reasoning behind the grafting. If you try what you suggested I’d be interested to hear results!

Wonder how tomato’s would do being grafted onto a tree type.

A wild question, but I wonder if anyone has ever tried grafting two different tomato varieties together – not as rootstock and top, but trying to have both varieties produce. It would be good for people like me who love to try more varieties than they really have space for. . . .

One certainly could, but it would be far simpler to just plant the two varieties in the same hole.

I am going to try grafting tomatoes this year. It will always bother me if I won’t try it myself. Expensive rootstock seeds came yesterday from Johnny’s. They also included very good instructions how to graft tomatoes and how to care after them after grafting. I will try to save the tops of the rootstock, root them and then graft on them again. This way I can reduce the cost of the seeds.
The reason why I want to graft is that I have high disease pressure, foliar diseases mainly, but I also have wilting tomatoes later in the summer. Also our summers are usually hot and dry, so tomatoes do not set in the hot weather and also they crack badly. Rootstock might improve the situation due to disease resistance, better setting in the hot weather and better vigor later in the season, maybe less cracking too.
This will be the fun project anyways, so here it goes.

I ordered these clips from Amazon and the how to book was just a bonus. Same thing from Johnnys was double the price.

The clips are sold in quantities of 100-200, I just do not need that many. I will try to use my DIY silicone clips. They add the cost to the grafting, and I do not know if grafting has any benefits to me yet.

I will try to save the tops of the rootstock,

So my tomatoes are ready for grafting. They are approximately 1 month old. 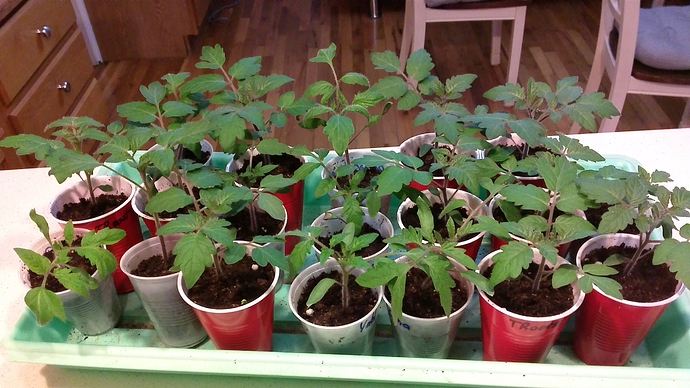 Rootstock are in red cups, the varieties are in white cups. Rootstocks are darker green and slightly larger then the average seedlings. 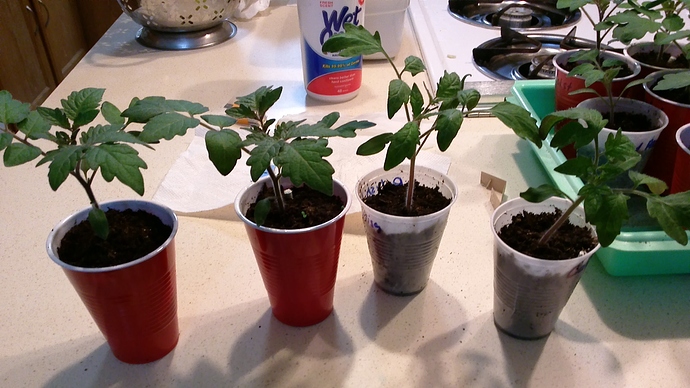 Here are my two first grafted tomatoes. I used DIY clips from silicon tubing and they worked fine. 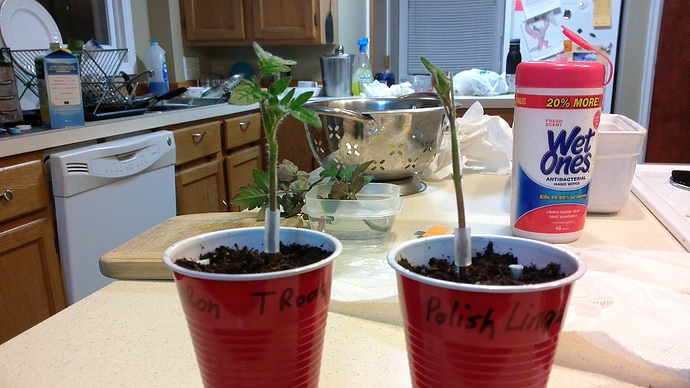 And this is my healing chamber. It is basically large plastic box with humidifier and heating mat. Now they have to stay inside for 3-4 days in the darkness. 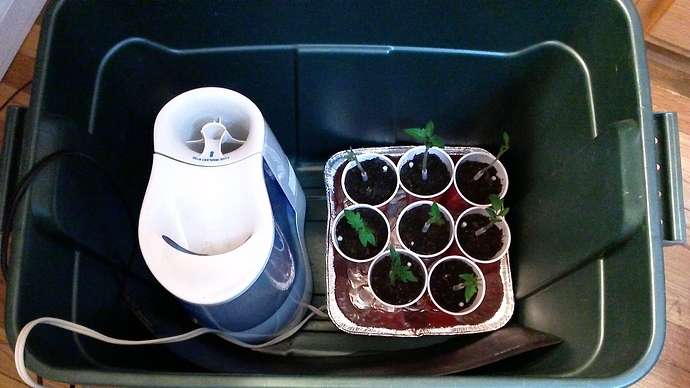 The grafting part was easy. Grafting trees is a lot more complicated process. I saved the tops of the rootstock and I hope that they can make roots. Now 4 days of waiting…

They look good. Hope they perform like your wanting them to.

Here is an update on my tomato grafting. NONE of them survived the procedure. This is very discouraging. They looked fine for a couple of days, so I was thinking that the healing is going fine and then at the third day they withered and slowly died. I tried different ways of grafting and none of them really worked. The tops of the rootstock that I saved are making roots, but I am not sure if I graft again since I do not have that many tomatoes to waste.

I didn’t want to hear that. Everything I’ve read makes it sound so easy. Keep us informed if you try again.